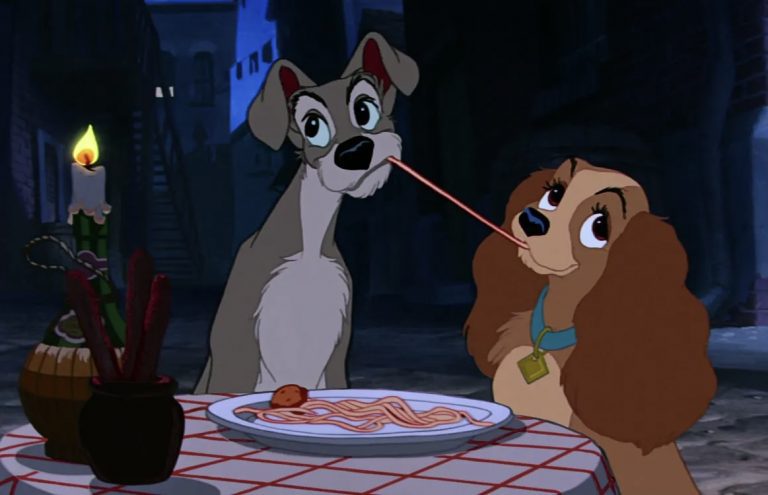 Food represented on the silver screen always make people hungry. Including in animated films, where food is depicted in many cult scenes from the Disney world and not only: here are some of the most iconic recipes.

Snow White’s gooseberry pie and Alice’s tea, The Sword in the Stone’s chicken and the Lady and the Tramp’s spaghetti and meatballs, to the famous ratatouille from the Pixar film of the same name, which caught the imagination of cooks and food lovers of all ages. Or Coco's tamales, Luca's pesto spaghetti, Encanto's buñuelos and Turning Red's edamame. Not to mention Miyazaki’s enchanted films, where food is ubiquitous as symbol of interaction and growth, and the DreamWorks that, since the 1990s, has given rise to two of the most beloved feature films for adults and children: Shrek and Kung Fu Panda (the latter was heavily focused on food, including steamed dumplings and the ‘secret ingredient’ noodle soup). Whatever the production company, food in animated films is gluttonous, mouthwatering, colorful, seductive. Fake and yet so tempting, perfect in its precise shapes, saturated colors, inviting appearance. There from the beginning, over time food has increasingly made its way into the animated cinema, sometimes becoming the real protagonist of the story, sometimes taking on deep meanings, key messages for the evolution of the characters, or, more simply, representing the everyday life of a family, of a territory, or a tradition. Now magical, now realistic, more and more detailed. 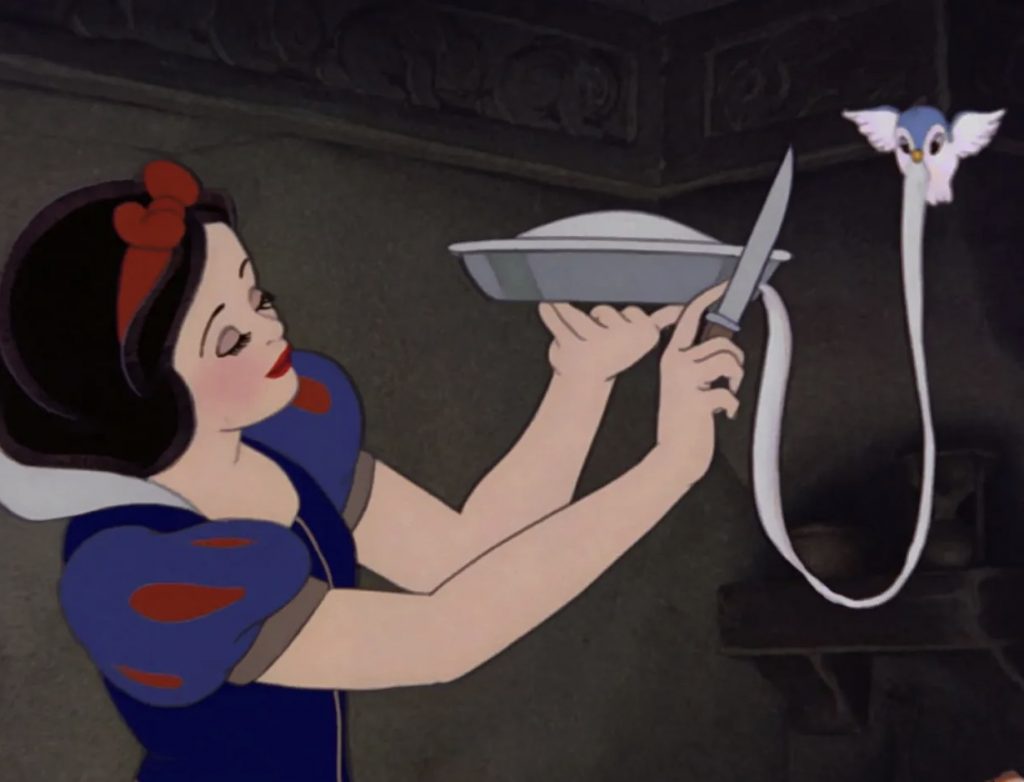 The earliest feature film bears the signature of Lotte Reiniger, who had been grappling with the creation of paper silhouettes since she was a child: in 1926 was released her black-and-white silhouette animation, ‘The Adventures of Prince Achmed’, a story inspired by the magical atmosphere of ‘One Thousand and One Nights,’ all elaborated with lead and cardboard manipulated cutouts. Charles-Émile Reynaud was behind this avant-garde movement, the inventor of the Théâtre Optique, a machine that allowed moving picture to be projected onto a screen through several mirrors, creating the background with a lantern. In the meantime, the Disney Brothers Cartoon Studio was founded in 1923: five years later, the animated series Mickey Mouse was launched ("It all started with a mouse," as Walt himself recalled many years – and successes – later), but real fame came in 1937 with Snow White and the Seven Dwarfs, that had a lifetime gross of $418 million across its original release and several reissues. Like it or not, Disney must be credited with the creation of an animation empire, thanks also to the theme parks (the first opened in 1955 in suburban Los Angeles) and related gadgets. It is impossible to list the most iconic food of the international animation world, so we will focus only on a few from Disney, which since 2006 also includes Pixar. 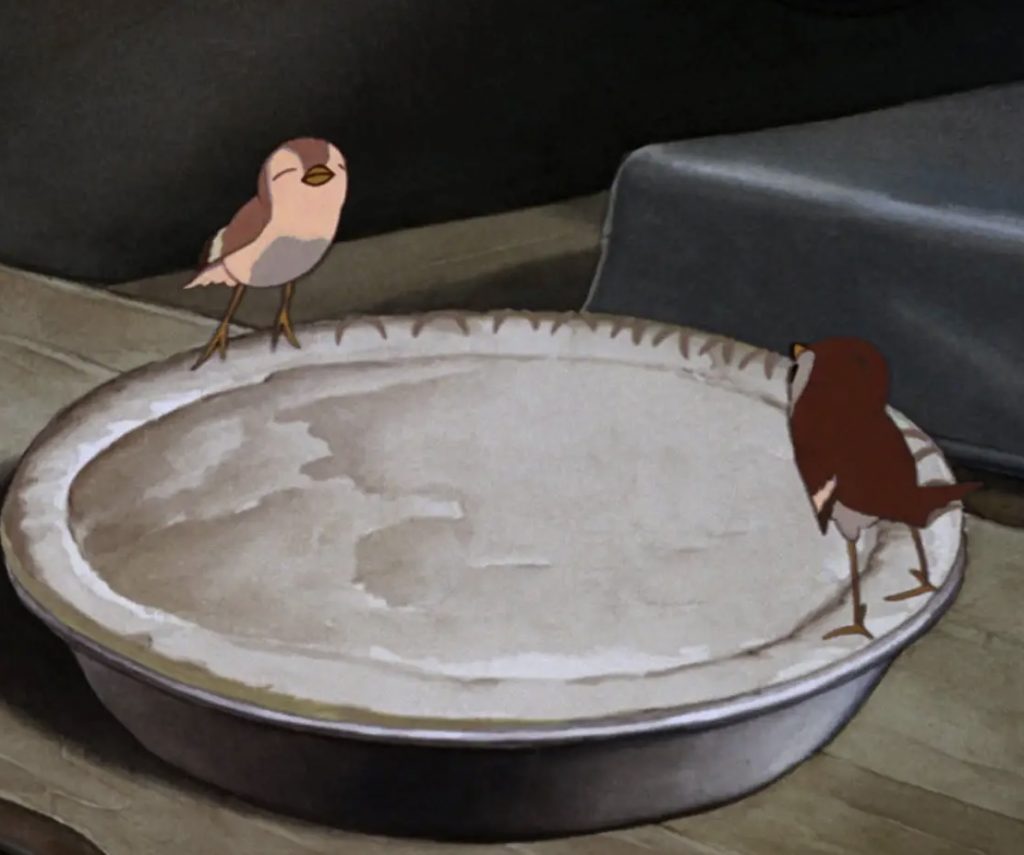 The story of the food-loving mouse that guides the garbage boy while cooking is the quintessential movie about cooking. Ratatouille showcases many tasty recipes, but the most famous is the one of the title, which arouses deep emotions in the feared fine-dining expert Anton Ego. Fun fact: Well-groomed, with an inviting look, the film’s ratatouille is quite different from the traditional mix of chopped vegetables cooked in a pot. Many say that it was Hélène Darroze, the entrepreneurial chef who trained with Alain Ducasse, who inspired the Pixar’s dish, while Luigi Cremona, the Italian expert taster also known abroad, is said to have contributed to the image of the food critic Anton Ego.

Lots of food is also represented in Luca, the 2021 animated film about the Italian summer of two sea monsters who turn into human beings when they dry off and love trenette al pesto. After all, already the 2018 short film Bao, which tells the story of a Chinese dumpling, foreshadowed the food’s leading role in Pixar’s films… 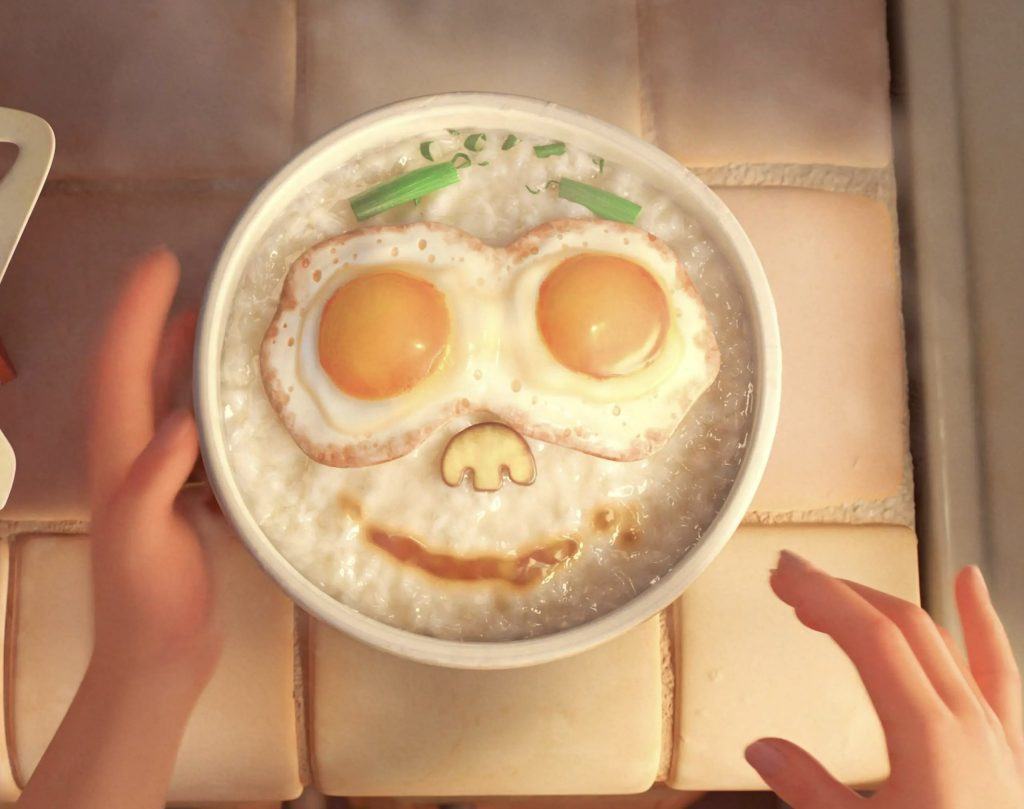 Encanto, Turning Red and the power of food

A few months after Luca, Encanto arrived in theaters: in a Colombian family in which each member is blessed with magical powers, Mirabel must come to terms with her ‘banality’. Food takes center stage in several scenes, representing the power of mom Julieta, who heals wounds through homemade dishes, such as arepa, a white cornbread, or buñuelo, a sweet fried dough fritter. 2022 welcomed Turning Red, Pixar's latest masterpiece that delicately – yet without sugarcoating it – depicts what it’s like to be a teenager, combining the hallmarks of Japanese anime with a more classic animation, without seeming anachronistic. Toronto, 2002: 13-year-old Mei Lee is grappling with her first crushes, her first physical urges (for the first time, menstruation is also mentioned), when, all of a sudden, she turns into a red panda. This happens because of her innermost emotions, frustrations, the power of feelings that in one of the most moving final scenes she decides to embrace. The food is typical of the Chinese cuisine, the family's home country, including dumplings, congee (the rice porridge already depicted in Mulan) and edamame, but there are also Canadian snacks and colorful beverages. More interesting is how food takes discreetly the scene. One detail that has not gone unnoticed among those with type 1 diabetes: the insulin pumps that some of Mei's classmates have on their arms. An element that eludes, yet it is present like many others and, therefore, extremely powerful, that helps take a step to normalize this little-known chronic disease. 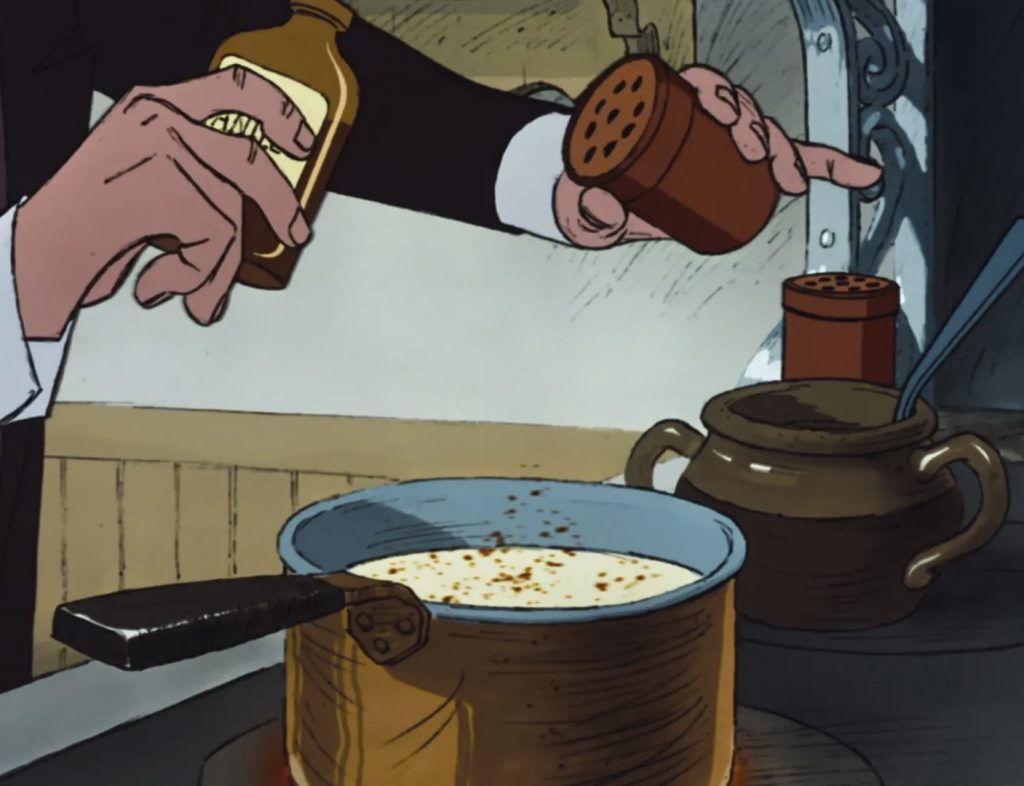 Disney classics: Snow White, Lady and the Tramp, The Aristocats

There are still plenty of iconic dishes to mention: the magnificent Tiana’s beignets and steaming gumbo from The Princess and the Frog, the Disney film set in New Orleans that follows a young woman who has dreams of opening her own restaurant; the Empire biscuits from The Brave; the cookies and hazelnut soup from Rapunzel; that weird-looking grey stuff from the banquet in Beauty and the Beast, accompanied by cheese soufflés, jellies and other baroque-looking delicacies; the leaning layer cake from Sleeping Beauty. Let’s make then a small selection from some of the most significant Disney’s eras, the so-called ‘Golden Age,’ ‘Silver Age,’ and ‘Bronze Age.’ Snow White's gooseberry pie is the first age’s most famous recipe, as well as the first ever to be depicted: a classic American pie for the grumpiest dwarf, Grumpy (you can see the name on top). Just before the witch peeks out the window, a cult moment that terrified generations of children. Silver Age: Here are the graceful images of Lady and the Tramp, starting with the candlelight dinner of shared spaghetti and meatballs. Considered as an insult to the Italian cuisine, the dish actually originated thanks to Italian emigrants to the United States, who could afford very little: spaghetti and canned tomatoes, and with any luck the less prized meat cuts such as mince, to be added to the sauce to make it heartier. Finally, The Aristocats, a 1970 hit that revolutionized the way animation was made, starting with the centrality – and diversity – of the music, the characterization of the characters, even of the secondary ones that are now considered on a par with the kittens, Thomas O’Malley's easygoing tone, and the constant artistic references. And the evil butler Edgar's crème makes your mouth water, namely a custard to which nutmeg, cinnamon and vanilla are added (his recipe also calls for sleeping pills to put the unfortunate people to sleep). Enjoy it warm and with large shortbread cookies. Pour the milk into a small saucepan, add the vanilla bean split lengthwise and bring it slowly to a boil. Combine the egg yolks and the sugar in a bowl and whisk them with a wooden spoon for a few minutes, until the mixture will become lighter in color. While stirring, trickle the hot milk, then pour the mixture into the milk saucepan and let it thicken over low heat or, better yet, over a hot but not boiling bain marie. In fact, the custard must thicken without reaching a full boil that can cause it to curdle, resulting in a lumpy mixture. While cooking, stir constantly and, once ready, it will form a veil. Pour the custard into a bowl set in a large bowl of water and ice. While cooling, stir often to prevent a skin from forming on the surface.

100g sugar (icing sugar for a crumblier and finer dough)

Sift the flour into a large bowl, make a well and add the soft diced butter, stir in a pinch of salt and rub in with your fingertips, until the mixture resembles fine breadcrumbs. Make a well again and place the egg yolks, sugar and lemon zest (only the yellow part) in the center. Quickly knead again the ingredients, until the dough becomes to come together. Cover it with plastic wrap and refrigerate in the least cold part of the fridge for at least an hour. Roll and shape the dough with a rolling pin on a lightly floured surface. Then form the pastry into discs with the help of a pastry ring and bake for 12 minutes at 180°C. 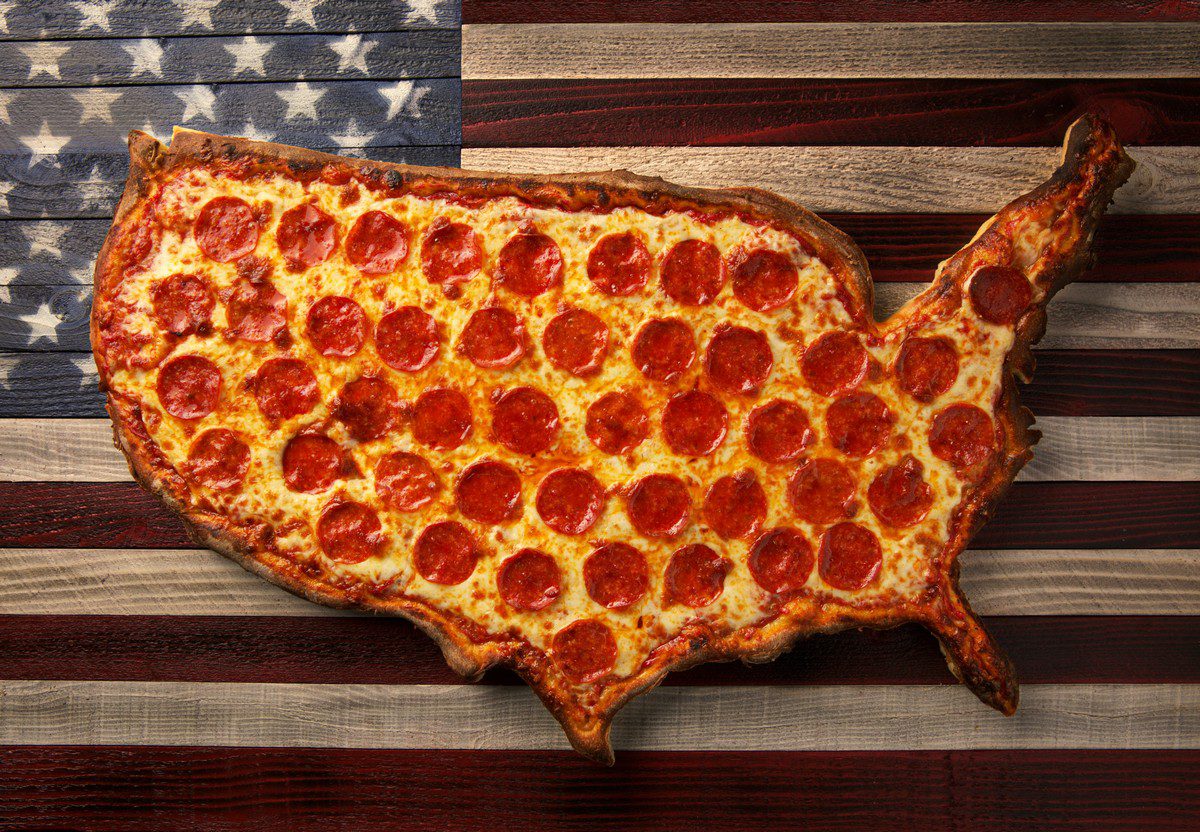 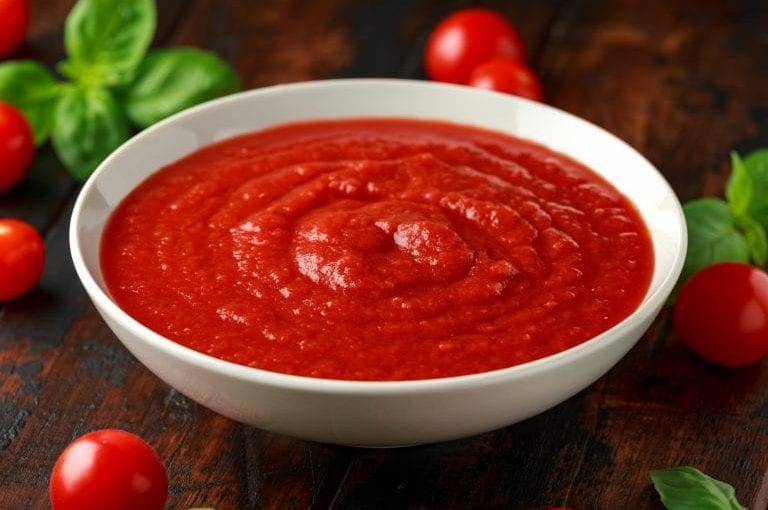 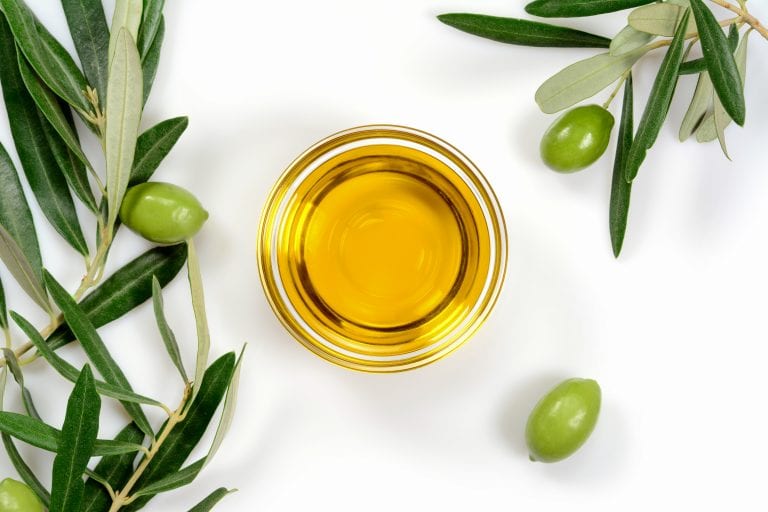 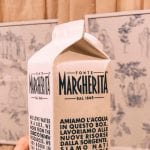 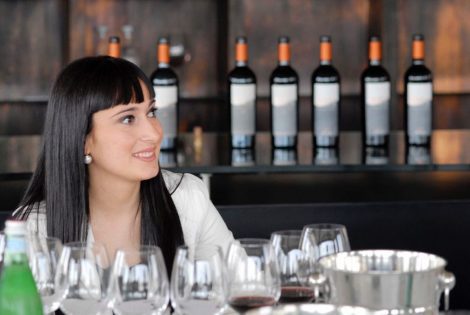 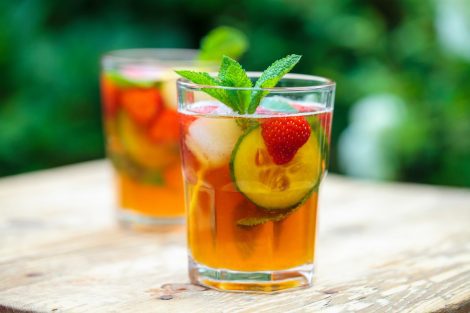