Spaghetti and meatballs: history of the American dish whose roots are in Italy 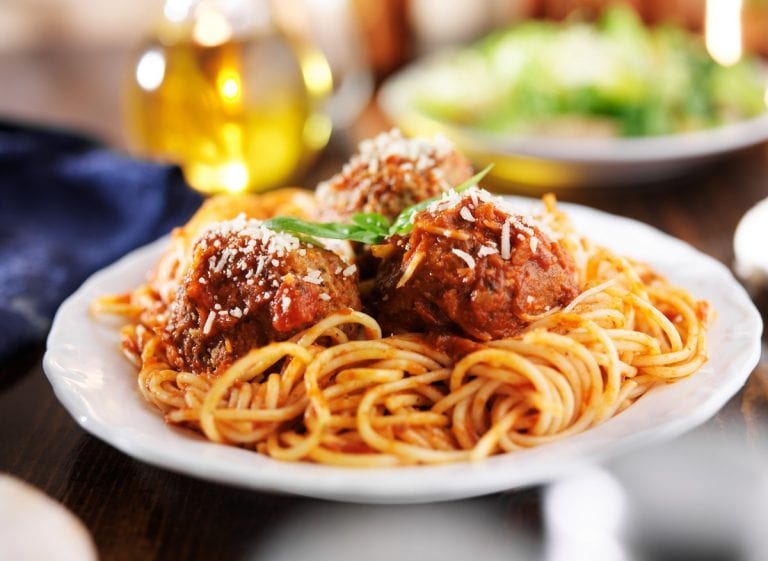 How are the famous spaghetti Lady and the Tramp loved born? This is why spaghetti and meatballs are so famous in Italian restaurants in the United States.

Spaghetti and meatballs: is it really an insult to Italian cuisine? For years the famous (or infamous?) spaghetti and meatballs, ubiquitous in the United States, especially in Little Italy restaurants, have represented one of the many false myths of Italian gastronomy abroad, like fettuccine Alfredo, which are actually very Italian, born in Rome thanks to Alfredo Di Lelio in 1908 in his mother Angelina’s restaurant in Piazza Rosa, where Galleria Alberto Sordi shopping hall stands today. The popularity of the dish, in this case, came a few years later thanks to the meeting with Douglas Fairbanks and Mary Pickford, silent film stars who tasted the dish in the restaurant in via della Scrofa opened by Alfredo in 1914. A similar case, albeit with the necessary differences, is spaghetti with meatballs, made famous by the 1955 Disney classic “Lady and the Tramp.”

Spaghetti and meatballs, the dish of Italian emigrants to America

For many Italians, in fact, spaghetti and meatballs are an unthinkable combination, acceptable only in the animated film famous for the romantic dinner scene between the two pups sharing a plate of pasta to the notes of “Bella Notte.” Yet, the recipe was already known many decades earlier, in the early 20th century, the years of Italian emigration to the United States. The Italians in search of fortune in the Big Apple were very poor, they could afford very little and spent most of their savings on food: spaghetti and canned tomatoes, no doubt, among the cheapest foods of the time. Then job opportunities, the warm American welcome and some extra money allowed them to begin to taste the meat in America, certainly more available than in Italy, starting from the less valuable cuts: minced meat, for example, with the lowest cost but a tasty flavour, especially when mixed with other ingredients and transformed into delicious meatballs. To add to that simple tomato sauce, to enrich the dish and create a more substantial cuisine that was however by no means opulent.

Spaghetti and meatballs in Italy

Spaghetti with meatballs, as we know them over the years, seem to have been born in this way, among the American favourite pasta courses, even if the combination of meatballs and pasta actually has much older roots in Italy, especially in a number of regions. Abruzzo, for example, where spaghetti alla chitarra marries perfectly with “pallottine.” A pasta noodle that comes to life thanks to the wire strings stretched on a beech wood frame, called chitarra (guitar): the result are square section spaghetti, about 30 centimeters long, seasoned in various ways, traditionally with pallottine, beef or lamb meatballs in sauce which enrich the egg pasta, as well as the Teramo-style timbale made with scrippelle (a kind of crêpes, Abruzzo-style). Also in Campania it’s common to find meatballs together with egg pasta, lasagna in the first place, and then a must in the sartù, a rice casserole with meatballs, boiled eggs, peas and chopped mozzarella. It’s no coincidence, then, that emigrants coming mainly from Central and Southern Italy, starting from Abruzzo and Campania, should invent spaghetti and meatballs.

Birth of the meatball

In short, a not so new dish for Italians (it seems that originally the meatballs were much smaller than those prepared today in Italian-American restaurants, more similar to Abruzzo’s pallottine), but modified in America, so much so that it soon became one of the most popular recipes ever. Perhaps even this novelty has led over time to the creation of a day dedicated to meatballs, National Meatball Day, celebrated in the United States every 9th of March.

There is no certain information about the origin of these tasty balls of ground meat, but the most accredited theory had them born in Persia: kofta (meatballs typical of the Middle East) probably derives from the Persian koofteh, meaning “pounded meat.” They first spread to Middle Eastern countries and then to Arab states, which brought them to Europe with the occupation of Spain. A primordial version of meatballs was already prepared in Rome, Apicius called them omentata esicia but it was rather a round dough made with red wine, myrtle berries and garum, wrapped in the omentum, pork netting.

Although meatballs and pasta courses with meatballs have existed for a long time in Italy, the version of spaghetti and meatballs in the collective imagination (of the animated film, so to speak) remains a specialty of Italian-American culture, not known––nor appreciated––in the Italian Peninsula.