The new Copenaghen kitchen of Redzepi and Schmidt 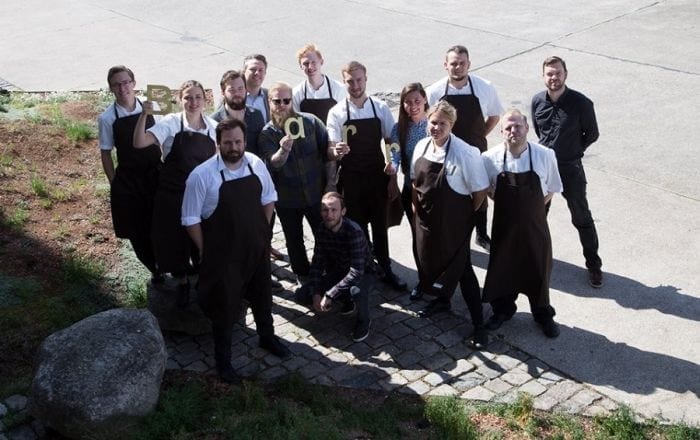 A classic cuisine to promote the traditional recipes from Norther Countries. Redzepi, together with Thorsten Schmidt, changes the old Noma restaurant and creates a convivial kitchen.

“Dear friends, we have been talking with René for years about creating a new restaurant format in Copenhagen. We were looking for the perfect space and we finally found it in Noma, on the seafront that is the city’s symbol.” The writer is ThorstenSchmidt, René Redzepi’s new business partner. And just where we celebrated the last act of the Noma we knew a few months ago, Barr has opened its doors.

From July 5 customers can sit at the tables of what will “not be the umpteenth Nordic restaurant.” René’s colleague and friend, Thorsten Schmidt, is one of the best known representatives of Danish cooking, chef of Malling&Schmidt in Aarhus, but at Barr (the two have been planning the project for over a year), their intention is to allow the culinary traditions of the North Sea, from Scandinavia to Benelux to Great Britain, to have their say. The approach is a menu that celebrates sharing and conviviality.

The restaurant’s name is inspired by an ancient Irish word for harvest, as well as by a forgotten Scandinavian word used for barley, the principle ingredient in beer production. Barr’s focus will be on the traditional cooking of the colder countries as well as on beer, with foods ranging from Danish meatballs to meat cutlets, carefully prepared to showcase family recipes. “Welcoming, comfortable and delicious” are the adjectives that describe a place that “you’ll want to visit often with friends and family.” Redzepi and Schmidt’s past will certainly influence their experimental approach to the most typical and ancient foods of their zone, and pairings with a wide selection of beers and spirits will be a major element. Open for dinner as well as lunch on the weekend, Barr will welcome 60 at its tables and about 30 more at its counter.