Steven Raichlen grills Italy. The king of barbecue on filming with Gambero Rosso 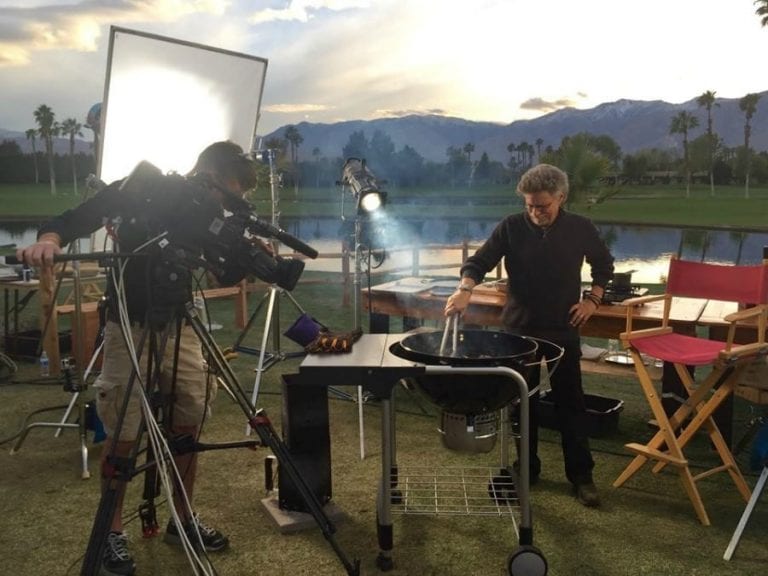 Ex-food critic, TV personality, above all a lover of fine dining and a passionate cook, Steven Raichlen has found in grilling his best means of expression. Filming of his new TV programme of Gambero Rosso Channel is concluded. The show will air March 2018. Weasked him about the experience.

“I had heard about the renowned Fiorentina steak and when I started taking in interest in grilling, I travelled to Tuscany to taste it”, This was only the beginning of a long journey of discovery of Italian cookery, because Steven Raichlen first landed in Basilicata: “Walking in the small hilltop villages I noticed a great number of fine butchers. Grilling is a homespun practice that’s not very common in restaurants. But it is nonetheless widespread, and it’s delicious”. Last April, the US grilling guru described the Italian barbecue tradition as, “a hidden art form.” Let’s discover it with him.

Steven and Gambero Rosso Channel (number 412 on the Sky platform) have developed a new project. A TV programme that focuses on Italian ingredients grilled and cooked by Raichlen “without changing their local nature”. Filming kicked off less than a month ago and several Italian regions were visited during the shoot. These are places where Steven discovered typical products and recipes and gave them each a personal touch, with the utmost respect in regards to local tradition. The cameras were finally switched off November 1st. We asked the star to give us a few sneak previews.

This is the name of the programme which will air March 2018. The king of BBQ will be grilling in Italy, challenged by strong, deep and ancient gastronomic tradition. One that’s so ingrained that it can sometimes become a limit. But not in this case: chef and Italiab artisans, fishermen and cattle breeders all showed enthusiasm for this juxtaposition of such a diverse and equally consolidated culinary tradition as American grilling. “The filming tour was fantastic, I visited Goro and Codigoro fishing eels, then I was in Polesine Parmense visiting pig farms, in Venice at the Rialto Market for an assortment of grilled polenta, and in Portofino grilling the fresh catch of the day”. He was also in Florence tasting the Fiorentina steaks of Luciano Ghinassi, in Cuneo discovering the secrets of grilled lamb with Eric Barin, “one of the chefs that I was most impressed with”, andin San Candido, near Bozen, where he learned how to perfectly cook venison with Markus Holzer.

The team and filming locations

Raichlen worked with a group of great Gambero Rosso Channel filming professionals, “a team of very creative and skilled pros. The angle of the programme is unusual, the idea is very original and I believe the results will be very interesting”. The shooting schedule brought the crew to many big and small Italian cities of central and northern Italy, “from the lagoon to the mountains, spanning fro the Alps to the hilltops. Italy is the sum of enchanting landscapes. Filming in such beautiful surroundings was deeply stimulating”. What was the most beautiful city according to Raichlen? “Venice, for sure. It’s a magical place and I intend to return with my family, who has joined up with me after the end of the shoot”. The programme will be entirely shot in English language with Italian subtitles, “save for parts in which I attempt speaking in Italian with the locals”.

Among the most significant experiences that Steven will keep in his filming memories, the biggest will be when he went fishing for eels: “I had already tasted grilled eel, but never in Italy. I tried them first in a local recipe, simply grilled with some salt; then I grilled them my way brined in teriyaki, as a homage to my Japanese origins, plus a splash of vin santo”. The Italian version was grilled by chef Maria Grazia Soncini of restaurant La Capanna di Eraclio, in the Bassa Ferrarese area. “She is a talented chef, who leaves – like the majority of Italians – flavours intact and pure without too many condiments”. Soncini also showed Raichlen how to cook veraci clams, which he reinterpreted as a pizza topping, “fire grilled directly, without a stone”. Any other unusual recipes? “Venison, which was brined in red wine and swaddled in strips of guanciale, then spit-roasted”. He also enjoyed the octopus salad prepared by chef Lorenzo Cogo of restaurant El Coq in Vicenza: “In Italy salads are usually served as a side dish. In the US on the other hand, we’re accustomed to serving it on the same dish as the entrée, for this recipe I chose to use a piadina flatbread, filled with eggplant and grilled octopus. The result is a unique dish”.

Grilling in Italy vs. USA: differences and similarities

No sides and lots of sauces, this is the basis of American-style grilling and barbecue – which is very different from the Italian concept, which focuses instead on very few ingredients. “In Italy, foods are grilled using only a thread of extra virgin olive oil, salt and sometimes a splash of lemon juice. I tried to mediate between the two different techniques and traditions: on Fiorentina steak, for example, I added sweet peppers sautéed with olive oil, garlic and some chopped parsley”. The grill in Italy is nothing but meat over the fire, with no added condiments: “In addition to herbs and spices, in the US we’re very into the Maillard reaction; we like our meat to be well seared and dark on the outside. Italians, on the other hand, use less heat while grilling”. Among the many cultural divergences, there is one common point: the wood. “We make large use of a chimney. During the filming tour for example Massimo Spigaroli of Antica Corte Pallavicina prepared firewood grilled duck, and it was exceptional!”

Tireless traveller Raichlen between looking up restaurants and filming his show had time to visit sites such as Pinacoteca di Brera and the Duomo in Milan, travelling back to Venice and Florence, and finishing his tour in France before returning to Miami and his many projects. “In Italy there’s always so much to learn in regards to cookery and cuisine. The culinary biodiversity is staggering, I’m always impressed.  I tasted zucca mantovana pumpkin, red mountain potatoes, Chianina beef, lamb called sambucano, cannolicchi crustaceans and many other extraordinary specialties. What can I say, I can’t wait to be back”.