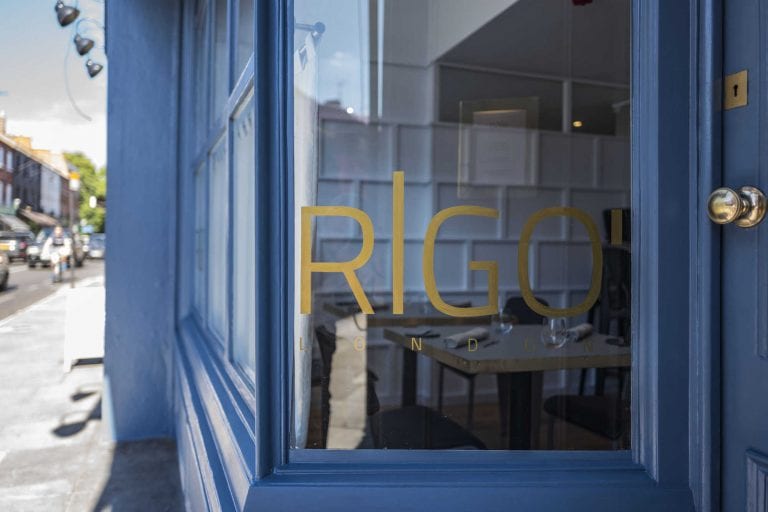 Rigò is an Italian enterprise in London. The fine dining venue only opened a few months ago, but has immediately garnered the Italian Three Fork rating by Gambero Rosso, as the best new opening of 2017 on the Top Italian Restaurants guide that rates the best Italian restaurants around the world. Being simply labelled as […]

Rigò is an Italian enterprise in London. The fine dining venue only opened a few months ago, but has immediately garnered the Italian Three Fork rating by Gambero Rosso, as the best new opening of 2017 on the Top Italian Restaurants guide that rates the best Italian restaurants around the world. Being simply labelled as an “authentic Italian restaurant” is not what chef Gonzalo Luzarraga is after. He has been working around the world in search of culinary inspiration; his Italian mother from Cuneo has allowed him to deeply investigate this native Piedmont despite his Hispanic name. The chef considers labels like a limitation to creativity, preferring to investigate locality of an area, and focussing on stories and products beyond rigid parochial constraints. The result is an absolutely personal approach, both drawing from childhood culinary tradition and personal experiences matured in the far corners of the world – from unchartered parts of South Africa to the remote regions of Russia – and a phenomenal training Grand Tour that has taken him from Alain Ducasse to Walter Eynard, plus China, Japan and the Maldives.

With his partner Francesco Ferretti, Luzarraga’s impact with London was initially a rough one: “Until quite recently I did not love London, I kept experiencing it as a pass-through tourist, and only understood its more superficial aspects. Then I found myself working with a colleague at an Italian restaurant start-up, where I worked for 6-7 months. That’s when I finally understood the substance of those who – aside from the big names – fully take advantage of local products”. Not everyone seek human contact with farmers and producers in the British countryside “an aspect that we Italians are more inclined towards. Surprisingly I found that same inclination here too: London does not possess a cold personality.” His focus on sourcing quality ingredients has always been important. From the launch of the new London restaurant, he has been around seeking “those who produce soul-first”. On Sundays, when the restaurant s closed, he travels around in search of quality goods and people. Think moss and mushroom pickers from Scotland, lamb farms for “extraordinary quality” milk, and produce farmers in the city outskirts. Traditional restaurants don’t even do this sort of supply network. Luzarraga adds to this constant research in Italy too, naturally. “I actually wanted to open in Paris, now I’m happy to have chose London instead”. Behind this choice is also a careful entrepreneurial evaluation in regards to profit margins offered by London, “it doesn’t surprise then that many attempt making it here, like David Munoz for example, who is doubling his StreetXo offer. It’s important to comprehend the local dynamics of work: rhythms are different here, personnel shifts are shorter, business hours are reduced and service needs to be further optimized. This makes it easier to focus and work with precision. Those who invest in quality have better chance of profit”.

In the kitchen at Rigò are 7 brigade members working with frequent rotations. The room seats 30 guests and is masterfully managed by young Federico Dadone, experienced sommelier who has collected many small biodynamic wine producers from Italy and the rest of the world for an original wine list boasting a fine rough wine backbone along with classic and precious labels to complement: “We focus very much on pairing, and we’re very proud of this”. Merit for the restaurant’s success is the way the team works together. Only a few months after opening, the local restaurant critic scene is already generous with the Fulham venue, and customers are lining up in throngs. Initially patrons were only Italians and French, now there’s an international clientele from all over the world, “now among locals we have quite a number of loyal aficionados”. Everyone seems curious to taste Gonzalo’s cuisine, whose latest experience in Italy was at Le Clivie in Piobesi d'Alba and Marachella in Cherasco. His culinary offer, according to him, would not be as successful in Italy: “My cuisine is very personal, at the core of which is Italy, with technique and bases acquired with Ducasse, and all the best I absorbed around the world”. In Russia, for example, he learned to re-evaluate side ingredients, restoring in them dignity – like for potatoes. On his menu is also a dish made with ox bone marrow and caviar, “which I would never think of offering in Italy”. The idea is approaching ingredient transformation with freedom: “My love for fermentation comes from Scandinavian northern countries, Asians have taught me how to handle Italian products, in Japan I acquired knowledge of umami, in the Maldives I learned about the milder use of spices in a reinterpretation of Indian cuisine”. And let’s not forget the chef’s origins: “40% of the products we use in the kitchen come from Italy, such as piennolo tomatoes and artichokes from Albenga, garlic from Vessalico, and Acquerello rice”.

The succinct à la carte menu offers 5 hors d’oeuvres and 5 main courses, 2 pastas, like Cappellacci with fermented onion and Parmigiano Reggiano aged 36 months – or a 6òdish tasting menu that reflects Gonzalo’s journey from childhood to the present day, such as his Noci e caviale, a traditional dish of the Black Sea he discovered during a vacation visiting his girlfriend’s parents, on the Rigò menu it’s a dish of fermented walnuts and herring caviar. For the desserts, the choices are carefully developed: Creme brulée with chestnuts, porcini and black sesame; or Persimmon and amazake (fermented Japanese millet); and Foresta Nera with organic chocolate Original Beans and wild Scottish cherries. Instead of dessert, customers can opt for the Piedmont cheeses of Franco Parola. What’s the biggest risk? “When you tell people you’re Italian, many expect the Italian stereotype. Why can a Chinese chef cook Italian food, and I can’t propose something original?” For Gonzalo, same goes for Italy, “where out of the ordinary cuisine is not easy to propose. A place like this could probably work well in Milan, maybe in Turin”. Good examples of this? “I like Yoji Tokuyoshi very much, he’s had the courage to apply Japanese aesthetics to Italian cuisine. Then there’s Max Poggi in Bologna, he’s also working on unchartered territory in an otherwise traditionalist setting. In Milan there’s also Eugenio Boer, who’s doing very interesting things”. In London, where does he like dining? “I’m a fan of Isaac McHale at The Clove Club. I see much of the Italian sensibility in regards to valuing local products in his cuisine. I also like Luca’s britalish idea developed by the team. There’s also The Kitchen Table at Bubble Dog. For Italian food I go for the pizza made by Matteo Aloe, at Radio Alice, for meat I head to Macellaio. I like the Italian cuisine at Harry's Bar, less so for its partners”.