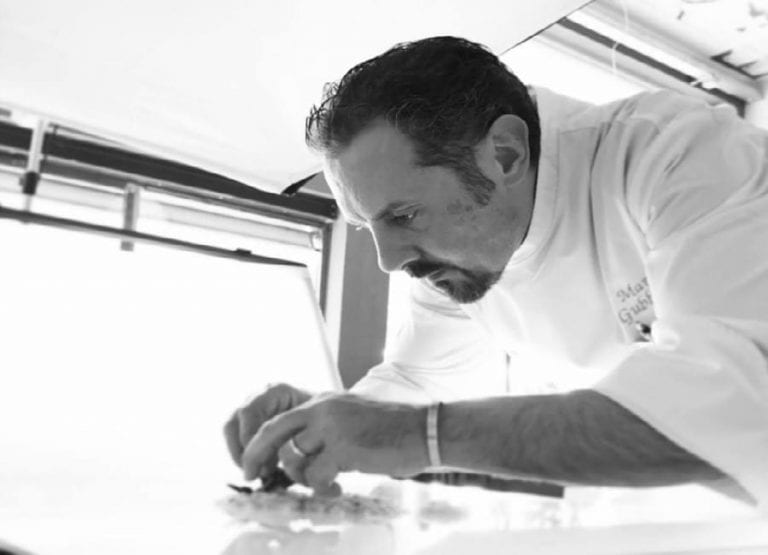 When strong agricultural tradition meets experimentation and contemporary taste, cucina is enriched by emotion and a different way of seeing. In this region, excellence is an everyday matter and the habits of genuine flavor risk being undervalued. Marco Gubbiotti offers the ancient flavors of his Umbria in a modern key.

Born in 1971, Marco Gubbiotti knows his home territory intimately. Umbria is a region with rich traditions tied to its soil and agriculture. It has many gastronomic treasures and fine chefs. The force of the past is powerful, shaping both work in the kitchen and visitors’ expectations. Marco, who trained first in hotel school and then in the kitchens of fine local cooks, praises his Umbria and has developed a vision of the land in which he lives, an interpretation which he offers his clients.

He explains how he trained “in the kitchen of Igles Corelli, Bruno Barbieri and Mauro Gualandi during the last season of Trigabolo in Argenta. I realized that cucina was something different from what I had learned. That’s where I began my true professional and creative adventure. Then, cooking in Villa Roncalli, in Foligno, alongside Sandra Scolastra, I understood how tradition can express itself in different ways, be more modern and creative, closer to the sensibilities of those who interpret it.” The lessons taught by chefs Gianfranco Vissani and Marco Bistarelli are not far from that mentality. In 1998, Gubbiotti headed the kitchen of Bastiglia in Spello, one of the most intense periods in that beautiful complex. “Step after step I began to shape my cucina, using products from my own territory, but also other excellent Italian foods. In 2002, another important experience for me was to work with Pascal Barbot, chef at Astrance in Paris. He is passionate about Asian and fusion cooking. From him I learned what simplicity and clean flavor means to a dish.”

After winning a Michelin star in 2004 at the Bastiglia, positioning the Spello restaurant in 67th place among the best restaurants in the world, Marco began to think about a project of his own. In 2011, together with some friends, he founded Cucinaa Progetto Gastronomico. “This is a 360-degree kind of place. Together with a young and very well-trained staff, I can continue to plan and create. There’s a shop in a contemporary style, a sort of gourmet bazaar, we do tasting and cooking courses, catering of various kinds and for different occasions…” Consulting for the Il Milione restaurant in Hong Kong is the chef’s most recent satisfaction.