Italy in New York: the Rossopomodoro spin-off, the wines at Fausto, and Bologna foods at Lucciola 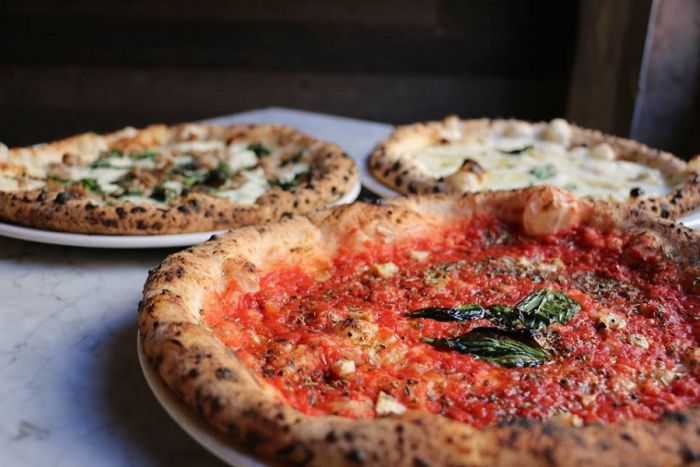 New York has always loved Italian pop culture and cuisine, but recently it is being supported by key figures, projects and authentic products with an ever-increasing list of new openings.   The recent opening of Trapizzino by Stefano Callegari, and Gino Sorbillo's pizzeria, plus local interpretations such as Mark Ladner's fast food pasta joint, pizza […]

New York has always loved Italian pop culture and cuisine, but recently it is being supported by key figures, projects and authentic products with an ever-increasing list of new openings.

The recent opening of Trapizzino by Stefano Callegari, and Gino Sorbillo's pizzeria, plus local interpretations such as Mark Ladner's fast food pasta joint, pizza and Roman fried goodies by Denny Meyer, as well as the Pecora Bianca teamwork offer sensational opportunities to dine all-Italian in the city that never sleeps. Pizza and pasta are obviously in the lead. In this diversified offer are the Roman-style pies of Marta e Martina, Camillo's pinsa style, and Callegari's famlous stuffed pizza triangles. But it's Neapolitan-style pizzas that play the starring role. Even Eataly, since its first opening at the Flatiron in 2010, has chosen to partner with a solid pizza pillar, Rossopomodoro of Gruppo Sebeto, whose New York first opening happened right after the pilot opening in Naples, Florida. Rossopomodoro launches Simo Pizza Following the Fifth avenue opening in 2014 was the first independent Greenwich Village venue and then a second within Eataly, with the Downtown opening in 2016. Coordinating operations is Simone Falco, nephew of owner Franco Manna, and direct proprietor of the Village joint. Born in 1974 in Naples, he is now a New York resident. In the next few months Falco will soon open a spin-off of Rossopomodoro called Simo Pizza. These will be two distinct pizzerias, the first of which will be operational in a few weeks. The popular pizza will be availabile in the Meatpacking District and in Downtown Brooklyn (the latter will open in the summer of 2018). On the menu only 4 pizza choices: Margherita; marinara; pepperoni and arugula & mushrooms. Salads for those not interested in pies, and gelato for dessert. Prices are affordable, all pies are sold under $10 and the formula is easily replicable – one that's due to become a chain “with no compromises in regards to quality”. Fausto's Italian wines In perfect balance between Italian decor, menu and wine list and the Italian origins of Joe Campanale (mastermind behind Dell'Anima, L'Artusi and wine bar Anfora), is the newly opened Faustoin Park Slope. With sommelier training, Campanale launched the project along with Erin Shambura, chef at L'Artusi, and a deep focus on wine, pairing it to traditional Italian regional cuisine, such as linguine with clams, to Veneto bigoli with duck ragout and Piave, or potato-filled ravioli and lamb chops with salsa verde. On the wine list are small wine makers from Abruzzo, Sicily and Campania, plus a handsome amaro mixology offer. Decor also plays a huge part, with wood panelling, leather sofas and marble surfaces reminiscent of old school Italian restaurants. In the lower floor wine lovers will find a surprise, a cellar with a private tasting room seating 25. Lucciola All-Italian Lucciola – whose name is a homage to filmmakerPupi Avati – is a fine Bologna restaurant owned by Michele Casadei Massari (chef), Alberto Ghezzi and Gianluca Capozzi (among the partners also Luca Filicori of Filicori e Zecchini in Bologna). The interiors are designed by another Italian native living in New York – Salerno native artist Marco Gallotta – wallpaper, wood, metal and glass are the materials used for the original urban setting. The menu is classic and focuses on pasta and Eighties dishes, with dishes such as penne with a creamy vodka sauce, and pumpkin gnocchi with gorgonzola. And the ubiquitous lasagne alla bolognese. Simo Pizza | New York, NY | 90-92, Gansevort Street | opening soon Fausto | New York, NY | 348, Flatbush Avenue | www.faustobrooklyn.com/ Lucciola | New York, NY | 621, Amsterdam Avenue | https://www.facebook.com/lucciolanyc/