Giuseppe D’Aquino, from Lake Garda to the world 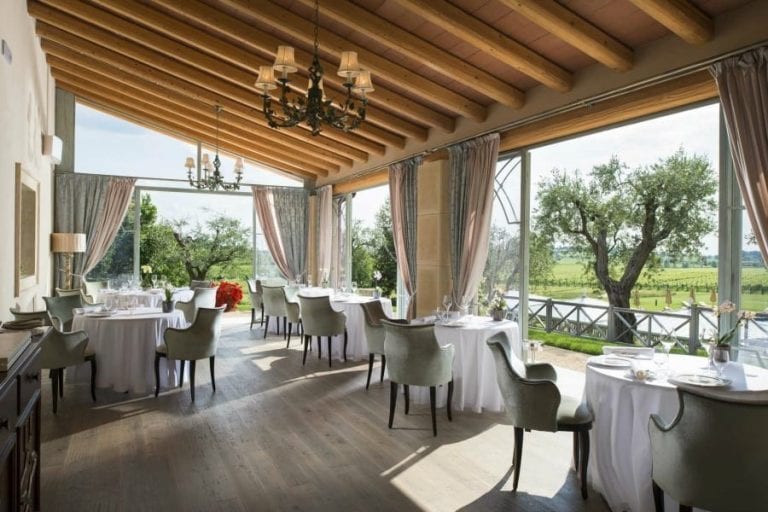 Giuseppe D’Aquino is a chef from southern Italy, but he breathed in a great deal of French and American air before settling in the hills that dominate Lake Garda. At the wine resort, Villa Cordevigo, he leads the kitchens of L’Oseleta. From here he looks out at the world with a Mediterranean soul and modern curiosity, aiming for the best.

“My kilometer zero is the world”

L’Oseleta is not a place for ‘cucina tipica’. It is where half of Europe and much of the world comes together: Italians and Germans, French and Americans, Asians and Africans, largely business people who travel the world on global matters. “Mine is a kilometer zero kitchen, but here zero means the world,” joked Giuseppe D’Aquino. For seven years he has been executive chef in the romantic 18th century Villa Cordevigo. Right after earning a diploma in industrial technology, he turned to working in kitchens. After an early experience on the Amalfi Coast, he traveled to the United States and then to Dubai. In France, in the 1990s, when French cuisine was at its height, he worked at Senderens, at the L’Opera kitchen in the Hotel de la Ville, and twice spent time with Ducasse in Monte Carlo. During this fifteen-year period, Giuseppe absorbed basic premises: the importance of choosing ingredients, the planning and coordination behind the kitchen brigade, and a respect for roles. “These are bases for best expressing what I am,” the chef explained. When he returned to Italy, he applied those premises to a marvelous palate of top quality Italian (and other) products. “My objective,” he said, “is to attain simplicity, excellence and uniqueness in each dish. I focus on seasonality, on the immediacy of ingredients, and on being in touch with the times. That’s my cucina.”

In the dishes he presents to Gambero readers, Giuseppe demonstrates the key concepts of his work. Spaghetti with piennolo (air-preserved, hung) tomatoes and red mullet are both explosive expressions of Italian flavor and its Mediterranean origins. “I develop my cucina based on the entire Italian territory but also on modern techniques of cooking and preparation that enhance flavors and aromas,” affirmed D’Aquino, refusing to be easily categorized. “Spaghetti represents simplicity. It is the indelible record of my childhood. The key dishes of our history were built with incredible ingredients, even though some were leftovers, like the liquid from anchovies, and some were ordinary, like the lemons that give the right acidity,” Giuseppe continued. “Red mullet when cooked keeps its colors intact. It still feels alive in a sauce full of sunlight, one that seems to have been created at the start to keep the mullet company.” Foie gras and chocolate, however, are the more French and international part of the chef, but he doesn’t hesitate to color them with a touch of the Mediterranean.