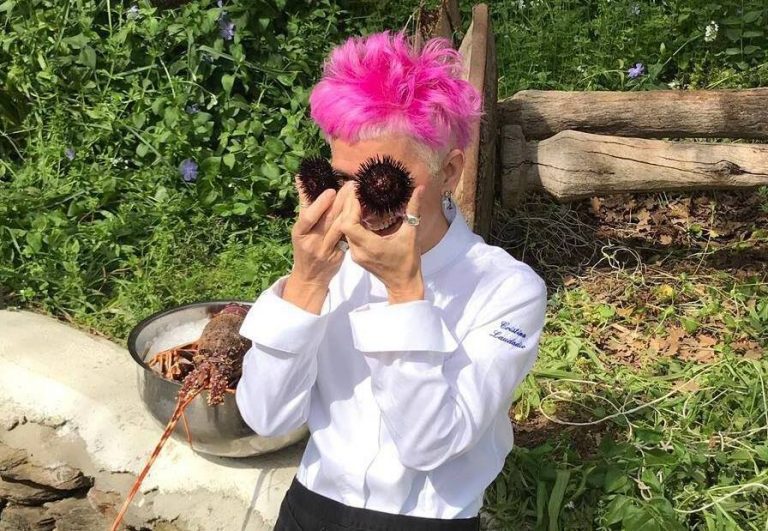 For the column promoted by the Gambero Rosso Foundation and dedicated to women, we're interviewing Cristina Bowerman of Glass Hostaria.

The Gambero Rosso Foundation, created with the aim of bringing attention and emphasis on social and research issues, carries on this column dedicated to women with dedication, not so much because we believe in women's quotas but because it is essential to talk and raise awareness on gender equality. And it is equally essential to be spokespersons for women who have achieved important goals in their sector. Today we're interviewing Cristina Bowerman of Glass Hostaria.

In your professional experience, what obstacles did you face as a woman?

This is a question that can be safely asked to any woman who has attempted to penetrate a male-dominated professional field. It's not just true for chefs but for surgeons, politicians, astronauts and many, many others. In a professional field in which, starting from the gender assigned to the name of the profession, the common thought is linked to a male figure, it becomes really difficult for each of us to be taken seriously. Moreover, especially in Italy, gallantry involuntarily (often) transmits a professional devaluation of the woman: you too will have found yourself more than once in front of the famous introduction "....Let me introduce you to the beautiful and kind..." instead of being addressed as "competent" placing the professional figure in question on an inferior level before even starting to speak. It has been many years since I left the United States and yet I still get shivers down my spine when I still read want ads with the wording: "Young saleswoman, beautiful presence required..." I realize that we are still at the beginning of a radical cultural transformation that must gain ground lost in the last thousand years and this change must start from child education, starting from families and from us women.

How did you overcome prejudice and acquire your current position?

My American training, based mostly on merit, the great empowerment of the individual and the strength of the union, has certainly been illuminating, but at the base there is a usual behavioural vade mecum always guiding me: study, be professional, respect the profession, admiration for those who have ambition and often success in addition to the expected number of hours of work belonging to anyone who is successful. In fact, one of the concepts that's difficult to convey but that in today's world should be emphasized, especially to the youngest, is that there is no success without sacrifice: in short, even YouTubers work hard! I want to underline what for me, respect for the profession means; respect is condensed into a few but fundamental rules. Respecting the profession means respecting the ingredients, the producer and the supplier, respecting the customer and our colleagues. But beyond that, our body language must speak clearly: no use of our body to improve one's position. Unfortunately in the struggle for equality, there are still women who do this by creating an actual retrogradation (and I'm misusing a culinary term!). And in this sense the responsibilities also lie with those who communicate that women should first of all evaluate the positivity of the message and decide whether to publish or not. This is as I see it, personally.

This question is really difficult to answer because the Covid situation has worsened things dramatically, leaving behind many women who had embarked on difficult careers, outside the norms and schedules until then generally conceived as "normal". Digital school classrooms panicked thousands of cooks and female chefs who found themselves left to fend for themselves with a family to tend to and zero help. It's true: women have paid the greatest price in this pandemic. So right now I don't have a special program other than the one I've always followed, linked to hotel management schools, including female schools, making speeches both on gender equality and the promotion of female entrepreneurship (proposing a collaboration with Valeria Sebastiani, for example). I hope in the future to have the means and ideas to further push the participation of women who are scarce at the moment but precisely due to the lack of women in my field. The sad consideration I make is that I have been the only Michelin star awarded woman in Rome for 12 years and the only one with Tre Forchette recognition. There is no discrimination by the authoritative organizations that bestow these awards... There are no women to choose from? Actually, I think that they too, like me, are desperately looking for them.

This is the question I constantly ask myself. It seems prehistoric to still talk about advantages for women, as if we were a defenseless minority without rights, "little women" to protect, but the reality is that, making a comparison, if there had not been an affirmative action program, we would not have had President Obama, the first black man to lead the USA. Continuing with the comparison, preferential access to credits, or help to female businesses, legislation that demonstrates with facts how much to endorse the difference between genders, can only help the cause. Precisely in concrete terms, we should be inspired by the legislation of northern countries with substantial differences in the management of, for example, maternity. Subsidized loans should be given to allow easy access to even small loans for education, car purchases (to promote independence) and more. Legislation should be changed by classifying crime against women as heinous and by significantly increasing punishment. We should create ad hoc funds for the protection of women and have a record of those who commit crimes against women similar to pedophiles. Companies that are convicted of gender discrimination should be heavily fined, as well as compensation for victims. Finally, greater fluidity and understanding on access to specific programs (funds, education, support, etc.) would be desirable because they are often incomprehensible, even for those with a higher cultural level. Let's imagine ourselves on the other side. Streamlining bureaucratic processes would be desirable for everyone but, as a direct consequence, women would also benefit from it.

What methods and what formulas can you suggest to raise awareness and make the male world aware of this gap? A gap which, moreover, also has consequences on GDP.

All aspects, even those that seem unrelated to the topic, must be taken into consideration. Starting from the family, from education, from legislation on the protection of women, to punitive action against those who commit violence on women, everything must change. As long as we have, for example, a statute of limitations for rape or political crimes that justify violence against a woman by classifying the event as a "stunt," we will still be behind. Making society understand that inclusion is a (statistically proven) source of enrichment for society itself is fundamental. And for those who are spectators or protagonists, immediately detect and denounce pink washing, fearlessly.

What message or advice can you give to women who can and wish to emerge, in particular to those who are still struggling and to the younger generations? Including generational transition.

The only advice I feel I can give is to ignore any advice from people that limit your potential. Teachers, friends, counselors who do not foresee the breaking of the so-called "glass ceiling" must be put aside. Going your own way is essential by thinking big. And then, rebel, rebel whenever you can, at the cost of making a poor impression, at the cost of losing, at the cost of being marginalized. But you will remain faithful to yourself, consistent and thus more respectful of yourself, you will gain strength to be able to say the uncomfortable thing, what others think but don't say, paving the way for others. Highlight the merits of other women, not just yours, but of others because only in this way, through role models, will others arrive.

Tell us an anecdote (positive or negative) of an experience on the subject.

I could tell a lot of stories given how long I've been working and not only in this field. Maybe there are a couple of fun ones. One, when I was working as a prosecutor, crowded in front of the judge I felt the renowned "dead hand" groping me. I pointed the lawyer's foot behind me to the point that he screamed in pain and the judge in front smiled amused when he heard the my complaints to the lawyer. Another time, in the kitchen, early in my career, I reacted to one of the chefs who pushed me against the counter to take something high up. I think that a reaction is often necessary to make people understand the boundary that can't be crossed and that should already be known to people but, in actual fact, is not always the case. We are incredibly faced with episodes like the one a few weeks ago of a female sports reporter slapped on the backside on live news coverage. Unfortunately, not everyone reacts because each of us is different. We should focus on those who do not have the strength to do so. I am a southern Italian woman who grew up defending herself. Many others, unfortunately, fail for various reasons and our job is to educate women that defending themselves is a sacrosanct right to be asserted without ifs and buts. There are many positive episodes but they do not concern me as a woman: at a professional level I would not say a word because I think that Gambero Rosso, Michelin or my colleagues have chosen me for my professional skills and not because I am a woman. An advantage of being a woman? None more than being of a different gender. True inclusion must be short-sighted to the point that it cannot distinguish the gender of an individual but only their human value.