Shepherd's pie: origins, history and recipe of the British pie 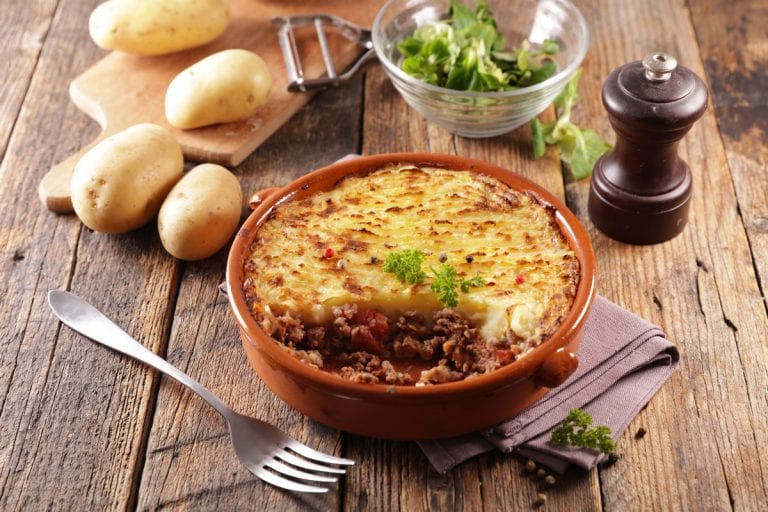 Minced meat, Worcestershire sauce and lots of mash potato: these are the elements for the typical English "shepherd's pie", a unique mouth-watering dish that will win everyone's palate. Here's how it came about and how it's done.

Anyone who goes to a British pub on a Sunday will undoubtedly find the traditional Sunday roast on the menu, the meal that revolves around roast beef but includes a number of other tasty items and sauces. Served on the same rich and colorful plate. In the morning, there will be a full English breakfast complete with all the typical dishes, from scrambled eggs to mushrooms. But there are many traditional dishes to be tasted in the historic restaurants: omnipresent, often in a vegetarian or vegan version, is the shepherd's pie, the meat and potato pie now known and appreciated in other countries.

For the British it is one of the comfort food par excellence, as well as the toad in the hole (salted Yorkshire cake puddings and sausages) or a bacon sandwich. With its unmistakable scent and tasty taste, the “shepherd’s cake” (this is the literal translation) is usually prepared with lamb or beef. In the second case it is called cottage pie. The shepherd’s cake is seasoned with tomato and Worcestershire sauce and covered with a thick layer of mashed potatoes. Bake until the greedy crust forms on the surface, where butter flakes are often added to make the purée even more creamy. There is not much information about the origin of the recipe, but what is certain is that it was invented by peasant housemaists to recover the leftovers of Sunday’s roast beef. 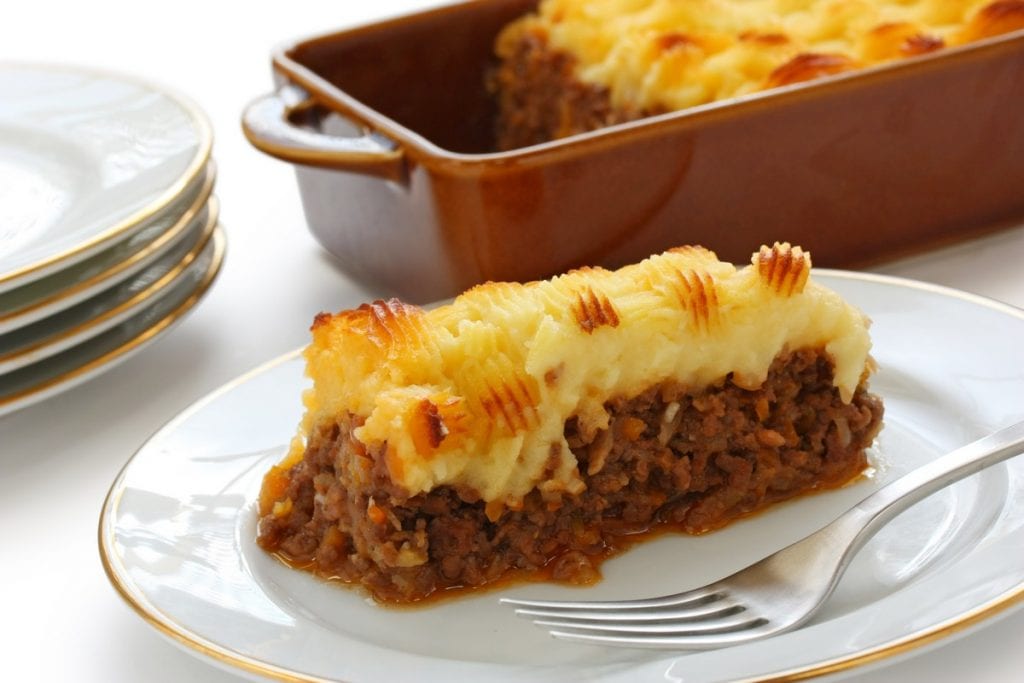 Origins of the recipe

Potatoes were always present in the countryside, as were butter and milk. So the idea of adding mashed potatoes (a very common dish in the English diet) came naturally. There are also those who believe that it was instead the Irish who created the dish, once again to save the leftovers and avoid waste: all those pieces of meat too small to be consumed or the less valuable cuts were stewed together and covered with potatoes, a product symbol of the national cuisine. Whichever version is correct, the birth of shepherd's pie dates back to the late eighteenth century and was born out of the need to make the most of every available resource.

Let's get to the preparation: each family keeps its own variation of the recipe, as well as pubs, restaurants and bistros, which offer different interpretations according to the preferences and needs of local customers. It starts with celery, carrots and onions soffritto, in which the meat is cooked, often accompanied by peas. We then add a little tomato paste, meat stock and Worcestershire sauce, a fundamental ingredient for the success of the dish, to which it gives that unique aroma and flavour.

It is a sauce invented by chemists John Wheeley Lea and William Perrins (still today Lea&Perrins is the most famous brand in the United Kingdom) and first marketed in 1837. Production takes place in the city of Worcester, but here too, the origins of the preparation are shrouded in mystery. Legend has it that it was Lord Sandys, the local aristocratic governor of Bengal, who asked the chemists to reproduce a particular sauce he had tasted in India. The two did so but with little success, so they left the jar in the cellar and forgot about it for several months. One day, driven by curiosity, they tried the sauce again and found it much improved. The recipe is based on on onions, garlic, salted anchovies, shallots and aromatic herbs. Ingredients that give life to a dark liquid that is aged for three years in wooden barrels, to be then added with malt vinegar, tamarind, cloves, chilli and sugar cane molasses. For the preparation of the real shepherd’s pie we asked Treefolk’s Public House, an English pub in Rome, Trastevere area, for help, which makes an exquisite version with Italian raw materials.

Chop celery, carrot and onions and cook in a pan with butter and oil. In a pan, brown the minced meat and then add it to the soffritto, together with the bay leaf, thyme and tomato paste. Combine Worcestershire sauce, broth and bring to a boil, simmering for about 45 minutes. Once you have a thick sauce, add the peas, seasoning with salt and pepper. Separately, cook the potatoes in their skins in salted water for about 30 minutes. Once ready, peel the potatoes and mash them, adding the warm milk, butter at room temperature, egg yolks, nutmeg and a pinch of salt and pepper. Place the lamb ragout in an ovenproof dish and cover the entire surface with the mash. Bake the flan at 200°C for 30 minutes (advice: turn on the grill on the last 10 minutes of cooking, to brown the potatoes better). Let stand at room temperature for about 10 minutes before serving.