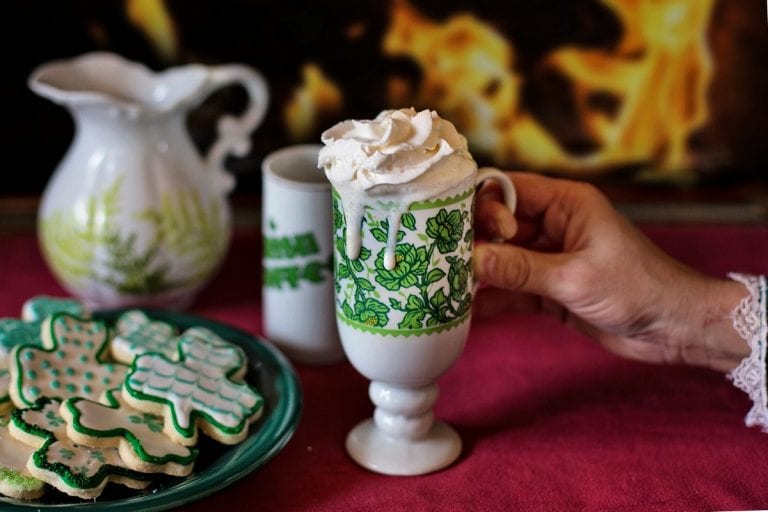 They are worth trying at any time of the year, but why not take the opportunity to experiment in the kitchen on March 17th? Here are some Irish recipes.

Ireland turns green, punctual as always with large pints of beer, music and parties every March 17th to celebrate Irish bishop and missionary patron saint: St. Patrick. A colour that recalls the immense meadows that have made the island famous all over the world, the bright green resulting from short and not very intense, but constant rainfall. It can be considered almost a huge open-air pasture, a feature that over time has determined the identity of the national cuisine, which unveils its most representative dishes on St. Patrick’s Day. Without forgetting, of course, to pair them with a few pints of beer, possibly Irish Stout, dark and with a roasted aroma, dry and drinkable, the beverage most consumed by the Irish together with tea.

Even in Ireland there is the idea of English breakfast, inevitable savoury breakfast to start the celebrations in the best possible way. A ritual started in the Middle Ages to guarantee farmers the right nutritional intake to face the hard work in the fields in a time when breakfast and dinner were the only two main meals of the day. Furthermore, English breakfast was the typical breakfast of newlyweds throughout the Middle Ages, when in England it was possible to get married only before noon time, to finally become, in the Victorian age, a meal consumed by everyone, from the nobles to the working class. Traditionally, it includes scrambled or fried eggs, bacon, toasted and buttered bread, grilled tomatoes, mushrooms, beans in tomato sauce and black pudding, a sausage made with different parts of pork and flavoured with spices and herbs. In Ireland, they also eat sausages, fadge (typical local potato bread) and boxty, grilled potato pancakes.

A sausage and potato stew of ancient tradition, usually brought to the relatives of the deceased as a sign of respect during a wake. But not only that: rustic, substantial and able to keep for several hours, Dublin coddle was also the dish of the working class, which needed a hot and nutritious meal after the hardest days of work. Other inevitable ingredients are bacon and onions, but each family has a precise recipe, which varies according to local customs and what’s available in the pantry: it’s in fact important that the stew remains a simple dish, even better if prepared with leftovers.

Another stew, but this time made with lamb: Irish stew is a warm and comforting dish, an invigorating preparation scented with bay leaves and juniper berries, slow cooked for a long time to make the meat tender and creamy. Again, this is an originally poor man’s dish, intended for less wealthy families, farmers and shepherds of the 19th century who gave new life to less valuable cuts of meat by cooking them in broth, so as to make the gamey flavour of lamb or mutton more delicate, and create a creamy soup, flavoured with herbs from the countryside. There are many versions of Irish stew: some add a little beer to the preparation, others use more vegetables or combine spelt to make the dish even more complete. What cannot be missing, in any case, are the aromatics for the lamb.

Whatever the main dish, with meals is always soda bread, a loaf of bread made with baking soda. An unmissable delicacy on St. Patrick’s Day but which has its roots in the culture of the American Indians: they were the first to use a sort of natural bicarbonate of soda obtained from the ashes of wood to make bread rise. To promote and spread the consumption of this specialty, however, were the Irish, who made it for the first time in the early 19th century, with the introduction of bicarbonate in the United Kingdom. A recipe born out of necessity due to the financial conflict that at that time limited access to food, forcing people to rely on a poor cuisine based on using leftovers, which among its symbolic products also included soda bread, made with flour, bicarbonate, salt and buttermilk (or, more simply, acidified milk with lemon).

In Ireland, as well as in Great Britain, there is a long tradition of recipes made with puff pastry. Parcels and fragrant shells that usually contain tasty and creamy preparations, mostly based on meat. This is the case of beef and Guinness pie, a beef and Guinness beer pie characterised by the creaminess of the meat, cooked in a tasty bone broth, Worcestershire sauce and typical Irish dark beer. As is the case for English chicken pie, this too isn’t closed in two layers, but rather a meat dish covered with puff pastry: the beef is in fact cooked first, poured into a container suitable for baking in the oven and it is covered with a layer of puff pastry brushed with beaten egg before baking.

The most Irish drink there is, one of the symbols of St. Patrick’s Day, made with hot sweetened coffee spiked with Irish whiskey, served in a heated glass with plenty of whipped cream on the surface, sometimes with the addition of nutmeg and cinnamon. But how was Irish coffee born? This delicious recipe is the creation of Joe Sheridan, chef of the Shannon Foynes Port restaurant, a port in County Limerick which for years was a stopping point for longer transatlantic flights. In ’43 a flight had to return to the Foynes base area due to bad weather and the chef created the drink to comfort the pilot and passengers. Legend has it that silence suddenly fell in the room and an American passenger asked the chef if it was a Brazilian coffee: the cook’s alleged response was “No, it’s Irish” would explain the origin of the name.

With its unmistakable aroma and savoury taste, shepherd’s pie is generally prepared with lamb or beef––in the latter case it’s called cottage pie––topped with tomato and Worcestershire sauce and covered with a thick layer of mashed potatoes. It is then baked in the oven until a delicious crust forms on the surface, where flakes of butter are added to make the purée even more creamy. There is not much news about the origin of shepherd’s pie, but what is certain is that it was invented by peasant housewives to recover the leftovers of Sunday Roast. Many believe it was the Irish who created the anti-waste dish, a rather plausible theory considering the large national production of potatoes, but in any case it is a recipe shared by both islands.

There is no doubt that beef is the most characteristic meat of the local cuisine: even in England it is consumed a lot, thanks to the Irish who for years brought herds and herds of cattle to the island continent. At least until 1667, when the Importation Act wanted by the English Parliament prohibited Irish shepherds and traders from selling cattle in England, thus benefiting English landowners. A complex situation that in Ireland favoured the birth of the canned meat industry: after all, one could not bring live animals, but ready made products yes… the term corned beef, however, was born in the 17th century to describe salt crystals used to stuff the meat, of the same size as the corn kernels. It was thanks to salt that Ireland was able to develop this sector, because the ingredient tax––at the time very precious––was about a tenth of the English one. Ireland was thus able to import large quantities of salt at reasonable prices, to be used together with one of its greatest resources ever: beef. It didn’t take long for the country to start supplying the rest of Europe and America as well. Corned beef is still very popular with the Irish today, who eat it together with stewed cabbage, another local specialty, for St. Patrick’s Day.

Speaking of cabbage, in colcannon it becomes the protagonist: a creamy puree usually enriched with leeks and cabbage, one of the symbolic dishes of the nation. In fact, this recipe incorporates three of the most typical elements of the territory, in the past these foods were available to everyone, even the poorest families. Farmers of the past combined these three ingredients together to create a deliciously rich dish, so called because in Gaelic the word cal ceannann means cabbage. It is generally served with baked ham or bacon, and is consumed on several occasions: on Halloween, St. Patrick’s Day, but also during official wedding announcements. Tradition, in fact, has it that an unmarried and blindfolded woman picks a cabbage from the garden to make colcannon, inside which a ring is inserted: the lucky one who finds the jewel on her plate will be the next to get married.

Finally, a seafood dish! The best local fish production ends up in the chowder, a warm and creamy fish soup, prepared with seafood, vegetables and a broth made with milk or cream, to be served with biscuits and crisp croutons. While the famous New England chowder is mainly made with clams and potatoes with cream, the Irish version is made with clams and other shellfish, salmon, cod or other fish available, depending on the catch of the day, plus shrimp, corn and a cream of milk and butter. The name seems to derive from the French chaudron, a word used to indicate the cauldron, where the soup was probably once cooked.