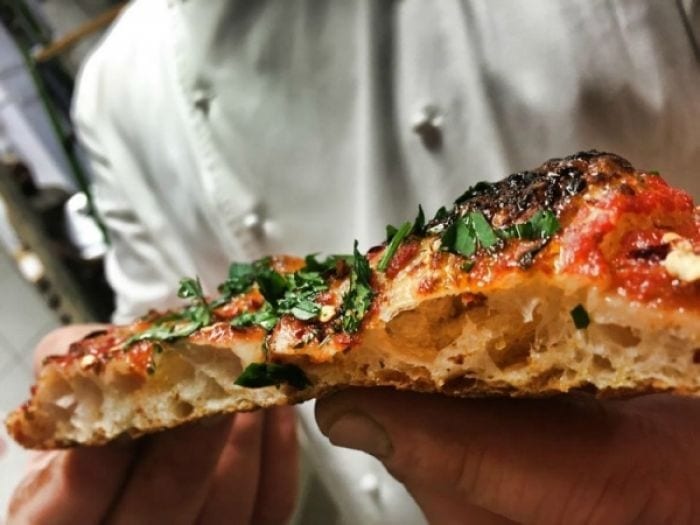 The most popular pizzaiolo in Rome, Gabriele Bonci, is about to bring his concept of pizza beyond Italy's borders. Meanwhile, Stefano Callegari, the inventor of Trapizzino, the best known and loved Roman street food, has opened a new spot in New York City.

His name is a byword for hungry Romans and for all those passionate about the arte bianca, the magic of pizza-making. Gabriele Bonci, with his eating spots in the capital city, is one of the best known and loved, most innovative pizzaioli in Italy. Despite the success and fame he has achieved, he is still experimenting, investigating, changing the game and starting from scratch. This time he is bringing his concept of pizza, and, in general, his approach to food, beyond Italy's borders. The project has been in the air for a while but is scheduled for June 2017 - in Chicago, a city in full culinary ferment. What's new about this venture? "We want to be seen as an authentic place, fully reflecting the principles that are the basis of my work." The new site will be in Sangamon Street in the West Loop, "a very young zone, full of students and packed with interesting eating places." Here, an all-American team will prepare Bonci-style pizzas with American and Italian ingredients. "I have found fantastic producers for all my ingredients, especially for vegetables." When Bonci speaks of producers, he means small American farms that observe the rules of natural agriculture. Among his Italian products is the flour, Piedmontese, from Mulino Marino. "But with time, we will experiment with American wheat as well."

The ultra-Roman snack, Trapizzino will also venture from its home. The invention of another Roman pizzaiolo, Stefano Callegari, Trapizzino is a fragrant, light, triangular pizza pocket, stuffed with sauce and the most authentic flavors of Roman cooking. It will open soon on the Lower East Side at 144 Orchard Street. Its explicit mission is to show New Yorkers another aspect of Roman food. The idea came from two Callegari fans, Luca Vincenzini, an ex-television producer, and Nick Hatsatouris, Los Angeles restaurateur. "Trapizzino is emblematic of Roman eating," said Luca Vincenzini. "On Sundays, young New Yorkers, sometimes the children and grandchildren of Italians, can't go have lunch with their grandmothers in Rome. So why not offer those same flavors in New York?" The place will open in February. In addition to the classic Roman fillings, some new ones will be specifically adapted to American tastes. Besides making Trapizzini, the spot will prepare typical Roman suppli', rice croquettes.