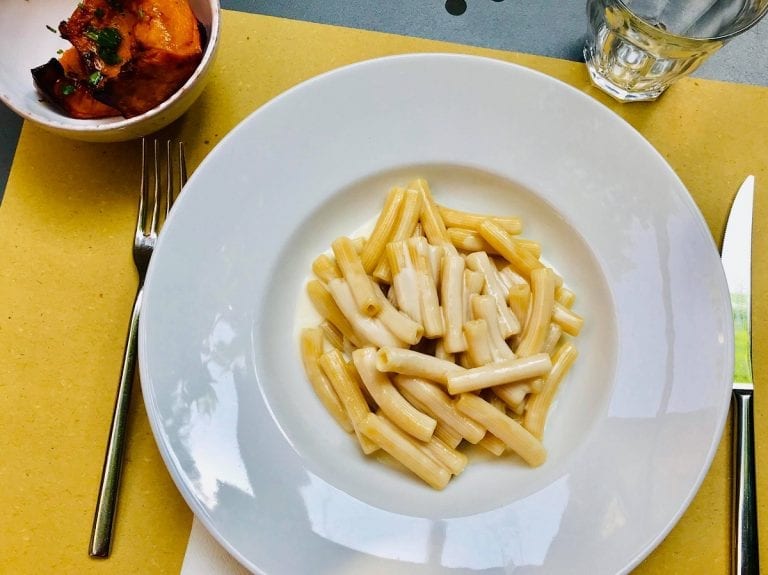 Behind the initiative of the Bolognese trattoria Pane e Panelle is the desire to serve the community. By educating kids who don't eat at school and still can't provide for lunch on their own. A first course and vegetables sold at 5 euros. But with quality ingredients. That's why we like the idea.

Pane e Panelle is, upon first glance, "only" a Sicilian trattoria in the centre of Bologna. An outpost dedicated to the cuisine (and culture) of the sea that has been open in Via San Vitale for more than a decade, thanks to the passion of Isabel Muratori. With her, the Sicilian chef Luca Giovanni Pappalardo who first started in the city, before moving to Milan to follow the Capra e Cavoli vegan restaurant project. Ideas and plans between the two, however, were never interrupted. And in fact for a couple of years the chef has been back in Bologna, in the kitchen of Pane e panelle, to promote an approach to the table that wants patrons to eat eat well, including those who work every day in contact with the public. Therefore making responsible choices in the selection of ingredients––protagonists of an informal and never boring cuisine––like oily fish often neglected by restaurants, arriving directly from the Adriatic Sea fishing boats, or the vegetables of the "clandestine" peasants.

The trattoria becomes a community

But also, in parallel, the project strives to be a point of reference for the community, "in a central neighbourhood of Bologna, which however is not immune to degradation", emphasises the chef, known for a never masked pugnacious attitude. There is so much of his "civic sense" in the last project born in the restaurant with the beginning of the new school year. Zitto e mangia, literally: shut up and eat!, is a beautiful initiative based on the value of food education, and "on the need to not limit oneself to being a merchant, trying instead to make ethical choices that allow us to communicate with others". Pappalardo has been insisting for years on the importance of educating to taste and the benefits of a healthy food lifestyle, thanks to a training period as a food historian, which guides his choices in the kitchen.

Zitto e mangia! Lunch for middle-schoolers made in trattoria

But the operation Zitto and eat! arises mostly from solid need, and is the result of direct experience with his own kids, now teens: "For my children, as for many children who attend middle school, when school is over (the bell rings at around 2pm) often means loitering around the neighbourhood with friends looking for a quick snack to solve lunch; others, instead, return home, open the fridge and improvise something, not yet knowing how to cook". If we add to this the bad eating habits matured in younger age––aversion to vegetables, preference for chips and sandwiches, consuming food compulsively without thinking too much about future consequences––the "service" proposed by Pane e Panelle could turn out to be a godsend for many parents looking for a safe haven for their children.

Just recently, and for the entire school week, the Via San Vitale trattoria is offering a 5-euro menu for middle school students, who have difficulty finding a good alternative in the centre of Bologna with that budget for lunch. And furthermore, it aims to make kids discover new ingredients, in addition to respecting the basic rules of being at the table: "Without half measures, we eat what is served that day. And possibly eating without browsing their phones”. Every day the menu changes, the formula always offers a starch course - pasta or rice - a side dish of fine vegetables and tap water, sold at 5 euros... "And with 10 euros you can also bring your girlfriend" reads the poster of Zitto and Mangia! After all, lunch in a trattoria is also a time for socialisation: the social table is reserved for the kids, “but if the initiative were to take hold there is room for everyone. Word of mouth is already working, the idea is that kids feel empowered even by coming here alone, eating together, telling their family what they ate. And maybe ask their parents to recreate the dish at home: there is great care in sourcing for ingredients, proportions and nutrients are balanced, but the recipes point to simplicity, so that they can easily be replicated at home".

The importance of food education

Luca makes no effort to hide it, the offer is anti-commercial: "If you serve a plate of square macaroni with 36-month Parmigiano Reggiano cream and a Red Kuri pumpkin dish baked in a Campi Aperti oven, you can't think of asking for 5 euros and make any profit". But the choice is thought out, and after all the trattoria is also open to the public at lunchtime, with the usual menu. The Zitto e Mangia! initiative comes from reflections that disregard profitability: "In school no one cares about food education, despite the importance of the subject. So we are doing something concrete. And we also begin to educate parents: some homemakers are already asking us to change the menus according to the tastes and whims of their children. It doesn't work like this: Zitto e Mangia is a rule! We're already working on a mailing list to send out weekly menus to families every Monday. Anyone who really needs personalised menus, due to intolerances or health problems, may request changes".

We are also working on a "prepaid" card to guarantee that the money is actually spent in the restaurant, not one euro more than what is necessary for the menu formula: "If kids wants to order something more, we will not satisfy that order. Our menus are balanced to guarantee the ideal nutrient supply". Under consideration, in the wake of the project, is also the idea of organising cooking classes for beginners. Certainly not to create star chefs (given the times, that risk is always lurking), but to teach kids the pleasure of preparing (and eating) a good dish. Growing up also happens at the table.