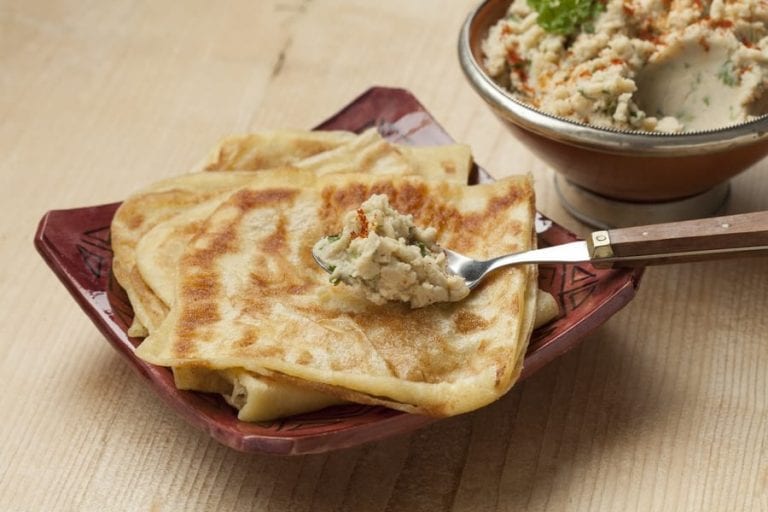 Not just couscous: in Morocco even breakfast boasts special recipes, which are the result of the different cultural contaminations that have shaped the identity of the country. Here are the country's morning specialties.

Anyone who has seen Casablanca, the cinematographic masterpiece directed by Michael Curtiz, will remember Rick Blaine enjoying fine spirit cocktails in his famous restaurant Rick's Café Américain. It's impossible to observe those glasses––consumed in the WWII French Morocco bar––without wondering what the ingredients in them. Especially considering how Moroccan cuisine is the result of a mix of different flavours and aromas, spices and delicious fruits. Moorish, Berber, Arab and Mediterranean influences have been mixed together over the centuries to paint the current image of local culture, food included. At the base of the Moroccan diet are couscous, meat - lamb, beef, chicken, rabbit - fish products, but also plenty of fruit and vegetables, olive oil, dried fruit (dates in the first place), and a series of spices used in the majority of traditional dishes, such as cumin, turmeric, cinnamon, ginger, saffron, black pepper, sesame, paprika and many others. 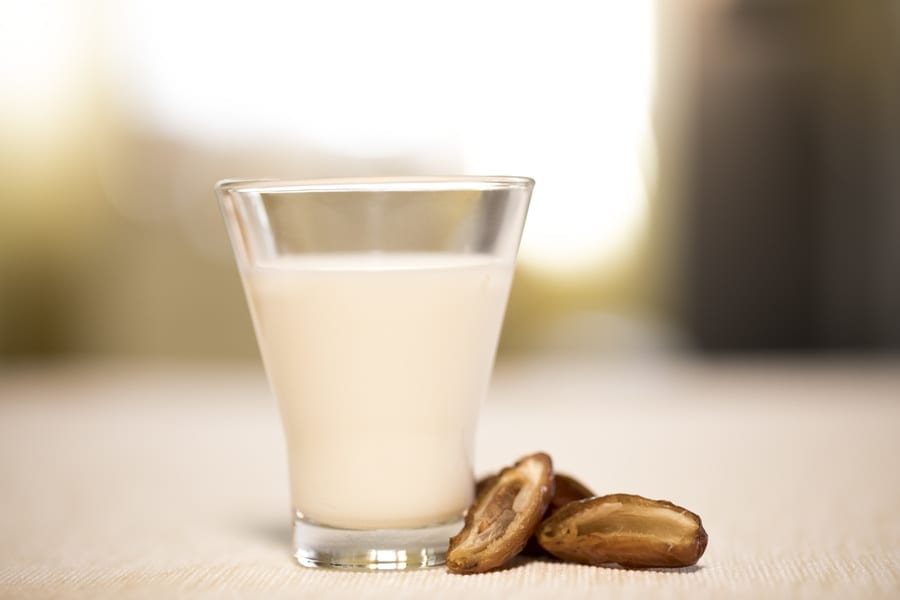 Even breakfast foods and beverages are enriched with intriguing and enveloping aromas, starting with tea, which is characteristically flavoured with fresh mint leaves. What's for breakfast in Morocco, then? Sweet and savoury pancakes, but in addition to the more classic combination of milk and dates, nutritious specialties that represent, once again, the complexity of the local cuisine.

Morning meals may start with msemen (or musamen), that’s also known as malawi, malawah or murtabak. This thick crêpe with a bread-like texture is typical of Maghreb, and widespread in Morocco, Algeria and Tunisia. The recipe uses flour, semolina, yeast, water, sugar and clarified butter: this traditionally square Moroccan pancake is composed of a series of thin overlapping layers of dough folded onto each other, to form a kind of thick and fluffy pancake. They are cooked on a hot plate lightly greased with a little oil or butter, usually stuffed with vegetables or meat, according to preference. The origin of the name is Arabic samen or smen, which means "clarified butter." The word me-samen means, therefore, "with clarified butter", an essential ingredient for the preparation of this product. 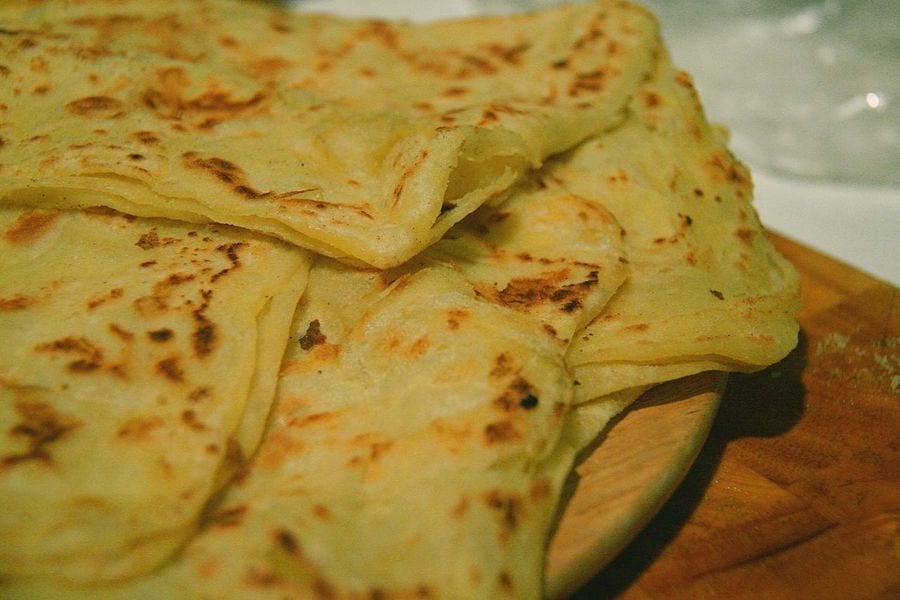 A very popular tradition in Arab countries is cooking with clarified butter. Butter cooked down and separated from its water and milk proteins, has the appearance of a solid block that’s perfect for cooking and also frying because can maintain a higher smoke point (what burns quickly in whole butter, are in fact, milk proteins, absent in the clarified version). The Moroccan smen is very similar to the Indian ghee, a similar fat but obtained by separating casein only after the Maillard reaction with sugars, an operation that lends the final product a much more intense aroma than original butter. Used very often to flavour couscous, smen is obtained from fats present in goat's and sheep's milk, usually flavoured with herbs and spices such as cinnamon and coriander seeds. Once flavoured, it is melted and simmered until the milk proteins separate, leaving only the limpid fat component, which is filtered and cooled. 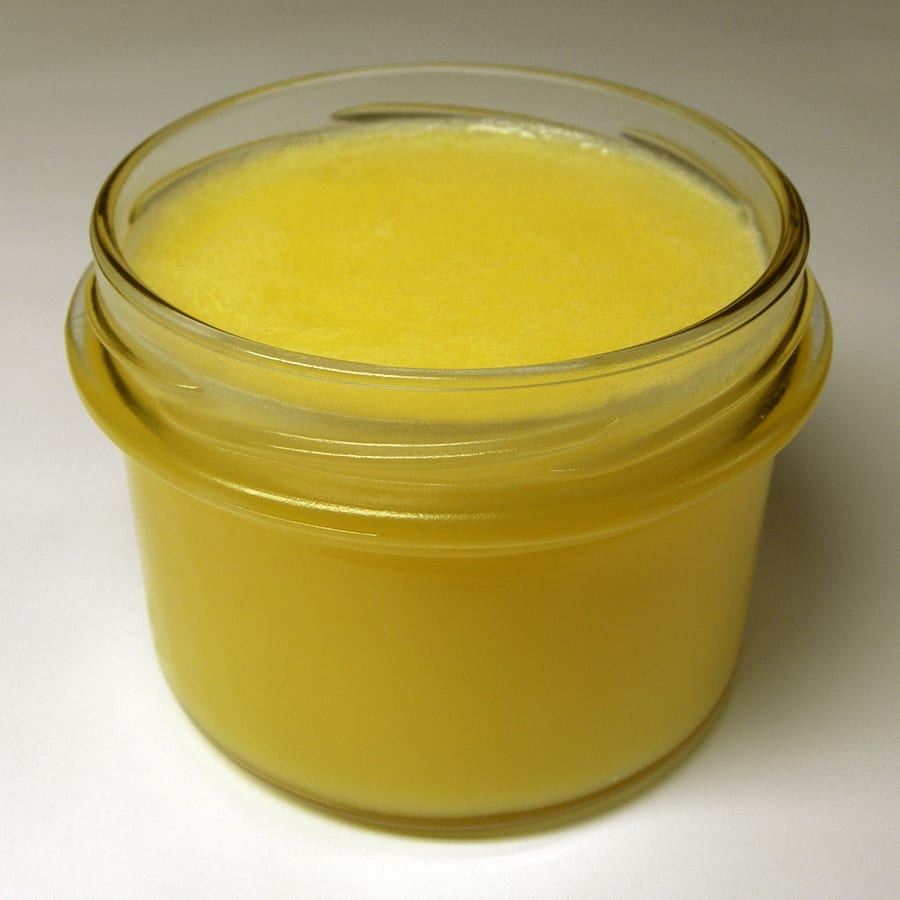 The Moroccan breakfast continues with another type of pancake, this time more similar to the French crêpes or, even more so, to Anglo-Saxon crumpets: thick, flat, savoury cakes with a soft, porous texture, made from a yeast mixture cooked on a griddle and eaten toasted and buttered, alongside a cup of tea. Born as hard flatbreads cooked on a hotplate, these crumpets changed to soft and spongy only in the Victorian era, a period in which the use of yeast began to spread, and then, from the nineteenth century, with the addition of baking soda that these were added with greater airiness. Baghrir (or beghrir) This can be considered the Moroccan cousin of the crumpet for its spongy and moist texture, but above all for the many small holes that form on the surface, perfect to accommodate sauces, jams, butter and various other condiments, both sweet and savoury. 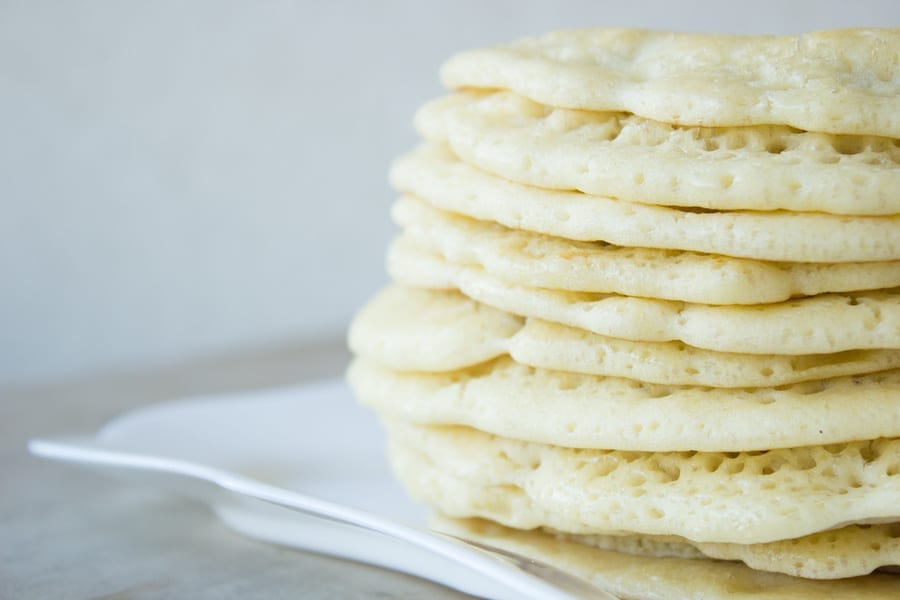 The snack for Ramadan

The presence of semolina is key, as one of the most popular cereal products in Moroccan cuisine. Tradition dictates combining baghrir with a mix of honey and butter, a custom that's also shared with Algeria, but it's often possible to find the cake topped with preserves and jams, served whole or cut into wedges and dipped in various sauces. A very common variant contains raisins, and is very popular especially during the Ramadan fast, eaten as a snack for iftar, the evening meal with which Muslims conclude their fast at sunset, after the call for evening prayer. 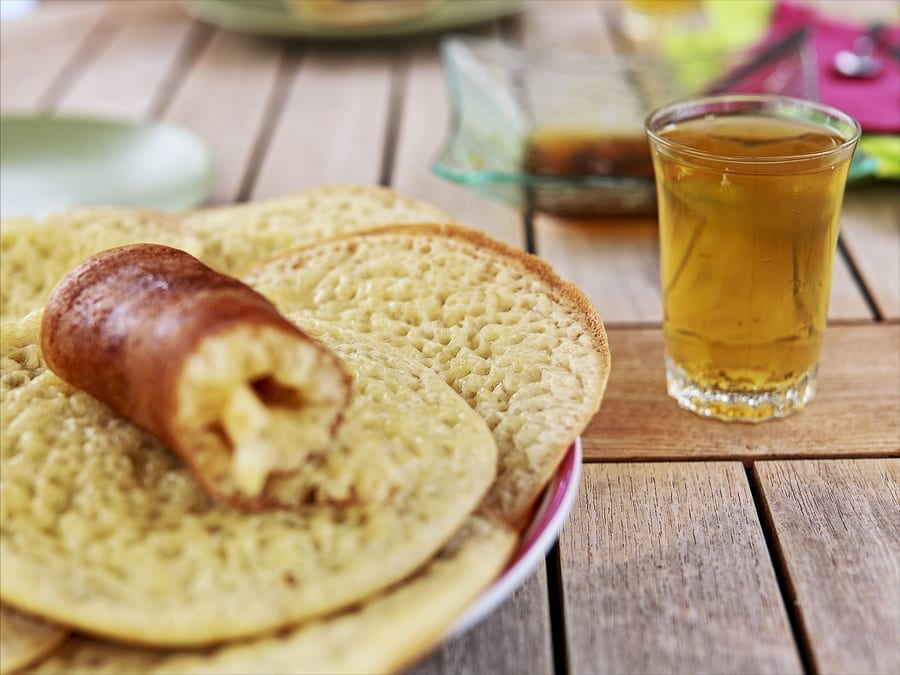 Mint tea, a beverage for guests

Whether at breakfast, lunch, dinner or for a snack, when a guest comes to the house, any Moroccan family will put water to boil for tea. And not just any tea, in Morocco much attention is paid to tea. Atay, latay or tay: many names and as many regional variations that change in regard to taste, aromatic intensity and freshness. Mint tea is a symbol of Morocco and the hospitality of the locals, a hot beverage consumed at all hours, starting with breakfast, especially if there are other guests at the table. A sign of conviviality and generosity, over time mint tea has become so deeply rooted in local customs that it is now part of Moroccan etiquette: refusing a cup, in fact, is considered an unkind gesture. 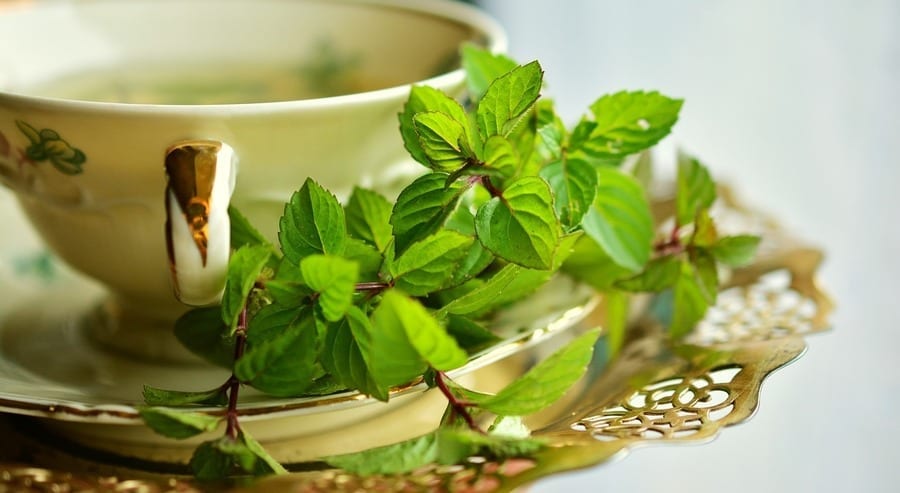 How tea spread to Morocco

Ingredients, doses and brewing method vary according to area and time of year: in winter, for example, when mint has a hard time growing, it is often substituted with chiba leaves, a type of medicinal wormwood herb that’s best known for its use in the preparation of absinthe and vermouth. In any case, to prepare mint tea Moroccans make an infusion of green tea and mint leaves in boiling water, usually added with a generous dose of sugar. Tea time is a tradition that dates back to the reign of Mulay Ismā'īl, in the first decades of the eighteenth century, when Queen Anne of Great Britain, to repay the sultan who had released a group of British prisoners, brought tea leaves as gifts. 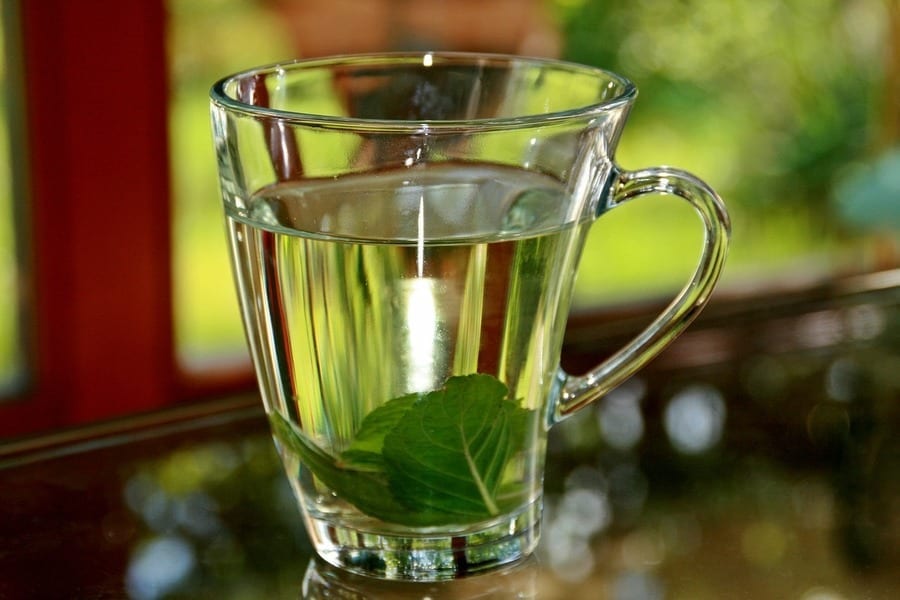 In the second half of the nineteenth century the beverage started to become popular all over the country, thanks once again to the British, who started selling excess Chinese tea (they had surplus after the closure of the Baltic ports during the Crimean war) in the Moroccan ports of Tangier and Essaouira. The addition of mint was the natural consequence of the flourishing local vegetation, especially the one based on aromatic herbs and spices.

Mix the two flours on your work surface, shape them into a volcano, add the salt and start pouring in the lukewarm water. Knead the dough to obtain a satiny, smooth and compact dough. With your greased hands, divide the dough in 6 balls. Brush the surface of each with olive oil and let them proof for 15 minutes, covered in plastic film. Melt the butter and add it to the olive oil in a small bowl. Keep a little semolina flour handy, too. Flatten each ball and roll it to obtain a square shape. Flatten the squares with greased hands. Film a large pan with more olive oil and cook the msemen turning until both sides are golden.