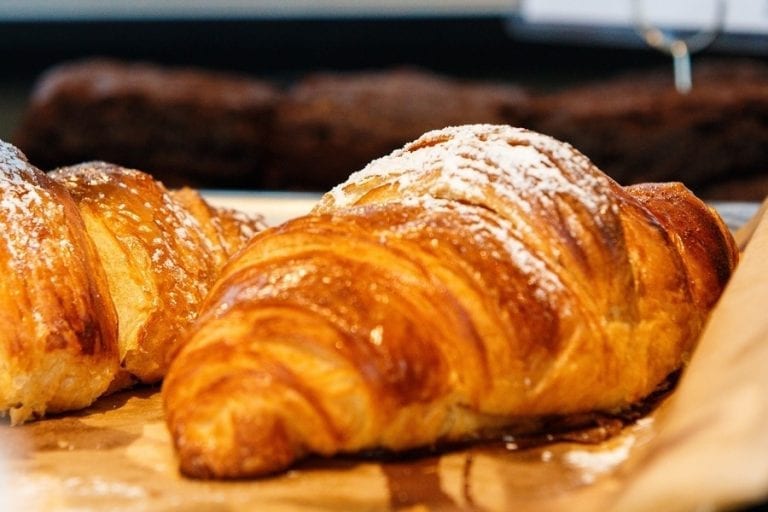 As part of one of the most popular breakfasts around the world, the starring role is played by the croissant and coffee pairing, a tradition that became popular thanks to the French, but which has its roots in Austria. Today we share the story of yeast and other products of the French petit déjeuner.

When one thinks of French pastry tradition, the immediate association is with croissants and pain au chocolat. In fact, resisting the heady scent that spreads among the alleys and streets outside local boulangeries is not easy, but breakfast in France––as we know it today––hasn't always existed. It all began during the Renaissance, when the habit of eating buttered bread and hot milk in the morning began to take hold, a simple combination capable of supporting workers throughout the day. Only a few decades later coffee made an appearance, which today is the morning beverage of choice of most Western populations. Coffee didn't begin to make its way into the homes of the French until the 19th century with the birth of the term petit déjeuner, to indicate breakfast as a meal. It's with the typical French breakfast that we're inaugurating a brand new column in which we share, with history and legend, the different ways of having breakfast around the world. 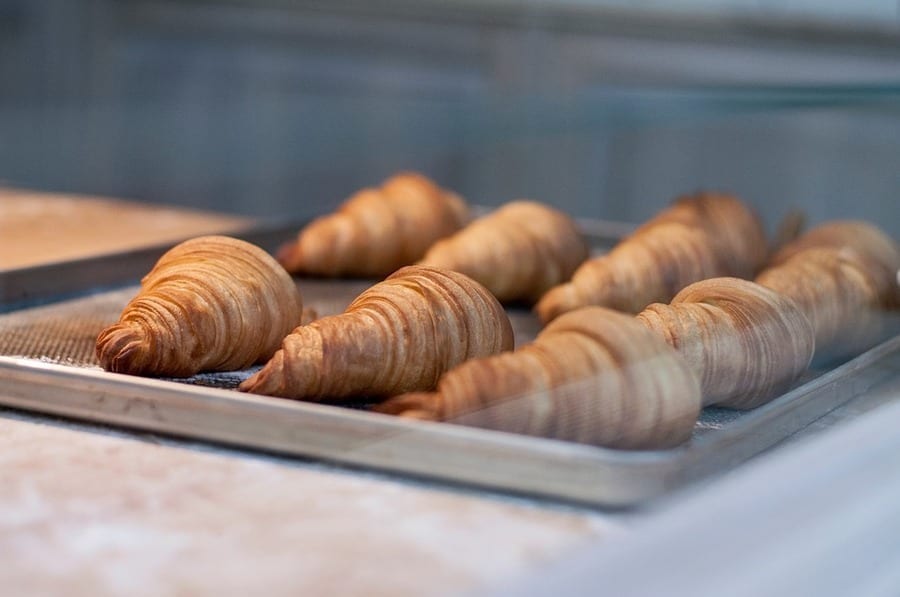 Croissant, between history and legend

And when it comes to breakfast, in France, there is no product more representative than the croissant, a pastry that has become a symbol of the country but that actually has its origins in Austrian culture. In fact, local lore has it that the famous crescent-shaped roll (croissant means, literally, crescent) was created to celebrate the heroic undertaking of the Viennese bakers who, awake in the middle of the night to work, sounded an alert in 1683 signalling the siege by Ottoman troops. When the Turks were defeated, the Viennese decided to celebrate with a pastry that had the shape of the symbol of the Turkish empire, the halfmoon.

As in all gastronomic traditions, however, fact and legend have overlapped over the centuries, creating a true myth around this buttery specialty. Other stories, in fact, date the birth of the croissant to 1839, the year in which the Austrian artillery officer August Zang founded the Boulangerie Viennoise in Rue de Richelieu, 92 in Paris. Here, among the many delicacies, the scene was dominated by kipferl, a walnut-filled flaky pastry considered by many food historians to be the ancestor of the croissant. The first written record of the pastry, however, dates back to the mid-19th century, in the volume Des substances alimentaires, and then again in the Dictionnaire de la langue française of 1863, while the first printed recipe arrived in 1906, in the Nouvelle Encyclopédie culinaire.

Croissants aside, France boasts a wide pastry and sweet heritage, take viennoiserie, for example. Artisan tradition of baked sweets that's connected to the world of bread-making, very different from the pâtisserie realm, which includes instead cream-filled desserts. As the name implies, the term is inspired by the Viennese baking origin, and by that first boulangerie opened by Zang, and includes all leavened pastries that fill the shelves of ovens in France. Consider the pain au chocolat, also called chocolatine south of the Loire, or petit pain in the North of France: this is a puff pastry made with the same dough as the croissant, but square-shaped and filled with bars of chocolate. Or the pain aux raisins, same brioche but stuffed with raisins; the croissant aux amandes, with almond paste and toasted flakes on the surface, the dough filled with sliced apples, plus all the sweet loaves characterized by a generous dose of butter such as pain au lait, in the simple version or enriched with chocolate chips.

Viennoiserie, therefore, includes the most popular and appreciated specialties of the petit déjeuner, but there's more. Madeleines, typical pastries hailing from the commune of Commercy, in the north-east of France, became famous thanks to the work of Marcel Proust “À la recherche du temps perdu”, and the famous tasting scene of the madeleinette (or petit madeleine) with tea, which awakens old childhood memories in the narrator ("But as soon as the sip of tea mixed with the pastry crumbs touched my palate, I was startled by the extraordinary phenomenon that took place in me. A delightful pleasure had invaded me, isolated, without any notion of cause"). The name of this cake seems to date back to the cult of Saint Mary Magdalene, the disciple who, according to Catholic Christian tradition, saw the Christ risen first. Hence the typical shell shape, which in Christian symbolism has always been attributed to pilgrims. Other sources, however, including the New Oxford American Dictionary, show a different version, which associates the recipe with Madeleine Paulmier, a 19th-century French pastry chef who first invented said pastries. The dough is soft and with a fluffy texture, boasting very pronounced notes of butter and lemon. These are usually enjoyed with tea or coffee, often for an afternoon break but also for breakfast, as a more delicate and light alternative to croissants. 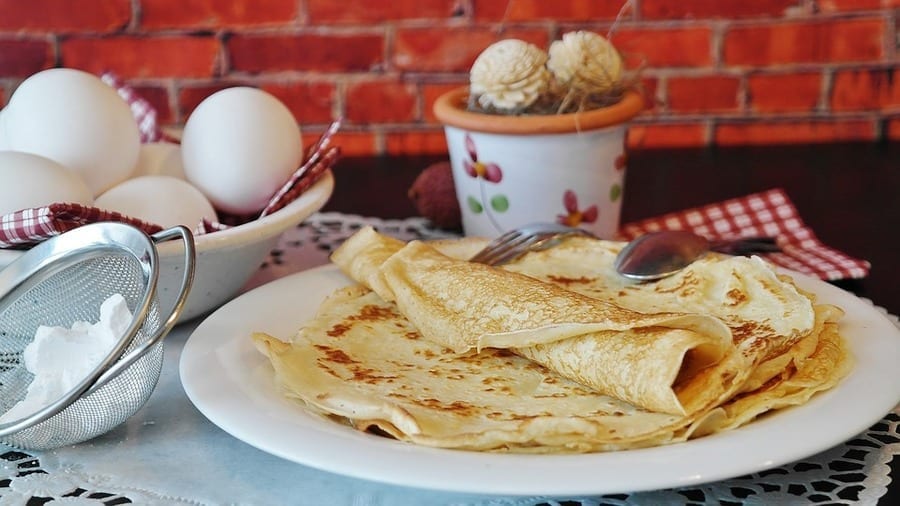 If brioches and madeleines are among the most purchased products at bakeries, when breakfast is prepared at home, crêpes are the protagonists of the table: soft and thin wafers made from wheat flour, eggs and milk, slathered with marmalades, preserves, jams, honey, spreads or, more simply, with sugar and lemon juice, but also with savoury ingredients such as ham and cheese. Also in this case, there is no written evidence of their origin but, according to stories handed down orally over the centuries, the first crêpes seem to have made their appearance in the 5th century AD, to feed the French pilgrims who arrived in Rome after a long journey to participate in the Candlemass festival. Simple and quick to prepare, these pancakes were the ideal solution for refreshing and restoring the most tired pilgrims, who then brought the recipe back to France.

Crêpe suzette is also very widespread, a ubiquitous dessert of Paris bistros: crêpes are enriched with the addition of a caramel-based sugar and butter sauce, citrus juice and zest, and Grand Marnier, all served flambéed. Ancient home of this recipe is the Principality of Monaco, more precisely the Café de Paris in Montecarlo, at the restaurant of the great chef Auguste Escoffier. Legend has it that the dessert was born out of a mistake by the young apprentice Henry Charpentier, who in the excitement of having to cook for Edward VIII, Prince of Wales, dropped the liqueur on the crêpe which, in contact with fire, ignited a flame. The prince appreciated the dessert so much that he asked the cook to dedicate it to his friend's daughter who was having lunch with him, Suzette.