The iconic wine of Trasimeno: call out “Gamay” and Grenache answers It's always been called Gamay, when in reality it's Grenache... But in fact it's the representative wine of Lake Trasimeno. Fierce and determined vineyards have taken over the history of this wine with different expressions and potentials.

If making mistakes is human and persevering is diabolical, well, around here they’ve elevated the old adage to gospel. An entire paradigm was founded on an error, giving the keys to territorial identity to a “wrong” wine. We are talking about Gamay del Trasimeno which, immediately clearing any misunderstandings, Gamay is not. We are therefore not dealing with a half-brother of the typical vine of Beaujolais, but rather with the most cultivated grape in the world, Grenache, which has origins in Spain but today we find widespread in California, South Africa, Chile, Australia and in Sardinia with the name Cannonau and in Veneto with the name Tai Rosso (see article on the April 2018  issue of Gambero Rosso n.315, dedicated to this grape in Italy and in the world). We are in northern Umbria, in the Perugia province, between still waters and multiform skies, far from the glories of Sagrantino and close to Tuscany’s Cortona Syrah as well as to the noblest Sangiovese, so difficult to challenge on its own terrain (yet so many have attempted to).

Over the years, on these hills, Ciliegiolo, Grechetto and Trebbiano have found a home and excellent expression, as well as various international varieties, Merlot and Cabernet above all, even more comforted by the Bordeaux hangover of the 90s. But looking further back in time––viticulture here has very ancient origins––the episode that led to the false Gamay, traditionally planted as an alberello system and alas renamed “French viney,” speaks Spanish. A fascinating narrative that blends history and legend sees its first appearance as imported in the early 1600s by Eleonora Alarcòn y Mendoza, wife of Duke Fulvio della Corgna (family who ruled the marquisate, later duchy, of Castiglione del Lago). Lady Eleonora was an advocate of the good red wine the grape rendered: generous alcohol content, good structure, pleasant roundness, excellent aromatic intensity. The cataloguing was wrong, but by then known as Gamay locally, once the error was discovered, the general decision was to keep going on as always, aiming rather to select the local clone to make the most of it, and forging it as the spearhead of the Colli del Trasimeno DOC. The cooperative and the duke of Corgna

The Cantina Duca della Corgna, line of excellence of the Cantina del Trasimeno, borrows the logo from the coat of arms of the noble family and maintains the thread of history. It is in fact thanks to this cooperative, founded in Castiglione del Lago in 1957, that the district has returned to believe in the Gamay del Trasimeno, which over time had been explanted in favour of more productive and profitable varieties. «Since 1970 we have been vinifying it in purity––current President Massimo Sepiacci told us, who speaks of it like a tender child––And since the early 2000s, assisted by oenologist Lorenzo Landi, he has pushed more decisively towards a high quality wine.» The undertaking may seem difficult for a company that boasts 150 contributing members and over 200 hectares of vineyards, «but in reality this is a resource for us, which allows us to choose and select the best grapes for each label.» The standard-bearer of this varietal revival is Divina Villa, the most immediate Gamay del Trasimeno, vinified in steel, with herbaceous and fruity aromas, juicy sip and excellent persistence. «It goes well with the typical lakeside dishes, carp, tegamaccio; instead to complement red meats we prefer the Riserva,» that is the Divina Villa Black Label, aged in large oak barrels (more structure in the presence of innate elegance), while the rosé version is called Martavello, with hints of rose and red fruits for a fresh and mineral sip.

Finally, after a long refinement in the bottle, the new company cru will also be released, the red Poggio Petroso from the vineyard by the same name on suitable soils rich in skeleton: tasted in preview, we found this to be a potential beacon of the variety and the territory. «Over the years farming techniques were perfected and in the cellar we have aimed at a technological renewal, which now rewards us. Gone are the days when the grapes of the area were dispersed and sold to the highest bidder; now the cooperative is a reference for winemakers and consumers, managing all stages of the production cycle.» But Sepiacci doesn’t simply care about his cooperative (who also does an excellent job with Grechetto: see the latest born Poggio La Macchia, a cru with the most suitable vineyard), but the emergence of the whole territory. «We trust and encourage investments on Gamay, among our partners and beyond, sure that healthy competition helps in creating cohesion, and therefore to convey these wines nationally».

Madrevite, amid lakes and hillsides

The Madrevite cellar owes its name to an ancient utensil once used to close the small front opening of barrels. Located in Cimbano, on rolling hills dappled in forests and farmed fields, in the mild climate watched over by the lakes of Chiusi and Montepulciano, and by Lake Trasimeno. Nicola Chiucchiurlotto trampled these lands following his grandfather Zino, or driving alongside him on a tractor, at a time when agriculture meant sustenance, and cattle was raised alongside arable land, vegetable gardens, vineyards and olive groves. «At most, we contemplated a form of barter, and wine was nothing more than food. I still remember when I accompanied my grandfather to the ‘cantinone,’ from which folks returned with the dosages of tartaric and metabisulfite to make the wine more drinkable.» Nicola defines himself as proud and courageous, stubborn and a dreamer. It is certainly refreshing to be overwhelmed by one’s passion, by the energy he expresses when talking about his company. «I started studying agriculture, I worked in a neighboring winery alongside an expert oenologist, and that’s when I first fell in love with the profession.» He followed other paths, then enrolled in an evening course for winemakers, and it was a final study abroad program that marked the turning point: if his career in wine had seemed inaccessible when visiting the great Tuscan companies, he was he greatly encouraged by the spirit he met in France, where «one barrel and a garage» seemed enough to give voice to a terroir.

In 2003 the Madrevite brand was born, today 60 total hectares of which 11 are vineyards, in organic conversion «as a model of life, as a movement of conscience rather than certification.» Gamay was already here, in a splendid but exhausted vineyard at the top of a balcony, planted as alberello by Zino «with railroad cross pieces as head posts.» It was explanted «but 200 plants were saved in the adjacent vineyard, and from those we started again for the new grafts started in 2007.» Fatty, fertile clays that infuse plants and grapes with vigour, for a first bottle of rosé Gamay that materialised in 2009. And therefore once again lots of studying, research, work, assisted by oenologist Emiliano Falsini and agronomist Stefano Dini, thus forming a loyal group of collaborators. Until the debut of C’osa, understood as a product by those “who dare,” the first Gamay Riserva of the 2016 harvest, «a selection of grapes from now settled, adult vines, then aged in barrique,» a Gamay del Trasimeno with hints of rose and spices, warm and enveloping on the palate. «The need for a fresher and more immediate product has led us to add a vintage version,» hence Opra 2019, crisp and varietal, tasty to the last sip. Each label contains a proud gesture, in Madrevite, each grape is vinified in purity «so that all its qualities can be revealed, and the complexity of the territory that houses it can be expressed forming with it one thing.» 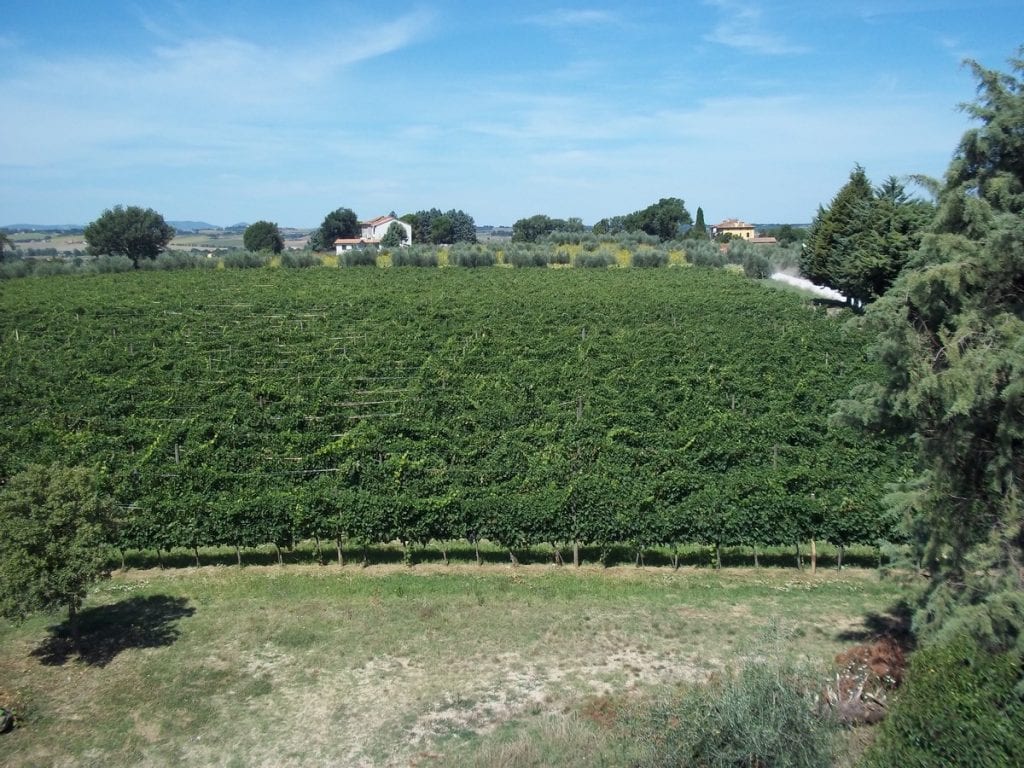 Travelling back to Castiglione del Lago, towards Panicale, we meet Vitivinicola il Poggio, which Anna Gattobigio leads with her husband Walter, who was «catapulted here from another reality,» says Anna: «He worked in telecommunications, around Italy, and ended up by my side with his hands in the soil. I consider it a great proof of love.» For her, on the other hand, the act of love is manifested towards these vineyards, where already as a young girl she couldn’t wait to run through: «I used to come home from school and eat quickly to join the grown ups among the rows, especially during harvest. I have a clear memory of crushing grapes crushed with my feet, the crisp berries and the cold liquid.» She studied as a computer programmer, fascinated by technology, but growing up she found herself taking evening courses to broaden her oenological knowledge, because the future was here. «My father planted different varieties, Grechetto, Ciliegiolo and Sangiovese but also Vermentino, especially unusual at the time, so much so that it was his perseverance that made it accepted as an adoptable grape in Umbria. It’s now been a few years since we rediscovered the value of Gamay del Trasimeno, and we are investing with commitment.»

The winery was built in the 1980s, when people started making wine on their own, then in 2011 it was enlarged and modernised; today there are 8 hectares of vines and they use all their own grapes, except for Gamay, for which they will need a few more years before having an internal production chain. «At the moment we buy excellent organic grapes and process them according to our philosophy. We are not particularly fond of barriques, I think that the character of the wine is best expressed if it takes its time, vinified without any interference.» Legamé is therefore a Gamay del Trasimeno with intense aromas of black cherry and raspberry, it expresses good acidity, nice body, has a fresh and dry mouth, «the ideal companion for typical lake cuisine, tegamaccio and eel that beg for a degreasing palate cleanser» To best describe it, Anna uses her worry, the Pinot Noir, which with obstinacy (do you remember her dad?) wanted to plant and make wine here (it’s called Lacrima Blu, “blue tear”), «where soils and climate will probably not be ideal, but where grapes receive all our love and care, eventually repaying us. So, if Pinot Noir is a woman, a little moody at times, and Cabernet is a much more virile male, I find Gamay del Trasimeno to be an angel, delicate but with a strong identity, which can charm or reject. It is up to us to interpret it in the best possible way to make it express all its potential.» 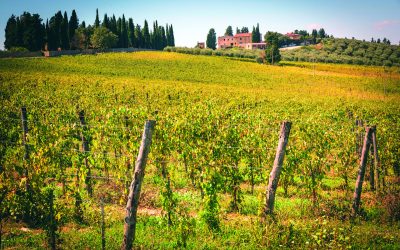