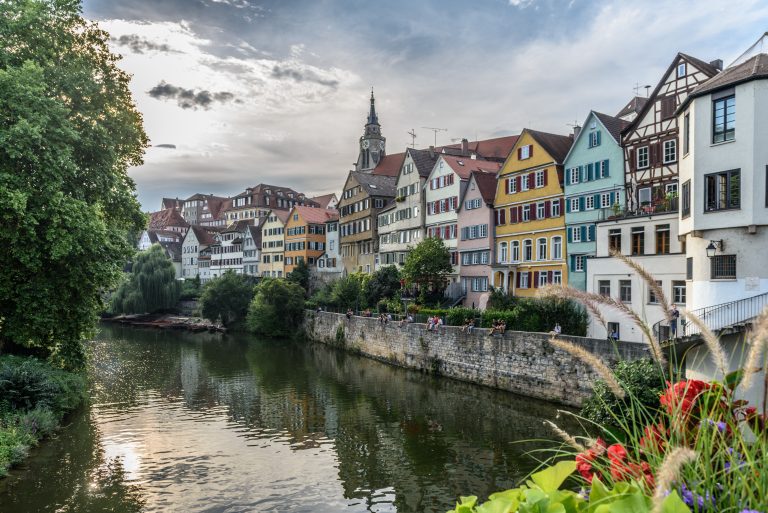 The inhabitants are almost all vegan, buses are free on weekends and single-use materials are costlier: here are the projects of this university city in Swabia.

Tübingen, the German city with an international spirit

A quiet, well-kept university city, nestled between the alps of the Swabian region and the densely wooded Schönbuch nature park, built around the perfectly preserved old town with its cobbled alleyways and typical old timbered houses. The river Neckar flows through the city center, covered with blossoms in the spring. Welcome to Tübingen, a city in Germany’s south-west that would put most Disney locations to shame, as claimed by many German newspapers. An area characterized by the countryside and one of the nation’s sunniest spots, but above all a student community that makes the city, though small, quite dynamic. "For the size of the city, I find it incredibly international," said Nele Neideck, who runs an expat community. She came to Tübingen eight years ago to visit a friend, "the city seemed like a fairy tale, with its idyllic landscapes and youthful vibe." But the real strong suit is its innovative spirit, devoted to sustainability and respect for animals.

Starting with the vegan diet: in Tübingen, there are self-governed housing initiatives, where cooking and grocery shopping is organized collectively and is mostly vegan. Local people are also very attentive to environmental and social issues, deepened through festivals, lectures and workshops. After all, Tübingen was one of the centers of the German student protests of 1968, which fought against authority and traditionalism for a leftist and environmental sensibility. But back to the vegan diet: the city is an official participant in Veganuary, the annual challenge started in the UK in 2014 to go vegan for one month, or at least reduce the meat intake. Of course, we cannot talk about an entirely vegan city, however a plant-based diet is undoubtedly the most popular in the area, as confirmed by some local chefs. "Our vegetarian offering of the day gets sold out much quicker than the meat offering," said Alok Damodaran, who runs a South Indian food truck.

Restaurants and businesses in Tübingen

A rather significant detail considering that this part of Germany, Tübingen in particular, is known for its sausages, especially the spicy and smoked ones! This young and energetic spirit fits perfectly novelties and different projects: Amelie Dietenberger and Kajetan Krott started making vegan desserts during the pandemic, first for home consumption, then for deliveries, up to turning it into a business supplying to several cafes. "People are so supportive because it's a local initiative, and they especially appreciate that we deliver it in an electric car," said Dietenberger. Another interesting project is the one of Sedat Yalcin, who opened a vegetarian and vegan bakery together with his wife Aysenur-Sarcan Yalcin, after coming here for an exchange program: "Students love what we sell, but also people who are not vegan or vegetarian but care about the environment and want to try to improve their diet as much as possible".

Of course, there is no shortage of environmentally friendly initiatives: high parking fees and well-integrated bike lanes make Tübingen a bike-friendly city. Since last February, cars are no longer allowed to drive on the city's central streets, which will be reserved for buses and bikes. Students can travel on buses for free on Sundays after 7 pm, while bus travel is free for everyone on Saturdays. Among the projects in the pipeline, the local government is planning on making buses free all the time for everyone, to encourage even more people to give up their cars. Particular attention is also paid to the various types of packaging: there is an extra payment of 20 cents on disposable ones, starting from disposable cutlery and the foil around takeaway food, but no recycled material. The aim is indeed to promote the reuse of containers, and disposable products are therefore banned, regardless of their production cycle. In short, a virtuous town hard to imitate, given the young average age of its population compared to most cities, but that can certainly sets an example for community initiatives and sustainable projects.