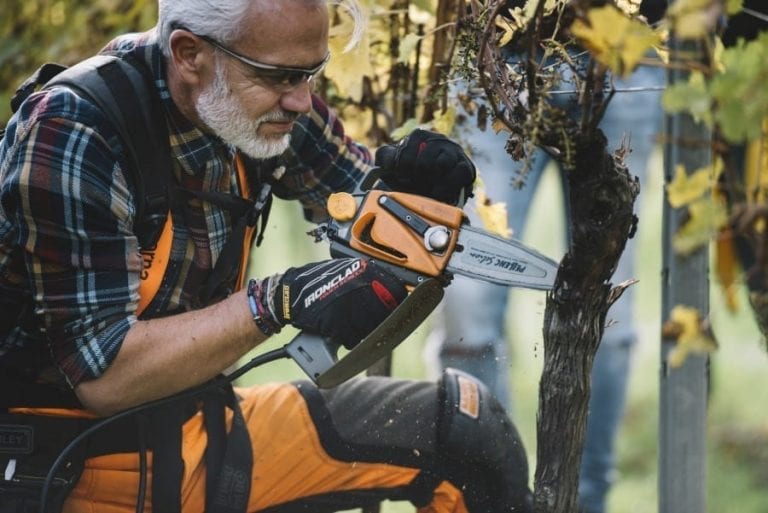 Since 2011, pruners Marco Simonit and Pierpaolo Sirch have been working to restore major vineyards by means of the Dendrochirurgia method, or Tree Surgery, a procedure designed to defeat one of viticulture’s most serious diseases. Here's the whole story.

Chateau Reynon, Schiopetto and Bellavista can sleep easy. Their vineyards are safe. Even more, the quality of their wines and the economic resources of their wineries are safe as well. These estates saw their vineyards reborn after an attack of esca, the grapevine disease. The credit goes to pruners Simonit & Sirch. Since 2011 they have been working to restore these vineyards by means of the Dendrochirurgia method, or Tree Surgery, a procedure designed to defeat one of viticulture’s most serious diseases. A true calamity, esca attacks the dry wood, degrading it and bringing about the collapse of the vine, which must be pulled up and replaced with new young plants. We asked what the surgery consists of. “Simplifying, you can compare our surgery to what a dentist does to care for a decaying tooth,” explained Marco Simonit. “Using little electric saws, we open the trunk and take out the part that has been attacked by esca disease. We have to analyze the trunk and branches that show us the location and development of the decay inside the plant. The funguses responsible for the disease attack and penetrate through pruning wounds. They create a damp zone in the vine where the disease attacks and destroys the wood, reducing it to a spongy, crumbly mass. At this point, we intervene, purifying the plant. In a short time, it will recover its vigor, make fruit again, and return to full productivity.” Marco Simonit is one of the creators of this method, and together with Pierpaolo Sirch and his Italian team, he has become an institution among the most important Italian and French estates.

Today, after six years of experimentation and work, the results are astonishing. Ninety per cent of the plants that were treated have returned to being fully productive and 10,000 vines of five different varieties (sauvignon blanc, chardonnay, cabernet sauvignon, cabernet franc, pinot nero) have been rescued. “When the vines return to their vegetative life and process the most water is the moment when esca disease can attack, said Marco, maître tailleur de vigne. “Nevertheless, we can intervene even during the chronic phase of the sickness and manage to restore the plant to health. Tree surgery, described by Louis Ravaz and Lafon, is a practice that has been known since ancient times. M. Poussard, at the end of the 19thcentury, practiced it, achieving encouraging results. We met with Professor Denis Dubourdieu, who died last year, director of the ISVV, the Istitut des Sciences de la vigne et du vin of the University of Bordeaux, and we perfected the technique using modern tools.” But above all, the team was able to save producers 50,000 euros per hectare, the cost calculated by Denis Dubourdieu for replacing a vineyard of 10,000 vines in the Medoc.

Over the years, the technique of intervention was improved, so that almost all the vines present in six winegrowing regions in Italy and France were rescued: Collio, Isonzo, Franciacorta, Bolgheri, Champagne, Burgundy and Bordeaux. “Right now our team works for at least two years alongside those who are beginning to operate with dendrochirurgia, Tree Surgery. We develop an identity card for each vine, trying to make it productive again,” concluded Marco Simonit. “We are totally satisfied with the results we obtained, but we can’t stop here. We have to, for example verify which is the best period for operating on the vines, how often we must do it, and for how long the vines that have been operated on will stay symptom-free. We are working not only in Italy and France, but also in Chile where sauvignon and cabernet franc vines are those most badly hit by esca disease”.