Travel. Castilla-León: the mushroom tradition and nature of Soria 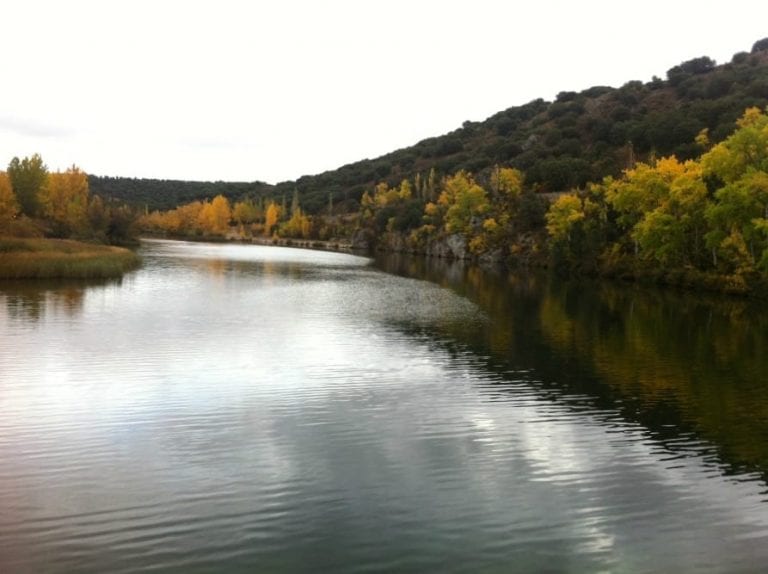 The area is locked in between areas with different characters – Cantabria, Basque Country, Madrid, Extremadura, Galicia, Portugal – yet, despite being influenced by all these bordering cultures, it has maintained its own solid identity. A place known for its undulant climate and landscapes, for its untamed nature, contrasts between history and modernity, and for its complex soul, immersed in a history still visible on its city walls. Welcome to Castilla-León, the European Union’s largest region which curves around the grand Duero basin. We visited the Duero Valley, in particular Soria and its province.

The Duero river is the region’s backbone and protagonist of the area. Along its banks developed the Castilla-León landscape, with an immense variety of wildlife, plains, forests, chasms, green patches concealing abandoned churches. Like in the case of Rio Lobos Canyon National Park in the provinces of Soria and Burgos. A deep canyon surrounded by sheer cliffs and rocky peaks covered in maritime pine trees and juniper, home to vultures and eagles, hawks and deer, wild boar, squirrels, otters, badgers and bobcats. 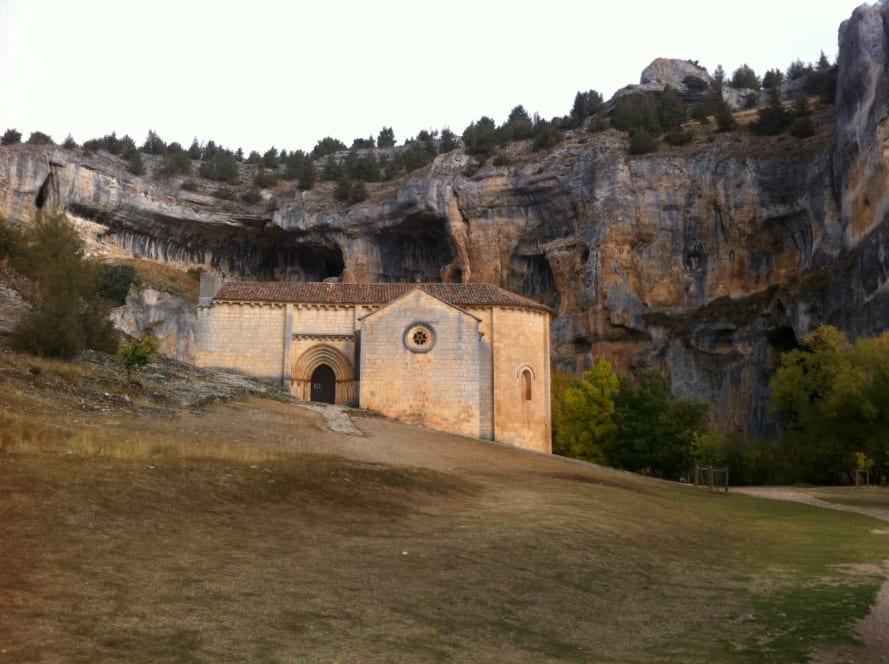 This is also the location of San Saturio Hermitage, a XVIII century Baroque structure built on a cave by the river. The surrounding landscape is astounding, thousands of hues that in this time of year embellish the Hermitage’s natural setting. 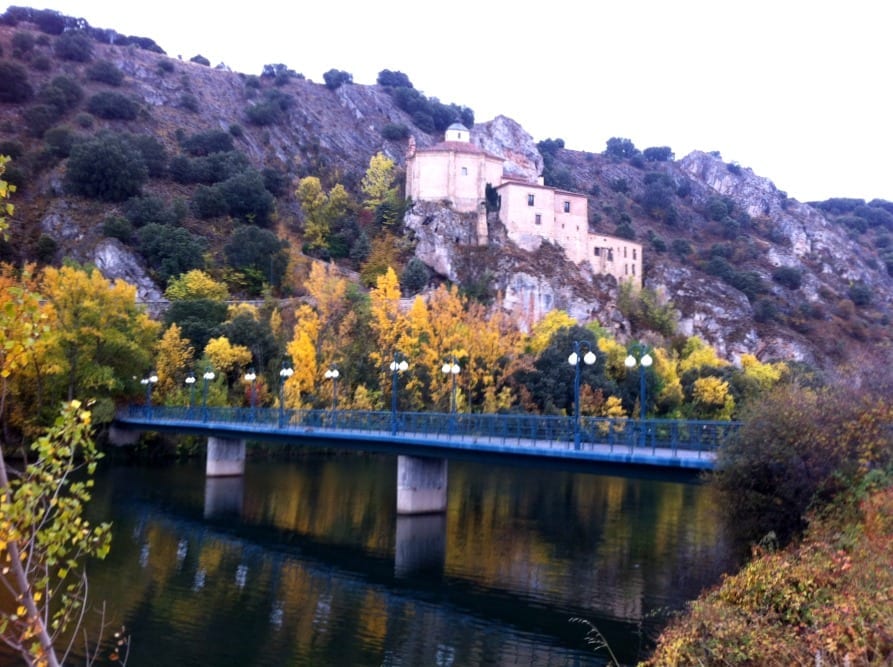 Following the footsteps of poet Antonio Machado  at the turn of the 1900s, a path connects the Hermitage to the San Juan Del Duero Monastery. The single wood-paneled nave ends in a semicircular apse and a lancet arch composing the XII century construction. Different architectural styles are discernible: Gothic elements alternate with Mudéjar style, especially in the cloister dating back to the XIII century. 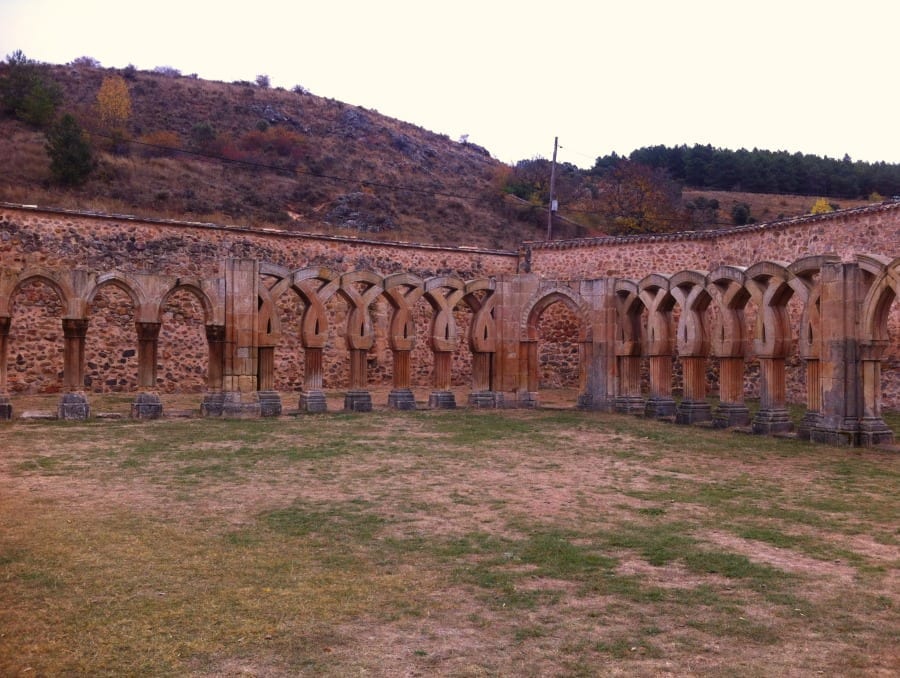 Approximately 70 Km from the Monastery, in the high Duero Valley, are the architectural marvels of Burgo De Osma and its Assunta Cathedral, dedicated to the Assumption of the Virgin. Again it is built in different era styles from Medieval 1200s to 1700s. Then there’s Santa Maria Church at Aranda del Duero, not far from Peñaranda del Duero, a historical site on the wine route that lends the name to the Ribera del Duero denomination. The Plaza de los Duques in Peñaranda del Duero reflects elements of typical Castilian architecture and the Renaissance spaces of the Counts of Miranda Palace, with its facade in Plateresque style, Mudéjar decorations and one of the region’s most fascinating wood panelled ceilings.

Landscape and architectural beauty aside, a large portion of tourism is drawn to this part of Spain, especially in Autumn, is the area’s mushroom foraging tradition.

There are 700 mushroom species present in the wooded areas of the province, which attract worldwide mushroom foragers. Picking boletus and other porcini varieties is of increasing interest to families with children. This includes foraging truffles too. This is another of the area’s richness, which counts 45 million hectares of truffle bedland. Four-hundred of these are under official forestry protection. Some of the best known truffle and mushroom-foraging areas include the forests of Pinar Grande Mycology Park with its 12,500 hectares yielding over 200 tonnes of edible mushrooms per year. 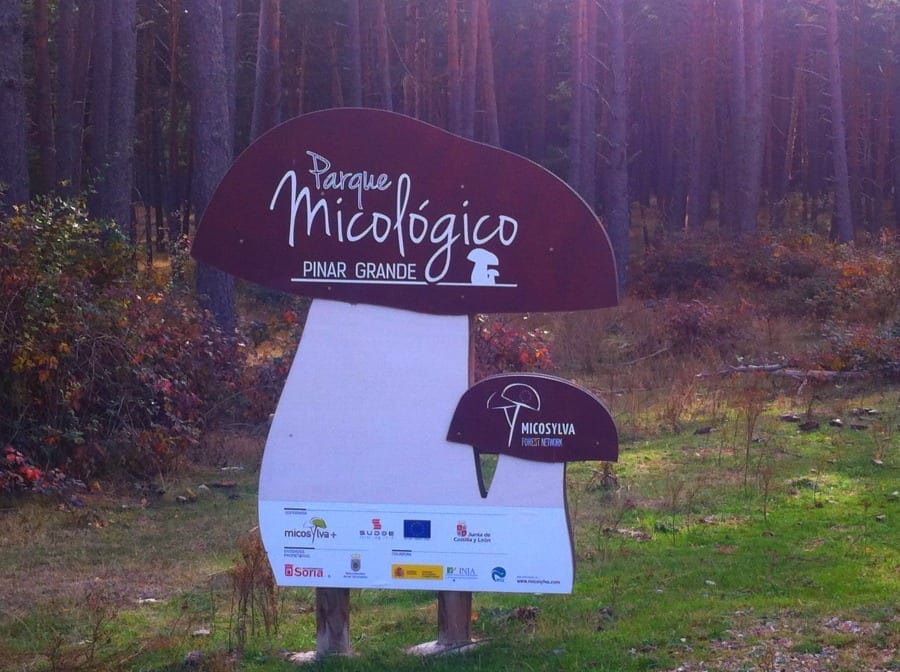 Collectors sell their foraged goods at Mercasetas, a space devoted to local mushroom and truffle products foraged by local and amateur artisans. The market also serves creative mushroom-themed tapas prepared in the market’s own “mushroom kitchen”. 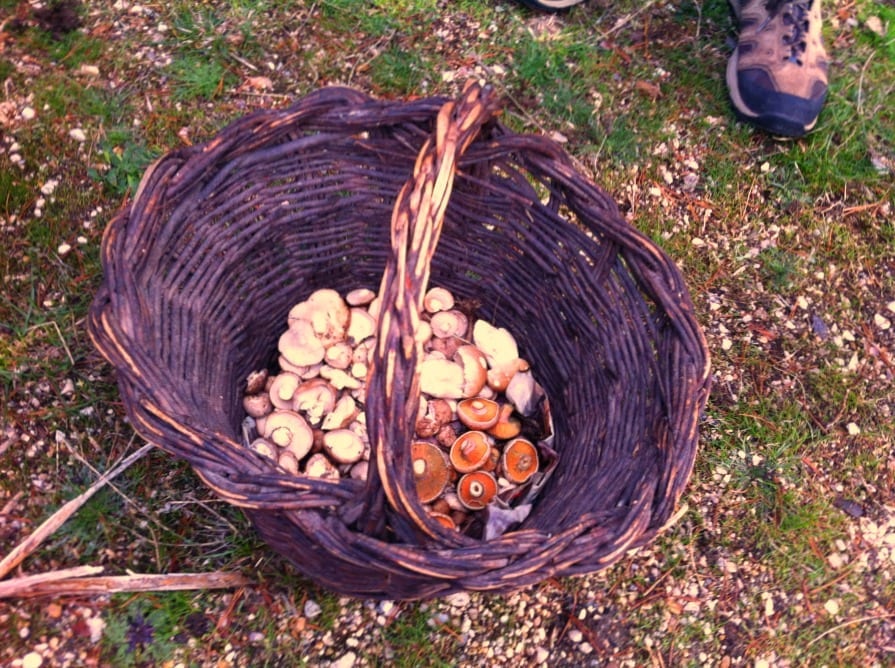 The mushroom tradition fosters a series of events and festivals that celebrate the best foragers, truffle dog shows and international food conferences. Among these is Soria Gastronomica, mushroom fair held annually for the past 5 years which focuses on sustainability, territorial belonging of local products and their transformation in the kitchen. The festival attracts professional chefs and specialized press internationally. This year, on 24 and 25 October 2016, it hosted 16 chefs of different countries.

The only Italian was Enrico Crippa (Piazza Duomo restaurant in Alba). For years his commitment to promoting white truffles from Alba backed his address during the conference: “My kitchen has banned truffle infused oils and other scented oils. I only use fresh white truffles from Alba”. The success of a fine restaurant is in the details, “technique and the skills of a chef, the ingredients and marketing which must be direct, clear and honest”, starting with tracking all stages of the supply chain. Crippa sources much of his ingredients from his famous garden: “I exchanged cooks for farmers as part of my staff because I feel the soil reflects the sensibility of those tending it”. His freshly foraged salad is dressed at the table, “to allow customers to savor the authentic flavor of just-picked vegetables and wild herbs growing in my garden” His egg “in cereghin” with anchovy sauce, Swiss chard and white truffle is equally the result of careful study, curved backs working the soil, hands chapped from picking. Each of the dishes tells a life story, an approach towards cooking based on deep mutual respect and the worship of the land which – “if attentively cared for by expert farmers” – is capable of yielding a gastronomic treasure. 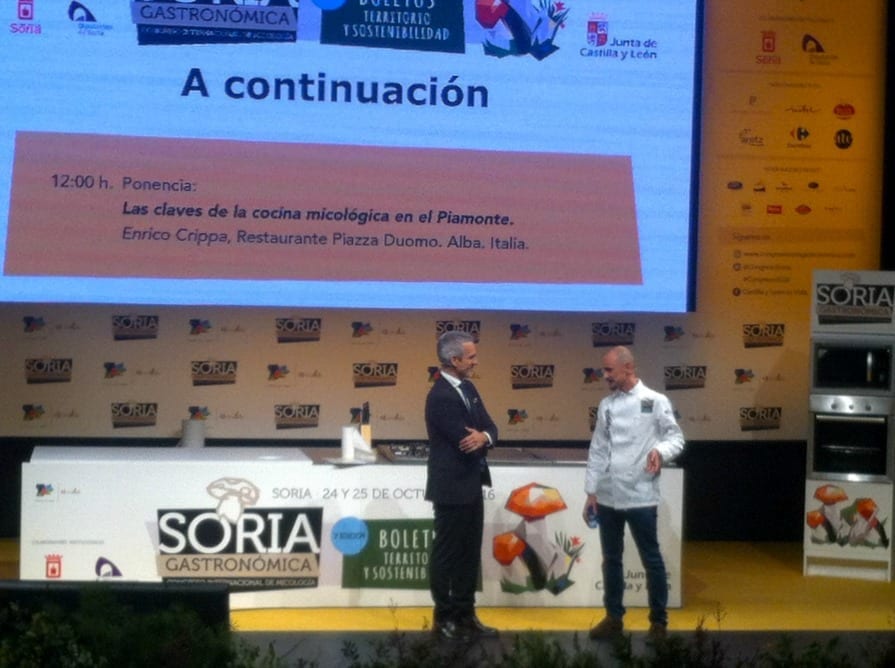 In the Soria province in the period that goes from the end of October to the beginning of November, many restaurants and tapas bars have mushrooms and truffles on their menus. As it often happens, the younger chefs lend dishes a fresh, modern touch to an ancient and respected tradition. This is the case at Baluarte, Soria restaurant in the hands of young Óscar García, who in the past trained under Alvargonzález in Vinuesa. His cuisine is in constant evolution and employs only the best locals ingredients, handled with innovative techniques. From appetizers to desserts, everything is made using mushrooms. 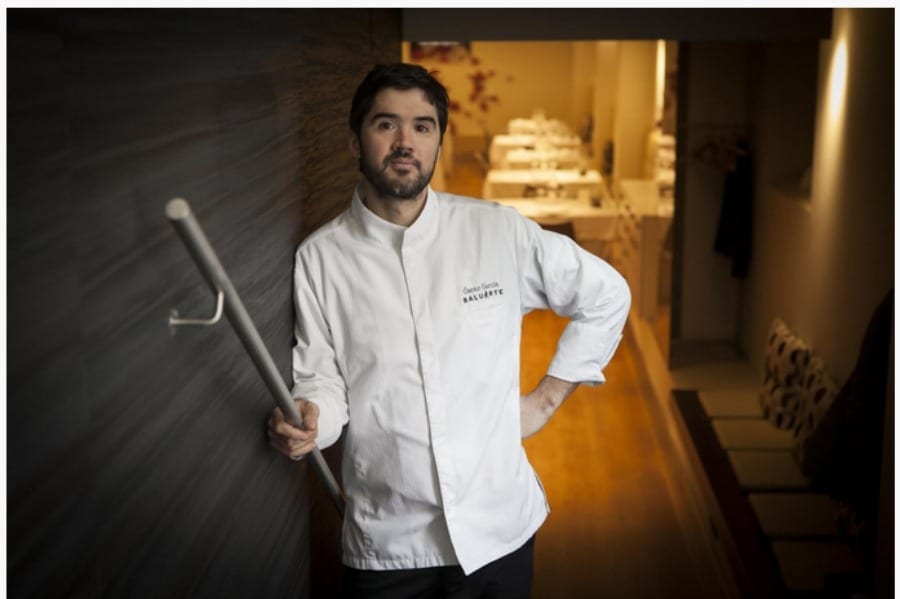 From a young promise to a well-established venue: La Lobita, Michelin starred restaurant located in the city of Navaleno. In the kitchen is chef Elena Lucas, with 13 years of experience in putting her childhood memories on a plate: “all my dishes are inspired by the long walks in the woods of my childhood. I remember the perfumes and scents of the forest, of the soil, and mostly of the pine trees”. 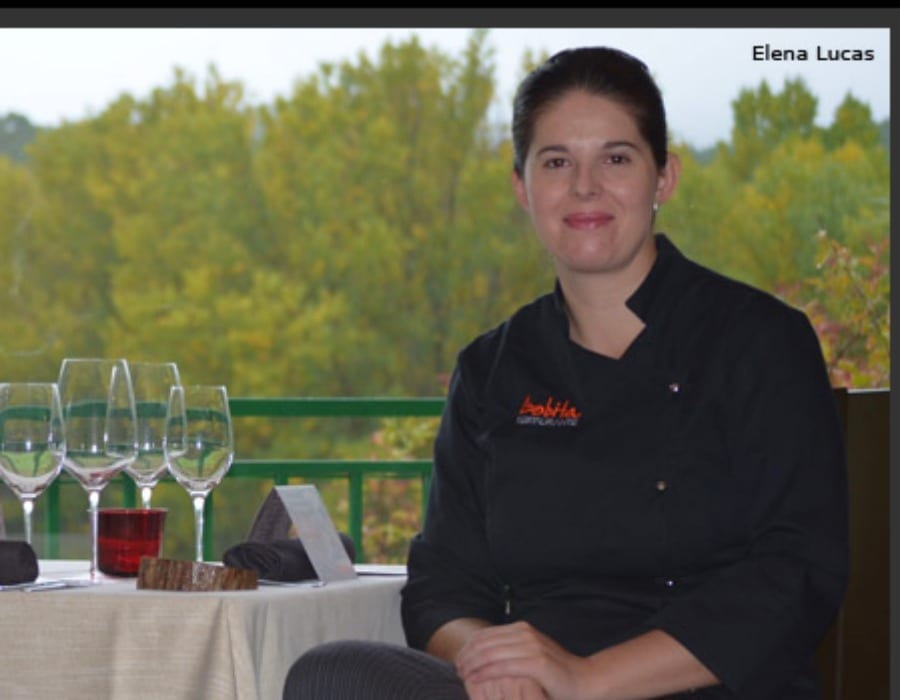 This very sensorial memory is what inspires her creations, redolent and full of local products of the forest floor. More inspiration for Elena’s dishes: “Another dish that’s tightly bound to my childhood is “rabbit on the sea” inspired by a nursery rhyme classmates and I would sign on school field trips” she adds. “I put all the elements of the song in the dish, a rabbit, the sea – represented by raw shrimp and seaweed. There’s also a pine forest, this element inspired the creation of a pine caviar, made with the dried flower of the pine tree”. The woods are furthermore present in Elena’s desserts, like the chocolate and anise cremino made with bee pollen and caramelized mushrooms: “the dessert is the hardest dish to make. I must concentrate all my memories of the hikes and forest walks in a single unified result that’s sweet as well as balsamic borrowing from the pine cones and forest floor”.