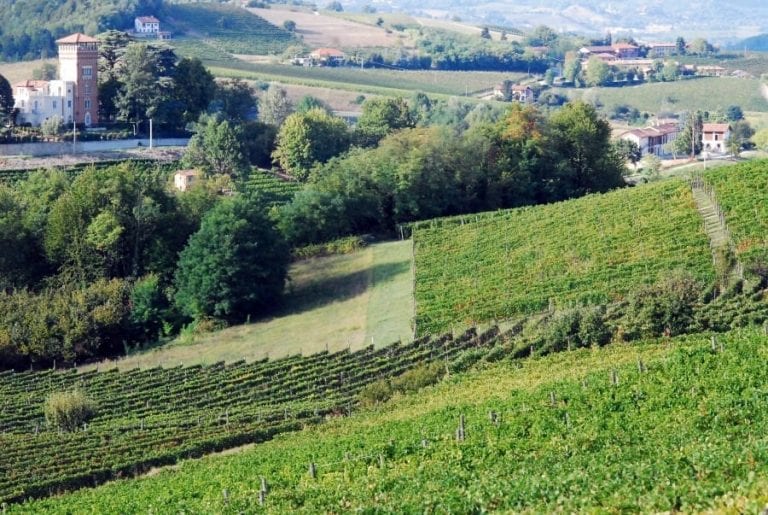 To understand the world of Moscato and Asti, you must immerse yourself in the territory where it’s made. Only a few minutes off the highway between Asti and Alba, is the landscape of vines, isolated farmhouses and soft hills that UNESCO has listed as a World Heritage Site.

We drive up the Val Bera towards the Caudrina winery in the Castiglione Tinella zone. Waiting for us in a four-wheel drive able to handle the vineyards’ steep slopes is Romano Dogliotti, one of the hallowed fathers of Moscato d’Asti. During the harvest, there are teams to coordinate, vehicles full of golden grapes coming and going between the vineyards and the winery’s presses. The activity is intense, but he takes the time to stop and talk in front of a landscape of hills that stretch as far as the eye can see. Mountains are in the distance, Neive is in front of us, a few hills away. Dogliotti shows us the label of his LaSelvaticamoscato, designed by the renowned Romano Levi, famous for his hand-drawn labels and for his artisanal grappa. “It took him a month to do the label for my Moscato, but it preserves the memory of a great friend.”

The history of Asti

Men like Dogliotti have shaped the recent history of Asti, a world unto itself in the larger picture of Italian enology. On one side is a handful of great ‘industrial’ names that have control over most of the market, and on the other are about 4,000 families of producers, small farmers or grape-growers like Dogliotti who decided to create their own wines.

Today the image of Asti Spumante and Moscato d’Asti is of the millions of bottles produced and sold around the world: Russia, the United States, Germany, Great Britain and now even China. “In 2012, when I became the president of the Consorzio, I found a product with an image that was a little old, dusty,” said Gianni Marzagalli, president of the Consorzio per la tutela dell’Asti DOCG, the organization that looks after Asti’s producers and products. “We are intent now on updating and improving this image because we have a territory and a variety that are unique, incomparable.” The aim is to move beyond the idea of a supermarket product uncorked only for parties. Instead, the goal is wider consumption that, since the alcohol level is low, can compete in the market for non-alcoholic beverages. “It’s a wine that appeals to women, a percentage that rises to 70% in Russia,” pointed out Giorgio Bosticco, the Consorzio director.

In Canelli, the city where Italian spumante was first produced in 1865, it was called Moscato Champagne. That was a time when the French were less careful about protecting their brand name. Canelli has great underground cathedral-like spaces, the cellars of the historic houses excavated under the hill that dominates the city. Moscato and Asti are laid down in these cellars. Innovation and tradition vary with winery policies, but Luigi Coppo, who represents the most recent generation of a firm founded in 1892, emphasizes that the moscato produced here can use the new attribution of “Canelli”, the zone historically perfect for growing this grape. He explained that contrary to what is commonly thought, “This is a wine that can age 2 or even 3 years. It can be paired with savory foods, too, such as blue cheese or prosciutto, as they do in many places in New York.”

There is a hidden Canelli, the one of the underground ‘cathedrals’, the ancient cellars dug in the calcareous tuff, with temperatures that stay constant between 12° and 14°C (54°-57°F), perfect for storing Moscato and Asti Spumante. The arrangement is so spectacular that it won UNESCO’s recognition as a World Heritage Site. The vast subterranean cellars have the atmosphere of real cathedrals, long tunnels walled in brick, barrel-vaulted, columned. Today there are four great maisons open for visitors.

Coppo. This is a family winery founded in 1892, now managed by the fourth generation. It is dedicated to the production of metodo classico spumanti, but also produces classic Barbera, Chardonnay and Gavi.

Contratto. In an art deco palazzo in the center of Canelli, the historic label was passed on from the family that opened the winery in 1867 to a great producer in the Langa, Giorgio Rivetti. The magnificent underground cathedrals, 40 meters down, are the largest of all, about 5,000 square meters.

Bosca. He launched his wines in the world thinking of the emigrants that had left for the Americas, and opened offices in Buenos Aires and New York. His cellars display his special interest in art, including an extraordinary work by Eugenio Guglielminetti, a brilliant stage designer. The cellar also holds a splendid collection of spumante glasses: the oldest is from the 18thcentury.

Gancia. This is one of the most famous names, but the winery doesn’t any longer belong to the family of Carlo Gancia, the inventor of the first Italian spumante, who founded it in 1850. It was purchased by the Russian magnate, Roustam Tariko. Production, obviously, remains here. The secret labyrinth of cellars snakes for about a kilometer, and the path ends up in an exposition space of 500 square meters that re-evokes the history of the house.

A Great Woman of Wine

Among the 55 women producers who belong to the Piedmontese section of Donne del Vino, there are a handful of indomitable producers of Moscato. One is Mariuccia Borio who, in the 1970s, inherited from her father (she was an only child) the Cascina Castlet in Costigliole d’Asti. She decided to produce wine with passion and great respect for the territory and its traditions. She rescued an indigenous variety, uvalino, and aimed at research and modernity, as shown even in her bottle design. She speaks passionately about her Moscato d’Asti DOCG, a unique, cheerful, fresh and aromatic wine. Although it is a perfect dessert wine, she also serves it with garlic bread, as local vignerons have always done. She produces also a dried grape version, Aviè, that goes well both with Piedmontese pastry and blue cheeses. There are elegant touches everywhere: for example among her vineyards she hosted one of the Big Bench works by American artist Chris Bange, a welcoming gesture and a wonderful place to enjoy the landscape.

by Dario Bragaglia and Rosalba Graglia

An ancient inn with stables has become an elegant award-winning restaurant. This is the domain of Mariuccia Ferrero, in love with her territory, with truffles and Moscato. She prepared, in Doha, Qatar, the dinner to celebrate the entrance into the UNESCO World Heritage Sites of the Langhe-Roero and Monferrato winegrowing landscape.

In the historic site of the wine bar, within the 19th-century walls of the old cellar, a celebrated traditional restaurant with a great choice of wines.

A farmhouse in the country, it has been a restaurant since the end of the 19th century. Family run, typical atmosphere, traditional recipes and a good wine list.

Five stylish rooms in the town center, in the tranquillity of an internal courtyard. Breakfast served in the Bosca pastry shop.
La casa in collina| Canelli (AT) | reg. S. Antonio, 54 | tel. 0141 82 28 27 | www.lacasaincollina.com| | double room breakfast incl. from 110 euros
Charming agriturismo in an old-fashioned Piedmontese farmhouse among the vineyards, straight from a novel by Cesare Pavese. Six rooms in different colors, abundant buffet breakfast with local specialties.

I tre poggi | Canelli (AT) | reg. Merlini, 22 | tel. 0141 82 25 48 | www.itrepoggi.it| double room breakfast incl. from 120 euros
More than a hotel or an agriturismo, this is a charming residence in an 18th-century farmhouse among the vineyards: eco-sustainable, 9 rooms, one mini-apartment, a small fitness center, and a restaurant serving local dishes and biodynamic wines.

For almost 40 years, Sergio Bosca has owned this pastry shop in the center of Canelli, dedicated to his territory. Zero kilometer specialties featuring Piedmontese pastries and an infinite number of variations on the hazelnut and chocolate theme. Holiday sweets are featured, beginning with the classic Piedmontese panettone, obviously dosed with Moscato.