The king of ‘nduja raises the London game 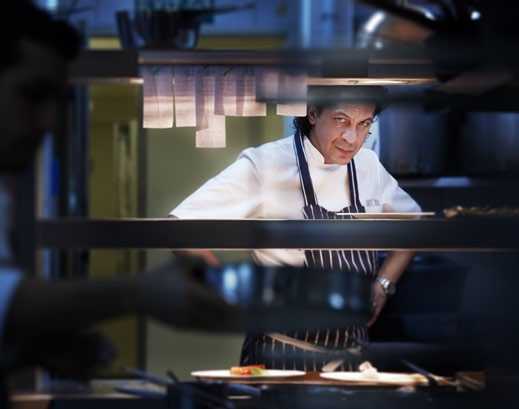 “We can no lon-ger be ashamed of our traditions. If a French has dinner guests over, he will be ea-ger to serve them his grandmother’s cheese, presenting it as his most trea-sured specialty. In a similar situation, an Italian would be ashamed of the smell.” Francesco Mazzei, speaks frankly. Born in a small town in […]

“We can no lon-ger be ashamed of our traditions. If a French has dinner guests over, he will be ea-ger to serve them his grandmother’s cheese, presenting it as his most trea-sured specialty. In a similar situation, an Italian would be ashamed of the smell.” Francesco Mazzei, speaks frankly. Born in a small town in Calabria, Cer-chiara, he escaped the mafia, travelled the world and came back to his native Italy before settling down in London, his second home. After routine entrepreneurial steps, the leap in quality came with L’Anima located in the heart of the City. He then re-launched the Sartoria venue on Savile Row, the street of tailored suits. The restaurant was ranked the highest with Tre Gamberi rec-ognition in our Top Italian Restaurants guide. Furthermore, in the last 12 months he opened two other restaurants, Radici, a southern Ital-ian style trattoria, and then Fiume, in Battersea. We visited him and here too everything is al-ready running at full speed. Pragmatism, vision and entrepreneurial spirit: Mazzei managed to break the bank in the very city where the major-ity of Italian chefs didn’t make it. Think Cedroni, Barbieri, and also the non-native Heinz Beck. Mazzei showcased his origins and the products of his land, betting everything on his beloved and ever-evolving homeland, southern Italy and its broken roads: the place he has dedicated his book to. They call him King of ‘Nduja for show-casing the versatil-ity of typical soft and spicy Calabrian pork sausage, proof of this is the crazy boom in sales of his signature pizza. The chef now focus-es on flavours of the Italian South, be-cause why shouldn’t a Basilicata peas-ant dish like sweet c_r_u_s_c_h_i_ _peppers and salted codfish have the same dig-nity as hare à la royale? In his restaurants, man-icured to the last detail, and sometimes cleverly flattering yet thoroughly tried and tested, he puts classic recipes at the centre. Trattoria style recipes and service-forward context are star-level, like in the case of Sartoria, with its exceptional wine list and lesser-known labels. Brits love the traditional appearance of Italian cuisine. Mazzei simply re-proposes it with a dif-ferent, more elegant outfit. Tailor and chef. The tables are graced by eggplant parmigiana, Sar-dinian f_r_e_g_o_l_a_, ravioli filled with burrata, Mila-nese style breaded cutlets, and the ever-present tiramisu, which is actually quite good in all his restaurants. His is a reassuring cuisine that risks little but always hits the target, allowing his British patrons to virtually travel along the sunny and uneven roads of the Italian South. His winning intuition was understanding that get-ting his hands dirty with humble flavours would be the winning move. Today he is a star in Lon-don. “Regionality is the future of Italian cuisine abroad.” And this is only the beginning.. –Lorenzo Ruggeri