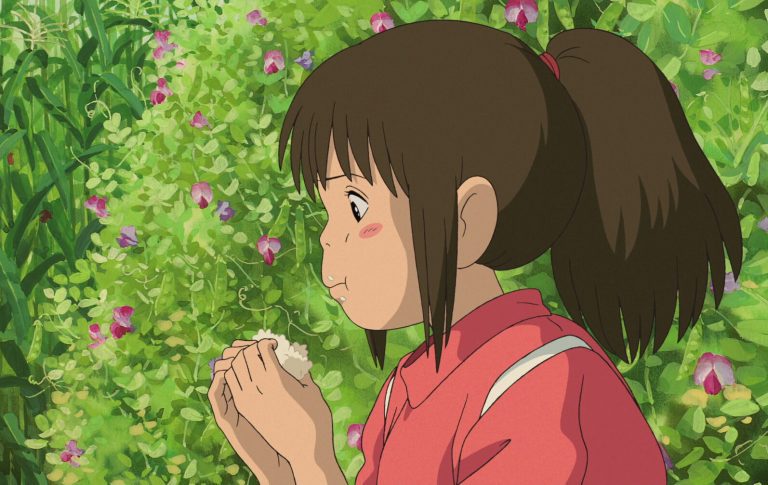 As an undisputed master who has bewitched audiences of all ages, Hayao Miyazaki has fascinated adults and children alike with the many dishes depicted in his films. A book explains the relationship between cinema and gastronomy in his works.

Miyazaki and the role of food in his films

Touching stories and mouth watering foods. The magic of artist Hayao Miyazaki lies in this, in his extraordinary ability to narrate timeless stories, creating complex characters that are apparently delicate and fragile, but capable of unleashing all their tenacity when needed. A delicate and intimate storytelling, which also makes its way through food, which in his works becomes a symbol of interaction, growth, comfort but also evolution. This is why authors Silvia Casini, Raffaella Fenoglio and Francesco Pasqua have chosen to dedicate a book to the dishes he portrays: "The enchanted kitchen. Recipes taken from the films of Hayao Miyazaki'' (published in Italy by Trentaeditore), a cookbook that investigates the role of cuisine in the works of the Japanese author, "food that becomes the bearer of commitment, gratitude, an emblem of affection and solidarity." Each dish therefore assumes a pivotal role in the development of history, at times reassuring, at others nostalgic, and every detail "becomes a pretext to strengthen and transmit the powerful link between food and memory." 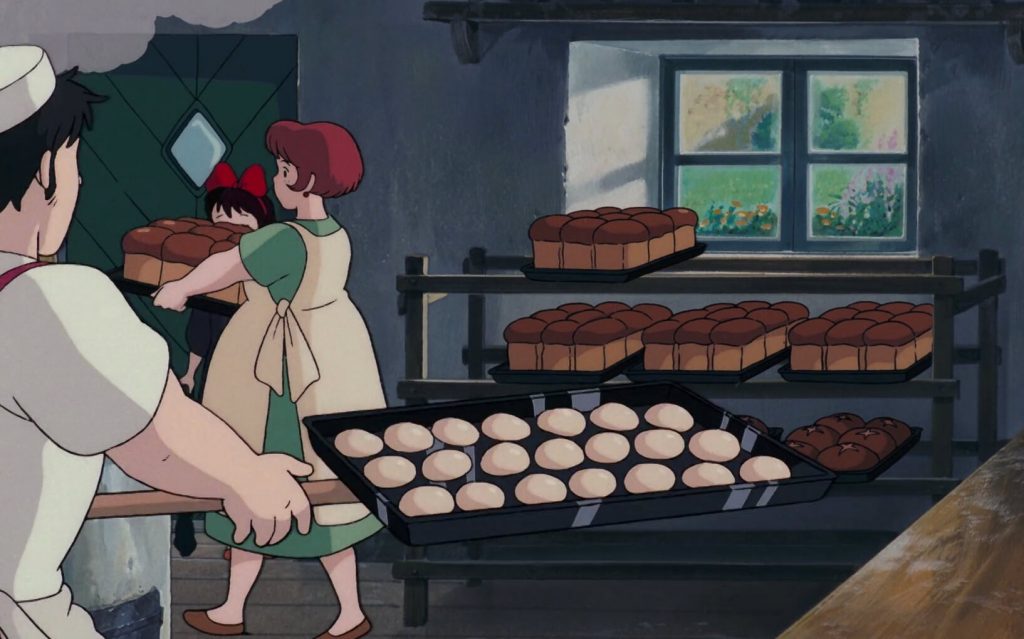 The magic of food in Miyazaki's work

It'0s impossible to watch a film by the director without being enchanted by the beauty of the table. Food too, is magic after all, and Miyazaki "is a magician, a charmer capable of translating his and our inner world into a surprising cinematic language, just as poets do with words." And it is no coincidence that all the dishes presented are aesthetically inviting, "patience and attention to detail have always been his essential ingredients." Colourful and tempting, the foods in his films "refer to the ancestral harmony of creation." The book includes the most famous recipes, in the traditional Japanese version, in the Western version and also in the vegetarian one. In any case, the key word is wonder, "cinema, cuisine and life are amazement." There is no shortage of anecdotes and curiosities about some Japanese traditions such as bento, the lunch box represented in "My neighbour Totoro," a glossary of Japanese cuisine, as well as short but accurate descriptions of the films in question. 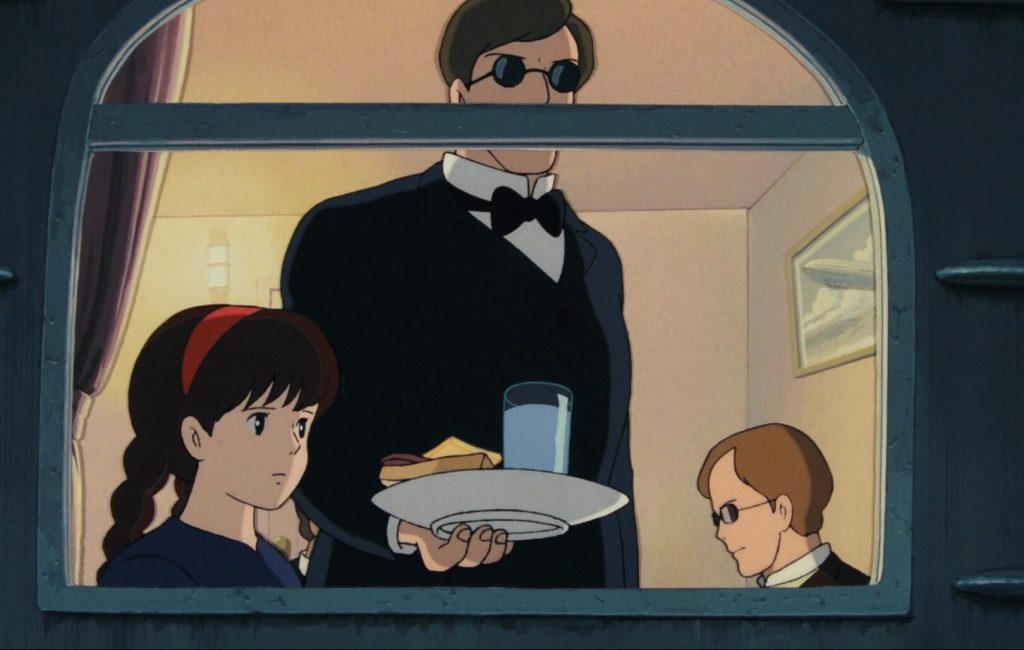 The recipes of the Miyazaki movies

There's the spaghetti of Lupine and Jigen and those of Nausicaä, all "seasoned" with curiosities about the production of the films. For example, in 1985 New World Pictures released in the United States "Warriors of the wind", an English version of "Nausicaä of the Valley of the Wind," shortened by 22 minutes and with different names for the characters: Miyazaki not only prayed to the spectators to erase this version from their memory, "but from that moment on he had a 'no modification' clause included in all foreign distribution agreements of his works." The cookbook continues with Sheeta's nimono in the 1986 film "Castle in the sky," the traditional stew used by the character to recreate the warmth of their lost home, "the presence of food in the films is never accidental, as it tends to establish both the social class of the characters as well as the relationship between them." And again the herring and pumpkin flan by "Kiki delivery service," one of the works in which the most space is given to food, the Amatriciana spaghetti with bacon in "Porco Rosso," the film that winks at Italy, without forgetting the famous bacon and egg breakfast of Howl's Moving Castle. 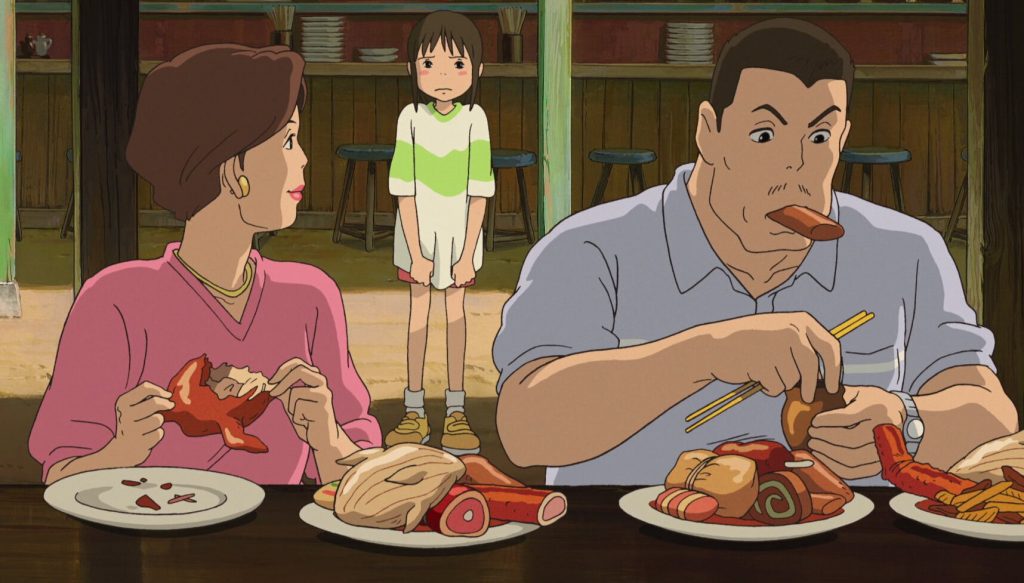 All forms of food from "The enchanted city"

One of his most popular masterpieces deserves a separate chapter: "The enchanted city" of 2001, a condemnation of consumerism in which the gastronomic aspect takes on "a value of balance, but also of identity." The dishes here are "a means by which the characters create a sentimental connection, they reassure themselves." Chihiro is a curious little girl who is about to move to another city, but her father takes a wrong turn and arrives in an apparently uninhabited place, actually populated by gods who do not look favourably on the presence of humans. Hungry, Chihiro's parents desecrate the food of the gods left unattended and for this reason are transformed into pigs. The little girl finds comfort in food, that same food that becomes a curse for others, as for Faceless, the spirit of a polluted river that is gorged until it can't take it anymore, overflowing and overwhelming everything. Miyazaki's message is loud and clear: "Man can only be saved if he puts a stop to his selfishness, only if he returns to a conscious use of the resources offered by nature." Sin of gluttony, voracity, excess but also salvation: food is all this, a godsend for Chihiro, who manages to save herself thanks to the food given to her by Haku, which allows her "to belong to the magic of that city, allowing her to continue her adventure."

Recipes inspired by the films: Sponge cake and herring and pumpkin flan

In a bowl, beat egg yolks, milk, vanilla seeds and sugar and a pinch of salt; add the sifted flour, the oil and mix with a spatula. fold in the egg whites beaten to stiff peaks. Put the resulting mixture in a pan and bake in the oven in a bain-marie at 160°C for 50 minutes. The more experienced can try their hand at covering the cake with a layer of ivory-coloured sugar paste.

Finely chop the onion and sweat it in a pan with a drizzle of olive oil. Add the steamed pumpkin and mash the pulp with a fork. Heat the butter over medium-low heat and add 2 tablespoons of flour; separately heat the milk and pour it in, mixing constantly. Season with salt and pepper to taste and stir until the sauce thickens. Transfer the mixture into a lightly greased ovenproof dish; then open the canned herring, drain and place them on top of the kabocha mixture. Place a thin sheet of puff pastry on top to cover the filling; using another sheet of puff pastry, cut out the design of the fish like Kiki's and place it on top of the puff pastry cover. Brush the surface with beaten egg, decorate with black olives and bake at 180°C for 30 minutes.