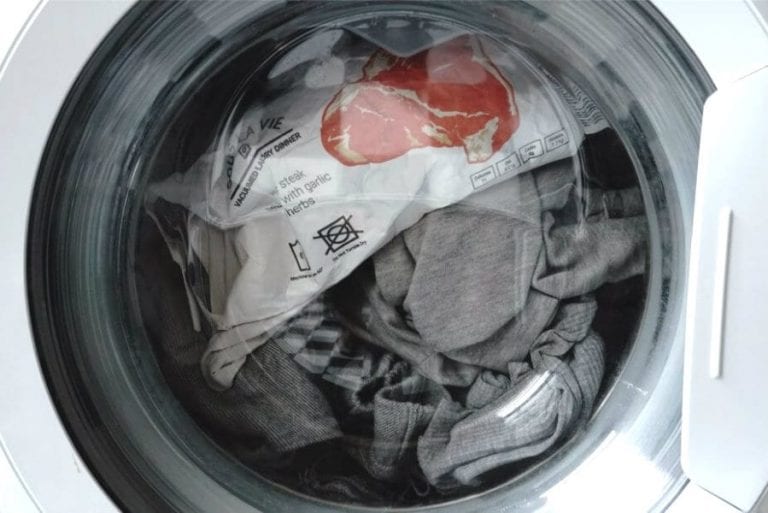 How often do you find yourself staring at the hypnotic cycle of the front-opening washing machine, while waiting for the laundry to be done? In a not so distant future you could be doing the same while waiting for dinner. Israeli creative Iftach Gazit of the Bezalel Academy of Arts and Design has designed special bags that let you cook food in the washing machine, along with your laundry.

Cooking in sous vide in the washing machine

Forget vasocottura technique (cooking in a sealed glass jar) in the dishwasher, that’s so last year. Now you can cook your meals along with the laundry, in the washing machine. The idea belongs to Iftach Gazit of Bezalel Academy of Arts and Design  in Jerusalem, who has designed special food-safe plastic bags that can cook foods in vacuum at temperatures between 50 and 100 degrees Celsius.

Many chefs have been seduced by this cooking method. Think of the Roca brothers, who studied it in almost manic fashion, even experimenting new cookware, such as the Rocook line. The Rocas are only one example of the sous vide cooking success, it’s now very popular among home cooks and amateurs alike. Cooking in vacuum allows foods to remain tender and conserves all juices intact –– otherwise lost at conventional cooking high temperatures.

The bags are called Sous la Vie and will most probably allow amateur cooks who love to experiment in their own kitchens, cooking in vacuum. The containers designed by Gazit are made in tyvek, a waterproof material with extra protection on the inside that avoids foods coming in contact with washing detergents. With the Sous la Vie bags foods can be cooked in the washing machine during an actual laundry cycle, taking advantage of the appliance’s hot water cycle.

Testing this method is easy: the labels on each box –– containing all the necessary ingredients –– lists the nutrients as well as the washing setting needed to get two jobs done: laundry and dinner.  As an example, vegetables cook with a quick cotton cycle, meats instead require a program for synthetic fabrics, at 60 degrees C.

Motivation? A hot meal for the homeless

What sounds like a fun idea for young singles is instead fruit of Gazit’s deeper reasoning. During a study period in New York, he noticed how coin Laundromats were the only warm and safe places for the homeless. “The Laundromat is a place where you can do a number of things besides washing your clothes” he explains. “You can re-charge your phone battery and fill bottles with free drinking water. For many homeless people, it’s also a safe place where they can rest a few hours. That’s when I thought you could also cook there”.