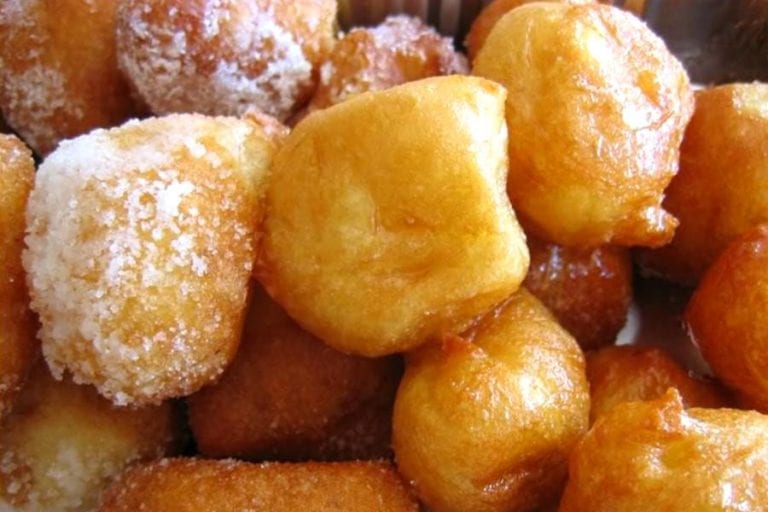 Carnevale means freedom, joy and wantonness. These are Christian traditions that draw from Dionysian rituals and Roman Saturnalia. In Sicily Carnevale is serious business, celebrated with beautiful costume parades and events that last a number of days. What is the traditional food eaten during the events that close today?  Let’s take a closer look at four unique Sicilian Carnevale traditions and their related specialties.

Whether pagan or Christian, Sicilian tradition is theatrical. The peak of this element happens during Carnevale. Piazzas and dinner tables transform into colourful canvasses on which the Carnevale catharsis is narrated through food. Letting all inhibition loose in costume garb is only a part of the Carnevale celebrations, for the most part promiscuity is through eating ridiculous amounts of holiday foods. Carnevale celebrations in Sicily have roots in antiquity; the earliest traces of such date back to 1612 when for the first time the Viceroy D'Ossuna allowed a formal ceremony in Palermo, repeated annually until 1741. From Palermo the custom spread to other provinces, each declining the festivity in their own way. Here are the four most evocative. In the small town of Acireale in the province of Catania, Carnevale was born spontaneously with Saturnalia organized from the citizens themselves. In a time of year when nobody was bound by limits set by social hierarchy, the town folk could mock those in power, nobility and the clergy. One of the area’s oldest masks worn during Carnevale is in fact the abbatazzu (also referred to as pueta minutizzu), which made fun of the local religious figures.

Nowadays the holiday is celebrated in the Baroque town centre of Acireale with similar elements to other sister cities in Italy. Like Carnevale di Viareggio and hosting masquerades from Venice. On Giovedì Grasso (Fat Thursday) large political satire floats parade down the main drag. Today, on Mardi gras, the main event is the floral float parade. Carnevale celebrations last 10 days and culminate today with the burning of Re Carnevale (King Carnevale) and fireworks. 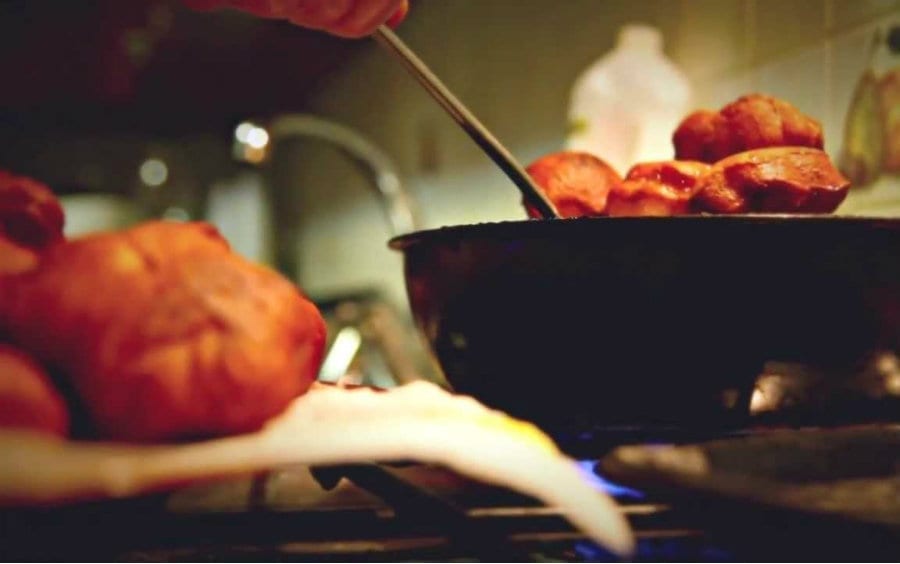 During this time, the main local Carnevale treat is pignolata: small fried dough balls also known as impannuccati, covered in honey and served on lemon leaves that lend the sweets a unique flavour. In the savoury department are the crispelle filled with fresh ricotta fresca and anchovies. These are eaten in the streets while watching the parade, or as an entree on Sundays during Carnevale season.

Historically a rival of the Carnevale celebrated in Acireale is the one in Sciacca. This particular festivity is well known outside of Sicily too. The origin is equally ancient and involving banquets of profuse masquerade, wine, sausages and cannoli. After WWII the Carnevale in Sciacca evolved to include allegoric floats mocking political figures and Vaudeville-type theatre representations. 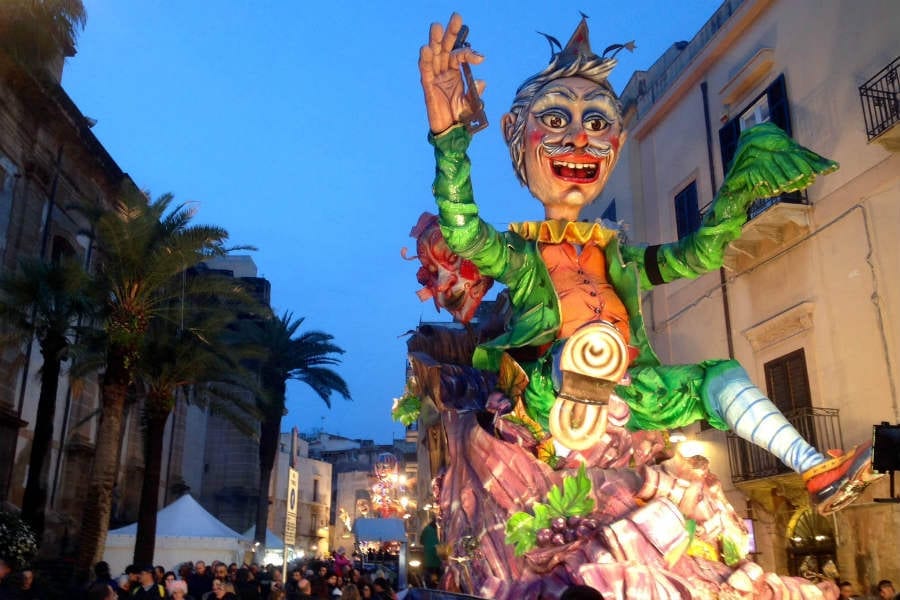 The building the floats in Sciacca is a special part of the holiday. The night before the final parade the floats are assembled in the street giving onlookers a sneak preview of the next day’s festivity. Carnevale here starts on Fat Thursday with a symbolic handing over of the town keys to King Carnevale, locally called Peppe Nappa, who opens and closes the festivity.

Peppe Nappa parades down the city streets bestowing wine and fire grilled sausages to the people for the entire duration of Carnevale. Tonight, Mardi gras, his paper maché dummy will be burned to the stake and fireworks will light up the sky.

To ea sausages and more:

In Termini Imerese, locals celebrate a relatively “newer” Carnevale, first documented in 1876 but in actual fact first born in 1848. During that time the town of Termini Imerese in the Palermo province hosted a number of Neapolitan families traveling with the Bourbon court after being ousted from the capital. It was precisely the napulitì, like they were called by the Termini locals, who promoted a celebration during Carnevale attended by the entire town, giving birth to the tradition of U’ Nannu ca Nanna (Grandpa and Grandma). The King of the Termini Carnevale Nannu is paired to a female figure, Nanna, the only female Carnival character in Sicily. She represents the continuity of the dynasty after the death of the king by fire. One of the most evocative moments of the holiday is the reading of Nannu’s will; in which key political figures and local celebrities are ridiculed.

Where to buy sfinci:

This is a town that connects its Carnevale celebrations to cheese. Specifically, the maiorchino, hailing from the Peloritani hills near Messina and made with raw sheep’s milk. Every year in Novara di Sicilia, Carnevale sees contenders known as maiorchino “rotolatori” (rollers) in a typical race called ruzzola. The origin of this tournament dates back to the 1600s and is held annually today, Shrove Tuesday – aka Fat Tuesday (Mardi Gras). Once male “rollers” exclusively did the racing nowadays women can also compete. The race consists of yo-yoing wheels of aged maiorchino weighing 10 kg tied to a string along a curvy path along the town streets and alleys. On the sides of the “race track” onlookers cheer three finalists selected during the previous week’s heats. 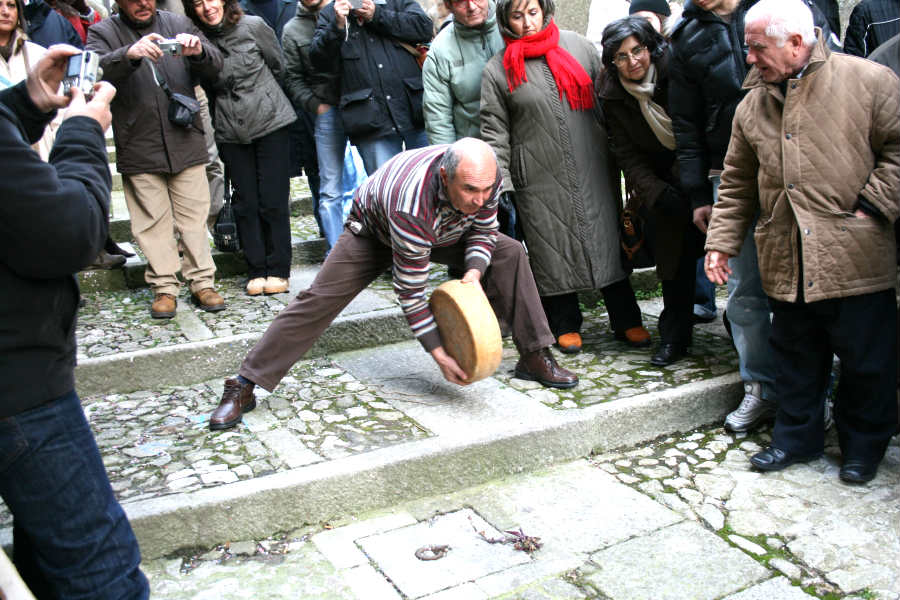 After the race, the festivity culminates with a food festival honouring the maiorchino cheese. During this event, cheese makers in 1600 costume offer samples to the town folk of their cheese, plus tastings of tuma and ricotta topicalities. Tonight the entire community dines together in the square, enjoying dishes made with maiorchino and plates of homemade maccheroni with pork meat ragout.