Roscioli: the story of the eternal city’s most famous baker 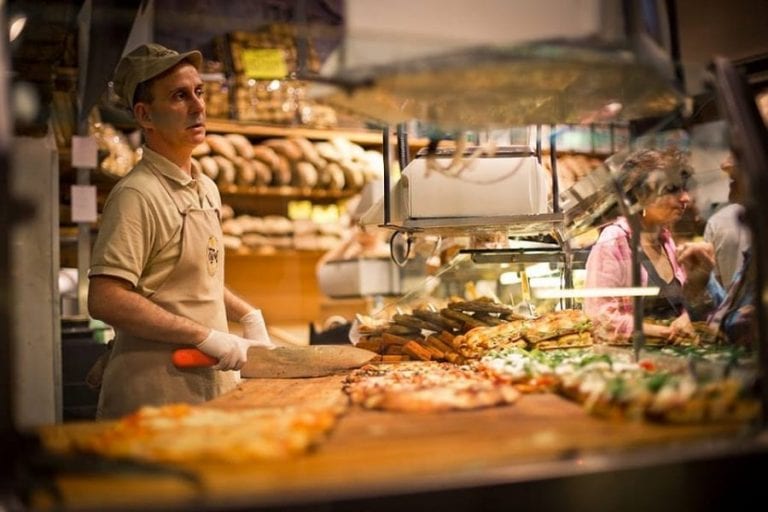 Elisia Menduni authors a book penned with the late Stefano Bonilli to narrate the events of the bakery which over the last decades has become a workshop, gourmet kitchen, wine bar and coffee shop – redesigning the Roman dining scene.

Roscioli in the history of Rome

Who among food aficionados does not know the history of Roscioli? We don’t want to sound too Rome-centric, but honestly the small family-run enterprise that currently has redesigned an entire block in the heart of Rome near Campo de' Fiori represents a worldwide fine dining and food worshipping magnet. In the last two decades – although the opening of Antico Forno Roscioli dates back to 1972 – both the via dei Giubbonari gourmet store and restaurant, and a few steps away the wafting aroma of bread and pizza by the slice on via dei Chiavari, have set themselves as beacons of taste, safe havens for those wishing to sit at a table for a fine plate of gricia during their Rome visit. Small shop, delicatessen, enoteca wine bar, gourmet restaurant, baker, now even a coffee bar with pastry shop. And now the latest enterprise, Bolla su Bolla. It’s all told in a book by Elisia Menduni, and it narrates the soul of Roscioli, the relationship it has built with the city that has witnessed such solid transformations, in total contrast with so many other businesses that continually struggle in the not so easy-to-tackle entrepreneurial platform that is Rome.

The book. And idea by Stefano Bonilli

Menduni’s work is enriched by beautiful photography by Maurizio Camagna, and the collaboration of many friends – the preface is penned by Massimo Bottura, in his words: “Roscioli is in Rome. The Rosciolis are Rome” – in addition to all the people who have closely admired the hard work of the Roscioli family. Among them people like Marco Bolasco, editor for the Giunti publishing house but equally invested in its drafting, and lending memories of his own “christening” in the Roscili shrine: it was 1999. The leitmotif is the homage to Stefano Bonilli, in April 2014 the book was his idea, shortly before passing away two summers ago. As Bolasco remembers, going back to work on the book at the time after Bonilli’s passing seemed impossible. Elisia Menduni, who worked closely with Bonilli clarifies it in her afterword. She remembers “many hours spent together in the last few years, the infinite talk on journalism, on writing, on food and dining while strolling together on the cobbled alleys of this part of Rome, which he had elected as his stronghold”. Add to this her attitude and inclination invested for the project to be completed.

From now on all this breadth of information and history will be bound under a single publication and sold in bookstores with a title that sums things neatly: Roscioli. The bread, the kitchen and Rome. In the words of Marco Bolasco, the book contains “the stories and lives of the Roscioli family and a little piece of the history and lives of those who in some capacity participated in them'”. In over 250 pages the book opens chapters on each: the streets of Rome, the happenings in the bakery, the salumeria deli and kitchen, the new bakery, the coffee house. The back of the book illustrates recipes and cereals, from wheat and spelt to rye, by way of seafood couscous, club sandwiches (try the ones served at Roscioli Caffè!), burrelle and much more.

How do the Rosciolis feel about the publication? In the words of Alessandro: “Being protagonists of a book means opening the doors of our home and letting readers in to our most intimate spaces. We don’t particularly fancy being in the limelight, we’ve always preferred talking via our products, our ideas and our hard work. This book is a veritable time jump into our past, a more attentive and conscious way of leafing through the family album”.