Moreno Cedroni launches his Orto Marittimo in Senigallia. For the restaurant and for the community 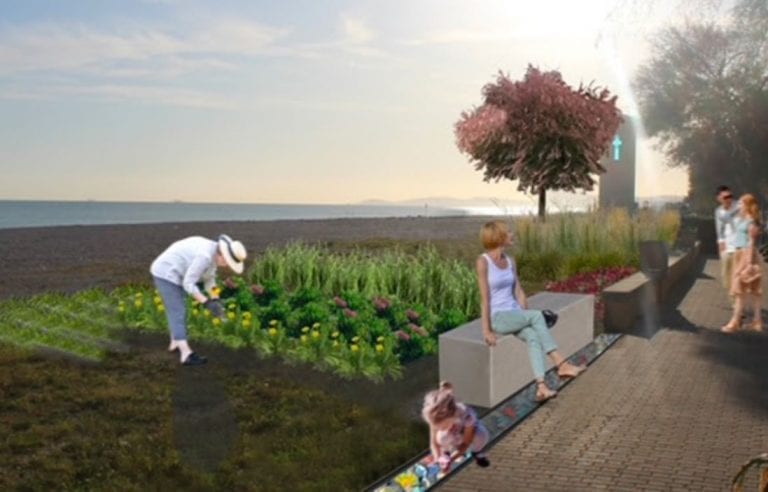 Orto Marittimo is a space planted with aromatic herbs on the Senigallia seafront. It feeds kitchens but also restores beauty to the marine landscape of Marzocca, as it was until the 1960s. Moreno Cedroni's idea takes shape.

Orto Marittimo by Moreno Cedroni. Homage to the past…

At the beginning of last June, we were talking with Moreno Cedroni, who was about to restart the summer season after the painful block of the first lockdown, about prospects for the future. He spoke of adaptability, auspices, and the value of tourism. And new projects. Like l’orto marittimo, a beachside garden whose birth the chef from Senigallia told us about. Located across from La Madonnina del Pescatore, where, up to 50 years ago, “there were dunes and reeds, a habitat that I would like to recreate, to have a vegetable garden in support of the restaurant.” The project, explained Cedroni, had already passed the scrutiny of the municipal administration before the pandemic, which came to paralyze all good intentions. But “dreaming is the first step to making things happen”, the chef begins a few months later in presenting Orto Marittimo located on the Lungomare di Senigallia beachfront. The garden, currently under construction, will be a place devoted to scents, colours and collective memory, conceived after “spending hours, days and years looking at the seafront, which constantly restores beauty,” thinking of my grandmother “who collected in that strip of land adjacent to the sea grugni, sorrel, and mallow.”

Looking at the future. And for the entire community

Orto Marittimo, however, will also be a projection towards the future that Moreno Cedroni imagines for himself, for his team and for the kitchen, as is true for one of the latest projects born for and around the restaurant, the Tunnel experimental laboratory. And for the benefit of the community, since the garden will transform the use of a portion of the waterfront, offering everyone a space equipped to spend time outdoors, looking at the sea and the plants that grow on the edge of the beach. There will be benches, bins, bicycle racks. For this reason, with Davide Groppi, ad hoc lighting was also designed to make the space pleasant at night, too; in combination with an audio system that amplifies the sounds of nature.

Orto Marittimo by Cedroni. Herbs on the sea

All the aromatic herbs used in the kitchen will be grown in the garden, in the varieties most similar to the marine habitat, typical of the Mediterranean scrub, with the idea of enhancing the scent of the sea in the restaurant’s dishes: wild fennel, poppy, oyster grass, chives, grugni, mustard, dandelion, sorrel, nettle, borage, paccasasso, lemon thyme, parsley, sage, rosemary, oregano, marjoram, citronella, lemon balm, savory, mint, juniper, violets, geraniums. The plants planted will be enclosed within geometric flower beds and marked by lines of reeds.

In the project with Cedroni are architects Marco Maria and Fabio Maria Ceccarelli, together with the administration of the Municipality of Senigallia (which covers costs for watering and lighting), because the intent is to regenerate the landscape of the coast as it was until the 1960s, and therefore the initiative takes on a broader scope than the creation of a canonical chef’s vegetable garden (think, for example, of the beautiful vegetable garden overlooking the sea created by Mauro Colagreco, on the French Riviera in Menton, however, reserved only for the use of restaurant guests). “The project was shared by the municipal administration – explains Cedroni to Resto del Carlino – and combines in a virtuous way the interest of the community to qualify the public space with the private one, which in this way improves the quality of reception in the area.

Furthermore, through this landscape qualification inserted harmoniously in the maritime context, a point of public interest will also come about.” Moreover, in Marzocca (the hamlet of Senigallia where the Madonnina del Pescatore is located), an enlightened precedent of maritime urban planning lies in the work of Ubaldo Fiorenzi – an inventor with a degree in agriculture who lived in the first half of the 20th century – who was the first to imagine a future for the locality, purchasing several hectares of land to design an innovative urban plan, which included the development of a series of villas from the sea to the top of the hill, sold at affordable prices (because they were made using the gravel present in abundance on the shoreline mixed with concrete). Thus, what was once a small fishing village was transformed, at the beginning of the 1940s, into the holiday resort it is today.

La Madonnina del Pescatore will not reopen before March, and in any case only when serving dinner will be possible again, “because working for lunch for a restaurant like ours is economically non sustainable.” In the meantime, however, they proceed with creativity and the development of new ideas for the menu. While Orto Marittimo takes shape.