Don’t call them spaghetti bolognese: the difficult relationship between Bologna and its most popular recipe, abroad 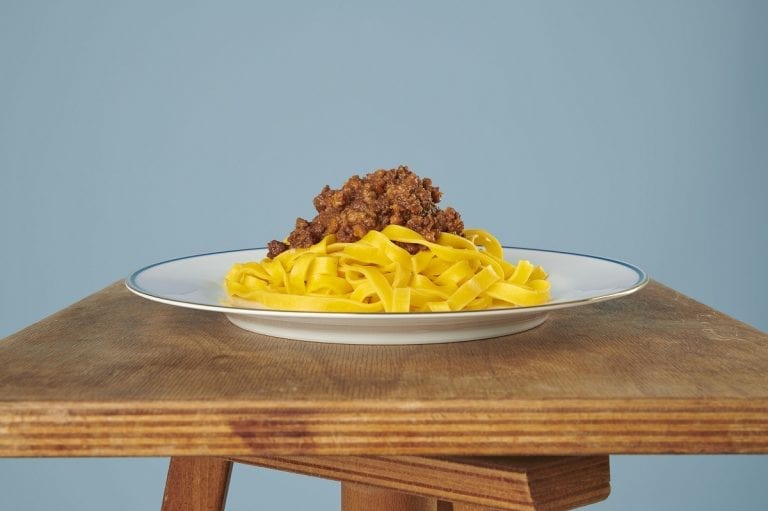 We were at the Marconi airport in Bologna for the presentation of “Don't call them spaghetti bolognese. A Bologna souvenir" to learn more about the bond between the city and its most famous dish abroad.

Bolognese ragù, or rather its most famous ancestor, was born in combination with macaroni, as Pellegrino Artusi tells us in his Science in the kitchen and the art of eating well dated 1891 (we told the story of the sauce here). Although Artusi also mentions it as a possible sauce for green tagliatelle, other authors see the marriage best between ragù and tagliatelle, which in the meantime had become a true and unwavering symbol of the Emilia-Romagna capital. It took less than thirty years of history to make the condiment “alla bolognese” universally famous and, consequently, the city of its birthplace.

And then came spaghetti...

If ragù, in its various versions and recipes, was more or less within the reach of all chefs and housewives of the world, the same could not be said for egg yolk-based tagliatelle. The difficulties inherent in the processing and preservation of fresh egg pasta were relegated to the territories where it was traditionally made, while in the rest of the world fresh egg-rich pasta was replaced by spaghetti, a much more well known and marketed product. In 1923 "Spaghetti Bolognese" are already on the menu of Hotel Commodore in New York, while in 1927 they are included in a cookbook by chef Wiman in a version without tomato, similar (more or less) to the recipe proposed by Pellegrino Artusi. At the same time the dish also spreads to back Italy, but initially considered as military rations or served in restaurants of little pretense outside the Bologna city limits.

The definitive title of global plate took place in the early Sixties when the American company Heinz decided to market canned Spaghetti Bolognese, bringing them into homes worldwide. The success of this specialty, however, took place far from the Emilia-Romagna region and in spite of traditional cuisine fundamentalists. A bit like "Fettuccine Alfredo", which in America became a flag of Italian gastronomy without the echo of it ever coming loudly to Italy, despite their Roman derivation.

Presentation at the Marconi Airport in Bologna

On this misunderstanding played Vecchia Malga restaurant, a historic food and wine company belonging to the Chiari family in Bologna, which presented the preview of the dish “Don't call them spaghetti Bolognese. A Bologna souvenir”, in the presence of the commercial director of the Bologna airport Stefano Gardini and of Councillor of the Municipality of Bologna, Simona Lembi. Hosts were comedian Vito––closely tied to the local cuisine––and chef Massimiliano Poggi, to whom Vecchia Malga asked to create the ragù recipe. The project was born from the desire to raise the quality of the offer and to characterize it with typical dishes of the Bolognese tradition, leaving a souvenir for all, tourists included, who stop a few hours in the city's airport.

The result is a sumptuous Bolognese ragù, perfectly faithful to tradition, very balanced in its aromatic notes given by vegetables of the classic recipe––celery, carrot and onion––and tomato paste, but above all strong in the mix of ground beef and pork meat, enveloping without exceeding in fats. The recipe is secret, but successful thanks to the flavour and solid technical skills of Massimiliano Poggi, a Bolognese chef who needs no introduction: his cuisine is now considered one of the top in the area. His ragù is made with "cuts of meat rich in collagen. We use pork, beef, tomato paste, local red wine, celery, carrot and onion". The ragù, by its very essence, is ductile, continues the chef: "I think of ragù with polenta, with a slice of bread, with fresh egg pasta or regular dried pasta. At my house, the dried pasta was always macaroni, but in some homes, some smuggled spaghetti". For this dish, however, the strictest Bologna rules apply and the ragù is presented on the traditional egg tagliatelle, hand stretched with a rolling pin, cut a little thick, wrinkled, chewy and callous.

Not only at the airport, but also in the rest of the city, it's very difficult to find spaghetti Bolognese and restaurateurs prefer to explain the origins of the traditional combination of tagliatelle and ragù rather than satisfy foreign tourist requests at all costs. At Osteria del Cappello they even designed a t-shirt with the #notspaghettibologese print, worn during service, just to dispel any doubts. As chef Marco Franchini explains, sometimes there's resistance: English and Americans tend to listen more, and the most difficult customers to convince are Russian and Chinese. In recent years, Bologna has attracted an increasing number of tourists and the dining scene has adapted accordingly. Even a careless eye notices the multiplication of places that focus on platters of mixed cold cuts, "taglieri"––the city center has earned the nickname "Taglieristan"––or have changed menus to meet the tastes of visitors with the offer, for example, of tortellini topped with ragù. Obviously there is room for everyone in the great Bologna, but it's nice to know that someone still wants to spend time with customers, telling how and where traditional dishes were born, to taste local specialties without giving in to mass requests, and sending home travellers with a true memory of the city.