Restaurant chefs fight hunger in this summer of solidarity 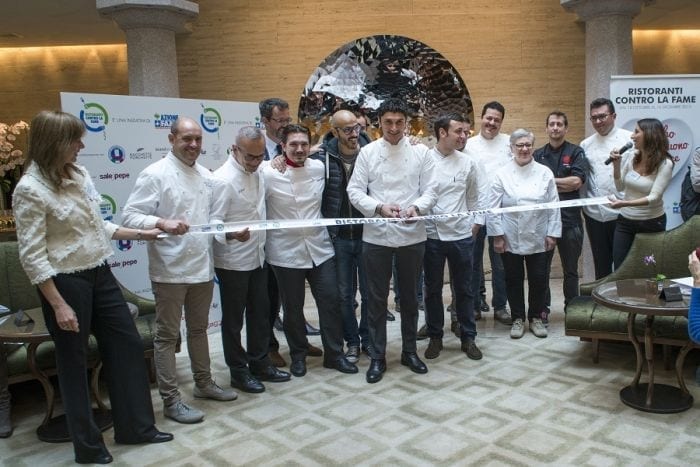 There are currently 30 chefs in the charity’s solidarity campaign in the fight against malnutrition in 47 world countries. Italian culinary celebrities are part of the list of ambassadors in the “Ristoranti contro la fame” project. Here’s how you can support the cause.

Charity can also be supported at the table. Azione contro la famehas chosen to engage Italian restaurants in the Ristoranti contro la fame initiative. This campaign first developed internationally in 2015, gathering accolades from many world famous chefs. Now the project is back on Italian soil for the third summer edition held until September 15th, 2017 with food professionals all employed in the fight against malnutrition afflicting 47 countries worldwide.

The humanitarian association was founded in France in 1979, and has committed for decades to being in the front lines in the fight against world hunger, helping children and families access clean water sources and combating major causes for hunger and malnutrition. The initiative, which was launched simultaneously in Germany, Canada and the U.S., allows everybody to support the cause simply by going to a partnering restaurant and choosing to donate 2 Euro added to their bill. The sum gathered is donated directly to the Association. This ambitious project will also feature Italy in the fall, from October 16th to December 31st, 2017.

Chefs are furthermore ambassadors of the charity campaign, presenting diners with a specially designed menu or dish designed specifically for the cause. Among the 30+ participating chefs are Roberto Conti (Trussardi alla Scala), Tano Simonato (Tano Passami l’Olio), Cristina Bowerman (Glass), Roberto Carcangiu (President of Associazione Professionale Cuochi Italiani), Sal De Riso (pasticceria Sal De Riso), Enrico Crippa (Piazza Duomo), Aurora Mazzucchelli (Marconi), Felice Lo Basso (Felix Lo Basso), Giuseppe Romano (Olimpus), Claudio Sadler (Sadler), Andrea Ribaldone (I due Buoi), Elio Sironi (Ceresio 7). Each of them will present a signature dish representative of the joint humanitarian efforts. Many other restaurants have joined the cause, both famous and lesser known, ranging from northern to southern Italy, large sprawling cities to small remote villages. This year’s newest addition is the opening of participation to master pizza chefs who will donate an added 0,50 euro to each pizza margherita pie. In this way every client will have a chance to donate.