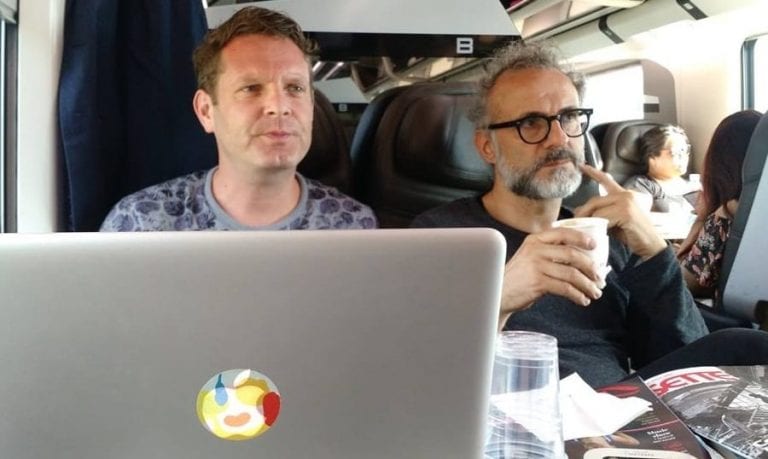 The experience of Refettorio Ambrosiano during Expo initiated a greater effort: rounding up cooks fighting against malnutrition and waste. During the Olympics this will be a new soup kitchen. Goals: 19K meals and 12 tonnes of reused leftovers.

It’s read “RefettoRìo”, accent on the "i". To understant the origin of this project it’s sufficient to look at another famlous soup kitchen, the “Teatro della Vita” which Massimo Bottura and the chefs that adhered to the idea put together for Expo 2015. The project Refettorio Ambrosiano came to life answering a simple question: “What can I do for others?”. The world famous chef of Osteria Francescana asks himself the same question, two years later.

At the crowd gathered at FAO for the press conference in Rome, he introduced himself as he always does: “My name is Massimo Bottura. I’m a cook”. He tells of his initial dreams in the kitchen, the beginnings in Modena in 1995, and proceeded to illustrate the project to the press and institution officilas gathered on a hot Rome morning, just a few days prior to the opening ceremony of the Rio Olympic Games. With him are Director of Fao Josè Graziano da Silva, minister Maurizio Martina, the President of Coni Giovanni Malagò and David Hertz, the founding chef of Gastromotiva, collaborating with Massimo Bottura and NGO Food for Soul for the building of the project.

On its end, Fao “commits to bring together chefs for the fight against hunger” - which also means promoting sustainable agriculture and educating the public to healthy eating in the name of the fight against malnutrition and obesity - and the cooks are ready to take the challenge. “Cooks feed people every day, it’s natural” says René Redzepi in the video that sums up the Expo in MIlan project, “technique cannot be at the service of ego, our dishes don’t need to stand out for mere esthetic value, rather for a deeper ethical meaning”. Bottura, who will be taking the experience baggage aquired in Milan to Brasil, in one of Rio’s favelas, intends to combine ethics and esthetics, so as to “have beauty and goodwill strengthen the bond of dialogue and relations, just like at the table”.

The Rio leftover soup kitchen for the Olympics

Bottura stresses the importance of fighting against waste, like he did in the Milan Refettorio, involving 65 chefs “obliged” to rethink leftovers and transforming them in food for others. Among the most prominent names are Virgilio Martinez, Gaston Acurio, Ferran and Albert Adrià, among others. Bottura is ready to concieve a new culinary tradition, since, as he loves to say “cooking is a call to action” and “chefs are more than the sum of their recipes”.

David Hertz illustrates what that “action” will be during the Rio Olympics. With his Gastromotiva he has been working in the less affluent areas of Brasil for the past 10 years (and now in Mexico too). Every day he learns something from the people he works with: “We all need to take responsibility into our hands. We have to transform into channels of good intention-giving towards social outcasts”. He met Massimo last year, and that’s when they began to elaborate the idea: “At the beginning we had few sponsors interested in investing in the project, then something happened. The constant effort brought us to what will be public in a few days”.

That is the kitchen of RefettoRio Gastromotiva which will be ready to feed 108 persons in each sitting. At the end of the Olympic Games the estimate is 19K meals and recouperating 12 tonnes of waste. In the kitchen there will be Brasilian chefs and rookies trained in the field with Gastromotiva’s work. According to David, these are all special people “like the Kenyan baker who will join us in Rio”. Brasilian artist Vik Muniza lso is involved “he used leftovers to create a 6-meter piece, an extraordinary work of art” reports one excited Bottura. Design of the space has been curated by the Campana brothers.

“We are after all going to Rio proud of representing a certain style and responsibility” echoes Maurizio Martina “Because the experience at Refettorio Ambrosiano is a cultural heritage Italy is obliged to take this model worldwide in the future, and be coherent with the 2030 agenda”. From theory to practice, then “tying this experience to a citizenship dimension which involves others beyond the food and agriculture world, investing on food, cultural and social education”. Massimo Bottura closes, “We need more kitchen like these to replenish the soul”.