Ramen ya Luca in Turin. The secret is in the broth 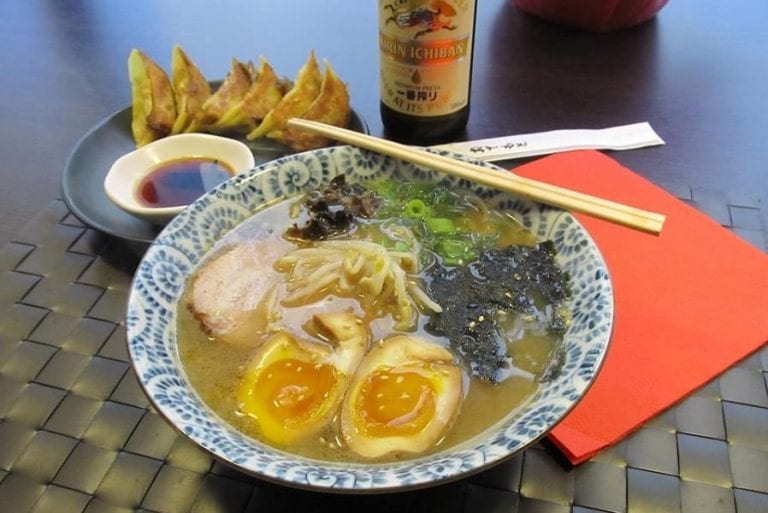 Puglia-born and Turin-adopted Gianluca Zambotto's dream becomes reality two years ago, after training in L.A. kitchens and several trips to Japan. Today, Gianluca is the the only chef offering the most authentic ramen ya tradition in Turin. Respectfully, creatively and with lots of manual skills.

Ramen made by an Italian

Maurizio Di Stefano in Rome, Luca Catalfamo in Milan. And now Gianluca Zambotto in Turin. There’s an added strictly Italian element in the ever-growing development of quality ramen bar culture in the major cities in Italy. Interest in this his highly variegated Japanese tradition (much more so than the often mediocre sushi kaiten) is however still moving rather slowly compared to how it’s doing in other Western countries. The unusual across-the-board geography of "Italian" ramen has many stories to tell. Consider for example how in Florence Koto Ramen’s success exploded in only a few months thanks to its Asian-Italian teamwork. The starting point is one that's shared universally: great passion in regards to Japanese culture tout court, which develops from manga art and is extended in the kitchen, amid homemade noodles, artisan dexterity and manual skills.

Gianluca Zambotto’s career for example, meets the professional kitchen universe almost by chance, and only after dedicating large part of his studies to scientific disciplines. He gets a degree in physics and soon after goes on a sabbatical year abroad, during which he travels the world and basks in the luxury of discovering things he had only seen though other people’s eyes in his culturally and geographically distant birthplace, Taranto.

From Turin to Los Angeles

Even if a Turin resident for the past two years, Gianluca's accent betrays his Puglia roots, but don't let that fool you. When he decided to change paths, the young chef/entrepreneur that nowadays caters to those seeking an exotic offer in the small via San Domenico locale was never afraid of becoming a citizen of the world. After a few trips to Japan as a tourist, “during which I visited many places, even the ones far removed from the classic itineraries. I was in search of the most authentic traditions, including the ones in the kitchen, the rituals of small communities as well as the frenzy of the larger cities”, Gianluca lands in California. Here he begins training in Japanese cookery. No joke. But why California? This is where Gianluca confronts his interest in regards to the Land of the Rising Sun, struck by the vivacity of the Japanese community there, finding it one the of the most dynamic and authentic outside of the country's confines.

Little Tokyo and the Japanese-American community

Popularity of the community in the US, including in the kitchen – ever heard of nikkei cuisine? – is due to the influx of Japanese migrants on the coast of Peru at the beginning of the 1900s. But maybe not everyone is familiar with the fact that for over a century California entertains privileged relations with Japan. Just think that Little Tokyo – dominant Japanese district in Los Angeles – houses the biggest Japanese-American community in North America. Many of its residents, in the beginning of the 20th century, gave origin to a flourishing produce commerce. Nowadays, the area offers an interesting point of view on the cultural hybrid that has maintained intact different peculiarities of the Japanese identity, crossbreeding them with local flavors. Specialized restaurants are many and diversified. Many dishes have been adapted to local palates over the years – giving origin to a unique Japanese cuisine declension. Think California rolls that now populate most sushi bars worldwide, they were born in Little Tokyo in the ‘70s to make the sushi roll more appetizing to the American public. In the city, like in other California destinations, the variety of quality Japanese food is incredibly large: from specialized kitchens producing noodles and yakiniku, to ramen bars. And this is how the spark catches fire.

The ramen-ya of the Quadrilatero district

Japan and its cuisine become for Gianluca a topic of study and an investment for the future. Gianluca starts frequenting a Japanese master who teaches him how to gracefully move among the secrets of an ancient gastronomic tradition. Back in Italy, Gianluca studies the format that seems the fittest and finds it in the ramen bar: an unexplored niche in the Turin dining scene. This is the beginning of May 2014, after a few months' prep and trial runs, Ramen-ya Luca opens its doors. From its inception, the idea is to present Turin citizens with the most authentic offer possible, yet with a modern and personal slant and the necessary adaptation to local palates: “There is no unambiguous recipe for ramen in Japan either, its numerous variables stem from a constant elaboration which draws from each Japanese region’s characteristic flavors, preferences and ingredients”. This means space for experimenting – indispensable prerogative for all the Italian ramen men asked thus far – few dishes, but all top-notch as far as quality and execution: “Clearly much depends from ingredient availability, we try to respect the original aromas and flavors, working with creativity”. All is furthermore crafted and cooked in the via San Domenico open kitchen, noodles included. 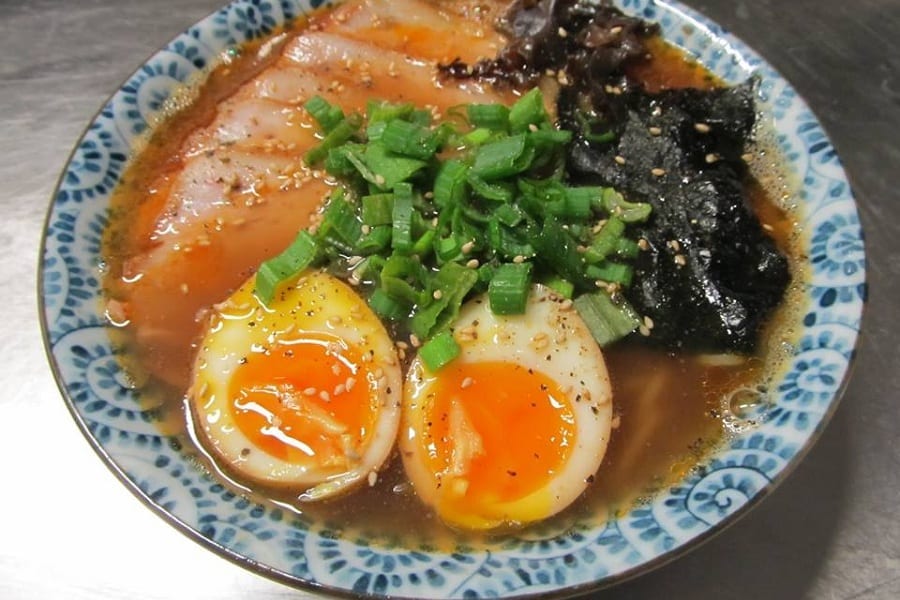 In 2014 Gianluca began offering three dishes, and this is what made him popular, with kudos from the Japanese Suzuki engineers on a business trip to Turin: “You could sell your shoyu (ramen with soy sauce, Editor’s Note) even in Tokyo”, they'd often tell him as they took their seats in the 23-seat private room reserved for patrons seeking home flavors thousands of miles from home. Two years after the grand opening, the ramen on the chalkboard have increased to six and they change according to ingredient seasonality and pairings: “Our shoyu is very delicate and particularly loved. But what I most proud of is the vegetarian offer: I add soy milk to the vegetable broth. Very few do the same in Italy. The result is a very rich and tasty soup, added with nori seaweed, egg, spinach, soy sprouts, black mushrooms and sesame seeds. It’s very popular”. Gianluca is open about it, the secret to good ramen is mostly in the broth, “you must know how to make it, dose the quantities, find the correct combination and proportion of meats used”. There’s plenty of alternatives too: on the menu there is also classic miso ramen, spicy sesame tantanmen, chasu ramen with barbecued pancetta, aromatized shio and sautéed noodles (yakisoba). In addition to the ubiquitous homemade gyoza starters is the tasty Chashu rice, which many “greatly appreciate”, this is toasted rice added with pancetta and the house sauce. There’s other treats, like marinated fried chicken (tori karage) and edamame to nibble on while waiting for your steaming bowl of ramen, “to snack on as soon as you’re seated at your table”. 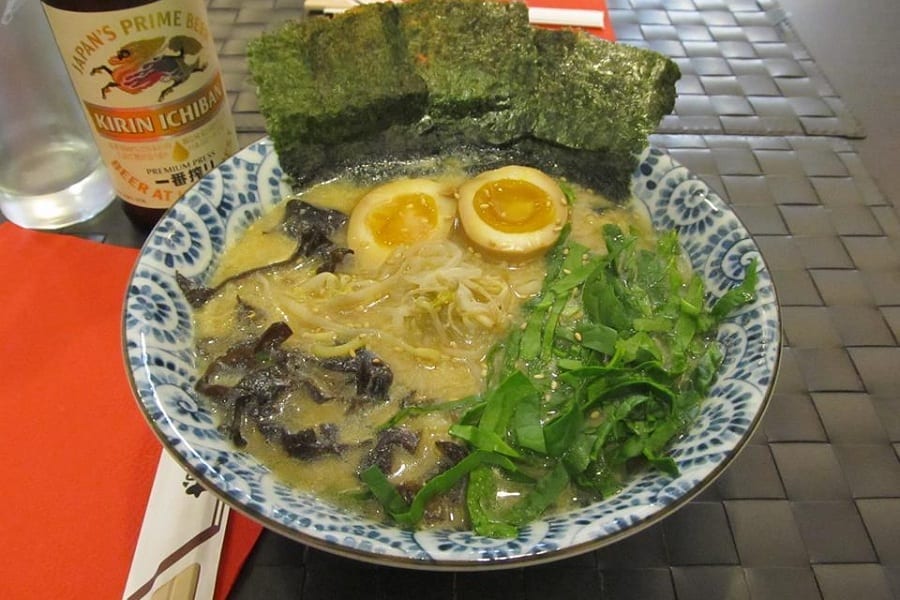 Of course Turin is not Milan, but Gianluca’s ramen ya in the heart of the city’s Quadrilatero does very well, and is one of the few hyper-specialized Japanese cuisine restaurants in the city. The outlook is abroad, “in Italy I have not had the chance to try other places, because I’m always working in my kitchen”. Yet in Barcelona he found a place he feels comfortable recommending: “It’s called Hiro, a ramen ya in the most traditional sense, in the kitchen is a very talented Japanese chef”. Before reserving a flight to Cataluña, our suggestion is scouting out the low-key entrance at ramen ya Luca first, in the orderly grid of Turin's Quadrilatero. Crossing the threshold under the stylized bowl at the entrance, you will find yourself in a safe haven where all your ramen-related curiosity will be satisfied. 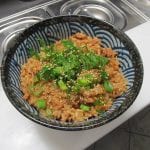 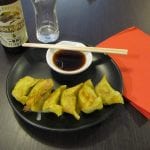 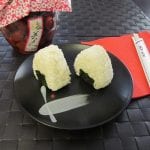 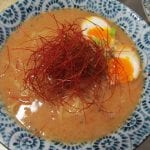