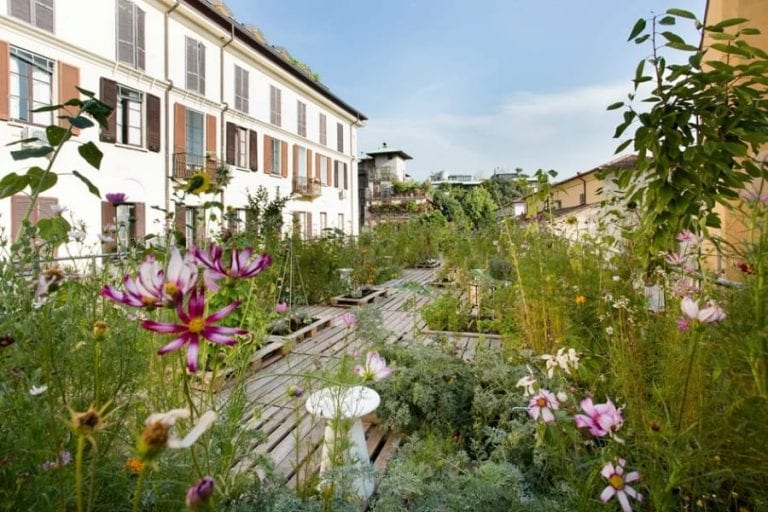 Urban farming is on the rise in Italy. Rooftop vegetable gardens are the latest rage, born from the minds of a team of resourceful Milan architects.

Urban farming in Italy and abroad

Rooftops are outposts that allow views of the ever-changing urban transformations and admire the historical tissue of the city. Rooftops represent a special place, a spot for enjoying company of friends or somewhere perfect for liberating creativity. The latest rage belongs to a group of Milan native architects and engineers, who have created a vegetable garden on a rooftop, inspired by the international urban farming movement, which has taken the world – and now Italy – by storm.

The high elevation version is the first of its kind, but definitely not the first vegetable garden in town. There are in fact an estimated 18 million urban gardens currently blooming in Italy. The trend is growing, and if fostered with commitment could one day save abandoned green areas and educate citizens on environmental issues. Precisely to incentivize your entrepreneurs, the enterprise Città d'Orti this past February proposed to spread the domestic vegetable patch model on a vast scale thanks to a roving school. Additionally, in March 2017, the Città del Vino launched Urban Food Planning, a system devised to redesign cities and agricultural areas. These initiatives base their actions on other solid model abroad, like GrowTo Urban Agriculture Action Plan in Toronto. The action plan aims to gather urban farming stakeholders of the city to pinpoint opportunities of socio-economic development and political solutions for the growth of this sector. There’s also Food Policy Councilborn in Bristol in 2011 and created to highlight the strongpoints and vulnerability of the urban food system, with political suggestions for further action.

Housing the project is the rooftop of a studio on via Palermo, in the heart of the Brera district, located above the offices of Piuarch, born in 1996 thanks to Francesco Fresa, Germán Fuenmayor, Gino Garbellini and Monica Tricario, with the objective of 360-degree architecture, from apartment complexes to repurposing of abandoned areas. In 2013 the group was recipient of the “Architetto Italiano dell'anno” Italian Architect of the Year award in addition to two gold medals in the Honourable Mention at Triennale di Milano. The studio is well known in the Milan architecture scene. It now counts 40 among architects and engineers and it aims to increase its efforts in regards to urban farming.

So now, above the offices is an open air vegetable garden that uses a modular pallet system to create paths and openings through which visitors can relax in the sun, or stroll among rows of planted crops. In addition to the produce are also flowers and aromatic herbs, which help to create a more precious attraction, a meeting place for all ages. Curating the landscaping is Cornelius Gavril in collaboration with organic farming company Verde Vivo. The garden focuses once again on local, short and certified supply chain, but also on teaching. Kids can attend workshops and classes to learn how to tend to plants, and getting their hands dirty in order to see how their food grows in the soil.