In the world of cookies and biscuits – a varied scenario of traditional recipes that often draw from historical events – today we land in Piemonte. Bonus recipe by maestro Walter Gallizioli.

Exploring Italian cookies and biscotti of Piemonte, through 12 varieties and a recipe by maestro Walter Gallizioli of Pasticceria Gallizioli in San Mauro Torinese.

These cookies are a typical product of Sandigliano, in the Biella province. Acsenti are made with cornmeal added with regular wheat flour, sugar and alvà, the local name for natural starter yeast. Once kneaded together, the dough is portioned and formed into S-shaped or round cookies. Originally Acsenti were holiday cookies tied to the feast of the Madonna delle Grazie, celebrated in the second half of September, when they were added with some butter too. In time they also doubled as breakfast cookies, many locals dunk them in morning caffellatte or tea.

Amaretti can be found all over Italy and abroad, but they are tightly bound to an area straddling the Savona district and southern Piemonte – an area known for its many types of amaretto biscuits, including dry and chewy kinds, light and crumbly, as well as the more compact type. The key ingredients are sweet and bitter almonds, egg white and sugar, with the occasional addition of armelline, or ground apricot pits, which lend a more assertively bitter note. In Piemonte there are several kinds, among the most popular are the amaretto from Mombaruzzo, from Valenza, from Gavi, fromi Acqui Terme and from Ovada.

The habit of matching dark chocolate with Langhe hazelnuts dates back to the beginning of the 1800s, when an unidentified pastry chef returned to his home town ­– Cherasco near Cuneo – where he refined these irregularly shaped, crunchy cookies. They are made with dark chocolate, toasted hazelnuts (usually of the Tonda gentile delle Langhe variety) and cacao butter blended together to obtain a soft mix. The blend is then divided and shaped in small portions. The original recipe is a secret, jealously hidden in the kitchens of local pastry chefs in Cherasco. 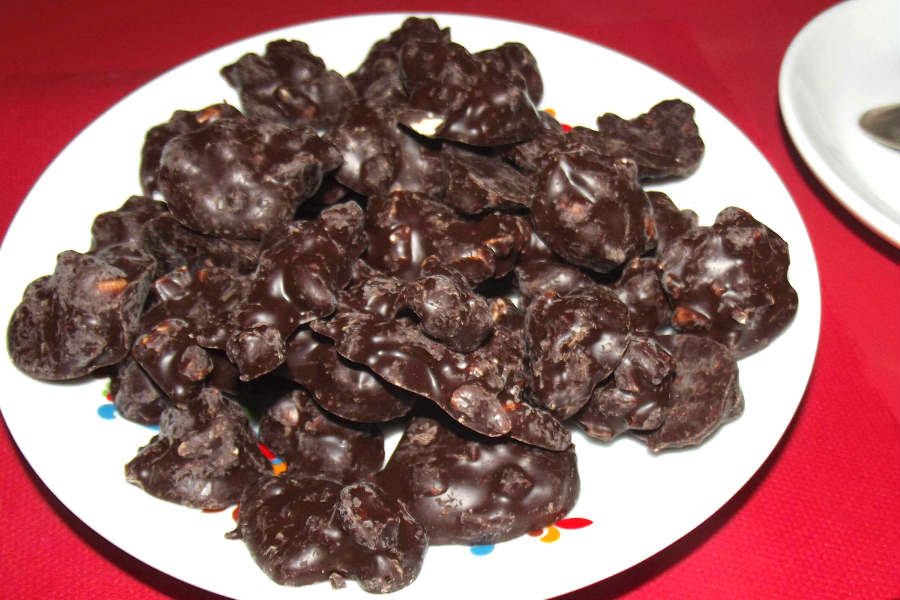 The origin of Baci di dama is uncertain: sources connect it to the town of Tortona, others link these biscuits to a Savoy court around the year 1800. Whatever the true origin, the romantically named cookies are among the region’s most famous sweets. They’re made with flour, hazelnuts, sugar, dark chocolate and butter.

Varieties of this recipe abound, the most famous is the one made in Alassio, copyrighted in 1919 by Pasquale Balzola. In addition to the classic ingredients, this version s added with cacao powder and honey.

The name of this Renaissance is inspired by a famous Vercelli Carnevale character. Developed by Carlo Provinciale, the original recipe was passed on to Vittorio Rosso by Margherita Flecchia, Provinciale’s great-grand daughter in the middle of the 1900s. The heirs continue to keep the recipe secret. This cookie was so popular that in 1903 it was proclaimed by the Savoy royal house as “unique traditional cultural food heritage of Piemonte”. Bicciolani are made with flour, butter, sugar, eggs and a spice mix containing cloves, cinnamon, cardamom, coriander, white and black pepper. Every baker in Vercelli makes a personal variation of the original in the spice ratio. This biscuit was born following the Unification of Italy in the year 1870, when baker Domenico Rossi decided to experiment using a brand new product. The “official” date of birth of krumiri biscuits coincides with the death of Italy’s first King, Victor Emanuel II, in 1878. Legend has it the shape of this popular cookie comes from the shape of the King’s royal moustache. The name, on the other hand draws from the word “crumiro”, a strikebreaker – which draws its origin from the Tunisian tribe of the Khumir made famous from the “Tunis slap” incident of 1881.

The original recipe employs “0” flour (sometimes mixed with cornmeal), butter, sugar, egg yolks and fresh vanilla. The signature-ribbed surface is obtained with a special pastry pocket tip, or, in the case of larger productions, extruded through a die. As the name implies, the shape of these biscuits resembles a cat’s tongue. This cookie is widespread throughout Italy and select European countries. In Piemonte the recipe suggests this is where the biscuit was officially adopted. Born in Paris in the Roaring Twenties by a fan of Charles Perrault, the author of the Puss in Boots fairy-tale (hence the name) the cookies reach Italy thanks to the connections of the Savoy family with French noble families. They are made with flour, softened buttercream, egg yolks and sugar. Contrarily to Parisian cat’s tongues, in Piemonte they do not contain chocolate.

Typical of the small town of Stresa in the Verbano-Cusio-Ossola province, these cookies were born in 1857 by Pietro Antonio Bolongaro in his family’s bakery. They became instantly successful among Piemonte nobility. Their name draws from Princess Margherita – one of Italy’s most famous queens – to whom the biscuits had been baked for her First Communion. Margherita was so impressed for the biscuits’ delicate flavour, that once on the Italian throne, she demanded they become the official sweets served at the annual Ferragosto Royal House gala. They are made with 00 flour, starch, butter, boiled egg yolk, sugar, vanilla and lemon zest.

The name of these cookies was originally noisette, French for ‘hazelnuts’, also noasèt, in Piemontese dialect. They became nocciolini during the Fascist era, when foreign names were all Italianized. Nocciolini were invented in Chivasso by Giovanni Podio, and owe their success to the work of Ernesto Nazzaro, son-in-law of Podio, who showcased them at the Universal Expo in Paris in 1900. The cookies obtained such rave reviews that in 1904 Nazzaro was granted patent and registered trademark for the shape and recipe by the Italian Kingdom Ministry of Commerce. The success of nocciolini was furthermore expanded when Victor Emanuel III of Savoia made Nazzaro Royal House supplier.

The recipe is simple: hazelnuts, egg whites and sugar. The nuts, of the Tonda gentile delle Langhe variety, are peeled and roasted, then ground, mixed with sugar and egg white, and then portioned by dropping blobs of dough on a cookie sheet and baked in the oven. Traditional nocciolini are very small, about the size of a fingernail, recently a larger 3-4 cm version is being marketed as “noccioloni”. 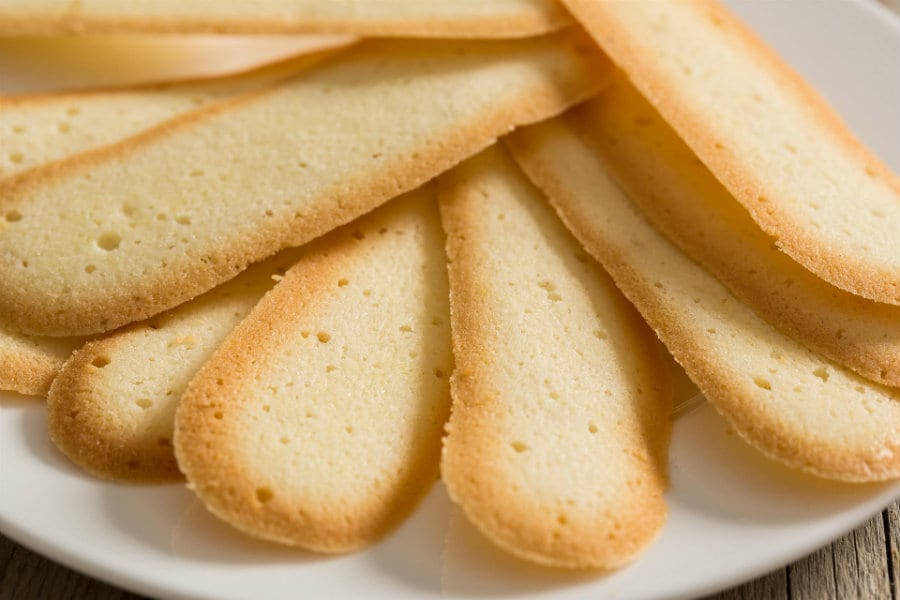 Traditionally Paste di Meliga, paste ‘d melia in Piemonte dialect, were born as a consequence of a low yield wheat harvest resulting in skyrocketing prices. Bakers started therefore mixing all-purpose flour with corn flour (not good for polenta, but merely used for baking). In addition to corn flour and cornmeal, the recipe includes butter, sugar, honey, eggs and lemon zest. The fine grain of the dry elements lends a crumbly product and a well-defined flavour. These cookies are particular to the area surrounding Cuneo, in particular in the Monregalese, but are equally found in the province of Biella and in the Val di Susa, Val Cenischia and Val Chisone valleys near Turin. Not to be mistaken with the paste di meliga of Sant’Ambrogio, or the paste di Pamparato and those hailing from Barge and Sanfront.

Quaquare get their name from the dialect term locals use for ladybugs. They’re made with flour, butter, egg white, sugar and lemon zest. Made in a number of bakeries in Genola, in the province of Cuneo, these cookies are mostly made at home for the feats of S. Marziano and baked in a communal oven. Every family obviously has a secret recipe. Cookies made for the religious holiday are stored in sealed jars called burnie that maintain the biscuits fresh for the entire year. 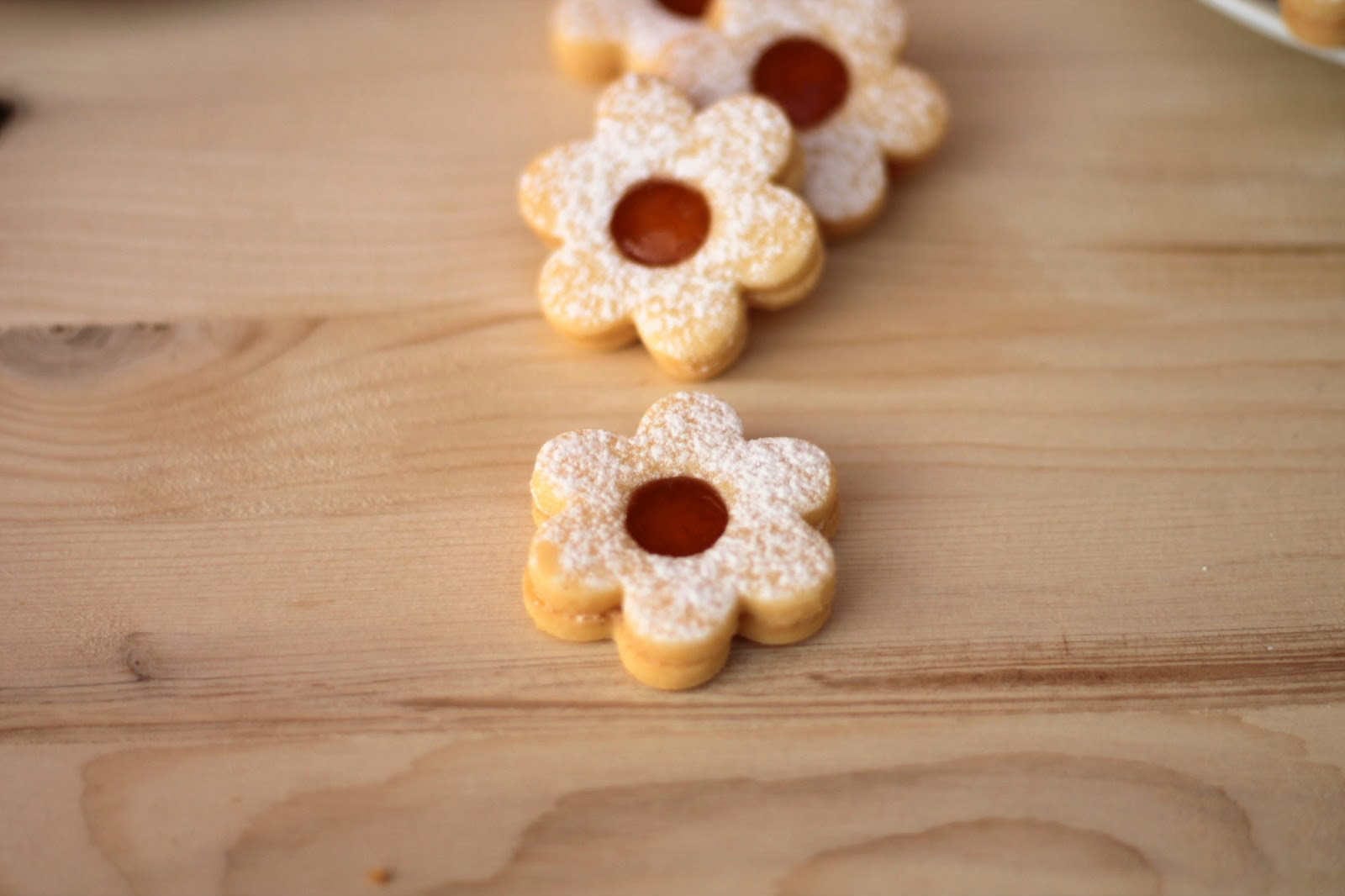 Typical of Isola d’Asti, these cookies owe their name to the movement necessary to make them. When the dough is ready, the dough is stretched into their typical shape. Made with flour, sugar, milk, butter, hazelnuts, lemon zest and yeast. They are crumbly and a purposely-grooved surface, large size and the flavour is sweet with bitter notes. Locals eat them with milk, but also paired to sweet dessert wine.

Method:
Sift the flour and potato starch. Put the butter in the stand mixer with the ground almonds, ground hazelnuts and the sugar. Sift in the flour and starch and start at slow cycle for 1 minute. You can also knead by hand, as long as the dough does not warm up too much.

Divide the dough in 2 parts: one 1 kg and the other approximately 1,2 kg.

Add the cacao powder to the 1kg part of the dough, knead well and shape into a sausage. Chill in the fridge for 12 hours.

Form a sausage with the remaining dough and chill that too for 12 hours.

Once this time has elapsed, cut the dough and roll into 2cm buttons. Bake these 12 minutes at 170 degrees Celsius. Allow to cool.

To make the ganache start by finely chopping the chocolate. Pour the heavy cream in a saucepan and heat it (stay under 85 degrees C). Pour the chopped chocolate in the heated cream and remove from the stove. Whisk to melt the chocolate completely. Smear the ganache on the bottom of each baked button and pair them to forms “sandwiches”. 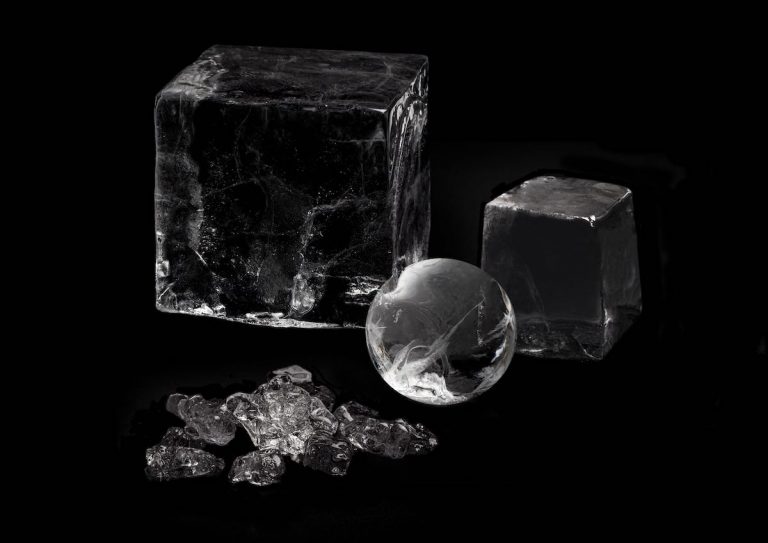