Niko Romito. The art of simplicity 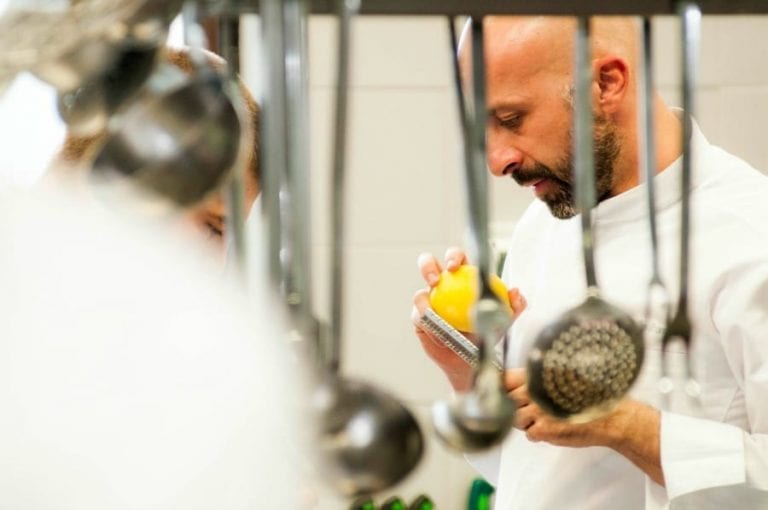 Can a cucina that is apparently extremely linear provide the palate with emotions so strong they are unforgettable? Yes, if the talent of the cook manages to handle each ingredient in such a way that it becomes the absolute star of the dish. The Italian-style challenge of Niko Romito.

It is painful to speak about Abruzzo, a region overwhelmed by a series of catastrophic natural events. And it’s even more difficult to speak of it in enthusiastic terms connected to the pleasures of the table. An interview with Niko Romito, though, lets us feel vital, lively hope. His words, his reflections, even in terms of dishes and experiments in the kitchen, have an energy that helps us forget avalanches and earthquakes. “In one year”, the Abruzzese chef explained, “at least five young people who emerged from our Casadonna school have opened their own places after having some experience in the field: in Pescara and Atri, in Roccaraso, Rivisondoli, and Teramo. I think it’s a very positive sign. Graduates with fresh enthusiasm trust, invest, and are turning around the mood that was taking hold in Abruzzo. Chefs don’t have to leave in order to cook. They don’t have to emigrate. They can invest here and they do, bringing many people into our region. Abruzzo is becoming a place worth visiting in order to get to know its fascinating landscapes, to experience flavors that are new and ancient at the same time. It’s no accident that despite the crises and tragedies of recent months, it’s wine, agriculture and restaurants that are giving hopeful signs of recovery, perhaps the only ones at the moment”.

The role of territory

One of the leaders in this renaissance is surely the school that Niko set up in Castel di Sangro, alongside his sister Cristiana, with whom he has worked since the start. The old Reale of Rivisondoli has become Spazio, a kitchen more tied to tradition and more immediate, where the students can take their first professional steps. It already has two other sites, in Roma and in Milano. But Casadonna is not only a professional cooking school. It embodies the territory, working with traditions and prospects of cucina italiana based on what distinguishes it from all others – the extreme richness and variety of ingredients. “I don’t like to see that many young Italians who come out of hotel schools are focused on cuisine that isn’t Italian. I’m thinking of northern Europe or Spain. And they don’t see the wealth of possibilities they would have concentrating on our own production and tradition”. This comment is from a chef who had made a career of provocation, of turning the perception of traditional ingredients upside down. His artichoke in 2013 seemed like a dare, as did his chicken tortelli served simply on a plate, with no sauce.

“Because I cook focused on ingredients, tradition is my main source of inspiration”, said Niko, “my basic emotion. My cabbage dish comes from the classic cabbage and potato of the Abruzzo. The artichoke the same. It is almost an artichoke alla romana. The chicken tortelli begin with time-tested chicken alla cacciatora. Certainly, I continue to do research, to lighten, to concentrate, to find clean flavors. Think about stews. My tortello starts with the juices from chicken alla cacciatora. French cuisine, instead, focuses on sauces, on reduced broth. The sauce is a specific part of the dish in its birth, in its becoming”.

The sense of simplicity

Seen from the concrete observation of his dishes, Niko’s kitchen expresses a sense of extreme simplicity. It seems almost bare, where removing is more a concern than pairing, adding. But in the mouth, that idea changes completely. The monumental centrality of the ingredient – and more and more of them are vegetables – speaks a language that was unknown up to now. His dishes are as minimalist as they are complex and deep on the palate. They are also of an absolute lightness, with very few added fats, sometimes none. Little salt or sugar is ever added. More and more, ingredients are presented raw, cold, in order to maintain, as much as possible, their nutritional and sensual qualities. “Even if this isn’t the principal motivation of my research”, Niko explained, “my aim, which has become my passion and my deepest interest, is the study of the ingredient, to give each its maximum expression and centrality. Certainly, one of the results is the healthiness of the dish. Another result is that my cooking doesn’t only please critics, gastronomes, passionate food lovers and trained palates. It also pleases neophytes, those who haven’t had important culinary experiences. They aren’t intimidated by my plates because they recognize them, understand what they’re about, both visually and in terms of flavor. The artichoke is an artichoke. Cabbage is cabbage”.

Remove, lighten, focus, subtract: these were the principles explained in the book Ten Cooking Lessons written by Niko with Laura Lazzaroni. If the starring ingredient is absolutely recognizable, it is also true that the complexity in Niko’s preparations almost has the force and depth of the great abstract canvases of the twentieth century, in which tone on tone amplified the possibilities of color. The work doesn’t only consist in removing, but in removing the ‘wrong’ things. “Perhaps”, Niko pondered, “I add in order to obtain the result of subtraction. It is a point of arrival after a very complex path. Certainly, I don’t like dishes that are too complicated. I’m for simple things. If I eat cabbage, I want cabbage at its purest. I was already working on extraction by 2000. Then on concentrations, and later on layering, ingredient on ingredient to accentuate flavor. My artichoke, which was born in 2013, wasn’t a provocation. It was simply a successful dish. Here the form in which it is presented changes, the form we have always known. The first step was the absolute onion, then came the artichoke, then the eggplant, and finally the cabbage. The absolute was pure extraction of the ingredient. With the artichoke, the extract was concentrated and became a sort of artichoke paint that lacquered, seasoned, was brushed on at the start. You always begin with extraction, while the structure remains that of the classic artichoke. With eggplant, instead, the form and structure change. It becomes a cube and its consistency becomes more important. Cabbage is the final synthesis of all this work. It concentrates, it layers, it changes structure, it is eaten with a knife and fork. And, we introduce fermentation, which adds complexity. In this way, you recognize that it’s cabbage immediately – one of the most common vegetables. Tradition and poverty become the absolute stars of the dish. I have always worked with ingredients that everyone knows. I have never tried strange pairings. My cucina is very Italian, very much ours”.

From Marchesi to Romito

In Italy, it was Gualtiero Marchesi in the 1980s who first spoke about ‘subtraction’ and absolute focus on the ingredient. His book, “My New Cucina Italiana” was a landmark. We asked how self-taught Niko, whose journey to the peak of Italian restaurateur careers started with an exam he missed, felt about that kind of approach. “I never spent time with Marchesi himself, although I have thoroughly studied his dishes, his books, his ideas. But I’m not a follower. Some of his dishes have exceptional modernity and relevance. For example, his cold spaghetti with caviar: it is explosive and intensely modern. My simplicity always starts with the ingredients, which have to be of the highest quality, but I use new and different techniques and technology. And for me, the vegetable is more and more important. It becomes more and more the center of interest. Working on the concept of simplicity means respecting the production process much more. The ingredient that a producer brings you, after having worked on it for years, gives the cook another responsibility. Those ingredients have to be studied, understood and respected, not turned upside down. You can’t mess with the life work of a person who has put his soul into producing it”.