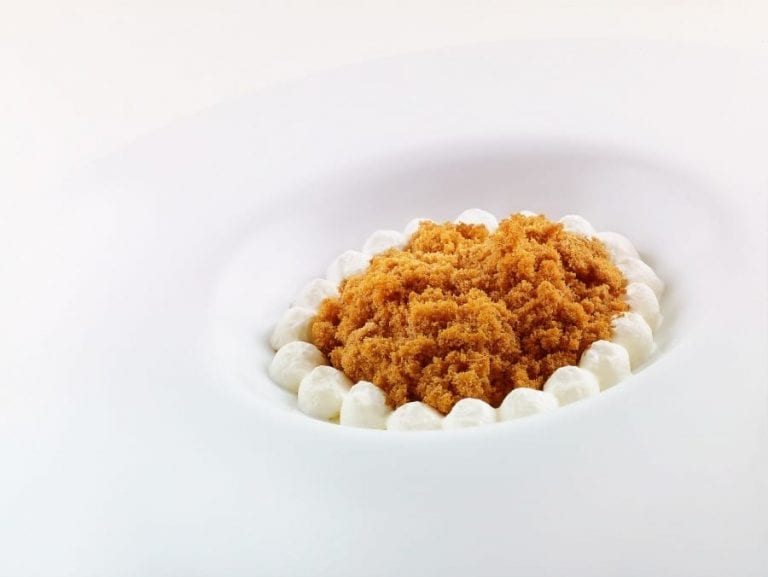 The work doesn’t only consist in removing, but in removing the ‘wrong’ things. In his book, “Ten Cooking Lessons”, Niko Romito explains the principles of his cuisine. Here are five of his recipes.

“Everything here revolves around pancetta. Even from the photograph you can see the meat isn’t browned, the opposite of what we’re used to seeing in many dishes in which it is featured. This is cooked in a pressure steam oven. Above all, I start with exceptional meat, handling it without the Maillard reaction or any treatment. Either the ingredient is perfect and great, or it’s better not to use it. I didn’t want a crust or external toasting. The hardest part, mentally as well, was handling the fat. Cooking at controlled pressure turned out to be perfect. The fat – very clean – keeps an important consistency and doesn’t dirty the palate. The pancetta, before it’s served, is passed through a mixture of gin, honey and lemon. You don’t feel that in the mouth, but it moves the flavor of the meat upwards. These are the invisible ingredients. They aren’t felt, or seen, but they bring out the flavor to its maximum. I liked that dish very much, but I needed to finish it with another element, and I wanted to work with another cube shape. I was already working on parsley and vegetables, so my thoughts immediately went to celery root. It has almost the same consistency as pancetta, and the shape on the plate is similar, but they don’t unite. They march together and express themselves well, in harmony, their differences and particularities. The celery root is cooked in a pressure cooker with wine, white vinegar and water. It rests for two or three days and then is cut into sections. As far as form and consistency goes, it is another version of my earlier work on eggplant and on tongue.”

“This is the most recent entry into the vegetable section, one of the results of the work done on other great dishes, from artichokes to eggplant. I like to handle common, recognizable ingredients. Potatoes and cabbage are ingredients with identity – very territorial and very Abruzzese. I wanted to think of cabbage as a star player, with a form and dignity different from the way we are used to seeing it. Working on this cruciferous vegetable, taking it apart, cooking it, re-cooking it, I got results. Moving to steam I began to have a structure and a crunch that was raw. The idea was not to take it apart, but cut it in slices like a cake. During that period, I was in Seoul, and kimchi is a kind of national dish. It is a fermented cabbage that made me very curious. It has a more complex and deeper flavor that we are used to finding in cabbage. So I began a series of trials with fermentation. I realized that the more the cabbage aged, the more it gained in complexity, acidity, sweetness and freshness. The more the fermentation went ahead, the more interesting it became. Then, with the outside of the vegetable, I made a puree. Cabbage puree on steamed cabbage, in layers. I needed elegance. I tried with various spices but I decided on anise, which went very well with it. So I made a distillation of star anise in alcohol and added it to an emulsion of cabbage. Again, I was looking for creaminess, so I made a sauce with a very light potato puree, water and oil. When I bring this plate to the table, it seems almost like a veal roast. It is a new form for a vegetable that has always been overcooked or drowned in overcooked soups. Besides, it is a dish that is strongly territorial and ties in well with my work, while going outside the canons of what’s usually done with this ingredient. Today, the aging of steam cooked cabbage continues for 40 days of fermentation, and I suggest it as a second course more and more.”

“I wanted to make a dish with lentils, a classic legume that is used less and less. I adore it and it is at the heart of our territorial production. Today there isn’t a significant quantity grown, but the quality is great, like those from Santo Stefano di Sessanio. The lentils are steam cooked for 40 minutes at 95°C (200°F). The external stricter is unaltered, but inside, they become creamy. The individual legumes are whole, and all look the same. But how to use them? I began trying with the strangest things. At that time, we were studying hazelnuts in pastry-making and I wanted to try with lentils. They went very well together. So I began working on the structure, first with a hazelnut mousse at the base and lentils above. But it lacked moisture. So I thought about a gelatin made with the water from the steam cooking of the lentils, but it was too bland. I added mushroom powder, which is very good with hazelnuts, thyme, rosemary, garlic, marjoram and chili pepper. The gelatin was very powerful. But how to assemble the plate? I decided to assemble it directly in the dish: first the gelatin, then the hazelnut mousse and then the lentils (dry) dampened in the cooking water of the lentils themselves to replace the moisture. The result was surprising. Gelatin under, hazelnut mousse and water next, lentils above, and on top, truffles. We finished it with oil infused in Sulmona red garlic, which added verve to everything.”

“This is a sweet that, after Essenza in 2009, goes further in depth into my idea of a restaurant dessert. I didn’t want to create a break between savory and sweet, between the meal, whether a tasting menu or a series of savory dishes, and the dessert. The use of white vinegar, very aggressive and in some way anesthetizing for the palate, means that all the other flavors emerge gradually, little by little. The only sweet in the dish, the white chocolate, at that point gives a sensation of exaggerated sweetness. It feels like eating a real pastry dessert, even though there is very little sugar. After an important tasting menu, a dessert like this stimulates the mind, makes you smile. It is startling in its progression, amusing, but at the same time it continues the pathway of savory, going towards the sweet without adding additional heaviness.

This dessert is made to order, assembled directly at the moment on the plate. The icy granita of vinegar and licorice is worked with rice starch, which gives greater creaminess and persistence in the mouth compared to the classic granita preparation which has only a water base. When frozen, it is grated like shaved ice, but has a longer-lasting structure. It is a precisely calibrated dish, playing on the balance of flavors, acidity and structure so that aromas and textures go well together. Temperature and amounts are gauged at the moment to give those sensations.”

“The work on the lemon was a good job. The infusion was made working everything cold. We make holes in whole lemons and put them in cold water (1 kilo lemons, 1½ liters water) sous vide. We keep it all sous vide for 30 days at 4°C/40°F. The water acquires all the aromatic elements of the lemon. You might imagine an acidic juice, but it is a very, very complex infusion. You perceive acidity, but above all the bitterness of the lemon zest and the white of the skin, tone on tone. Here too, there’s a kind of stratification. I had tried to work with the lemon warm, but the results with cold amazed us. I think it’s a new frontier. You can do the same thing with other ingredients, for example turnip tops. Nothing oxidizes, you don’t lose nutrients, they don’t change. And in this way, the lemon, at the end of a meal, can fulfill all its positive functions, contrasting acidity and aiding digestion.

The peach: fruit at the end. It is placed, whole and peeled, in water and salt (1liter water, 50 g salt) for 24 hours. It is sliced, and before being served, the individual portion is ‘pressed’ sous vide. Using low pressure, the structure becomes glassy, crisp and translucent. Sweetness and freshness join the hint of salt and make the dish amusing, interesting, healthy and natural.

The wholewheat wafer with hazelnut paste: you begin with the hazelnut base, the same we use for the lentils, with a creamy consistency that you can change by adding or removing water. Here too, there is no added fat, just a drop of extra-virgin oil in the wafer.

Wafers of coffee with toasted white chocolate: the chocolate is placed in a 180°C/350°F oven for 30 minutes, in pieces. It comes out toasted with lovely caramel notes. Puree with water and natural gelatin until it has a consistency a little denser than custard. Use it to fill a small coffee wafer. Season it all with a little bit of ground Sarawak pepper. It is very aromatic and balsamic, gives pleasant sensations in the mouth, and a button just a centimeter in diameter fills the mouth with an explosion of flavors.

Bread and figs: the simplest of preparations. Crumble fresh figs with your fingers and add a little Sambuca. Leave to ripen for a day. Serve on a round of pan brioche sprinkled with cinnamon and star anise.

These are all elements we normally use at the end of a meal. Even etiquette books say that fruit follows dessert, because it closes the meal and refreshes, without being heavy, and it helps digestion.”