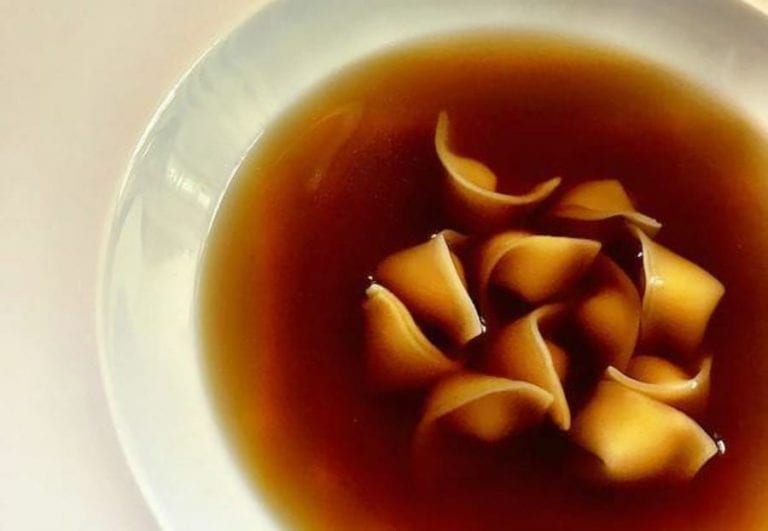 Remove, lighten, focus, subtract: these were the principles explained in the book “Ten Cooking Lessons” written by Niko with Laura Lazzaroni. Here are the first 5 five dishes.

If the starring ingredient is absolutely recognizable, it is also true that the complexity in Niko Romito’s preparations almost has the force and depth of the great abstract canvases of the twentieth century, in which tone on tone amplified the possibilities of color. The work doesn’t only consist in removing, but in removing the ‘wrong’ things. In his book, “Ten Cooking Lessons”, written with Laura Lazzaroni, the chef explains the principles of his cuisine. Here are the first five dishes.

“This is a dish that represents Casadonna. The misticanza wild greens grow abundantly all around. They can grow only here. It is a starter vegetable course, and it changes during the year according to the different herbs that grow and make up the misticanza. April, May and June are the months when this recipe is at its best. The dish has a pathway and a logic that is totally connected to this location. It was planned and carried out with the help of Andrea Pieroni, the professor of ethno-botany who teaches the students in our school. He takes them around in the woods and fields to discover spontaneous herbs. He has introduced them to an amazing variety of local, edible wild greens. Here, as with the pancetta, we use gin: Monkey is very vegetal and doesn’t cover the herbs, but brings out their flavors and aromas.

The work on the almonds finished the dish. I use them dried, rehydrate them in water for 24 hours, then freeze and puree them in a Pacojet. A dense almond paste results, which I serve at a temperature of about 6°C (43°F). I modify the structure, which is very dense, adding a drizzle of water. It is perfect under the misticanza of wild greens. It creates an incredible balance, a continual rapport between vegetal, bitter and sweet. As an opener on the menu, it activates salivation, but it isn’t a simple salad. It is a more complete and complex dish.”

“This is part of the work we do on mushrooms and their structure. Usually mushrooms, no matter how they are cooked, are fairly soft, unless you eat them raw. So I aimed at obtaining a more solid consistency. I wanted to prepare the mushrooms with many herbs: thyme, tarragon, marjoram, garlic, parsley, rosemary. They are cooked sous vide at 65°C (150° F) for 20 minutes. Once cooked, they stay sous vide for 15 days at 4°C (40°F). During this period, the herb aromas enrich the mushrooms. This aging makes the mushrooms very fragrant, the structure stays firm and doesn’t oxidize, so it keeps its natural color. When I cut the cardoncello mushroom in half, it is very white. It looks freshly picked. Because the central ingredient is the mushroom, I didn’t want to use other things that distracted attention. So I thought of a broth of just cardoncelli, a classic vegetable broth, the mushrooms in infusion, and very reduced. From 2 liters, I obtain 400-500 grams of liquid at the end. Then I season them with the herbs that I used when cooking the mushrooms, but adding ginger, licorice and star anise. That’s why it ends up spicy and fresh, very Italian but also very exotic. Tarragon is an herb that is very commonly used in southern Italy. It feels like eating meat. Then with a pinch of rice starch, I give the broth a slightly thicker and almost shiny consistency. This increases the persistence of the broth in the mouth and reduces the contrast of structure with the mushroom. And without a gram of fat.”

“This came out of our work on filled pasta. It is a dish with no sauce, served in a way that is almost off-putting. There are two featured ingredients here, and they have to have the same dignity – the pasta and the filling. I love chicken. Here too, I began to work on many fronts. It was chicken alla cacciatora that inspired me, with its capers, anchovies, vinegar, rosemary. Once cooked, I realized I had two absolutely marvelous things in front of me – the sauce and the meat. I decided to make a pasta filling with the meet. The sauce, strained and completely clean and de-fatted, could be an element to reinforce the flavor of the filling. I also love celery, which I think goes very well with chicken. I freeze-dried the celery and reduced it to a powder, almost like powdered sugar. Then I focused on the pasta. It has to be very porous and consistent, but at the same time very thin. It must be firm in the mouth, make itself felt and not melt. It has to have consistency. To bring the tortelli to perfection, I left them to dry for almost an hour under fans. Then they’re ready to be cooked, but not for more than 30 seconds. Next they are heated in a pan with the chicken sauce. The pasta absorbs it completely, reinforcing the flavor. I was missing a fresh, elegant element, and that was the celery. Sprinkled on the hot pasta, it melted and didn’t leave any trace on the surface. This is a very powerful dish, both sweet and elegant. The contrasts offer harmony to trained palates. It is a difficult dish, despite appearances. It has almost no added fat, and not for health reasons, but because the taste is concentrated and cleaner. That is what led me to have a dish that was ‘simple’ and healthy.”

“This is a work that comes out of experiments with almonds and nuts in general, somewhere between cooking and pastry-making. I begin with the almond base that I use for other preparations, as we saw with the misticanza. The base is a preparation in which I modify the structure of the ingredient, without, however, modifying its flavor. Since I was enthusiastic about almond paste, I wanted to try to put it into filled pasta and give it a starring role. It is very fatty (but it’s a natural, healthy fat), dense and slightly sweet, although with bitterish notes, and it’s mouth-filling. All in all, it’s a basic product that is very complex and has depth. I’ve also had a passion for broth for a while. So I began to work on a broth that could play against the characteristics of the almond base: sweetness, bitter notes, fullness, earthiness (nuts are very good with mushrooms). I put thyme, marjoram and onion in the broth, but I wanted it to be even more complex, so I passed it quickly through smoky black tea, just enough to give the liquid a smoky flavor. Then I filtered it. The broth changed color completely and acquired great complexity with smoky notes. Then I infused it with dried porcini mushrooms to increase the forest flavor. It’s perfect with the almonds, a dish without a gram of fat, but still very rich, complex and powerful. This is a plate for winter, spring and autumn.”

“A very Italian, decidedly Mediterranean dish. I have never used parsley in my kitchen, except in a very few cases, I have asked myself why. At the end, I decided to work on the parsley leaves until I achieved a powerful sauce made simply with parsley, water, garlic and anchovy colatura – their liquid. I really liked it, but where and how to use it? So I archived it, waiting for the right occasion. For about a year I have been putting more fish on the menu. Obviously, I wanted to test myself with sea bass. Last winter I had already tried with white truffle, but I wanted a dish in which the sea bass was the absolute focus. As usual, I begin by working on cooking methods and consistency. I finally came to cooking it in two ways after seasoning it with wild fennel and garlic. The first cooking is for 3 minutes. The whole fillet goes in a very hot oven (220°C/425°F) and undergoes a thermal shock that toasts the outside, compressing the fibers, so they swell upwards. The fiber of the fish hardens, but doesn’t dry. It compresses, and the flesh becomes more compact. But I can’t go more than 3 minutes or it would dry too much. So I take it from the oven, lower the temperature to 55°C/130°F and put the sea bass back in for another 20 minutes. The fish finishes cooking and stays moist. It was delicious when tasted just cooked. But I wanted a more complex dish. So the parsley sauce came to mind. I thought it would be perfect for the sea bass. But still, sapidity was lacking, something that would be original, not just salt. I thought of capers. I dehydrated them and turned them into a powder, and sprinkled the powder on the fish.”