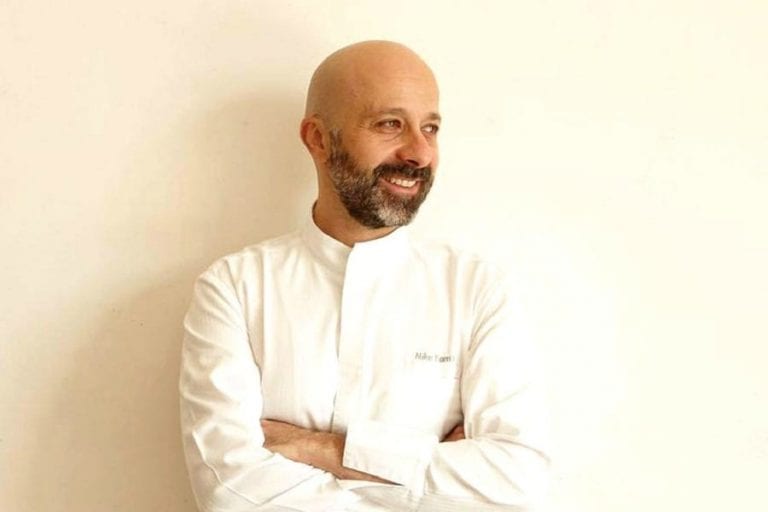 Eating well in hospital? Now it’s possible thanks to a groundbreaking project launched by Niko Romito. The protocol draws techniques from haute cuisine and takes them to collective dining, with a net reduction of waste and loss of nutrients through healthy and flavoursome recipes which help patient response.

Fine dining in hospitals: this is not grounds for gourmet stardom nor glossy, slick recipes. Nutrition in health centres is an important challenge and which has been ignored for far too long. Mainly the correlation between illness and nutrition. We know how influential healthy eating is for our well-being. Despite this, Italians tend to not eat healthy. Obesity, especially in young age has reached emergency figures. Foul nutrition is widespread, paradoxically at a time when all the press talks about is food. Health centres are no exception: the average quality of hospital food is low, very low. Cases of bad nutrition, both in lack or surplus are alarming, “we’re registering 60% overweight and obesity in hospitals”, says Lorenzo Maria Donini (Department of Human Nutritional Sciences). By the same token there are cases of malnutrition due to many factors, for example forms of old-age anorexia and bad nutrition.

In order to contrast this situation experimental and interdisciplinary project NI-Nutritional Intelligence promoted by GioService was conceived. The project offers services to hospital and other healthcare facilities and has gathered a dream team that includes Human Nutrition Science and Research Unit of Università La Sapienza in Rome, and chef Niko Romito of Reale restaurant in Castel di Sandro. The team brings medical science and gastronomy to define a protocol and procedures capable of assuring patients a healthy, nutritious and flavoursome health plan. The certifying body is AnalysisGroupwhich, in turn, has devised a system to certify the nutritional value of ingredients and finished dishes. This is a small revolution that has defined new analysis markers, for example deterioration and oxidation; and that has highlighted how improper preparation of foods comes with loss of nutrients and antioxidants. A survey conducted on 500 dishes crunched out thousands of numbers in a veritable scientific research study.

Romito not only will provide ad hoc designed recipes, but also create a system that will be “applicable everywhere and able to bring benefits to both patients and hospitals” as stated by Andrea Sponzilli of GioService. Ultimately these changes will have a positive impact on society.

A balanced nutrition is both adequate to the various illnesses treated and is key to positive patient response to medication. Food prevents, heals and becomes the ally of therapy. But balanced meals is not enough, they also need to be tasty. A well cooked food most probably also retains nutritional values therefore represents essential nutrition for patients. In addition to this, the quality of food has to do with the quality of life of patients, their overall well-being contrasts the dehumanization that happens in hospital, especially in long term hospitalization. Mood, responsiveness to medication, psychophysical  balance. And much to do with dignity. As well as effectiveness of treatment. This translates into faster healing process and improving national health care by increasing the number of patients treated. Not to mention how this can become an opportunity for food education, encouraging patients to continue on the healthy eating plan at home. Eating well to heal, which sounds like utopia.

But we’re talking reality now. Hospital food is horrible. Flavorless, bizarre textures, bland colors, and as a consequence, all nutrients are practically lost. Those who have willing relatives, eat what is brought to them from home, but this happens under no medical supervision. This also constitutes an enormous food waste: after a few bites meals are left uneaten. Of meals served in hospital 45% are sent back uneaten. The math on the 200 million yearly meals is astonishing. Price-wise too. A waste of this size and the lack of consideration given to the importance of nutrition during medical treatment is unacceptable.

After a year of studies, tests, definition of procedures for a constantly good result, a varies, healthy tasty and affordable eating plan was launched. Why affordable? Because thanks to smart prep and cooking methods ingredients are used at their best. In this way waste is reduced to a minimum, including that 20% ingredient depletion lost through cooking. The plan also foresees reuse of leftovers for broths and stocks, eliminating MSG and creating a “circular” ingredient use. In the end, the nutritional and antioxidant value of these dishes is 1.5 to 12% higher than the average equivalent traditionally prepared dishes. Same goes for flavour. “I start approaching dishes using the same ingredients normally employed” says Romito “it would have been too easy working with other ingredients which are not sustainable for collective dining. I have furthermore discovered that in some cases these are actually very good ingredients, like the tomatoes”. That’s the starting point, from there Romito developed his own haute cuisine techniques and procedures inserting them in the collective dining context, so beyond hospitals to schools and other “cafeterias”. The regimented protocol includes ingredients, recipes, cooking methods and detail transformations to reduce variables to a minimum. Individuals preparing said foods need to be trained.

Recuperating scraps and leftovers, sous vide and steam cooking, low temperature, oven baked dishes (packaged with a protective starch film to maintain them intact – like for example to avoid protein collapse in meats and jus loss). Another idea is using a special salt and sugar brine for cooking frozen vegetables, and blast-freezing foods to avoid risk of bacterial contamination. Examples? A tomato is cooked sous vide with precisely measured herbs and salt: there’s flavor without fat and no percentage of product lost through evaporation.

Perfect. But what are the costs hospitals will be facing for the program? Two types, to be exact. New hardware (higher performing ovens and refrigerators; a sous vide implement; and heated carts for transporting meals from kitchens to bedside. And then there are costs for training personnel. Is this sci-fi? No, the system is already being tested in two departments of Ospedale Cristo Re in Rome. Results are exceeding all expectations. Come December 15 the new kitchen at Cristo Re will be fully operational and the pilot project will enter a more advanced stage.