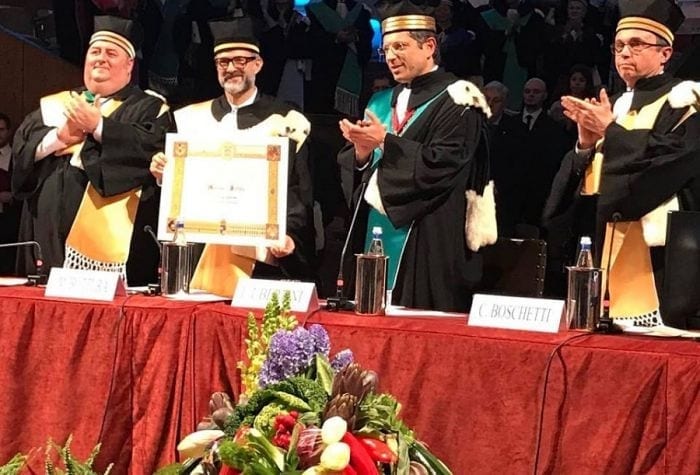 Laurea ad honorem from Università di Bologna for Massimo Bottura, the top Italian chef from Modena. On hand were also university president, Rector Francesco Ubertini, professor of Business Organization Max Bergami, who inspired and promoted this ceremony, director of Business Sciences Carlo Boschetti and the Minister of Agricultural, Food and Forestry Policies, Maurizio Martina. The chef was deeply moved as he received the prestigious recognition of his role as an exemplary entrepreneur, not just as a chef at the peak of the world's ratings. "The pathway taken by Massimo Bottura rises between entrepreneurship, culture, and skill. It represents a model for the diffusion of Italian culture and for the international development of Made in Italy", explained Rector Ubertini. He further explained the considerations that determined the honor, "among the most solemn in the academic world", "Massimo Bottura represents an exemplary case of the management of a small Italian family business that attained within a few years unprecedented success and recognition on a global level. From a business point of view, he carried out a deliberate growth strategy, aimed at developing quality and international visibility, through vision, entrepreneurial ability, the creation and management of his team, and product innovation, while maintaining an extremely high level of service".

Moreover, his commitment to the community was often referred to during the afternoon: "Bottura is not only creative, but is a man who knows how to share the results of his actions with society, acting in the nerve centers of our time". After Massimo Bottura accepted the diploma and spoke to the audience, emotions ran high. He first mentioned his deceased mother, then moved gracefully through his own story and that of the team that has always been at his side, in Bologna as well, and present in the Aula Magna hall. This is his world, built alongside this group, which he compared to a Renaissance workshop, a laboratory of ideas where style and culture are shared. It is a movement capable of creating food-centered tourism. "We are the entrepreneurs of the beautiful and the good, del bello e del buono", he asserted. He spoke of energy, positivity, marvel, motivation. And doubt. "We like to win every time", he said, so it's important to play "with one's heart and mind", while at the same time taking into account "the ability to know how to be mistaken, tripping over the unexpected, in order to see the world from another perspective".