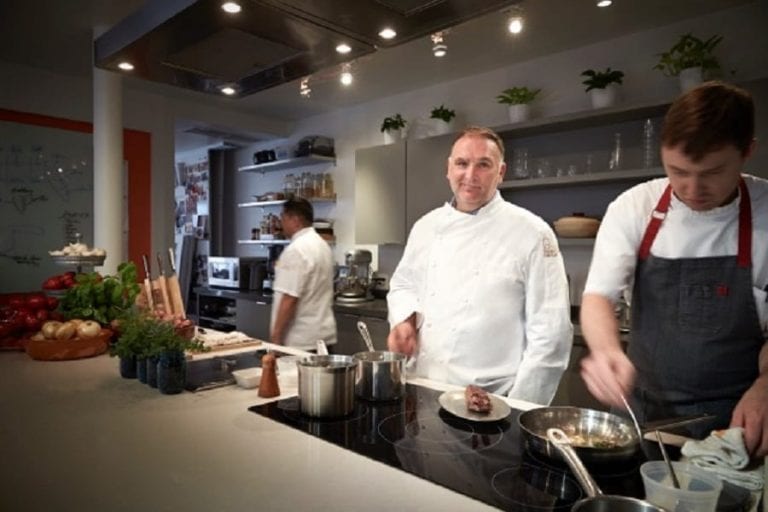 Culinary avant-garde, five-star enterprises, TV and publishing, commitment to social issues, didactics: José Andrés – one of the world’s 100 most influential people according to Time Magazine – is the chef of TFG, ThinkFoodGroup.

The chef responsible for shifting America’s culinary scene in the last 20 years, Spanish originally from the Asturias, José Andrés, is the Hot Restaurateur according to Condé Nast Traveler, and the man who has introduced traditional and avant-garde Spanish cuisine in the US. In 2010 he was bestowed a medal by the Spanish Order of Arts and Letters for promoting Spanish culture abroad. He divides his time between his many award-winning restaurants, teaching duties, TV appearances, activity in the fight against obesity and the hunger emergency. The man is unstoppable, and alongside President Obama, Andrés is also working to divulge alimentary education to reduce food waste. Andrés is furthermore proprietor and chief chef of ThinkFoodGroup, the creative team responsible for renowned dining concepts in Washington DC, Las Vegas, Los Angeles Miami and Puerto Rico including Minibar by José Andrés, Jaleo and The Bazaar by José Andrés at the SLS Hotel Beverly Hills, Las Vegas and South Beach.

He’s come a long way from the beginnings in small-town Mieres, in the Asturias: from hotel management school, to the first training steps in the kitchen of Ferran Adrià’s “El Bulli”, all the way to photos taken with the POTUS posted on Twitter. Now José Andrés is an internationally acclaimed culinary innovator, published author, university professor, TV celebrity. Time Magazine has listed him as one of the world’s 100 most influential people, and he has been numerous times recipient of the James Beard Best Chef Award. A genuine and overpowering personality, with an innate artistic sense and boundless creativity: there could be volumes written on José Andrés, but these could only partially record the complexity of his persona.

He is the chef responsible for shifting America’s culinary scene over the last two decades, introducing modern Spanish cuisine concepts as well as traditional tapas, and the man able to change the United State’s opinion on food and nutrition. Creativity, molecular nuances, whim, but also a deep knowledge of food and its ethics.

José Andrés has made himself available for this interview upon his return from the first and historic State visit of President Barack Obama to Cuba where the renowned chef presided as the United States’ culinary ambassador.

You have been known to say, “Eating has to be entertainment”. Your creations often draw inspiration from molecular cuisine and are a constant source of surprise and entertainment for those who savor it. But how much technique and research are behind each dish?

I believe creativity is something that happens naturally as long as you’re dedicated and committed to your work. I am supported by a fantastic team of chefs that on a daily basis devises ways of cooking food in new forms. My Minibar Restaurant is the nerve center of my business and the place where the most intense research, inspiration and redesign of familiar dishes happens. There is huge dedication behind the playful side of our dishes.

Your cuisine is everything but conventional. What is the relationship with your wine directors and sommeliers who have the challenging task of pairing wines to your dishes?

As chef I create dishes by cooking and blending thousands of flavor, texture and aromatic combinations. If you ask our Master Sommelier Andy Myers, our Sommelier Jordi Paronella, or our Cocktail Innovator Miguel Lancha, they will all tell you the same thing: pairing beverages with dishes is like a couple dancing. One partner has to react to the other’s moves, accentuate, gently contrast or delicately comply the motions of the other. This is how I work with my sommeliers to find the harmony of the dance, finding balance in the gastronomic experience.

What does José Andrés drink? Which wines have surprised you and in some way changed your life?

I must name many examples. Let’s begin with Alvaro Palacios, who is a dear friend: his Priorat Ermita Velles Vinyes is not an everyday wine, but it is certainly the type of wine that best shows how much quality is behind a product. Then among my other favorites are the Rioja wines of Fernando Remirez de Ganuza: they are astonishing, made from the best hand selected clusters of sixty-plus year-old vines. If I opt for a white, I drink the exquisite Verdejo Rueda Belondrade y Lurton made by my friend Didier Belondrade or the Sketch by Raul Perez (Editor’s note: Albarino, Rias Baixas) born from vines planted on cliffs overlooking the ocean and aged under water.

In my personal selection Italian wines are always present. If I have to choose one above all, I go classic: Amarone della Valpolicella by Romano dal Forno, rich, intense and full-bodied. I also have a passion for Greek varietals, in particular Assyrtiko by Thalassitis (Santorini) which brings mineral, volcanic elements directly into my glass. Lastly, I cannot ignore the United States: the wines of RDV winery in Virginia are truly special, they deserve to be noted as some of the best in the world.

When I mention Italy, what is the first gastronomic reference that comes to mind? The first aroma? The first flavor?

The very first gastronomic reference is cannelloni: when I was a child growing up in Catalonia I ate Italian food without even knowing it. “Canelones a la Catalana” are a traditional dish of the region, but later growing up I discovered that they hail from Italy. Another reference that comes to mind is burrata made with buffalo milk: when I was 17 years old I lost a bet with Ferran Andrià, thinking that such a delight could not come from the milk of a water buffalo. Amazing.

The first aroma is truffle: the white truffles of Alba delivered to my chefs at SAAM of Beverly Hills permeate the air with delight.

As far as flavours (there are more than one, obviously): creamy saffron risotto ‘alla milanese’ made at Ratanà, or a Cipriani Bellini. The food of Mario Batali, who has done so much for Italian cuisine abroad. And everything about that unforgettable lunch with Maestro Massimo Bottura. My chefs at Minibar Restaurant use his balsamic vinegar Villa Manodori to complete our Parmesan shaved ice.

What suggestion or encouragement can you share with young chefs with big ambitions?

In 1992 the great restaurateur Richard Melman gave me this piece of advice while I was cooking for an event in Chicago: “Whatever decision you make in your life, throw down the anchor and stay there”. This gave me the necessary determination to fulfill my ambitions. Every day of my life I also find inspiration in the words of Winston Churchill: “Success consists of going from failure to failure without loss of enthusiasm”.