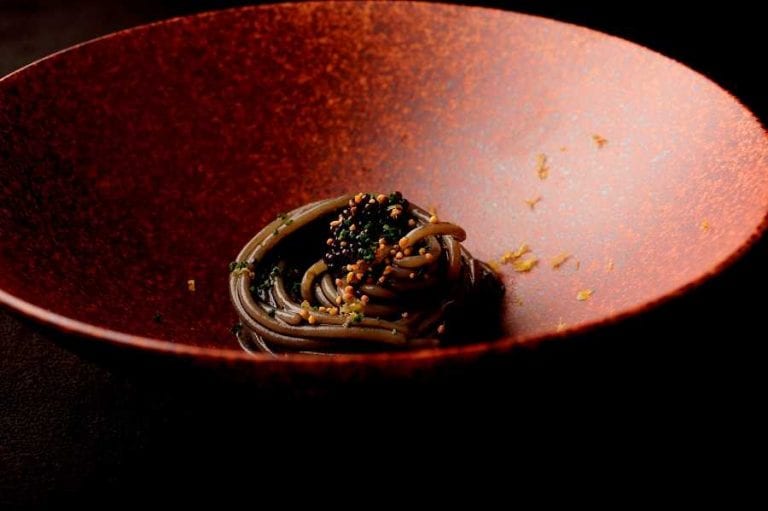 Eating Italian food in Asia is no longer an experience to avoid, as it was up to a few years ago. Today fine-dining restaurants, pizzerias, trattorias and wine bars in Asia can measure up to many on the boot. Having launched the Top Italian Restaurants guide, we traveled around Asia for three weeks to celebrate […]

Eating Italian food in Asia is no longer an experience to avoid, as it was up to a few years ago. Today fine-dining restaurants, pizzerias, trattorias and wine bars in Asia can measure up to many on the boot. Having launched the Top Italian Restaurants guide, we traveled around Asia for three weeks to celebrate those who stimulated our culinary sensibility, to test new restaurants, and to see what was most loved and least popular about Italian cucina. What happens when Italian food meets local taste?

Our tour began in Japan. “Here they don’t like dishes that are particularly salty. Their threshold is different from ours. Very fatty consistencies don’t go over either,” Luca Fantin told us. He’s a star among Italian chefs abroad. In Tokyo for 8 years, he won our Tre Forchette Tricolore award. “From the Japanese I learned discipline and perfectionism in procedures ranging from fish preparation to smoking foods, which here is very delicately done and never invasive.” Working together with Luca we found one of the best pastry chefs we met in our travels: Fabrizio Fiorani, Roman, who, like Fantin worked under the baton of Heinz Beck (La Pergola) in Rome. “By the end of dinner, clients are tired and need something that awakens the senses, that makes them laugh,” Fabrizio added. His desserts combine great technical verve and playfulness in an extraordinary mix of consistencies and shapes. To have dinner at the restaurant bearing Luca Fantin’s name in Bulgari Ginza Tower is a complete culinary experience, the outcome of a complex process perfected with the help of over 50 local suppliers. From Italy comes wine, olive oil, cheeses, rice and truffles. A meal is a product-based menu, exquisitely seasonal, Italianissima in its approach and sensibility. For example, Il mercato secondo Luca, The Market According to Luca, is a sequence of ten dishes, varying according to the season. Spaghetti Monograno Felicetti with sea urchins is a dish that deserves framing, masterful in its hint of pepper. This was our third experience at the restaurant, and it is constantly improving, the accomplishment of a team of experts that have been together for a long while, a rare happening in Italian restaurants abroad. A few minutes away by taxi is another restaurant that won Tre Forchette, Heinz Beck Tokyo, opened in 2014 thanks to the talent of Giuseppe Molaro from Campania. He manages to alternate the classics of Italo-German chef Beck with dishes that showcase excellent local products in a total experience of fine dining. “It was very difficult at the start, but now we are experiencing great satisfaction,” Giuseppe told us. The third restaurant to achieve the highest award is Faro Shiseido, also in Ginza. “Recently game has been in demand. As for wine, our clients always want to know more about it, and our wine lists are improving a great deal from our search for depth,” said Renato di Sarò, general manager, who comes from experiences with Gualtiero Marchesi, Giorgio Pinchiorri and Joël Robuchon. Our award for a solid restaurant with traditional cucina went to the admirable Elio Locanda Italiana, where flavors from the Italian South are paired with a great selection of wines. The best pizzeria proved to be Giuseppe Ericchiello’s Peppe Napoli sta’ ca’ while Bar&Enoteca Implicito was the top wine bar.

Opening an Italian restaurant seems to have become a new hobby in Taipei. New places ranged from small regional bistrots to more innovative formats like Il Mercato, with its new equipment, a solid wine list put together by Giuseppe Vaccarini, and a totally Italian team in the kitchen. Among restaurants, Marco Lotito’s Il Sorriso also stands out. Piccola Enoteca in Zhubei City, an hour south of Taipei, is Boris Wang’s place, where he offers excellent Italian products and a major wine list. Many local restaurateurs invest a great deal in research. They travel to Italy often to study, to find inspiration and to import ideas and new formats as well as traditional ingredients. The regional focus is the most prevalent. “The first year was very complicated. Many dishes were sent back to the kitchen. But we are convinced that we have to maintain our identity – no overcooked pasta, no invented recipes,” said Riccardo Ghironi, the chef at Taverna De’Medici. His specialty? Testaroli dell Lunigiana, a house-made Tuscan pasta.

Beijing is proving to be the Asian capital for Neapolitan pizza. Our winners are two pizzerias better than any others in China, Bottega dei fratelli Salvo (where they also make an excellent Genovese pasta) and La Pizza, both in the zone of Sanlitun, the neighborhood where the Italian Embassy is also located. Among restaurants, at the top is Mio, in the Four Seasons hotel. It is led by creative young chef Nello Turco. His cucina is one of contrasts and borrowings, the outcome of his experiences with Heinz Beck and René Redzepi. Opera Bombana offers the solidity of chef Marino d’Antonio’s cucina. Among the trattorias, our award went to Mercante, where Omar Maseroli cooks authentic cucina emiliana among the narrow streets of the old city, the hudong. “Beijing’s clients are very conservative in the kitchen and it is very hard to offer them authentic Italian cucina,” commented Fabio Nompleggio, chef of Cèpe, the restaurant in the Ritz Carlton hotel. Among his signature dishes is l’amatriciana in broth and perfectly prepared venison tonnato.

Today it is easier to find excellent red shrimps from Mazzara or a truffle from Alba in Hong Kong than in Bologna. Major investments and untrammeled competition have made Hong Kong one of the world capitals for cucina italiana. “We can get anything in Hong Kong. There are no restrictions. Many new places are opening promoting Italian food,” said Paolo Monti, chef at the well-established Gaia, founded in 2001. Hong Kong, along with Tokyo, has the largest number of restaurants to win our Tre Forchette. That award went to Tosca, thanks to the style of chef Pino Lavarra, 8½ Otto e Mezzo Bombana and Grissini, flagship restaurant of Grand Hyatt. While Tre Gamberi went to Giando, the restaurant of Giandomenico Caprioli, with its focus on fine products and an extraordinarily deep wine list, including Barolo and other fine labels from the 1950s. “In the last few years, the economy of Hong Kong has slowed down. Certainly it’s the China effect: salaries have been cut. But the extraordinary interest in Italy continues, calling perhaps for simpler restaurants with more informal menus,” Luca de Berardinis, Operetta chef told us. Here we found one of the best researched and most contemporary selection of Italian wines, with the spotlight on Italian producers and artisans.

The drive to reduce pollution seems to be working in Shanghai. The sky was bluer than we’d ever seen it. Neapolitan pizza suffered, though, due to its preference for the now-forbidden wood-burning ovens, we were told by chef Jacky Xue, owner of Primo 1 and winner in the fine dining section. “I fell in love with Italy. I opened my first restaurant, Top Chef, but now is the time to aim higher. People in Shanghai are ready for another kind of Italian cucina. I make elegant food with a mix of superior Chinese products and excellent Italian specialties,” Jacky said, as he turned out a perfect espresso for us. Among the trattorias, the ‘real Italian consul’ in Shanghai won – Marco Barbieri and his Da Marco. For twenty years he has offered solid, authentic cucina, including excellent, well-seasoned grilled chicken and delicious peppery mussels. Finally, another very young chef won in the fine dining section. Age means little abroad when it comes to accomplished chefs. Natalino Ambra works in the Va Bene restaurant, an appealing place in the heart of the French Concession. “Six years in Shanghai is a long time. There are many limitations, but with a bit of organization, we solve everything. For example, I purchase cheese way ahead of time to avoid the many restrictions and limits the Chinese government can impose.”

The Surgiva Taste&Design Award made its debut during our Asia tour. This mineral water, which originates in the heart of the Parco Naturale Adamello Brenta in the Trentino region, is the main sponsor of the Top Italian Restaurants guide. The award was created to showcase those places that combine fine food, good service and love of detail. During the Osaka event, the award went to Luogo di Takeuchi, a restaurant with only a few tables that has been offering Italian cucina characterized by wonderfully clean flavors, and where the staff looks after clients tenderly, putting them at ease with a few deft gestures. In Tokyo, the Surgiva Taste&Design award went to Faro Shiseido, on the tenth floor in the heart of Ginza. And finally, in Hong Kong, the Taste&Design award was handed to Top Italian Restaurants’ Chef of the Year, Alessandro Cozzolino, executive chef at Grissini, and only 27 years old. This historic Italian restaurant, located inside the Grand Hyatt Hotel, offers a memorable view of Victoria Harbour and the Kowloon skyscrapers, combining careful service, essential, elegant design and a cucina of extraordinary identity. Even a single strand of precisely cooked spaghetti, with red shrimp and basil pesto in perfect harmony, can demonstrate the talent of one of the ablest young men we met on our world tour.