Internet of Things. How does it work if applied to the farming world? 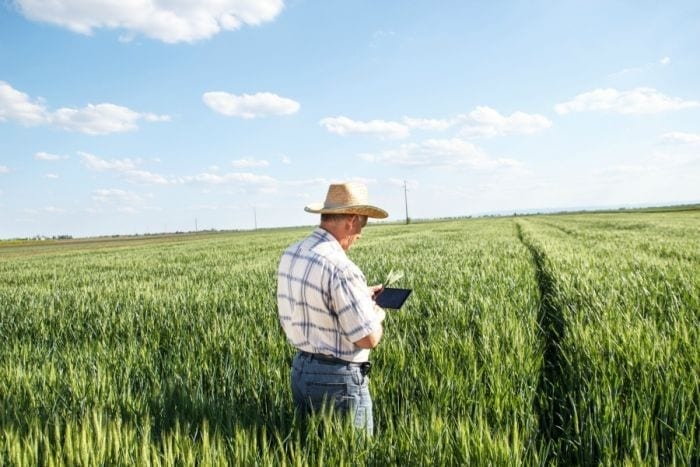 A year ago Marco Gualtieri (in a March 30, 2015 article) had predicted it:“in the coming yeard there will be an acceleration in precision agriculture, based on the work of drones and technological innovation”. We are indeed deep in the heart of Internet of Things even in the agricultural sector.

Through software, applications, web, close circuit cameras and sensors, the Internet of Things could actually (in theory) maximize production, reduce risks to a minimum and increase efficiency even in a traditional field like agriculture. How is that possible? When addressing the topic of IoT it’s easier to explain through tangible examples. New tech solutions are numerous and focus on varied themes, from productivity to control of phyto-pharmaceuticals, from safety in the production process to sustainability. Some examples, to mention a few: to increase productivity there are technologies specialized in gathering data regarding soil and weather conditions (air humidity, temperature, intensity of sun rays) that are functional in order to predict crop outcome and optimize sowing plans, pinpointing both the best areas for growth and the best crops to cultivate. Through the employment of sensors and software, it’s possible to monitor silos and conveyor belts to quickly identify any issues, which can be immediately notified to the pertinent personnel. As the saying goes, as far as damages go, better safe than sorry. To reduce environmental impact, there are other sensor and cameras mounted on trees that can spot parasite attacks. In this way the farmer will only use strictly necessary pesticides and only where needed, nothing more. This reduces costs and environmental impact. Moving in the same direction are also other farms that use similar technology (cameras and sensors) in organic farming. How? Integrating l'Iot to traps and pheromone bulbs placed directly on the branches. Artificially selected female pheromones attract male pests and trap them. This is however a digression. The “smart agriculture” manages to reduce costs of water supply and plant treatment, for example, while maximizing production. All with the added bonus of the advantage for the environment.

Are IoT technologies an indispensable ally?

They definitely make life easier. Including those applied technologies deriving from drones, like satellites, which in some cases can substitute the expert farmer’s human eye while guaranteeing constant monitoring of the cultivated areas. This happens for example in the rice paddies of the Tenuta Castello, in Desana. “We use satellite photography for both sowing and for levelling” explains Marco Vercellone, owner along-side his brother Edoardo, of the business. “For the former, the satellite is connected directly to the tractor, which moves according to correct lines, without overlapping the seedlings in its comings and goings”. Until only a few years ago, this operation required a couple farm hands, the first in the tractor released the seeds in the paddy, the second standing on the levee, would instruct the man on the tractor where to work and move in order to avoid over- or under-sown areas. “Many fields need furthermore to be levelled, because in certain areas the paddies form deeper pockets where the rice would have trouble growing because of the higher water level, and other shallower areas where the weeds would emerge and take over”. Levelling is a practice that’s been carried out only for the last two decades.“In this case the transmitter machinery is placed on the edge of the field on a levelled tripod, and which emits a laser beam at 360°. The tractor drags a blade where the receiving laser end signals the onboard computer on board the tractor. The blade lowers gathering or releasing soil where needed”. And how about to distribute fertilizers?“For us it’s easier to monitor the situation with the naked eye, mainly because we’ve always used very little chemical fertilizers, and only to bring more nitrogen, phosphorous and potassium to the soil where needed”. The Ente Nazionale Risi organization does not actually agree.

From satellites to drones

One of the issues the Ente Nazionale Risi organization wishes to address in its research is exactly the correct dosage of nitrogen fertilizers to maximize production (and therefore income) while still preserving the environment. A recent study by the organization reads thus: “Thanks to precision agriculture it’s possible to manage nutritional disparity within each plot, limiting the imbalance in nitrogen nutrition”.These imbalances can deeply penalize both production and yield, not to mention the environmental aspect of the rice crop. Which precision technology are we talking about, specifically? This is where drones come into play, thanks to which it’s possible to find and quantify the differences in nitrogen nutrition. “the images gathered by the drone-camera body [...] allow to associate different level areas the optimal fertilizer dosage to uniform and maximize the production of each paddy field”. What’s necessary now is understanding tangibly if these new technologies are actually useful to the farms. That’s why, since 2014 – thanks to a Kellogg funded project, which has been added to the sustainability program Origins – it’s possible to test the technology on a full business scale. The result? The adopted technologies have managed to bring on a productive improvement. On the other hand, what’s happening in the vineyards? Find out in the next episode.