In Todi there’s the oldest agricultural school in Italy, and it’s a model of modernity 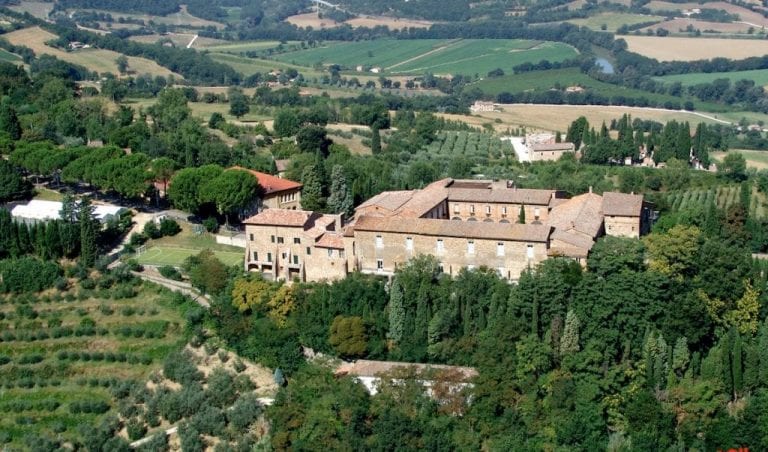 Drones, vineyards, social farm, wine cellar, cheese making facility: the Ciuffelli Agrarian Institute in Todi is the oldest in Italy. An exemplary project, and now a book illustrates it.

On its first day of school there were 8 students, all males (the first female was enrolled over 100 years later). It was May 17, 1863 and the first agricultural institute in Italy was inaugurated in Todi earlier than expected. At the time it was called the agricultural colony and was born thanks to the income of the religious entity “Opera Pia della Consolazione.” The first change occurred about twenty years later, when it became the Royal practical school of agriculture, in 1921 named after the politician Augusto Ciuffelli. From there a series of leaps forward: Royal middle agricultural school, then the Augusto Ciuffelli state agricultural technical institute of Todi (1933 – 1997), then the Augusto Ciuffelli technical agricultural and agri-environmental institute of higher education (with aggregate section State professional institute for industry and craftsmanship in Todi). In 2009, together with the commercial and surveyor technician Luigi Einaudi, he became the Ciuffelli – Einaudi higher education institute.

The oldest agricultural institute in Italy. The book

More than a century and a half after its inception, a volume celebrates this long history and testifies to its beginnings. “It was believed that all the documentation of the first 30 years had been lost,” sid Gilberto Santucci, director of the educational farm of the institute and author of the book “The oldest agricultural institute in Italy” together with Marcello Rinaldi, school director of the IIS Ciuffelli-Einaudi Todi. The discovery of a first document set in motion a chain of recoveries, and one after the other all the texts came to light, “starting from the pre-foundation” which account for the political, cultural, social debate that was at the origin: “everyone, albeit from different positions, imagined a school that could raise the level of education of the local farmers.”

The volume is the result of three years of work, and narrates the path of the Italian institute of agricultural training, starting from the history of the institute: the first innovations, the relationship with the territory, but also the teaching methods of the time, in which practice was paramount. And then, the photos – the oldest dating back to 1877 – which illustrate how the students dressed and lived. The first, among the 5,000 graduates of the institute.

When the professional order of Agricultural Experts was born in 1926, the Ciuffelli agrarian institute was one of the 6 institutions in which those who had not attended school could submit an application for the entrance exam. And with the application, documentation of the work done in the vineyard, in the fields and in the organization of farms. A precious testimony, “a beautiful and enormously important fresco on agriculture in Central Italy of the early 1900s.” 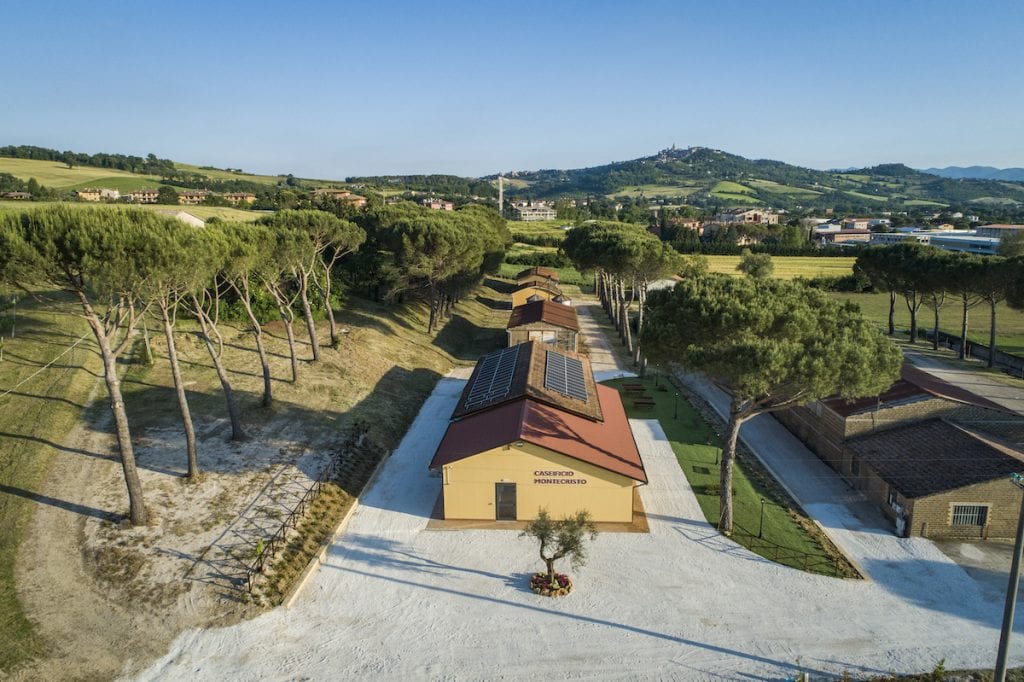 Currently the institute enrolls 530 students, 30% of which are girls. They are youngsters with a particular sensitivity for the landscape and the environment, some are part of agricultural entrepreneur families. Many, about 150, come from outside and reside in the boarding school that “from the post-war period to today has hosted students from 17 Italian regions and 8 foreign states.” After all, there is no shortage of space: the site is a former monastery from 1248, “the first burial place of Jacopone da Todi and where, in the second half of the 19th century, an agricultural citadel was born.” 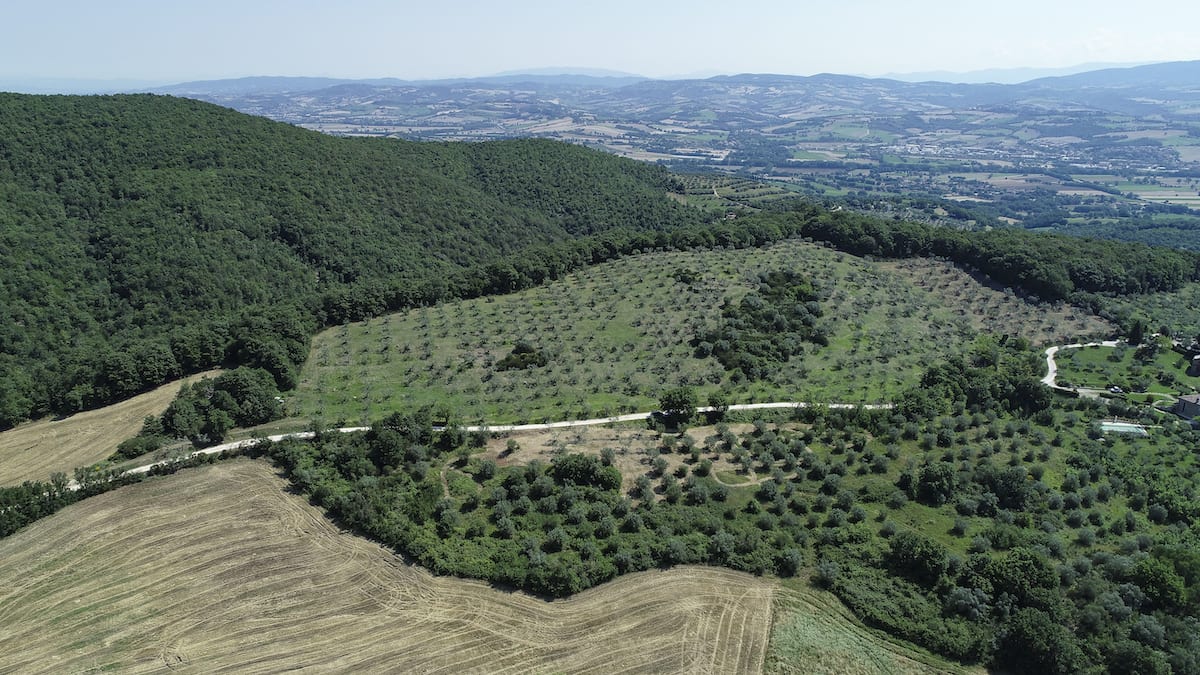 An integral part of the institute is the farm in part under organic conditions, the rest in conventional “an organizational effort, but essential to introduce students to different topics.” 75 hectares, 4 only of DOC vineyard, olus olive groves, field-catalogue of biodiversity, orchard, greenhouses, livestock, a creamery where 80 different types of cheese are produced, the honey laboratory and the breeding of bees, an experimental cellar, an experimental oil mill (which two years ago won the Pandolea prize with Gambero Rosso among technical institutes). Then there are the educational farm (over 30 environmental and food education courses followed each year by 4,000 pupils of various ages), and the social farm aimed at integrating weaker subjects and those at risk of marginalization. Here they all find a professional perspective.

It is a real farm, it’s not simulated. “Here the school-work model has existed for 160 years,” commented Santucci. The students leave the classroom and are in the orchard, cellar or greenhouse, “an open-air laboratory” he explained “so close that we adapt the theory schedule to practice: if you need to rack or thresh, lessons are moved to the next day. “Because,” he explained, “it’s important that students have a real experience of the work in their future. And understanding how a farm is successful.” Often, in agricultural institutes, the practice is outsourced due to the difficulty of management, “But it’s necessary that the students also directly follow the entrepreneurial management.” 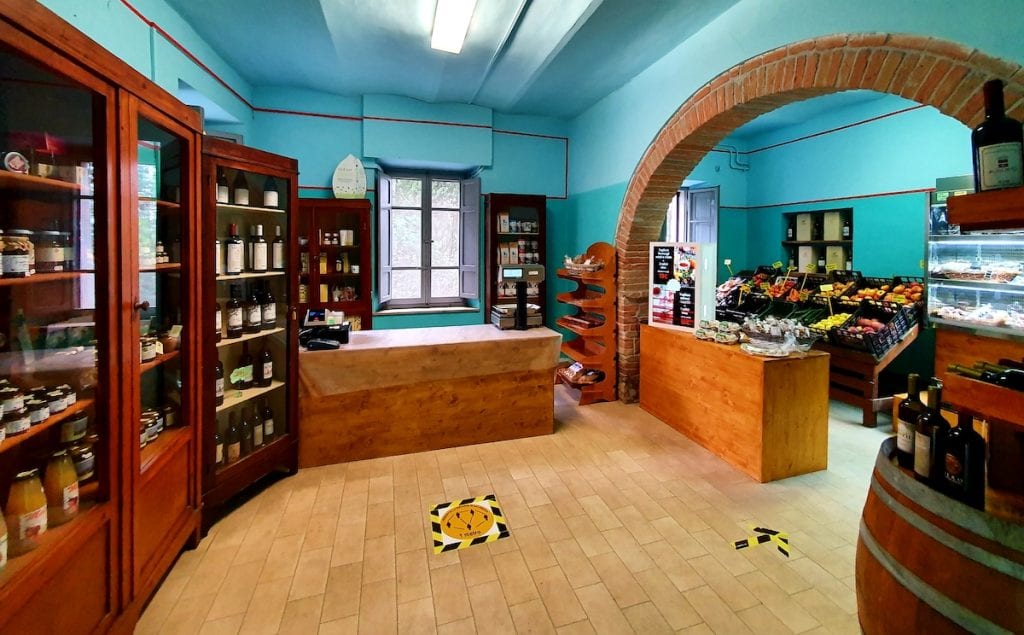 The farm, the shop and the new workshops

Even if the name is the same for the institute and the farm, the latter must be economically self-sufficient, and cannot receive help from the school but can access – like any other company – funds provided by the institutions. For example, 40% of the cellar was funded with the wine CMO and the rest with the farming proceeds. “We invoice 100,000 euros a year,” despite some of the activities, such as social ones, do not produce income.

But there is no shortage of sources of income, among others the sale of products in the on-site shop, online and through WhattsApp groups. Every Saturday food education courses illustrate one off the shelf: vegetables, fruit, cheeses, salumi, honey, wine, olive oil, jams, a hundred references from the institute or from small farms of former students to whom a showcase is offered. The pasta is from a local pasta factory that uses the school’s wheat and the same for the flours, for now milled outside. But soon things will change, because an old peasant courtyard is being restored, 800 square meters for laboratories, “It’s a project worth 1.5 million euros, more than a third destined for machinery financed by Miur, in the project territorial laboratories for employability” with a brewery, laboratory for medicinal herbs, extension of the cellar, flour mill, bakery, in order to close the cycle from wheat to table: the canteens, in fact, use the products of the farm.

The agricultural institute of Todi. The cellar

Wine is a central sector to the point that the institute is one of the promoters of the Todi land of wine association, and has expanded the school curriculum with a sixth year of specialization in oenology. Twenty labels produced, “we also work with universities and external wineries, we experiment with new products and protocols.” They were responsible for the rediscovery and rescue of the grero, a black greco grape, a variety that had disappeared in the early 1900s. “At the beginning of 2000 there was only one 120-year-old plant, in 2011 we obtained the registration of the grape in the national register, then we continued with micro-vinifications and bottling.” Also from here comes the Berit, a Mass celebration wine that saw the light in 2017 “in this project we involve young people at risk of social marginalization” he explained, and continued “Mass wine is produced according to the rules defined by the Canon Law code, and has a Vatican certification; it must not be corrupted by the hand of man, it must be a natural wine, without chemicals in the vineyard and in the cellar.” 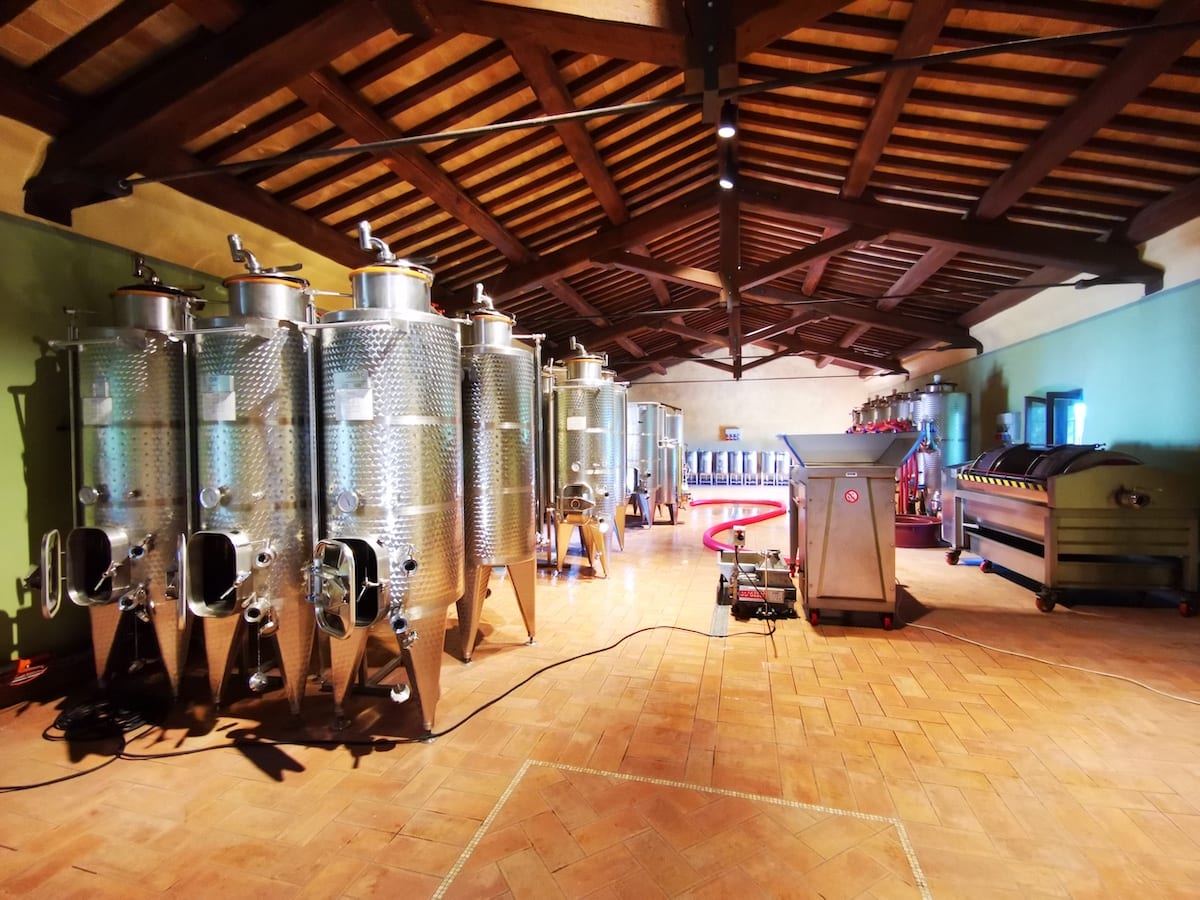 In addition to the compulsory program, the syllabus is enriched with afternoon and evening courses, also open to outsiders. Natural agriculture is one of these, then there are also olive oil tasting, vine pruning and olive tree pruning courses, as well as classes in drone flying. “Scholastic autonomy allows us to expand the educational landscape. The school district responds late to the needs of the market, we can move faster and find solutions within the ministerial directives,” he explained, “dealing with farms and ex-alumni is essential because stimuli and inputs come from these talks. The market knows the needs, which is why even a food shop is an important test: if you are in the system, you can grasp its needs and trends.”

An example is precision agriculture: “in a few years maybe we will have 5 hours in school programs, but in the meantime it’s up to teachers and schools to create workshops and initiatives to address this issue.” A theme that is close to Ciuffelli’s heart: “we were the first Italian public institute to open the precision agriculture laboratory, in 2012, and we had to go to America to find the necessary equipment. Digitalization in field work was born here about 10 years ago, also thanks to a former student who works in agricultural software.” “We like digital very much,” he added, and said that at the first sign of closure for the Covid emergency, they accelerated the choice of programs and platforms, did face-to-face simulations and during lockdown, online learning started immediately. 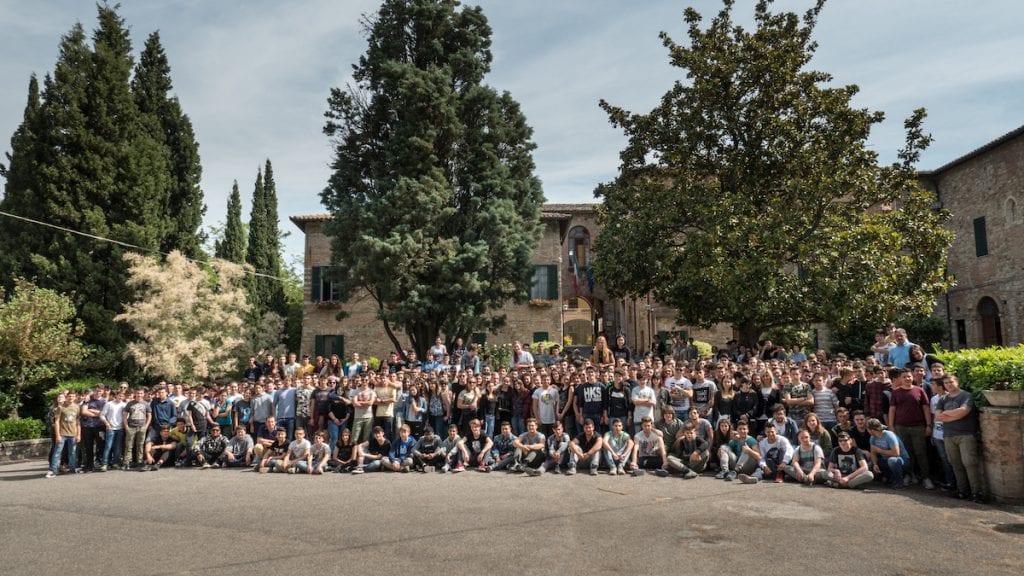 The afternoon lessons are essential especially for boarding school students, “we have a rich program of creative and playful activities for them, but around the age of 17 they begin to understand what they want to do, they see themselves projected into the productive world, they want to expand their experiences and knowledge. The courses put them in contact with agricultural entrepreneurs, take their solicitations, learn and understand the problems of doing business.” Young people and adults together? “I don’t think kids should be with kids and adults with adults: each can take from the other. I think bringing these worlds together is one of the most beautiful experiences.”

Today, 65% of the students continue their studies, the remainder in two years at the latest, find work in the agri-food sector, with an overall employment percentage of 90%. Many alumni now occupy key positions in the sector, and “if they have to recruit they turn to us, so much so that we have a hard time finding subjects for all the positions requested.” The relationship with those who attended school is alive: since 2002 the alumni association has been in “loving contact” with a six-monthly publication – Agricultural Citadel – which narrates how the school’s progress and initiatives; while a Facebook group documents in real time every novelty of the institute. A public institution. 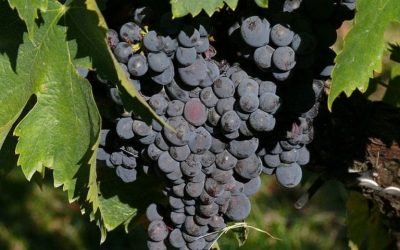 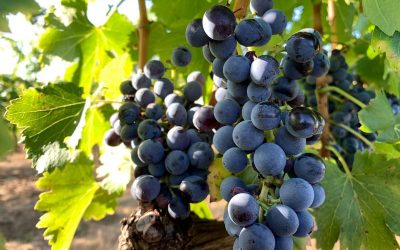 The iconic wine of Trasimeno: call out “Gamay” and Gre... 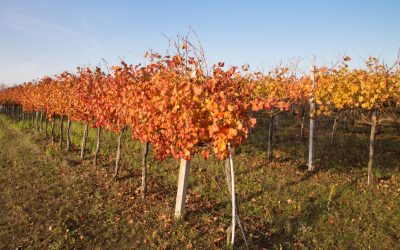 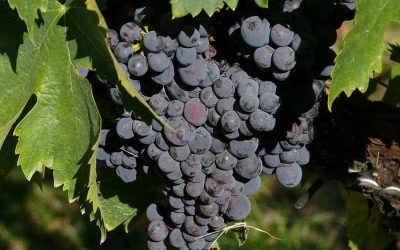