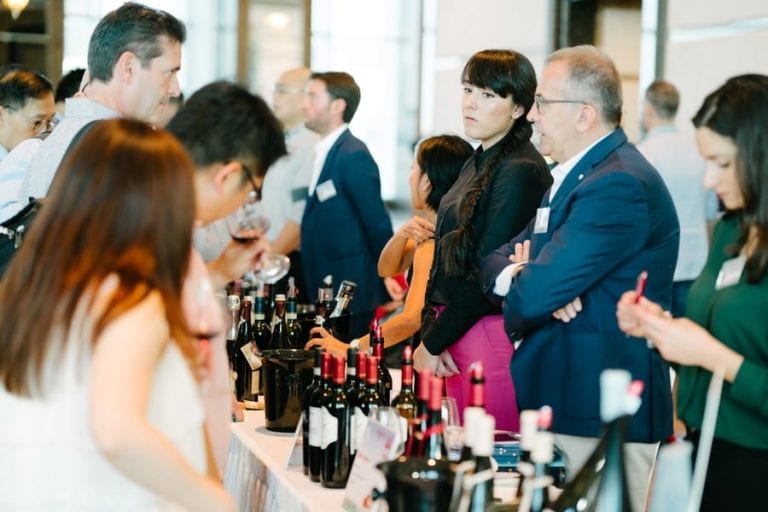 Asia: the first 3 legs of the tour. The Gambero Rosso tour in Asia is in full swing, but we can already draw a first preview of the first three stages: Tokyo, Seoul and Taipei. Three great successes.

The Asian Gambero Rosso tour took off with the Tokyo Tre Bicchieri event on October 30th. At the Ritz Carlton more than 100 producers awarded with the Tre Bicchieri recognition presented about 400 labels of top Italian wines to the Japanese public, one currently more and more attentive to the best in Italian wine-making. From noon to 6pm, over 1,200 operators of the Japanese capital took turns in the Ritz event hall discovering new wine glories and new vintages of the most classic labels. "This is a classic autumn event," confirms Keisuke Kuroda, sommelier and owner of two excellent Italian restaurants, Kurodino in Ginza and Kagurazaka, "a very important occasion to taste novelties and greet the producers with whom we already work."

The outlook for Italian wine here in Japan is positive: in recent years we have grown a lot and we permanently occupy third place after France (which occupies over 50% of the market) but very close to taking second place from the Chileans with our 1,43 billion euros in turnover, an increase of 4% on the previous year. "If we consider the devaluation of the yen over the last two years - point out to us at Tokyio's ICE-ITA - the real growth is 8%". But we are at the beginning of an even more significant season. "The Japan-EU agreement with the abatement of customs tariffs opens an even more intense exchange season between our two countries" declared Italian Ambassador Giorgio Starace in his opening speech "Wine will be among the products that will mostly benefit from the agreement: the 15% barrier on this product that is a symbol of Italian gastronomic culture, will fall, and we expect a leap forward of our export".

But the Tokyo event was not just Tre Bicchieri. During the course of the day Marco Sabellico, curator of the Vini d'Italia, and Isao Miyajima, renowned wine-expert and gourmet plus the person responsible for the translation of the Vini d’Italia guide in Japanese, led three very popular masterclasses on Custoza, on Prosecco Doc and on the Special Prizes of the 2019 guide edition. "Japanese enthusiasts have an extraordinary curiosity and great passion for Italian wine, and they want continuously deepen their knowledge" Miyajima told us, "The Guide is important, but these events and master classes are fundamental". "The markets must be presided, with presence and promotion work- echoed Luca Torri, importer and distributor of Italian wine in Japan - and Italian dining in Japan is perhaps the best outside of Italy. The tasting table of Lugana Doc is also very popular, and under the aegis of the Cossortium it offered a tasting of the wines of 21 wineries of the denomination.

Splendid weather welcomed the producers of the Top Italian Roadshow - now in its twelfth edition - who arrived in Seoul on November 1st for the event. Crowds here too, where after the opening speeches the public - over 700 people - crowded the tasting tables where over 50 companies offered their products for tastings. From 1 to 5 pm it was an orderly mingling of enthusiasts, operators and restaurateurs. "The Korean scene is positive for Italian wine- confirmed Roberto Rizzo, Deputy Head of Mission of the Italian Embassy -but we could do a lot more". The market also sees France in the lead with a third of the wine import, followed at close range by the usual Chile with 20% of the market and then the USA and Italy, which follows in close pursuit". But if in the last year Italy has grown by 9%, the Americans have recorded a +12%, while Chile is falling. "It's about promotion policies - says San Joo Choi - journalist and teaching manager of WSA Wine Academy in Seoul, connected to the English WSET which provides the certifications -"The Californian producers are very present on this market, they visit continuously, and provide educational material and wines for the courses, which then lead to specialist diplomas and certifications. All of this here is very important to us. And there isn't - so far - a specialized program of in-depth analysis on Italian wine. For Korean fans it's a serious gap. "Very real, considering all the Masterclasses held at the event by Sabellico, Ruggeri and Choi to an audience of operators. Considering how Italian restaurants and wine bars dedicated to Italian wine are growing rapidly in number around the country.

Third leg – also dedicated to the Top Italian Wines Roadshow - in Taipei on November 5. This 2018 is Gambero Rosso’s fifth presence in Taipei, and from noon until 6 pm, in the rooms of Shangri-La Far Eastern Plaza Hotel, more than 700 guests approached the tasting tables where they had the opportunity of interacting with more than 60 Italian producers. Here too, wine imports speak French. The wine market in the island once known as Formosa is in rapid expansion. In the last six years, it has recorded a steady growth rate of around 8% per year, with a turnover of $867 million in 2017, a +4% on the previous year. "We are catching up on competitors such as Spain, the United States, Australia and Chile, which until recently preceded us for quantities of imported wine- tells us Donato Scioscioli, Italian government representative in the DRC (Italy, like many other countries, does not officially recognize Taiwan and has no embassy), and Italy is starting to become the second reality, also by turnover, of enological imports".

But the battle is not just against the French. Chileans, Australians and Spanish,, thanks to the low prices, are very popular. "But we are the nation with the highest growth rate in recent years, and those with the most versatile and fascinating offer" - says Alessio Carteri, who a few years ago saw the potential of this market, and gave life with his wife Charlotte Liu to MR. 9 Import, specialized in Venetian wines but not exclusively. "Here we grow 10% and more per year, even if the starring role is of Valpolicella, Amarone and Recioto in the heart of the Taiwanese, but slowly they are also discovering whites and sparkling wines, thanks to Italian dining venues in great growth and excellent level". "The Taiwanese public has the culture and ability to spend, and especially the young generations, thanks to the economic boom, which often trained abroad, today pursuing a sophisticated lifestyle inspired by the West"- tells us Norbert Chu-chuan Yang, Minister of Foreign Affairs of the Republic, who spoke at the Gambero Rosso event. Taipei with its three million inhabitants (Taiwan counts 23 million) has a lively food scene and an incredible number of top-level restaurants, where the wine list is a must. Very crowded, as always the popular Masterclasses.

The quality of Italian dining in Tokyo is confirmed among the highest in the world for quality of ingredients and cleanliness of flavours. During the opening ceremony, the best addresses rated in our Top Italian Restaurants 2019 were awarded. The best wine bar in Tokyo Contadi Castaldi is Incanto, restaurant and wine bar with a deep and refined wine list, strong of a spectacular by-the-glass offer even of the most important labels. Among the pizzerias stands out Napoil sta' ca ' bestowed Tre Spicchi recognition, and the new entry: Pizza Bar on 38th by Daniele Cason in the Mandarin Oriental. Among the traditional cuisines, Icaro stands out, which in addition to Due Gamberi recognition, also wins the Barilla award for the incredible quality of their pasta. Finally the Tre Forchette, confirmed this year by Heinz Beck, led by Giuseppe Molaro, and Luca Fantin Restaurant. The latter, due to the attention to detail in the dish and in the dining room, the lightest smoked aromas, the delicate flavors and a notable service takes home the Taste & Design Award.

There are only about 500 Italians living in South Korea, but Italian restaurants have many virtuous examples in the capital. Awarded with Due Spicchi in the capital are Giulio Lee and His Spacca Napoli, among the best Neapolitan pizzas of Asia; and for traditional cuisine, Ciuri Ciuri by Enrico and Fiore Olivieri is confirmed. The regional character, in this case Sicilian, is proving to be increasingly successful abroad. Finally, Due Forchette go to Boccalino, restaurant of the Four Seasons in Seoul, which also takes the Surgiva Taste & Design Award for its luminous room, embellished with imported white marble, windows overlooking the skyline, and a well-interpreted quality cuisine by chef Ciro Petrone, who has lived for several years in Asia. The best Contadi Castaldi wine bar in town is instead Casa del Vino, a pioneering local, among the first in town to focus on wine served by the glass and on selected labels with great knowledge of the subject of Italy, France and the rest of the world.

In the last year thousands of restaurants closed on the island of Taiwan, but Italian dining goes against the trend and multiplies its openings. In Taipei there are 9 restaurants awarded in the Top Italian Restaurants guide. Among the pizzerias, valued at Uno Spicchio, Antico Forno and the new entry Solo Pizza Napoletana. As much as the traditional Italian cuisine, the most loved in these parts too, evaluated with Un Gambero are both Di Vino and La Mole, while at Due Gamberi is Botega del Vin and Piccola Enoteca in Zhubey City, where we found 40 Italian niche wines sold by the glass. Best Bar Contadi Castaldi in the city is Beau Bar, a sophisticated and original venue, with artfully mixed cocktails and high-profile wines. Finally, in the fine dining section, at Una Forchetta is J-Ping Café in Taichung City, and Bencotto within the Taipei Mandarin Oriental, which won the Surgiva Taste & Design Award. The Tuscan chef Iacopo Frassi brings to the table well-revisited recipes in a very elegant setting, open kitchens and cellars, and 5-star service.