From Nervesa to Canada ….and back. A vineyard designed for export 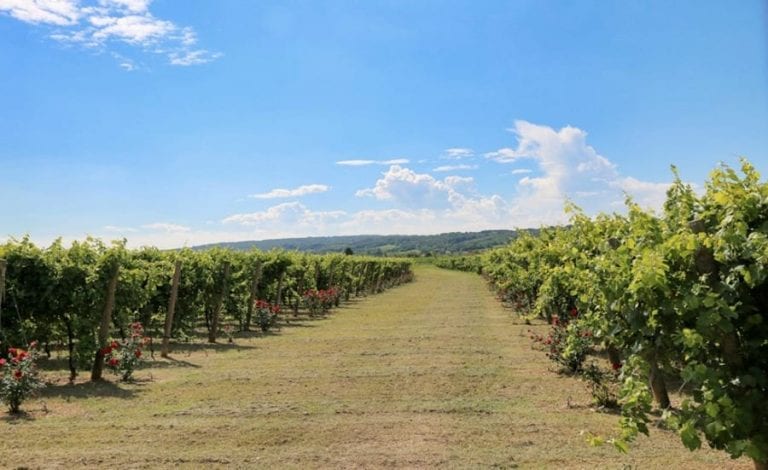 The story of Ermenegildo Giusti begins in the Colli Asolani, develops in the other side of the globe and then ends back in Montello. Between Treviso, Venice and Asolo, Giusti has improved and modernised his family's property.

Ermenegildo Giusti made his fortune in Canada, in construction. But the memory of the hills of home, the Colli Asolani, and of Montello, was too powerful, so he came back and rebuilt what had been a family property, enlarging and modernising it. Today it produces 200,000 bottles of wine. He sells 80% abroad, in Europe, the United States and Canada, as well as in Asia.

“I used to ask my mother where Canada was, and she always answered me in the same way. ‘Canada? At the end of the vineyard, a little farther...'”. That’s how entrepreneur and builder Ermenegildo Giusti’s story begins. Today he heads Giusti Wine, which, purchase by purchase, now holds about 80 hectares in Nervesa della Battaglia, in the eastern Veneto, between Treviso, Venice and Asolo. Ermengildo’s is a success story that began in the Veneto, crossed the Atlantic, and returned to the same land, to enrich it. “My parents were simple farmers. Everybody today sees Treviso as it became thanks to the boom in the 1960s and 1970s. But they forget what it was like after the First and Second World War. Everything here was destroyed. In 1950, it was Italy’s poorest province. Whoever could, left to look for work elsewhere.”

The bond with the land

The impulse to leave became urgent for Ermenegildo when he reached seventeen. “I couldn’t see myself shut up in a factory. I heard my grandfather’s brother talk about Canada, where he had emigrated years before. In my boy’s mind, he was a strong man, not just a simple peasant, but someone who had made a fortune with his own hands”. For migrants, the beginning is not easy and at times the difficulties seemed insurmountable, but with a boundless supply of heart, brains and passion, Giusti found that things began to get better. “We wanted to build the most beautiful, sturdy houses, the kind where we ourselves would want to live. With this attitude, the problems we faced were just part of our success.” But his strong feelings for the Veneto brought Ermenegildo back to the hills of Montello. “Wine is part of my personal story. As soon as I returned, I began to rebuild the family property,” he explained. “One of the holdings that means the most to me is Tenuta Abbazia. For centuries it was the property of the Collalto noble family. It lies on the hills where Giovanni Della Casa wrote Il Galateo, an influential book of manners published in the 16thcentury. We restored an ancient hermitage dedicated to Saint Jerome. In June, 1918, the fulcrum of the Italian defense of the Piave River was here, a concentrate of history and legend.” The waters of the Piave flow near the vineyards, through a flood plain that is poor in nutrients, forcing the vines to work themselves deeper. Farther up the hill, the soils diversify, temperature excursions between night and day increase, and the woods preserve more biodiversity than the plains below. Ermengildo continued, “We grow our indigenous varieties, such as glera and recantina, but we don’t forget the Bordeaux types that have been part of Treviso’s grape heritage for a century: cabernet sauvignon, cabernet franc and merlot. On the hillsides, we also grow pinot nero and chardonnay. in the Piave valley, we cultivate pinot grigio. Moreover, in Valpolicella, we manage two vineyards – in the Classic zone and in Val d’Illasi – where we produce an Amarone and a Ripasso.”

Restoring the artistic treasures of Montello

Quality viticulture, sensitive to the environment and to sustainability reflect Giusti’s love for this land. But since his return to Montello, Giusti also launched a project to rescue and restore the historic and artistic treasures of the landscape. “I consider it a privilege and a duty to commit myself to the community. It is a way to share success, to give more value to work.” He therefore is devoting himself to the restoration of the Abbey of Saint Eustace. “The ruins of the abbey date back to 900 A.D. We decided to donate about two million euros to the local community to protect it. The Abbey has been in ruins for about a century. Even the hermitage of the patron saint, Jerome, was abandoned. We stepped in, securing the ruins and restoring the hermitage. Now, with another initiative, we will make what’s left of the Abbey accessible”.

“Our present production is over 200,000 bottles, 80% of which is destined for international markets”, explained Sebastiano Bonomo, young export manager for Giusti Wine. “Our markets are those which are well-consolidated for Italian wine, above all in North America, where we have received recognition in international competitions. We have an important position in the Canadian provinces, which for us is an important test, since there we are up against all the great international wine names. We’re growing rapidly in Europe, in Great Britain and the up-coming Eastern European countries. We’re present in Hong Kong and China where we’re seeing significant growth. We’re trying to move along two tracks, cultivating traditional markets and at the same time sounding out emerging, young ones where the appeal of Italian products is often overlooked by the big players because the markets are seen as …too small”. Among the best-selling labels abroad is obviously Prosecco and the great Veronese reds. “Yes, those are the labels that open the way for our iconic wine, Umberto I, and for our Chardonnay and Pinot Grigio”.

What is the future of Giusti Wine? “By the end of 2017, we will have about 100 hectares of vineyard in production. On our Tenuta Sienna property, we’ll build a new winemaking facility, digging eight meters under the surface, beneath the vineyards. The marvelous landscape of Montello will not be spoiled by new construction, and visually, this will just be a new vineyard. It’s a beautiful and ambitious project, and will be perhaps the most extraordinary in the Veneto”.

“I love all my wines, but the one I’m proudest of is Umberto I. It originates in Tenuta Abbazia”, Ermenegildo told us, “a classic Bordeaux blend from fully mature vines. It is a true cru, and the wine that I dedicated to my grandfather”. Umberto I is the firm’s premium wine, made from a careful selection of merlot and cabernet sauvignon grapes. Long aging in the cellar gives depth to aromas that range from ripe red fruit to spices, then makes room for fresher vegetal notes to emerge. On the palate, richness is held in check by tannin that is both silky and assertive at the same time.

This Asolo Extra Dry has a completely different profile. It is a Prosecco Spumante that is striking for the elegance of its aromas. To the taste, it shows excellent harmony between sweetness, acidity and sparkle.

Too often in the Veneto, pinot grigio is a variety interpreted without verve. Instead, Giusti showcases it at its best. The grapes come from Tenuta Rolando, at the foot of Montello. On the nose, a clean fruity expression of pear and apple envelops the palate with richness and elegance. Entirely aged in stainless steel, Longheri displays impressive sapidity and tautness in the mouth.