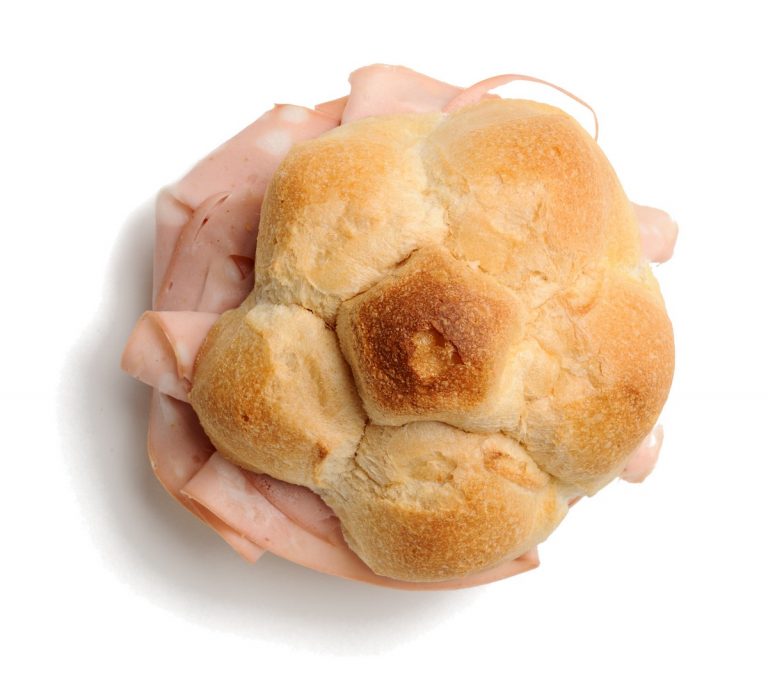 It's easy to say sandwich: there are many traditional Italian recipes, each with its own story. Here are the sandwiches to try at least once.

History and origin of the sandwich

Bread and filling. Nothing more ancient, practical, substantial, good. The tradition of stuffing slices of bread dates back to the mists of time. Greek philosopher Diogenes of Sinope is often described in the act of eating lentils in a hollowed piece of bread. The sandwich, however, seems to have taken hold more massively in Rome: the name of via Panisperna derives from the Latin phrase panis ac perna, bread and ham, a very popular snack at the time, consisting of a loaf of bread made with wine must, ham and dried figs. A tasty, simple and nutritious food. Taking a long time jump, we arrive at 1760: the sandwich arrives in England, a sandwich with illustrious origins. It was invented by Lord John Montague, 4th Earl of Sandwich, who asked his servants to put his dinner, roast beef, between two slices of buttered bread. Gossip has it that he was an inveterate gambler and for this reason he did not want to leave the card game to eat at the table. Not something bad, considering he created the ancestor of the sandwich.

The regional variations of the sandwich

Over time, however, sandwiches have developed, taken shape and many variations have come about, in Italy and around the world. Here are the most famous Italian regional sandwiches. 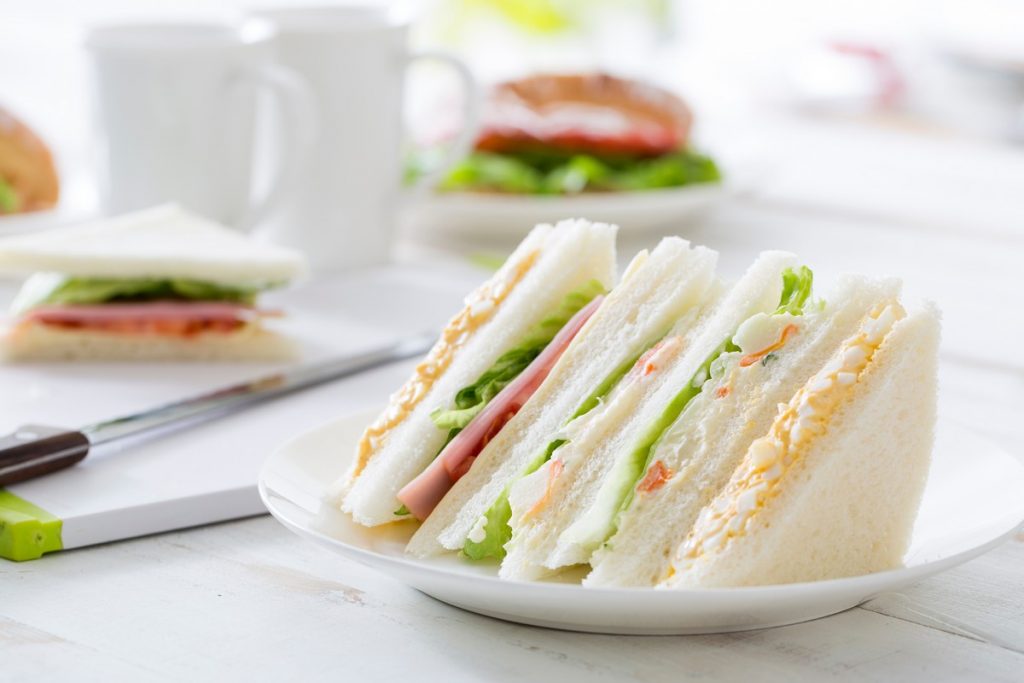 Similar to the British finger sandwich, the tramezzino was born at the historic café Mulassano, under the porticoes of Piazza Castello, in the heart of Turin, where a plaquestill reads: "In this place in 1926, Signora Angela Demichelis Nebiolo invented the tramezzino." The Turin native who left for America at the beginning of the twentieth century, Demichelis found a husband (also from Piedmont) in Detroit, before returning home in 1925, with the plan of running an eatery with her family. She thus purchased a coffee bar from Amilcare Mulassano, owner of the Sacco Distillery famous for their mint syrup. Here she introduced various novelties, starting with a toaster machine. Her lucky intuition came a few years later, when she decided not to toast soft bread and just stuff it with good ingredients, originally butter and anchovies. The name was invented by none other than poet Gabriele D'Annunzio, who was inspired by the partitions of the country house, in Italian "tramezzi" to indicate something to eat "in between meals," between breakfast and lunch. To prepare really good ones at home, pay attention to the type of bread: the best is the soft and moist white kind. For those wishing to have fun, here are some tips for making excellent tramezzini at home. 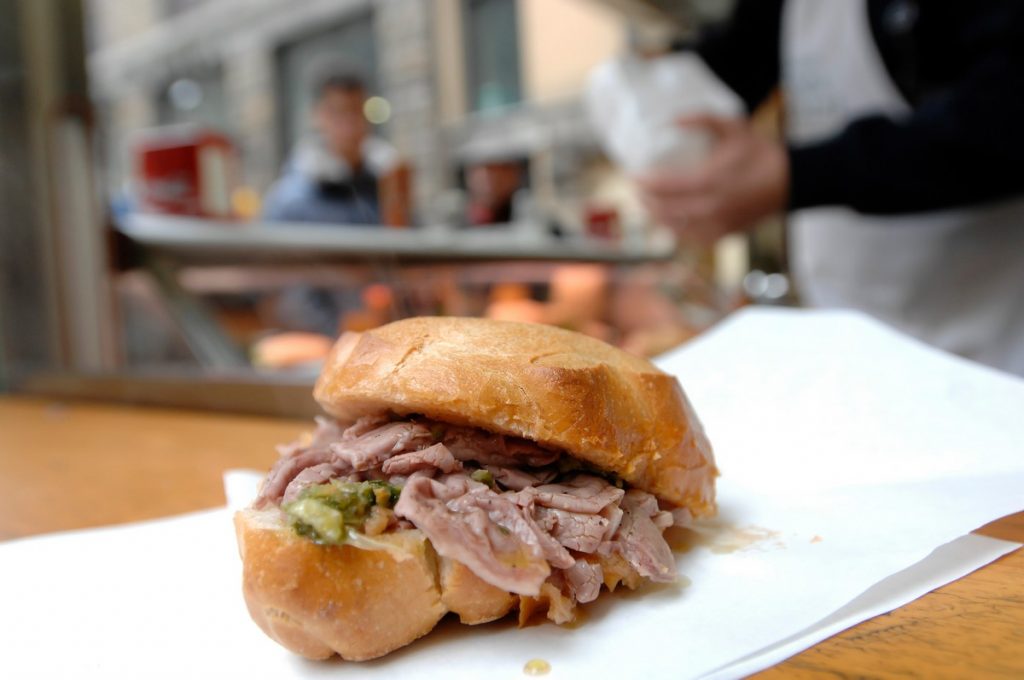 If there is one thing that Florentines know how to do well, it is bringing back to fame the recipes of the humble, popular tradition. Like that of lampredotto, one of the four stomachs of the bovine (the abomasum), that is boiled and cut at the moment and eaten together with a bun soaked in the broth. And so the typical metallic chopping of the knife blades of every self-respecting tripe seller has entered the gastronomic myth of Florence, conquering everyone. Kiosks of the lampredottai are revered by Florentines as institutions, custodians of ancient practices for the optimal preparation of a specific cut of the stomach, which is characterised by the purplish colour of the gala, the thinnest part of the abomasum, furrowed by closely spaced crests. Boiled for a long time together with the fattest and softest part, it allows to obtain a balanced and intense taste; the perfect bread for this sandwich? Semellino, traditional round bun that's increasingly rare to find. 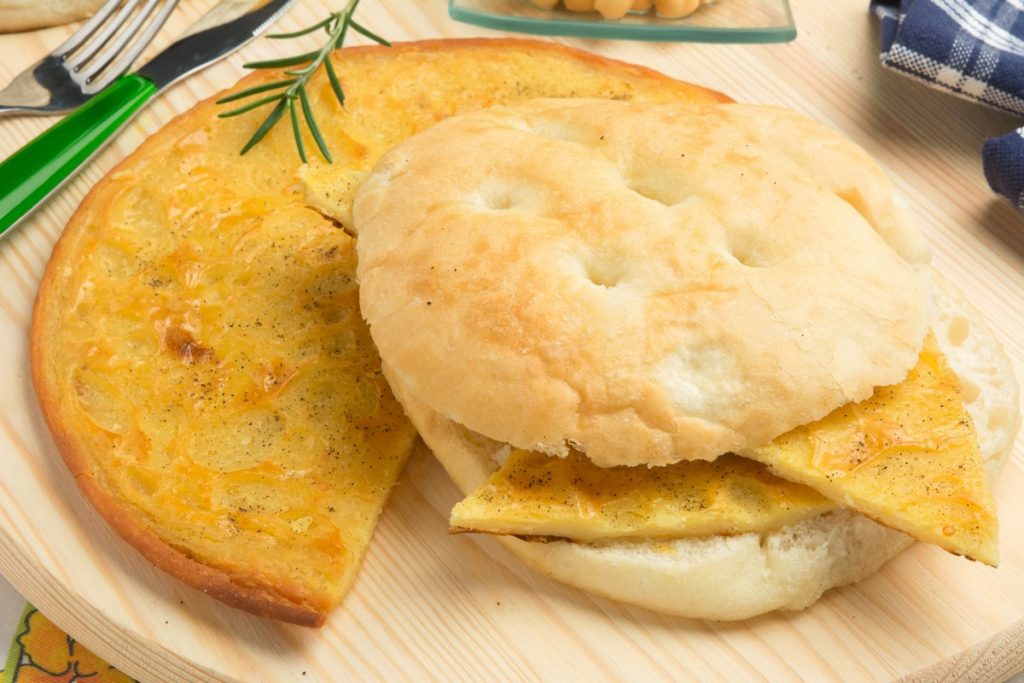 In Livorno, farinata takes the name of chickpea "torta", aka 5 and 5. Five cents (of old lira) for the bread and five cents for the torta stuffed in the sandwich. Today "5 e 5" is part of the traditional products of the Livorno cuisine and is sold by specialised shopkeepers, the tortai, but also in pizzerias sold by the slice and other various street food places. Legend has it that it was a battle between Genoa and Pisa in 1284 (known as the Battle of Meloria) that generated the necessary conditions for the recipe for farinata to be developed, thanks to an unfortunate event: a terrible storm during which, in a Genoese galley, a few barrels of oil and sacks of chickpeas overturned, soaking themselves in salty water. The sailors tried to recover the provisions, putting everything in a container which, left in the sun, dried the mixture, which was still very tasty. 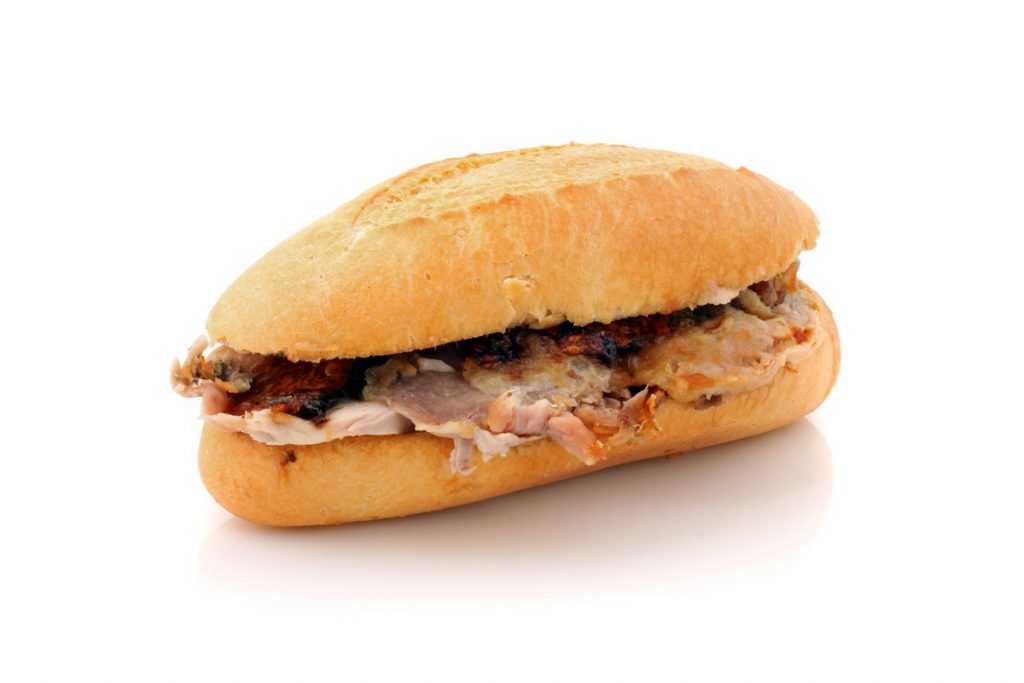 The most coveted by gourmands and lovers of tradition, a symbol of village festivals and celebrations: it is the king of sandwiches, a panino sandwich stuffed with porchetta, widespread especially in Central Italy, in particular Lazio and Umbria. The most famous, spicy and tasty porchetta is native to Ariccia, the historical epicentre of production of this pork butchery specialty. A product with ancient history, dating back to before ancient Rome: in 1950 the porchettari dei Castelli, led by the mayor of Ariccia Ovidio Cioli, created the first porchetta festival, still today a very popular food festival in the area. For the perfect sandwich, here is the ranking of the best porchetta from Castelli Romani. 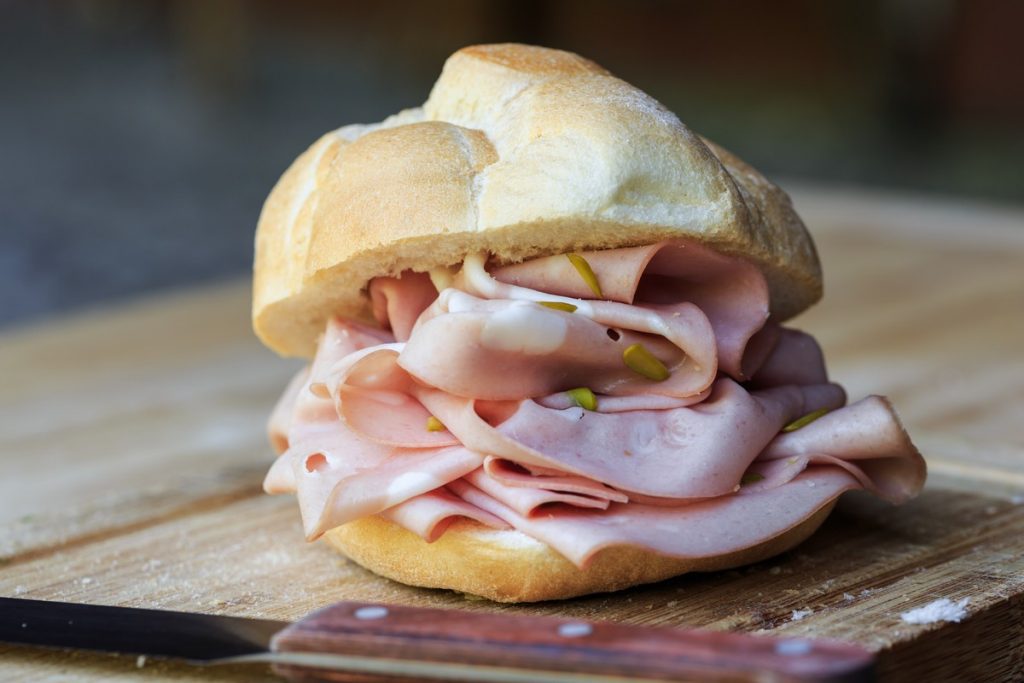 A timeless classic, perfect for a packed lunch but also an ideal snack at any time of day: few recipes can satisfy the palate like a sandwich filled with mortadella. A favourite meat for many, mortadella was officially born in 1661, the year in which Cardinal Farnese began to regulate its production with an edict. The name derives from murtatum, the mortar used in Roman times to grind meat, while a first version of the current mortadella could be what's known as farcinem in saccatum, pork sausage flavoured with myrtle berries, also mentioned by Pliny the Elder. The first forms of mortadella, however, were already found in the Etruscan period, and then again in the Middle Ages, when the meat was closed with a wax seal. An even more delicious variant of the classic sandwich is the combination with plain pizza flatbread: pizza e mortazza, an institution in the nation's capital.

At Neapolitan tables there is a fight to grab the cuzzetiello, the final part of the peasant loaf of bread, to be dipped in the ragù that's left to simmer "pippìare" on the stove. Childhood memories that can be re-lived for several years now thanks to street food stalls and kiosks that have revived the tradition by creating a unique sandwich of its kind. Stuffed, of course, with typical sauces: ragù, meatballs with sauce, eggplant parmigiana, escarole and olives and all the best of Neapolitan cuisine. The use of peasant bread, naturally leavened and baked in a wood-fired oven, with a thick and crunchy crust, is essential. 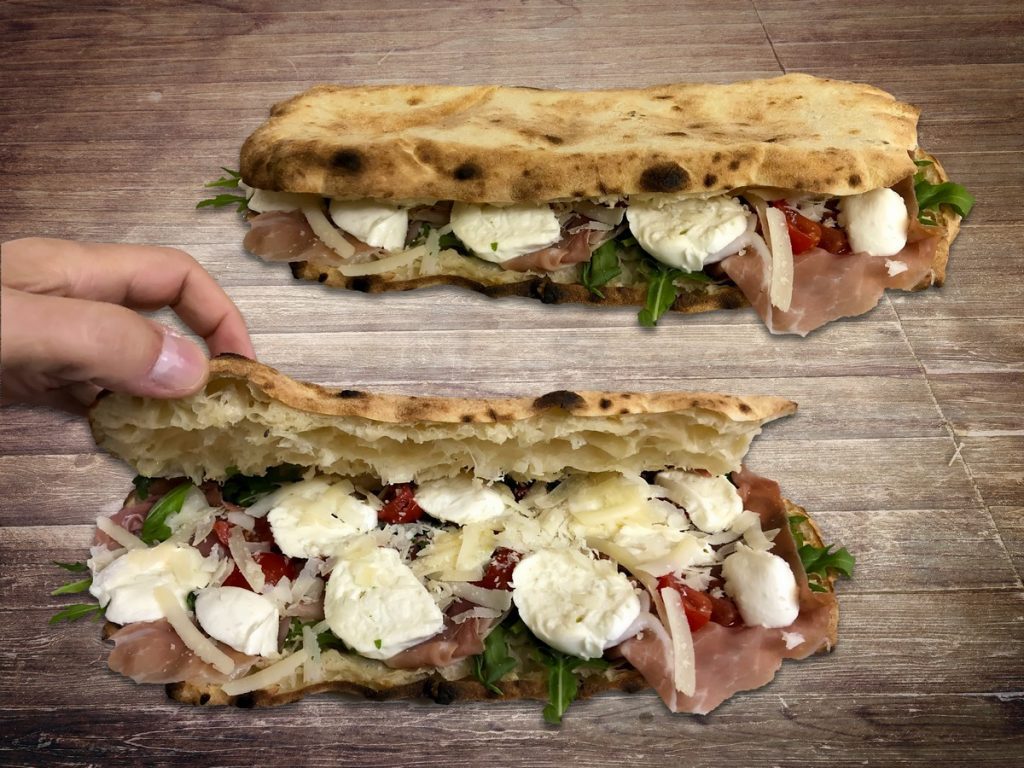 Typical of the Lattari Mountains, panuozzo is an elongated sandwich made with pizza dough, sliced open horizontally and then stuffed. Mozzarella and tomatoes; grilled vegetables and scamorza cheese; cured meats, anchovies, sardines, sausage and broccoli, provolone and mushrooms: there are many variations for the fillings, stuffed at the moment before quickly heating the sandwich in the oven. A product born in 1983 thanks to Giuseppe Mascolo, owner of a pizzeria in Gragnano who created this narrow and long loaf as an alternative to pizza for his children, filling it with pancetta and mozzarella. His daughter Pasqualina fell in love with it at the first bite and then added it to the menu, renaming it o' panuozzo. 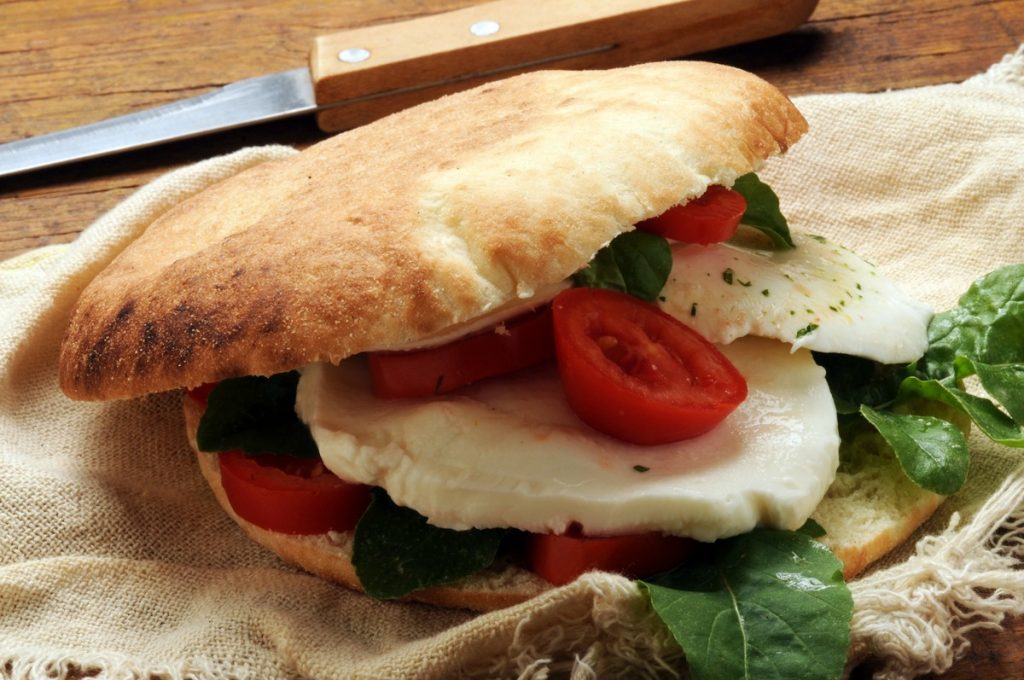 Typical of the provinces of Lecce and Taranto, puccia is a round bread roll baked in a wood-fired oven, sliced open and stuffed with different ingredients. A typical variant of Gallipoli (Lecce) is puccia caddhipulina, prepared for the eve of the feast of the Immaculate Conception, on December 7th: a soft and thick dough that's seasoned with capers and salted anchovies. Also famous is puccia uliata from Salento, enriched with black olives soaked in brine, with a smaller and more regular shape. According to legend, the name derives from bucellatum, the bread that the Roman legionaries ate during their expansion campaigns, because it kept for a long time. 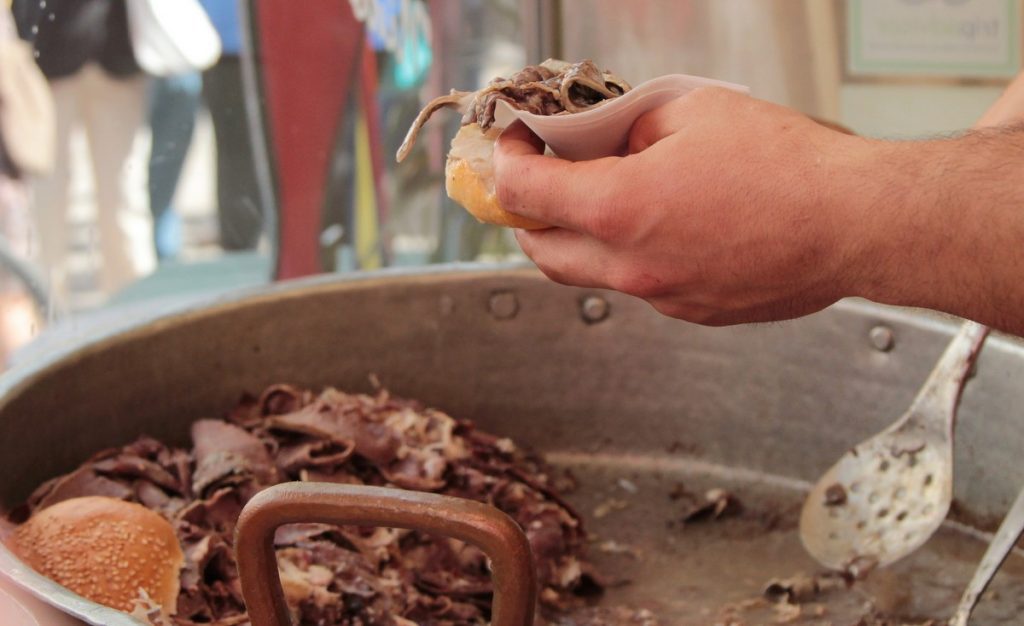 Among the many street food protagonists of the Palermo food scene, the kiosks of pani ca' meusa undoubtedly stand out, in the schietta (plain) or maritata version (with caciocavallo and ricotta). These are sandwiches stuffed with spleen, a recipe of humble origins born from the habit of butchers of Jewish origin, who kept the entrails of the veal for them as a reward. All except the liver, which was considered more valuable: so, they put lung, spleen and pieces of cartilage in a sandwich, adding ricotta or other cheeses when available. 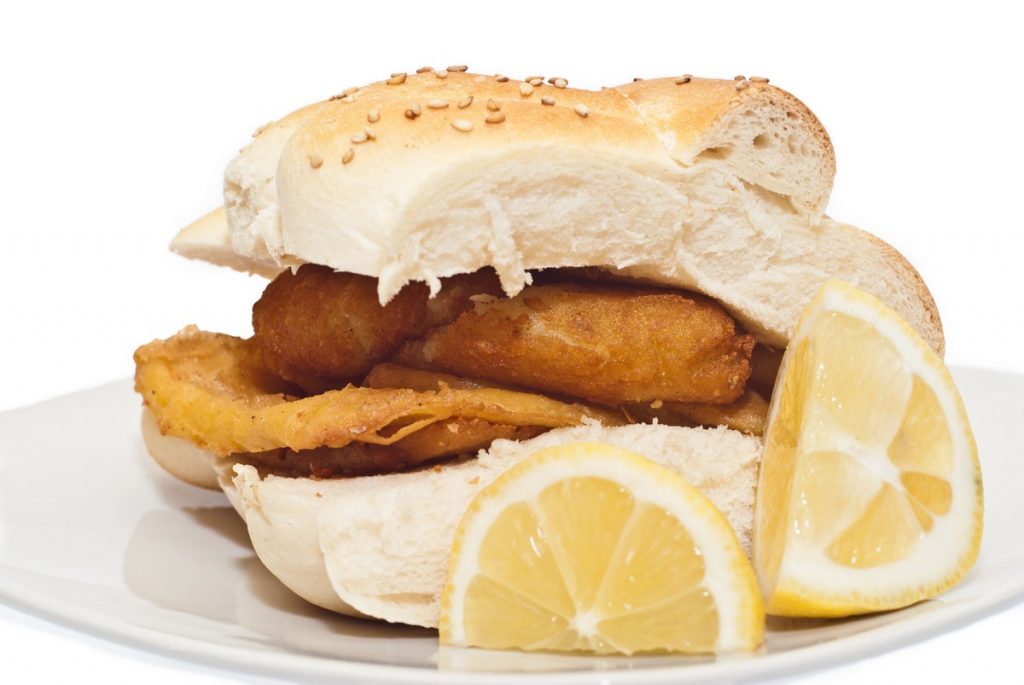 Another must-taste street food to try when on holiday in Palermo is pane e panelle, a sandwich filled with small pancakes made with chickpea flour. A specialty already known by the Arabs during the domination of the island, although at the time it was more of a soft dough of flour and water cooked over the fire. Panelle as we know them today are born out of necessity, to feed the people in difficult times with very few ingredients. This is a fried variant of farinata, smaller and usually sandwiched in a soft sesame bun, with just a squeeze of lemon.

Sift the flour into a bowl and, using a whisk, beat it with a litre of cold water. Dissolve the lumps well and pour the mixture into a heavy-bottomed saucepan. Add a good pinch of salt and put the saucepan on the stove, adjusting the flame to medium heat. Stirring constantly with a wooden spoon, bring to a boil and continue cooking the obtained polenta for about twenty minutes until it has the density of a cream. Stir without interruption because the mixture sticks easily and, at the end, add a tablespoon of chopped parsley. Grease a marble table or an oven plate with a little olive oil and pour the polenta. Flatten it immediately with a spatula to a thickness of just one centimetre and let it cool. Once cold it will become compact and consistent and will come off the shiny surface easily: cut it into squares or small lozenges and fry it in plenty of very hot olive oil (175°C) until the panelle are lightly browned. Drain, blot on a double sheet of kitchen paper and serve very hot stuffed in soft sesame rolls.