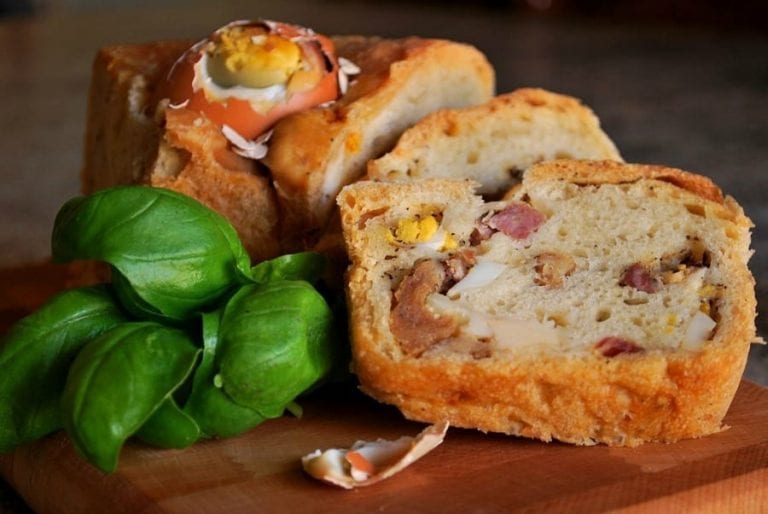 Colomba, chocolate eggs, pastiera: the sweet Easter recipes of Italy are many and amazing, but on Italian tables on Easter Sunday there is also a multitude of typically regional delights.

In terms of Italian traditional cookery during the Easter holidays, the immediate association is “colomba”. But there is a wide range of savoury foods typical of this time of year: they vary according to region, and almost always contain eggs and cheese, which are symbolic of this festivity. Perfect for Easter Sunday breakfast, these savoury dishes can also become an ideal picnic food on picnic day par excellance, Pasquetta. In addition to savoury rustic pies and terrines, there are also dishes made with symbolic ingredients like eggs, lamb, offal. We have listed the easiest recipes, perfect for a garden meal or ideala s an Easter gift.

Known mnostly for its sweet version, casadina from Sardinia also is made in a savoury version mostly baked in the Nuoro part of the island, and where it talkes the name casadina salìa. Commonly served as an appetizer, it is a tapioca dough basket filled with ricotta and other cheese, flavoured with mint and parsley. Every part of Sardinia declines the dish differently, adding in turn, wild asparagus, Swiss chard, fennel pollen, artichokes. The dough is always made with tapioca flour and lard, the filling is almost always ricotta or other soft fresh cheeses. This is an ancient recipe that originates in classic Greek cheese pastries. The filling in the oldest sweet version is added with citrus zest and saffron.

Seventeenth century casatiello is a typical rustic bread typical of the region of which Naples is capital. The folk tale, La gatta cenerentola by Giambattista Basile, describes the king’s table including it.In the text, there’s mention of two important dishes of the local Easter tradition, pastieraand casatiello, both typical of the Naples Easter meal. Leavened bread dough studded with cheese and cured meats that’s baked in the oven with whole eggs in their shell placed on the surface: casatiello contains all the elements of spring – cheese and eggs – and includes them in a fluffy baked ring loaf. Similar but not identical is tortano, in which the eggs are placed differently, which are not whole on the surface, rather chard boiled and chopped in the dough along with cheese and salami.

Also called casciatelle, sciarone or fiarone, but most commonly fiadoni, these rustic calzones are typical of central Italy. The pockets are filled with semi-aged sheep’s milk and dried sausage. They are eaten mostly in Molise, but they are equally made in the regions of Abruzzo and the Marche, where they are known as piconi. They are available year round in bakeries but they take the starring role during the Easter period. The origin of fiadoni date back to the time of Cristoforodi Messisbugo, steward of the House of Este in Ferrara and an Italian cook of the Renaissance. The recipe was born in Emilia-Romagna, and then travels to Abruzzo and finally to Molise, where it is still to this day one of the region’s most representative dish.

The impanata is a particular type of focaccia that’s popular in Sicily, and owes its origin to the Spanish rule of the island, especially in the Ragusa area. This succulent recipe is made in many variations and is mostly made during the Easter festivities. The base of the dish is bread dough that’s filled differently according to the time of year: at Easter stewed lambi s the star filling. All over Italy this meat is commonly associated to the Resurrection of Christ. The traditional recipe calls for the meat to be paired with tomato preserve flavoured with chives. As per usual, each town and city adds local ingredients to this base.

Another Campania preparation is the “rustic Neapolitan pie”, which mixes sweet and savoury. A sweet pastry crust is filled with ricotta, grated Parmigiano. Ham. Salami and aged provolone cheese. In recent years the sweet crust has been replaced with brisee pastry or puff pastry. The origin of this dish is ancient, dating back to the aristocratic Bourbon court, as described at the end of the Eighteenth century by philosopher and gastronome Vincenzo Corrado. The recipe was part of the entrees along with terrines and sartù (a timballo of seasoned rice typical of this area) which inaugurated the festivity banquets. The modern version of this dish as we know it now appears for the first time in the volume, Cucina teorico praticaby Ippolito Cavalcanti, published in Naples in 1837.

This is a kind of panettone, that is a leavened, soft and savoury bread typical of central Italy, in particular Umbria, Marche and Tuscany: known as torta (or crescia) al formaggio. A thick bread that’s also made in different variations, usually paired with cured meats and salami. Parmigiano and pecorino are also always added to the dough, but many other cheeses are added, from soft to more aged ones, accoridng to personal taste, area and its local tradition. This is a peasant bread that’s commonly eaten for Easter Sunday breakfast along with hard boiled eggs, capocollo and other cured meats.

Particular to the region of Liguria, specifically to Genova, torta Pasqualinais a local classic that celebrates the arrival of spring. The two main ingredients are eggs and cheese. In the past these foods were consumed only on special occasions. Mixed along with Swiss chard, spinach and other wild garden greens with ricotta the cheese and eggs compose the filling of the typically thin crust. This dish is strongly linked to lithurgy: legend has it that in the past homemakers layered 33 sheets of rolled out dough as a homage to the age of Christ. The earliest testimony of this dish dates back to the Fifteenth century, when it was known as “gattafura”. Nowadays it is one of the Easter Sunday meal musts, and – mostly – part of the picnic hamper on the day after, Pasquetta.

Again in Ragusa we find turciniuna, involtini of lamb intesting wrapped in more innards and seasoned with local cacio ragusano cheese. In the past these were eaten on the day before Easter Sunday after the bell toll announcing the end of the Lent fast. After the period of 40 days of fasting infact, people were finally allowed to “cammarare”, eat meat and fats again. Nowadays, the tradition continues, locals eat them on Good Saturday for lunch.