Fettuccine Alfredo. How to make it and who invented the dish 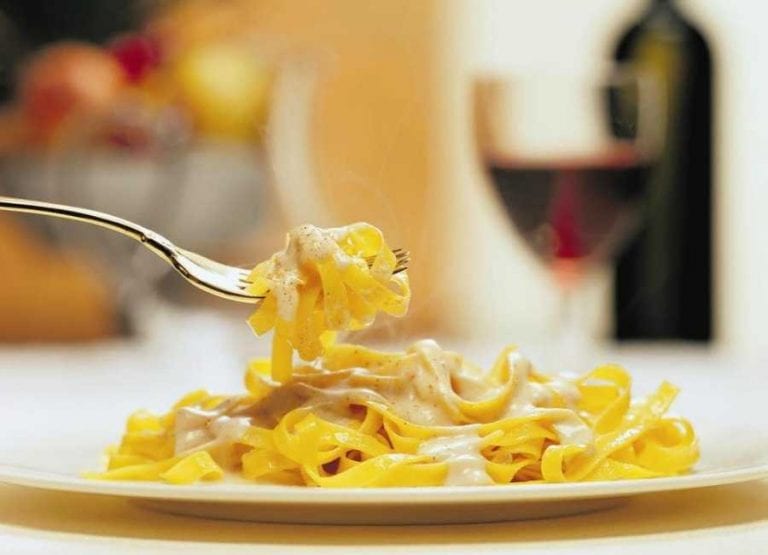 Abroad, this is an iconic Italian cuisine preparation. It comes with anecdotes of a distant celebrity past, the contours of myth, even a set of golden silverware. And history which dates back to the turn of the 20th century.

The recipe is super easy: tagliatelle mixed with butter and grated Parmigiano Reggiano. Competing for the dish’s paternity are two Rome restaurants: Alfredo alla Scrofa and Il Vero Alfredo all’Augusteo. If quizzed on which between the two is the true creator of the famous recipe and who the imposter, there is no definitive answer. One thing is sure, though – Italians should be very proud of this representative Italian cuisine recipe that’s loved half across the globe, plus is easy to make and delicious.

Restaurant Alfredo alla Scrofa opened in 1907 as an inn serving food. Alfredo began working here and inventing dishes and recipes, bringing the place to fame. In order to solve a health issue with Alfredo’s pregnant wife, the chef invented the famous Fettuccine Alfredo, which healed her lack of appetite. The dish ended up in the menu and the rest is history. Soon after the restaurant became world famous, with guests the likes of Mary Pickford and Douglas Fairbanks. The silent movie stars bestowed Alfredo and the restaurant a set of gold plated serving flatware. In 1948 Alfredo sold the restaurant and all the goods contained in it to the Mozzetti family which still manages it to this day. “Over time we have tried to export our restaurant’s history worldwide also thanks to franchising” explains Matteo Mozzetti. “This is probably why at Alfredo alla Scrofa there are more foreign customers. They are far from unprepared: they are informed on ingredients used and are no longer willing to spend excessively. The only exception are clients coming from nations with higher development and consumer interest rates, like Russia”. It’s surprising to know that there is also an “important and enduring Italian clientele”. Equally enduring is the hundred year-old recipe for the famous Fettuccine Alfredo.

Ines Di Lelio of Alfredo all’Augusteo tells her side of the story: “My grandfather Alfredo Di Lelio started working in his mother Angelina’s tavern in Piazza Rosa since he was a young boy, but he invents his fettuccine only in 1908. The dish risen to fame worldwide were a natural restorative mix of butter and Parmigiano for his wife Ines, worn out after childbirth”. The fettuccine dish became a family favorite before ever enjoying the worldwide success that brought Alfredo Di Lelio to popular acclaim. In 1914 he opened the restaurant in via della Scrofa, and then ceded the business after WWII (and up to this point the versions match). Alfredo’s absence from the dining scene was however temporary. In 1950 with his son Armando he opened the restaurant Il Vero Alfredo in Piazza Augusto Imperatore. With the opening of the new business, Alfredo gained huge success with clients in the years of La Dolce Vita. That same success is still enjoyed by the current management, the restaurant still attracts a constant stream of tourists from all over the work, attracted there to taste the famous double-butter fettuccine all’Alfredo (double butter meaning melted butter is added before and after the pasta is mixed in the dish). The ingredients need to be mixed at the table and served with the famed gold-plated serving spoon and fork engraved with the phrase, To Alfredo the king of the noodles, bestowed to his grandfather in by Douglas Fairbanks and Mary Pickford (here is the discord between the two versions). “It is precisely for this incredible story that I wish to clarify that other ‘Alfredo’ restaurants in Rome do not belong to our family tradition. Our restaurant is inscribed in the Historic Shops of the City of Rome register”. The point of contention seems to lie in those gold plated servers. And the paternity of a recipe created by a person in a restaurant which at one point in time divided their journey.

The origins of the recipe

This is however a whole other issue: understanding why a dish made with butter is (mostly) known abroad as being Italian, more specifically, Roman. The answer dates back to the XV Century. And precisely when Maestro Martino da Como wrote his “Libro de Arte Coquinaria”, considered a cornerstone of Italy’s culinary literature. The book marks the passage from Medieval cookery to Renaissance cuisine. It is effectively a recipe book, in the modern sense of the term, with recipes divided according to ingredients and method. Martino, who trained in Lombardy at the court of Francesco Sforza, and in Rome at the service of the Patriarch of Aquileia, expressed interregional gastronomic knowledge. That’s why in his recipe for maccaroni romaneschi, meaning tagliatelle – whose instructions for making these read: “Take beautiful flour and knead it to form a dough that is fattier than the one needed for lasagne, and wrap it around a staff. Release the wrapped dough and cut it in strips one fingertip wide, thus obtaining long stringy strips” – these are added with aged cheese and butter. The use of butter was common in southern Italy at the time with wealthier families who wished to stand out from the less affluent who used locally produced olive oil instead. Tagliatelle with butter and Parmigiano are therefore to be considered Italian, and specifically Roman. They have been Roman longer than carbonara and amatriciana have (their first appearances date back respecyively to 1930 and 1790), which in a sense are quintessential representatives of Roman cuisine. There is one thing which still confuses: why is this dish ubiquitous in the United States, and – save for the two restaurants mentioned above – almost extinct in Italy? Merit for the dish’s popularity in America may exclusively be credited to Mary and Douglas, both in love with the recipe, divulged its popularity in their Hollywood entourage.