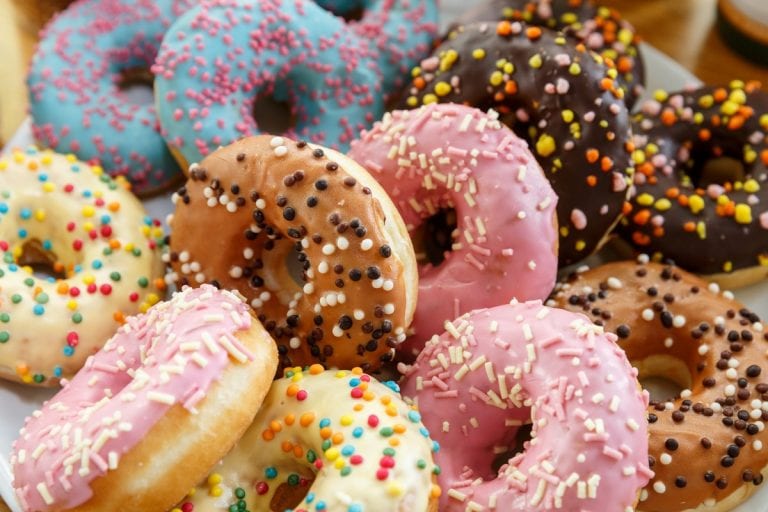 From artisanal to industrial production, by way of legends and folktales: here's all there is to know about the legendary American donuts.

Glazed, colourful, covered with sprinkles, plump and filled with cream, dusted with icing sugar, filled in the most different ways: delicious and inviting, donuts (aka doughnuts) are one of the most famous American desserts in the world, fried donuts with a melt-in-your-mouth and yielding dough, enriched with different ingredients. For fans of the hit animated sitcom “The Simpsons” these sweet rings will always be “Homer’s donuts,” for passionate travellers the association with the Dunkin’ brand or the unmistakable green and red Krispy Kreme sign is immediate, but the history of these pastries has much older origins, still partly shrouded in mystery.

What is certain is that the first written record dates back to 1809 and is found in the book “History of New York,” by Washington Irving, which speaks of “balls of batter fried in fat and called donuts or olykoeks.” The reason is obvious: oly koeks (or olykoecks) are soft, plump cakes of Dutch origin, whose name literally means “oil cake,” fried in boiling oil and covered in sugar. They seem to be the true ancestors of donuts, brought to the United States by the colonisers of the Dutch empire: in fact, they provide the same dough and process but not the ring shape. Yet, despite the fact that today there are versions without a hole, more similar to krapfen or bombolotti, the typical image of the American donut is a ring: how did this shape come about?

Origin of the ring shape

There are many hypotheses about the hole in donuts and very few historical traces reveal clues. However, it’s worth telling the most popular of the legends in this regard, linked to Elizabeth Gregory, mother of a captain of a New England warship of the first half of the 19th century, worried about the poor sanitation and the state of health of the crew. To ward off scurvy, a disease caused by a strong lack of vitamin C, the woman created a dough in which she also mixed nutmeg, cinnamon and lemon peel, thus creating a batter capable of strengthening the immune system and chasing away ailments. But that wasn’t enough: to add an additional nutritional boost, Elizabeth also added walnuts and hazelnuts in the centre of the dough, which was however too heavy. During cooking, the central part remained uncooked and the people aboard the ship had to discard that piece of batter, thus giving life to the first ring shape.

Another certain fact: donuts began to spread in the States starting from World War I, when volunteer women in battle took care of sick soldiers by offering them donuts, also brought to the front to remind men of the taste of home. But to speed up the preparation of the pastries and start a production with higher numbers was Adolph Levitt, a refugee from Tsarist in Russia. In 1920 he created the first donut production machine due to the many requests of his customers who used to crowd in front of the pastry shop. Success was immediate: the taste of his donuts and their easy availability made them some of the favourite breakfast products for Americans, a tasty street food also mentioned in 1931 by the New Yorker, which praised the production of the Broadway pastry, describing the donuts that “float dreamily through a grease channel in a closed glass machine, walk on a mobile ramp and fall into the outgoing basket.” Ingenious machines for the time, which guaranteed Levitt a whopping 25 million dollars a year.

Birth of the Krispy Kreme brand

Still 1930s, North Carolina: French chef Joe LeBeau from New Orleans decides to sell his secret recipe for leavened donuts to one Vernon Rudolph, who rented a space in what is now historic Old Salem in Winston-Salem. Here, on July 13, 1937, he began selling his donuts to local grocery stores, but the scent emanating from the workshop was so intoxicating that passers-by started asking him to sell the hot donuts directly to them. Through a small window on the street Vernon thus began to serve his famous pastries: the sign was Krispy Kreme and still today it is one of the most famous donut (and coffee) chains in all of America, owned by the JAB Holding Company, a private label based in Luxembourg. An entrepreneurial history that began in the mid-Forties, when the number of stores increased, while remaining family-run. They all had the same recipe but everyone made donuts by hand from scratch, at least until a decade later, when Rudolph and his team invented a machine for their donuts.

Another successful US chain is Dunkin,’ created in 1948 in Quincy, Massachusetts, and initially called Open Kettle. It was invented by William Rosenberg, who sold donuts for 5 cents each and cups of coffee for 10, from 1950 under the new name Dunkin’ Donuts, a brand that aimed to “make and serve the freshest and most delicious coffees with donuts quickly and with courtesy in modern and well-marketed shops.” A philosophy that has remained at the base of the brand, easily recognizable by the orange and pink sign and its donuts capable of always remaining the same: perhaps not the most valuable, but standardised and well made, identifiable. Above all, an example of brilliant entrepreneurship, with a franchise that started in ’55 which, after only 10 years, could already rely on more than 100 stores around the country. Owned by Inspire Brands since 2020 and only renamed Dunkin’ since 2019, the company now boasts more than 12,000 stores in 42 countries and is the largest coffee and donuts chain in the world. 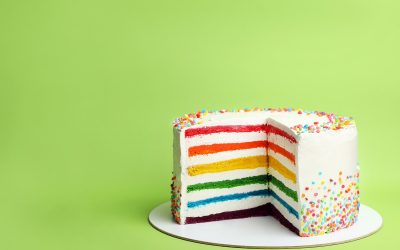 The most famous internet cakes, from cream tart to Nua