Darlington Market: street food sold in one of the UK's oldest covered markets 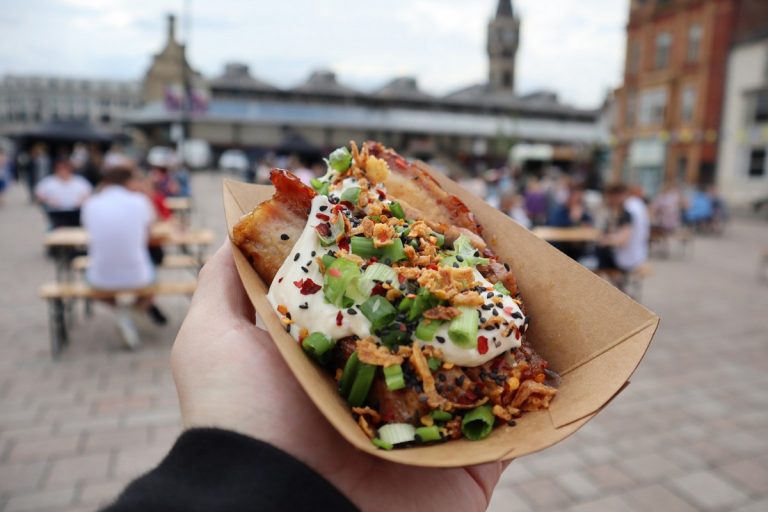 Pizza, burgers, wraps and goulash: it's all available at the renovated Darlington covered market, one of the oldest in the UK. A historic place that after more than 200 years changes its skin and becomes dedicated to street food.

Darlington, in County Durham, is one of the so-called "market towns," that is, villages or towns that, according to medieval European law, obtained permission to hold a market, a custom that's widespread in the United Kingdom but also in Scandinavia and throughout the Germanic area. Since 1864, it's one of the oldest covered markets in the country: Darlington Market. A place where one can find local delights, fresh fruit and vegetables, bread and all the best food shopping items. From the 27th of August 2021, after more than two centuries of history, the structure has been renewed, also giving space to street food stalls, from pizza to Thai food. The occasion was the start of the Darlington Food and Drink Festival.

From traditional market to gastromarket

What has always been one of the points of reference - and reasons for pride - for city life, therefore presents itself in a modern guise, with a more captivating look, while maintaining the original Victorian style design. After all, several architectural changes had already been made over the years, such as the elegant neo-Gothic design by Alfred Waterhouse, designer of Manchester Town Hall and the Natural History Museum in London. The original building, however, was an open plan, but it has been fenced in for some time to accommodate the vendors, who will now also host chefs and restaurateurs.

The food stalls and the bar

The offer is wide and varied, in line with the format of contemporary gastronomy markets: there is pizza, there are burgers, and also authentic Hungarian cuisine, with kebabs, wraps, goulash at the Taste of Budapest stand, which for the first time takes root in a fixed place: "My business has been on wheels for three years. It's family run, this is a great opportunity for us," said owner Sab Szilagyi. Then there is space for Thai dishes with Manao Thai, which brings the best of traditional street food to the English capital, while for a tasty and quick meal there are the wraps made by The Yorkie Wrap Co. In addition to the food vendors is also a bar with 150 seats where patrons can stop for a fine drink while listening to live music. In short, a market that aims to be firstly a space for sharing and a meeting point for the locals. A change that takes on an even deeper meaning in pandemic times, a hard period for the dining sector during which rediscovering the sense of conviviality becomes not only a challenge but a very necessary common project.