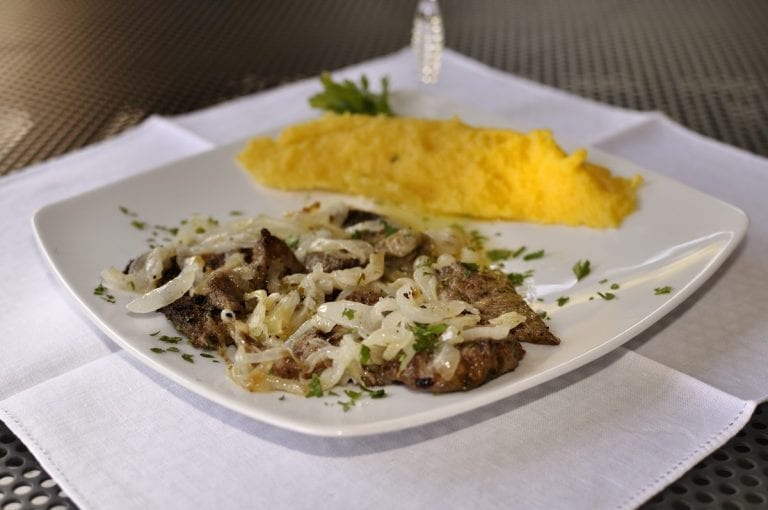 Tasty, with an intense flavour and pungent odour, liver is fundamental to many traditional Italian recipes: here are the ones not to be missed.

Liver in the kitchen and Italian recipes

Calves’ liver is the most widely consumed, but there are also pork, rabbit, goose and chicken livers. In any case, the liver is considered part of the animal offal, which includes the less valuable parts of an animal. Discarded by butchers, the entrails were originally exploited by the Romans, thanks to the “Vaccinari” (people in charge of skinning cattle) of the Testaccio slaughterhouse, who were the first to start eating these by-products that represented their pay. Depending on the species to which it belongs, liver has different dimensions and nutritional values. The richest in protein, vitamins and minerals is veal liver, which is why it is often recommended for pregnant women with iron deficiency. There are many uses for the product in the kitchen, historical recipes with a robust flavour and intense taste. Here you can find some of the most popular ones.

It is one of the most emblematic dishes of Veneto but its origins date back to the time of the ancient Romans, who used to combine figs with meat to cover the pungent smell. The fruits were then replaced by the Venetians with onions, more easily available in the territory and still today protagonists of the recipe. Tradition would like to use the white onions of Chioggia, but there are many variations of this historical preparation, interpreted in different ways depending on the area. Other essential ingredients are butter, oil, parsley and sometimes even vinegar, which was once used to hide the smell of the liver at a time when, without refrigerators, it was difficult to keep meat for long.

Very similar to the Venetian version, Genovese-style liver is also a winning combination with onions, which with their sweet taste combines well with meat. The main feature of the Ligurian recipe is the accompanying sauce: unfailing is in fact the agliata (aggiada in local dialect), a cream made from garlic, breadcrumbs, extra virgin olive oil and vinegar, according to many ancestor of pesto alla Genovese, which sees in fact in oil and garlic two of its main ingredients.

A specialty of French cuisine, goose liver pate was already appreciated by the ancient Egyptians, as evidenced by a fresco from 2500 BC. C. discovered in Sakkarah. Men where depicted intent on gobbling geese, a custom that was also widespread among the ancient Romans, who completed the cream with dried figs, milk and honey. Also in Italy there is a traditional version, but made with calf’s liver, and it is again a Venetian tradition: you stew the onion in a pan and add the liver cut into thin slices, then blend everything and leave the mixture to cool and solidify in a mold. It is generally served spread on slices of toasted bread, as an appetizer or a tasty snack during an aperitif.

Tuscany also has its own typical recipe for patè, in this case with chicken livers, which become a thick and delicious cream to spread on slices of toasted bread. The famous “crostino” is a must during the holidays and special occasions, the perfect start for any self-respecting lunch with friends and family. Everyone has their own recipe, but the basic ingredients are chicken livers, extra virgin olive oil, butter, white onions, sage, rosemary, capers, dry white wine (or Vin Santo), chicken broth, salt, pepper and anchovy paste. A tasty mix perfect for pairing with Tuscan sciapo bread.

Not unlike its close Venetian cousin, even the Vicenza-style flavoured liver sees in the white onions the winning pair for this tasty meat. The main difference between the two regional versions lies in the choice of the product used to shade the meat. The Vincentian people, in fact, prefer white wine to vinegar, and add it to the liver after having browned it over high heat together with stewed onions in butter. The whole is garnished with the chopped parsley.

In addition to the famous pâté to be spread on a crouton, in Tuscany, liver is also valued in the Florentine way: cooked in a pan with extra virgin olive oil and sage. Usually veal is used, although many peasant families, especially the poorer ones of the past, adapted the recipe with what they had available, often using chicken livers, cheaper and more readily available. In any case, the liver is cut into slices that are not too thin and first dipped in flour to make the preparation more creamy.

The name derives from the typical dress worn in the nineteenth century by bankers and high-finance men, among the greatest admirers of this dish made from beef and white meat scraps. However, the recipe was already present during the Middle Ages and the first written testimony is that of Master Martino, dating back to 1450. It was born as a poor dish, designed to recover offal, in particular calf and livers, to be cooked together with the veins in a pan with butter, then adding rooster’s crests and vinegar. Originally it was eaten as a second course, while today it is often used as a delicious and rich condiment for pasta.