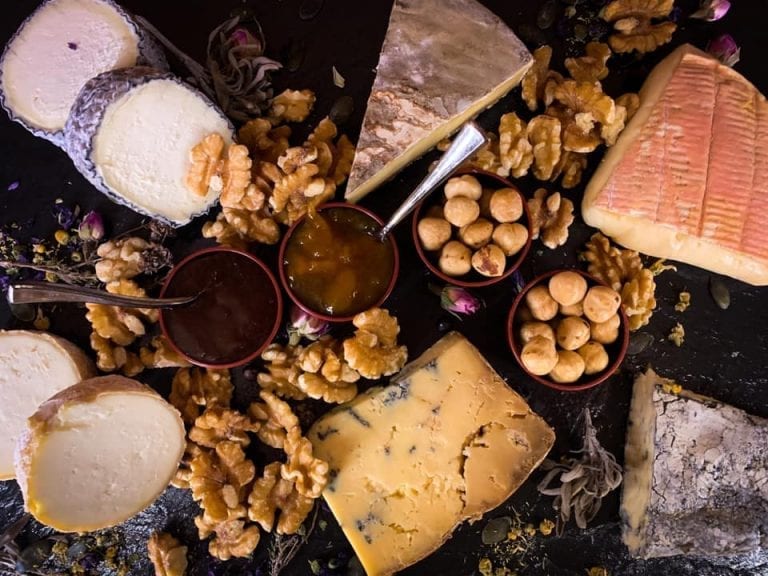 Honey, jams, jams. In search of the best combination with cheeses, with the advice of 5 big names in the dairy world: breeders, producers, refiners.

The cheese-marmalade pairing? “The risk is to hide what the producer wanted to say with their product”, explains Francesco Loreti (of Formaggeria di Roma): “because there are many cheeses, but only three ingredients: milk, salt and rennet. Moreover”, he adds, “there’s the cheesemaker hand (expertise)”. That plus the quality of the raw material, makes the difference. Milk processing, temperatures, aging in certain environments instead of others: each choice determines a different result, specific characteristics to be enhanced and not covered. In short, to use the words of a producer of cheeses and related specialities, such as Renato Brancaleoni from Romagna, “cheese must be tasted in its entirety.” In this way, you can feel all its characteristics: “who loves cheese and knows what he is eating, won’t add jam to it”, says Beppe Giovale of the Roman workshop that bears his name with determination. “Even though”, adds Vito Dicecca (refiner) “with jams you can bring those who are farthest away from the world of cheeses and perhaps educate the taste at the same time.” So, how do you combine it? “A good wine”, says Beppe, “and then a suitable bread, or maybe a boiled potato.” Between a bite and another, and even more between a cheese and another, better to intersperse with fresh fruits or vegetables, “a piece of apple, pear, celery, allows you to cleanse the palate”, explains Giuseppe Zen, who adds: “there is no technical reason to add sugar: it disturbs, covers everything else, It kills the flavors. If there is sugar, everything is good and nothing is good. ” In short, how much worse to fully enjoy a product as rich as cheese. This is especially true if you want to have a correct and professional approach. Then, however, where there is taste there is no loser, so everyone is free to give vent to their own imagination and personal tastes. Maybe get some advice from the people in charge.

Cheese jams according to Francesco Loreti

“Rule number one: the protagonist must always be the cheese” explains Francesco Loreti (from La Formaggeria), a very popular stall in the Roman market in Piazza Epiro, who adds: “it must be accompanied in a very soft way, for the rest there are no rules, personal taste prevails”. For the holidays, he had an Umbrian company make 6 sauces under the La Formaggeria brand. Packaged in single-serving jars “so you can finish them in an evening or two, without letting them wander around the house. . . “, he designed them to go with a cutting board, perhaps to be enjoyed in company: “I chose the basic ones” he explains simply.

Usually with blue cheeses you go with a muscat, so the idea is to look for something sweet, almost honeyed, even a citrus jelly or a berry jam. On pecorino cheese I would put honey, not too delicate as it can be an acacia, maybe a chestnut or eucalyptus in contrast to the taste of cheese. On mature cow cheeses, red onion is fine, which many are asking for, or daring mixes that combine more flavours, even important ones, such as pears and balsamic. On a fresh cheese, whether it’s a stracchino or a goat’s piece, I think of something sour, a gel of lemons or mandarins. There are many companies, by the way, that make these goat cheeses and enjoy themselves refining them, for example with blueberries. In the case of ricotta, honey with nuts is its death. With buffalo mozzarella? The best is with Cantabrian anchovies or a good oil, not senaped or spicy things that alter the taste of the cheese.

Cheese jams according to Renato Brancaleoni

With his farm, Fossa dell’abbondanza in Roncofreddo in the province of Forlì and Cesena, Renato Brancaleoni refines cheeses: pecorini di fossa, blue of Montefeltro, cerato di mucca piccola and many others. Not only that: with her daughter Anna he runs an organic farm – Casa Romagna – partly wooded, partly cultivated: olive trees, vines, orchard, cereals, but also small fruits, aromatic herbs, fragrant roses, vegetables and antique fruits. The same ones used for cheeses aging, as in the case of hay blue cheese or goat blue cheese with flowers and strawberries. For him, too, “cheese should be tasted in its entirety, without any combinations. ” He is categorical, but at the end he adds: “But if we want to play with the combinations we can have fun, I’ve tried many, I’ll give you three special recipes that we make”.

For goat’s cheeses: a wild strawberry jam with a hint of ground black pepper, for sheep’s cheeses, quince jelly with aromatic herbs. With vaccine cheeses, lemon jam with nutmeg.

Cheese jams according to Giuseppe Zen

One of the most esteemed and versatile selectors in Italy, Giuseppe Zen has created a stronghold of goodness in the Darsena Market: meat, bread, and then cheese; all sought, chosen and proposed with a rigor, a competence and a vision that rarely happens to meet. Artifact of that legendary Mangiari di strada who cleared customs in Milan specialities and fifth quarter from half Italy, in his shops of wonders – Macelleria Popolare, Bakery Italian, R(esistenza) Casearia – opens the doors to rare products, often unavailable, and dispenses knowledge and flavors to anyone who visits him. For him, without mincing words, : “mustard or chutney are great, but for cartridge, muscle, mixed boiled. ” I mean, not with cheese, “that’s a modern rudeness. ”

Going, for example, from blue to crescenza, I don’t need jams, honeys or mustards, but something that cleanses and refreshes my palate, like with fresh fruit or vegetables. Just follow popular wisdom: don’t let the farmer know how good cheese is with pears, not with mustard. At best you can think about nuts, walnuts and almonds, or pears – maybe a Martin Sec – freshly cooked in a wine syrup. But I’m not for the kitchen to beat, I’m for the kitchen to lift. So I would remove sugar and sweet: where you want to put a pumpkin mustard, bread and pumpkin, or bread with leek sweetened in butter: think about different breads depending on the cheese instead of jams. The only combination I feel like giving you is with mascarpone, which is not a cheese, it’s cream. If you want to eat endlessly, here is a subscription of pleasure and pure enjoyment, which serves you to send down endless acidified cream combined with fugassa, that kind of panettone with icing: quince mustard and a piece of fruit senapata, allows you to eat mascarpone until you die.

Cheese jams according to Beppe Giovale

Producer and refiner (with his company – Giovale Formaggi di Giaveno, in Val di Susa), breeder and great shopkeeper, Beppe Giovale is an institution in Rome. His shop – Beppe e i suoi formaggi – in the old Jewish quarter, is a place of pilgrimages, a place of tasting, tasting, meeting, acquaintance. For him too, the top, to taste cheeses and perceive their nuances and complexity, is to taste them nature. But for those who like to compose their palette of flavors, there is a free hand here: “there is no rule about matching, we are open to what customers ask, and they ask us for anything. ” Fruit or wine jellies, senapate sauce, honey. But what she loves the most is the pumpkin and ginger jam “leaves the mouth cleaner, you don’t clutter up. ”

With fresh cheeses I recommend honey with berries, with ricotta cheese wild blueberries,, sterilized in a jar and no added sugar. With semi-matured cheeses, I think of a white wine jelly, for example Arneis, or pumpkin and ginger jam that goes well with toma mansueta, while with yellow toma, we combine a fig and walnut jam, while extra-old sour milk toma goes well with balsamic vinegar jelly. With seasoned meats, mustard pear sauces and quince on blue cheese. Then the chapter of honeys opens, some have nuances that enhance those of the cheeses, as in the case of sour milk toma with rododentro or castelmagno di Asfodelo honey that is dry. Honey is good to compensate for a piece otherwise difficult to swallow.

Cheese jams according to Vito Dicecca

Cheesemaker, son of art, great refiner, free mind. Vito Dicecca has brought a breath of fresh air to the world of cheese, his Apulian blue cheese is a real object of desire, as rare as precious things are. You’ll see some that look like cakes, thanks to refinements that are always different but always equally extraordinary, creating sumptuous parables of flavours, but even his fresh cheeses – one above all nodini d’amore – are an experience worth having. As a true cheese lover, even for him the ideal is to enjoy them in purity, but of course the personal taste of each prevails.

Jams are useful to bring people closer to the world of cheese, especially blue cheeses: many are afraid of them, even before tasting them they think they are too strong. Jam may convince them to try it. However, I wouldn’t pair them with aged cheeses, I don’t see the point: they already have a soul of their own. For the rest I am a purist: at home I prefer to eat one at a time, whether it is a burrata or a pecorino cheese, or something else, but only one, a bit like wine, even if you are an expert if you try too many at once you lose the taste. If I had a restaurant I wouldn’t serve more than 3 or 4 types: starting with a pasta filata, passing through a pecorino and ending with a blue cheese; if they are of the highest quality, they are enough. And they should be paired with equally high quality jams.

Out of all the jams I’ve tried, the only one that goes well with it is figs jam. So we studied and made it ourselves: an extra jam of figs with almonds with very little sugar – not even 2% – nor citric acid nor pectin: just figs, lemon juice, Turitto Filippo Cea almonds. I pair it with my goat brie, so I make it more lovable, tone down the more acidic notes, for those who don’t like them. With goat’s blue cheese I’ll pair it only with acacia honey, the least intrusive, so the cheese doesn’t lose its structure. And that’s when I substitute it for dessert.